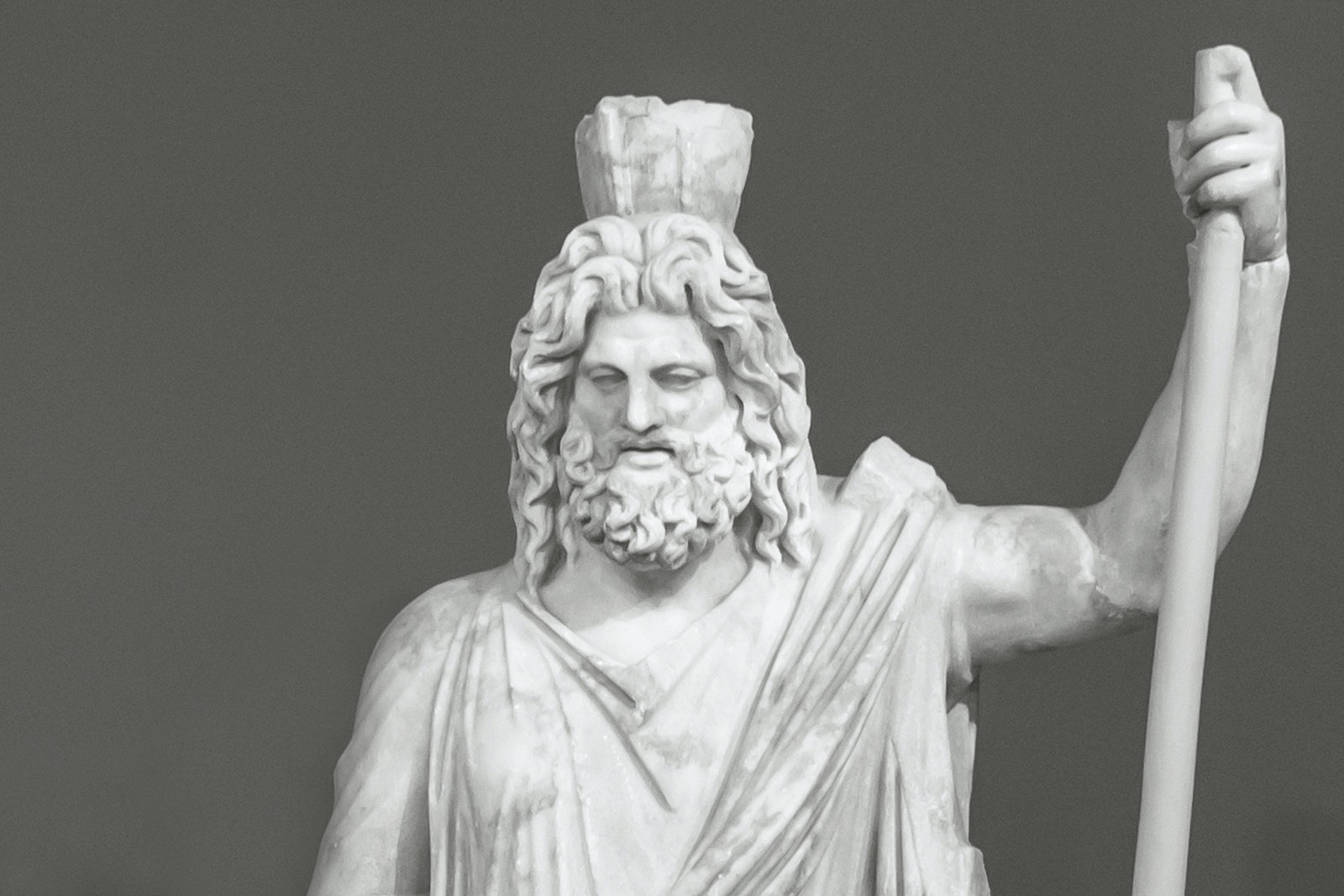 The foremost of the Roman chthonic (“subterranean”) deities, Pluto was god of the dead and lord of the underworld. A figure of enormous dread and terrible might, Pluto dispensed luck and controlled the fates of all mortals. As commander of the subterranean realms, he was the master of ores, metals, and the precious stones found within them. For this reason, he was celebrated by many as the bringer of wealth. Pluto was the Roman counterpart to Hades, the Greek deity who ruled the underworld of the same name.

The crystallization of Pluto’s identity as the Roman god of the dead, the underworld, and wealth reflected a complex historical development. Pluto’s identity was largely comprised of elements taken from two distinct entities: Hades, a Greek deity, and Plouton, the lord of wealth. The latter was a Dīs Pater, a deity worshipped by early Romans for his power over the underworld and mineral wealth. In some mythographic and historiographic traditions, the name Dīs Pater was used in lieu of the name Pluto; evidence suggests that the Romans used these identifiers interchangeably.

The name “Pluto,” rendered as Plūtō in the Latin, was derived from the Greek name Plouton, meaning “the wealthy one.” This name was an aspect of the deity Hades, one that highlighted his control over subterranean sources of mineral wealth. The name was also rooted in the ancient Greek noun ploutos, meaning “wealth” or “riches.”

Dīs Pater, another of Pluto’s names used widely by early Romans, was ultimately derived from the Proto Indo-European words meaning “god” and “father." In Latin, the words were deus (god) and pater (father). Extremely similar names (Diespiter and Dispiter) were given to Jupiter, the greatest of the Roman gods; the similarity of these titles suggested that Dīs Pater (i.e. Pluto) was originally an aspect of Jupiter. In time, this aspect became independent of Jupiter and eventually merged with the Hellenic god Hades.

Pluto was the lord of the subterranean underworld, which in Roman mythology served as the resting place of departed souls. He lived underground in a gloomy palace, and seemed to have little interest in the world of men. Likewise, Pluto seldom involved himself in godly affairs. He rode a chariot, carried a staff, and was often depicted wearing a warrior’s helm. Pluto was often accompanied by Cerberus, a three-headed hound that served both as his pet and guardian of the underworld.

Pluto’s parents were Ops, goddess of the earth, and Saturn, ruler of the cosmos. His brother Jupiter—the mightiest of all gods—freed Pluto and his siblings from their father’s wrath. These siblings included Neptune, lord of all waters, Juno, the matron goddess, Vesta, guardian of hearth and home, and Ceres, a fertility goddess associated with agriculture.

Though Pluto lived alone in the gloomy places beneath the earth for much of his life, he eventually came to share his realm with another—Proserpina, the daughter of Ceres and Jupiter. While Greek and Roman traditions insisted that Pluto had children, there was little consensus about who they might have been. Among the most popular candidates were the goddesses known as the Eumenides (or Furies)—deities of vengeance who lived in the chthonic darkness.

Pluto and the Rape of Proserpina

One of Pluto’s most famous myths centered on his abduction of Proserpina and the grief it unleashed upon her mother, Ceres. Pluto was a lonely deity who lived in the gloomy underworld and seldom encountered others. Taking pity on him, Venus told her son Cupid to fire one of his love arrows at Pluto so that he might become smitten with the next woman he saw. That woman was Proserpina, who was frolicking in fields of Nysa. Seized with irrepressible desire, Pluto flew forth upon his chariot, abducted Proserpina, and carried her away, leaving naught behind but a bow the girl had used as a belt. The scene—one of the most famous in ancient literature—was rendered beautifully by the poet Ovid in his masterwork the Metamorphoses:

Here, while young Proserpina, among the maids,
Diverts herself in these delicious shades;
While like a child with busy speed and care
She gathers lillies here, and vi’lets there;
While first to fill her little lap she strives,
Hell’s grizly monarch at the shade arrives;
Sees her thus sporting on the flow’ry green,
And loves the blooming maid, as soon as seen.
His urgent flame impatient of delay,
Swift as his thought he seiz’d the beauteous prey,
And bore her in his sooty carr away.
The frighted Goddess to her mother cries,
But all in vain, for now far off she flies...
O’er hills, the ravisher, and vallies speeds,
By name encouraging his foamy steeds;
He rattles o’er their necks the rusty reins,
And ruffles with the stroke their shaggy manes.
O’er lakes he whirls his flying wheels, and comes
To the Palici breathing sulph’rous fumes.1

Following Proserpina’s abduction, Ceres searched high and low for her missing daughter. Her search was in vain, however, for she did not know that Proserpina had been taken to Pluto’s “realms of night.”2 There she became the unwilling bride to Pluto, who contentedly refused to acknowledge the kidnapping.

As she continued her search, Ceres began to waste away. In her sorrow, she neglected her oversight of the growth of crops and the fertility of domestic animals. As the world became barren, the other gods decided that they must intervene. The messenger god Mercury, who could travel freely between the worlds of the living and the dead, spied Proserpina in Pluto’s possession and quickly informed Jupiter. The king of the gods approached his brother and ordered him to release Proserpina at once, lest he suffer the wrath of Jupiter.

Seeing that he had no choice, Pluto consented to return the girl, so long as she had refused all sustenance in the underworld. When it was discovered that Proserpina had consumed a few pomegranate seeds, Pluto demanded that Proserpina remain with him for some time each year. Jupiter agreed, ordering that the girl would spend half her time with Ceres on the surface and half with Pluto in the underworld. Her absences from Ceres correspond to the annual seasons—when Proserpina departs at the beginning of autumn, Ceres mourns and living things cease to grow; when she returns at the beginning of spring, Ceres beams and the world blooms. As Ovid put it:

Jove some amends for Ceres lost to make,
Yet willing Pluto shou’d the joy partake,
Gives ’em of Proserpina an equal share,
Who, claim’d by both, with both divides the year.
The Goddess now in either empire sways,
Six moons in Hell, and six with Ceres stays.
Her peevish temper’s chang’d; that sullen mind,
Which made ev’n Hell uneasy, now is kind,
Her voice refines, her mein more sweet appears,
Her forehead free from frowns, her eyes from tears,
As when, with golden light, the conqu’ring day
Thro’ dusky exhalations clears a way.
Ceres her daughter’s rape no longer mourn’d,
But back to Arethusa’s spring return’d;
And sitting on the margin, bid her tell
From whence she came, and why a sacred well.3

Another prominent tale in Pluto’s mythos involved the figure of Orpheus, a musician and mystic known in the Greek world for founding a cult known as the Orphic Mysteries. In most traditions, Orpheus was the mortal son of Apollo (a deity the Romans shared with the Greeks). As a musician of great renown, Orpheus could both seduce and persuade others with the power of his music. He was often portrayed as a master of the lyre, which he would use to put listeners into trance-like states.

One day, Orpheus’ lover Eurydice stepped on a viper and died. In his despair, Orpheus played music that was so beautiful it made the gods weep. Inspired by this turn of events, Orpheus resolved to win Eurydice back by playing his music for Pluto and Proserpina in the underworld.

He thus journeyed to Pluto’s “realms of night” and sought an audience with the king and queen of darkness. Pluto and Proserpina were so moved by Orpheus’s music that they consented to return Eurydice to him—on one condition. As he left the underworld with Eurydice, he was to walk in front of her, never turning around to view his lover until they had made their way to the surface. Just as they were about to cross the threshold, however, Orpheus was seized with the fear that Pluto had deceived him and turned around to confirm Eurydice’s presence. In turning to see her face, Orpheus broke his contract with Pluto and doomed his lover to the gloom of the underworld for all eternity.

By virtue of his centrality to the myth of Orpheus, Pluto became enshrined in the Orphic Mysteries. He was celebrated in the Orphic Hymns (written anonymously in the first and second centuries CE), where he was presented as a leading deity, the “terrestrial Jove”—that is, the Jupiter of the earth—whose bounty and generosity nourished mankind:

PLUTO, magnanimous, whose realms profound
Are fix’d beneath the firm and solid ground,
In the Tartarian plains remote from fight,
And wrapt forever in the depths of night;
Terrestrial Jove, thy sacred ear incline,
And, pleas’d, accept thy mystic’s hymn divine.
Earth’s keys to thee, illustrious king belong,
Its secret gates unlocking, deep and strong.
’Tis thine, abundant annual fruits to bear,
For needy mortals are thy constant care.4

Due to his mysterious nature and association with death, Pluto was not a central figure of worship in the Roman state religion. No state festivals were held in his honor. Though this seems a strange omission, it may have represented a concession to the mystery religions, such as the Orphic Mysteries discussed above, which placed the god in high esteem.

The name of the Roman god of the underworld resonates today in the name of the planetary object, Pluto, formerly the ninth and final planet in the solar system (now demoted to the status of dwarf planet). Discovered in 1930 by the American astronomer Clyde Tombaugh, Pluto resides in the Kuiper Belt at the edge of the solar system beyond Neptune. The name “Pluto” was suggested Venetia Burney, an eleven-year-old Roman mythology. The board members of the Lowell Observatory then selected it from a list of names that also included Minerva and Cronus.

The name was later used by the animator Walt Disney, who gave it to Mickey Mouse’s pet dog Pluto.