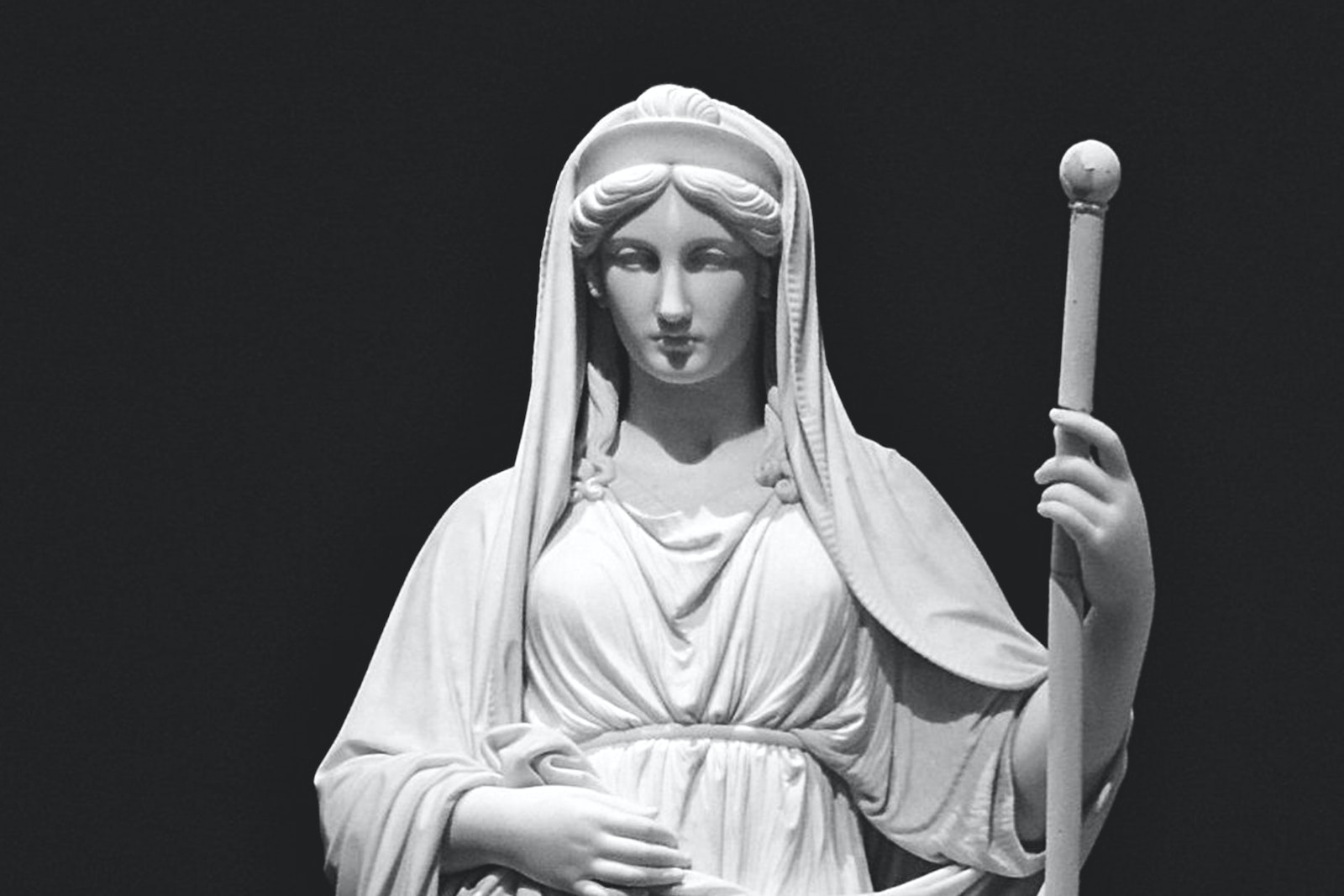 The goddess of the hearth and home, Vesta was a Roman deity that symbolized faith, family, and domestic order. Often known simply as Mater, or “Mother,” Vesta was recognized as the purest of Roman deities. An eternal virgin, Vesta inspired her priestesses, known as the Vestales (or Vestal Virgins), to adhere to a strict code of celibacy. Vesta was adapted from the Greek deity Hestia, with whom she shared many characteristics.

A leading deity in the Roman pantheon, Vesta was a truly ancient deity with a history that could be traced back to the founding of Rome itself. Though she was beloved by all common people, she had a special relationship with women, who unlike men were allowed access to her temple in the Roman Forum. Vesta was also a patron to millers and bakers. She was often represented by the donkey, which turned the millstone, and the kettle, which provided nourishment. Vesta was largely seen as an uncontroversial figure who seldom engaged in the drama that defined so much of the Roman pantheon. As a result, she was usually absent from Roman mythology’s more colorful tales.

The name “Vesta” was rooted in the Proto Indo-European *wes, meaning “to dwell,” or “stay.” Vesta’s name, then, appeared to reference the goddesses’ association with the hearth and home. “Vesta” was also clearly a cognate of “Hestia,” the name of the Greek goddess on whom Vesta was based. The relationship between the Greek and Roman deities was recognized by the ancients. As the Roman orator Cicero wrote in De Natura Deorum: “The name Vesta comes from the Greeks, for she is the goddess whom they call Hestia. Her power extends over altars and hearths, and therefore all prayers and all sacrifices end with this goddess, because she is the guardian of the innermost things. Closely related to this function are the Penates or household gods [of the Romans].”1

Vesta oversaw the home and family life, ensuring the sanctity of the house and securing its tranquility. Despite her seeming lack of mythological presence, Vesta’s enormous power over family, marriage, and children protected the moral integrity of all Romans. For this reason, all prayers and sacrifices began and ended with devotions to Vesta.

Vesta was a daughter of Saturn, ruler of the cosmos before Jupiter, and Ops, the divine incarnation of Earth. Alongside her siblings, she served as a member of the original Roman pantheon. Her brothers were Jupiter, king of the gods, Neptune, god of the seas, and Pluto, lord of the underworld. Her sisters were Juno, goddess of marriage and children, and Ceres, goddess of fertility and agriculture.

Vesta remained a virgin throughout her mythic existence. She took no lovers, and bore no children.

A boring and often prudish figure, Vesta seldom graced the tragicomic stories of Greco-Roman tradition. Her being was instead appreciated through the lived experience of her worshippers.

In the Roman tradition, Vesta was born shortly before Jupiter wrested control of the cosmos from his father Saturn. A jealous deity at heart, Saturn was fiercely protective of his power. Shortly after impregnating his wife Ops, Saturn learned of a prophecy predicting that one of his children would overthrow him just as he had overthrown his own father. In an effort to thwart the prophecy, Saturn swallowed each of his first five children as they emerged from the Ops’ womb. Vesta was one of these children.

Horrified by Saturn’s actions, Ops defied her husband and hid her final child—Jupiter. In his place, Ops gave Saturn a rock dressed in the swaddling clothes of a newborn child. He promptly ate the "child," but could not digest the rock and soon vomited up both the rock and the five children he had swallowed. Saturn’s children joined forces with their brother Jupiter and overthrew their tyrannical father. Afterwards, they established a new regime and divvied up the responsibilities amongst themselves.

A story told in Ovid’s Fasti concerned Vesta’s virginal purity and those who would claim it. One night, Vesta attended a dinner party hosted by Cybele, a mother goddess. All the gods and goddesses were there, as was Silenus, a wizened teacher and tutor to Bacchus who was also a lush. Everyone had a lovely time, and by the end of the night most of the guests were drunk—Silenus included. In his stupor, the teacher left his donkey untied.

Vesta, meanwhile, had retired from the party to find a comfortable place to lay her head. According to Ovid, “Vesta lay and carelessly took her peaceful rest, just as she was, her head low laid and propped upon a sod.” Vesta was soon discovered in this state by Priapus, a lusty nature deity who often sported an enormous erection. As Ovid wrote:

But the ruddy guardian of gardens courted nymphs and goddesses, and to and fro he turned his roving steps. . . . He conceived a wanton hope, and tried to approach her furtively; he walked on tiptoe with throbbing heart.2

Priapus resolved to rape the vulnerable Vesta, but as he closed in to commit the act, Silenus’ wandering donkey happened to bray loudly. An alarmed Vesta awoke and screamed for the other gods, who rushed to the scene as quickly as they could. They scolded Priapus and forbade him from ever joining their celebrations again. Happily, Vesta preserved her virginity.

Vesta and the Roman State Religion

Vesta worship can be traced as far back as the founding of Rome (believed to be 753 BCE). Though the household was the principal site of Vesta worship, there was a temple dedicated to the goddess as well. Located in the Roman Forum, the Temple of Vesta housed the ignes aeternum, a sacred eternal fire that would burn for as long as Rome prospered.

Vesta’s priestesses were known as the Vestales, and their chief ecclesiast was known as the Vestalis Maxima. Sworn to virginity under penalty of death, the Vestales tended to the Temple of Vesta—they alone were permitted entry—and maintained the eternal flame. They were drawn from the patrician class (Roman aristocracy), and lived together in a complex called the Atrium Vestae.

Vesta’s chief festival was the Vestalia, a weeklong celebration held each year from June 7–15. During the Vestalia, barefoot maidens formed a procession leading to the Temple of Vesta, where they would make offerings to the goddess. The Vestalia was enormously popular—after the rise of Christianity in the Roman Empire, it remained as the last public festival to celebrate a pagan deity. When Theodosius finally abolished the celebration in 391 CE, his decision was met with public disapproval and unrest. Coelia Concordia, the last Vestalis Maxima, gave up her title in 394 CE, thus ending over one thousand years of unbroken tradition.