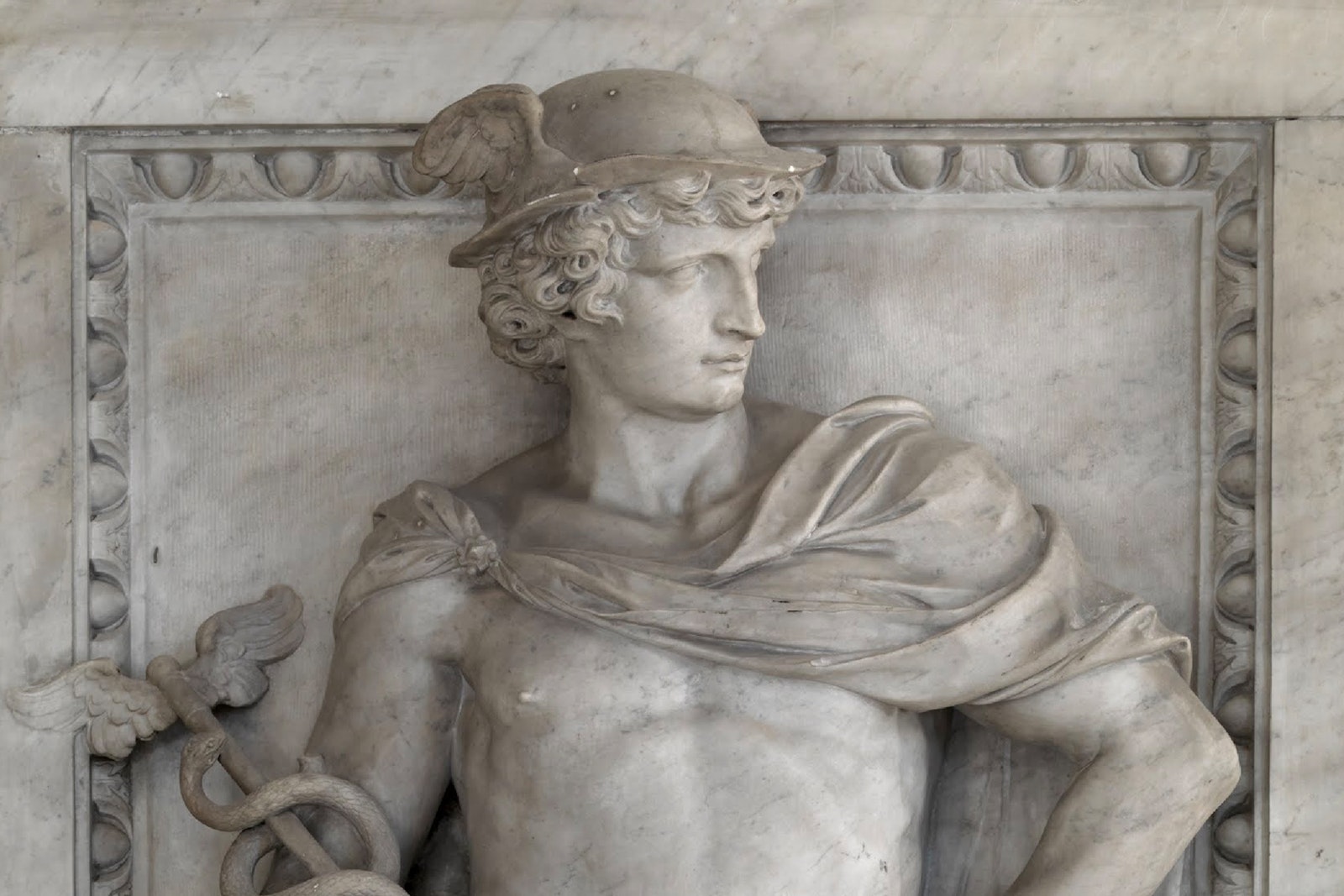 A wily trickster, Mercury was the Roman god of commerce, communication, and travel. The patron of thieves, messengers, and merchants, he was also responsible for conveying souls to the underworld. As the chief messenger of the gods, Mercury controlled the flow of information, and often used this position to his advantage.

Like Hermes, the Greek god on whom he was based, Mercury challenged moral (and physical) boundaries. He was often nude, and was the only god in the Roman pantheon who could freely cross into the underworld. He possessed a winged helm that allowed him to fly and carried the potent caduceus, a wand with serpents wrapped around it; this latter symbol was frequently confused with the Rod of Asclepius.

Though Mercury did not join the Roman pantheon until the third century BCE, he nevertheless became a major figure in Roman religion. Because of his likeness to deities of other Mediterranean and European groups, Mercury was easily assimilated into cultures that were conquered by the Romans.

The name “Mercury” (or Mercurius) probably emerged from the Latin merx, a noun meaning “merchandise.” In its verb form, the word mercari meant “to trade.” A deeper root in the Proto Indo-European language may have been merk- or merg-, meaning “boundary” or “border,” respectively. Mercury, then, was “the merchant” or “the keeper of boundaries.”

As the chief messenger of the gods, Mercury controlled the movement of all things—goods, ideas, words, and people. Mercury was usually depicted in a nude, beardless youth, though he occasionally wore a short tunic and a cloak fastened around his neck. He wore winged shoes and flew with the help of a winged helm that Vulcan, the god of forge and fire, had fashioned for him. This winged helm soon became synonymous with the messenger god. Mercury also carried the caduceus, a staff wound with serpents that was gifted to him by Apollo. Mercury was swift and clever, and his knowledge of major events often bordered on foresight.

Mercury was the child of Jupiter, king of gods, and Maia, a nymph and one of the daughters of Atlas, who were known as the Pleiades. Though Mercury was the only child of that union, he had many half-siblings by way of Jupiter. Among them were Vulcan, the god of forge and fire, Minerva, the goddess of wisdom and forethought, and Proserpina, the daughter of Ceres who was abducted by Pluto and taken to the underworld. Proserpina would later be recovered, thanks in part to Mercury’s efforts.

Mercury’s best known consort was Larunda, a naiad nymph whose tongue was cut off by Jupiter. According to Ovid’s Fasti, Mercury and Larunda had two children—nameless deities known only as the Lares. Like their father, the Lares served as guardians of the crossroads.

As the Roman version of Hermes, Mercury was known for his other lovers too. Mercury’s affair with the beautiful Venus produced an androgynous child known as Hermaphroditos. Later in life, Hermaphroditos would merge his body with that of his female lover, thus becoming a single entity with both male and female genitalia. In Greek mythology, Mercury took male lovers as well, including the hero Perseus.

Due to his late entry into the Roman pantheon, Mercury lacked a proper origin myth. He emerged in the mythological tradition as a freewheeling personality who produced as many problems as he solved.

#Mercury, a Trickster and a Thief

Mercury’s mischief was on full display in a tale from Ovid’s Metamorphoses. In this cruelly humorous story, an old peasant named Battus caught the trickster god in a compromising situation. One day, Mercury stole a herd of cattle and hid them in a nearby forest. Battus, meanwhile, watched the scene unfold from across the field. Seeing that Battus knew his secret, Mercury made him swear never to speak of the incident and to claim ignorance if anyone asked. Battus agreed.

Though Mercury took his leave, his trickery had just begun. To test the old man, he transformed himself into the figure of a country swain. He went to Battus and inquired about the herd, promising a healthy young bullock and heifer in exchange for retrieving the cattle:

The God withdrew, but strait return’d again,
In speech and habit like a country swain;
And cries out, ‘Neighbour, hast thou seen a stray
Of bullocks and of heifers pass this way?
In the recov’ry of my cattle join,
A bullock and a heifer shall be thine.’1

Tempted by this prize, Battus neglected his earlier vow and eagerly told the disguised Mercury what had transpired. A smiling Mercury revealed himself to Battus and transformed the old man into stone.

The peasant quick replies, ‘You’ll find ’em there In yon dark vale’; and in the vale they were. The double bribe had his false heart beguil’d: The God, successful in the tryal, smil’d; ‘And dost thou thus betray my self to me? Me to my self dost thou betray?’ says he: Then to a Touch stone turns the faithless spy; And in his name records his infamy.2

A similar story featured Mercury stealing cattle from Apollo. When Apollo learned of the theft, he approached Jupiter and asked him to settle the feud. Jupiter called Mercury and Apollo together and order Mercury to return the stolen cattle. In the midst of these proceedings, Apollo noticed that Mercury was carrying a funny-looking, stringed musical instrument. This was the first lyre, an instrument Mercury had crafted from a turtle shell and tendons. Apollo took a liking to the instrument and allowed Mercury to keep the herd in exchange for the lyre, a deal which Mercury accepted. Apollo would eventually master the lyre and become one of the world’s greatest musicians.

For all his wiles, Mercury could be genuinely helpful, too, and came to Jupiter’s assistance on more than one occasion. In one popular story, Jupiter fell in love and sired a child with Io, a young mortal priestess of his cult. Jupiter’s wife Juno found out about the affair, however, and decided to kill Io for her transgressions. Jupiter disguised Io as a cow in an attempt to shield her from his wife’s wrath, but the respite was short lived. Juno discovered the trick and sent Argus, a monster with a hundred eyes, to watch over Io’s herd. Running out of options, Jupiter asked Mercury for help in dispatching Argus. Mercury obliged, playing music on his pipes and telling boring stories to lull Argus to sleep. Once the monster was unconscious, Mercury murdered him and whisked Io to safety.

Mercury also lent his assistance to Jupiter and Ceres in the search for Proserpina. The daughter of Ceres, Proserpina was abducted by Pluto, the god of the underworld, who had fallen in love her. Heartbroken, Ceres searched far and wide for her missing daughter. Using his ability to cross freely into the underworld, Mercury eventually found Proserpina with Pluto. He reported the news to Jupiter, and the king of the gods ordered Proserpina’s safe return.

When the gods found out that Proserpina had eaten pomegranate seeds in the underworld, Jupiter and Pluto agreed that she would have to split her time between the realms of the living and the dead. Naturally, Mercury was called upon to escort Proserpina to and from the underworld; the messenger god faithfully carried out this duty whenever it was required of him.

#Mercury and the Roman State Religion

Mercury was a significant figure in Roman religion whose persona evolved over time. While Mercury’s earliest temple was established in the fifth century BCE, the characteristics of this early incarnation were unclear. This version of Mercury was likely a Romanization of the Etruscan god known as Sethlans. With the rise of Hellenic culture in Rome in the third century BCE, Mercury emerged more clearly as a Romanized version of Hermes.

Mercury’s festival, Mercuralia, was celebrated each year on May 15th. During this festival, merchants and seamen extracted water from Mercury’s sacred well at the Porta Capena and sprinkled it onto both themselves and their cargo for luck.

Compared to other gods and goddesses, Mercury has maintained an incredibly lively presence in popular culture. The speedy god is best remembered for the planet named after him. Mercury is the closest planet to the sun, and also the one with the quickest orbit around the sun. Mercury also lent his name to NASA’s first manned space program; the object of this program was to put a man into orbit around the planet.

The chemical element "Mercury" also bore the name of the messenger god. Also known as quicksilver due to its liquid state at room temperature, mercury could easily transition into other compounds. It was often used in mining to extract gold and silver from various ores.

Mercury’s name resonated in other areas as well. From 1938 to 2011, the Ford Motor Company devoted an entire division to its Mercury line. The brand’s first logo was a profile image of Mercury wearing his winged helm. Mercury Records, a famed record label, also used Mercury’s helm as a logo.

The DC comic book character known as the Flash also referenced Mercury. The Flash moved with incredible speed, and was dressed in a red costume. Notably, the Flash’s costume featured a pair of small wings on the sides of his forehead.