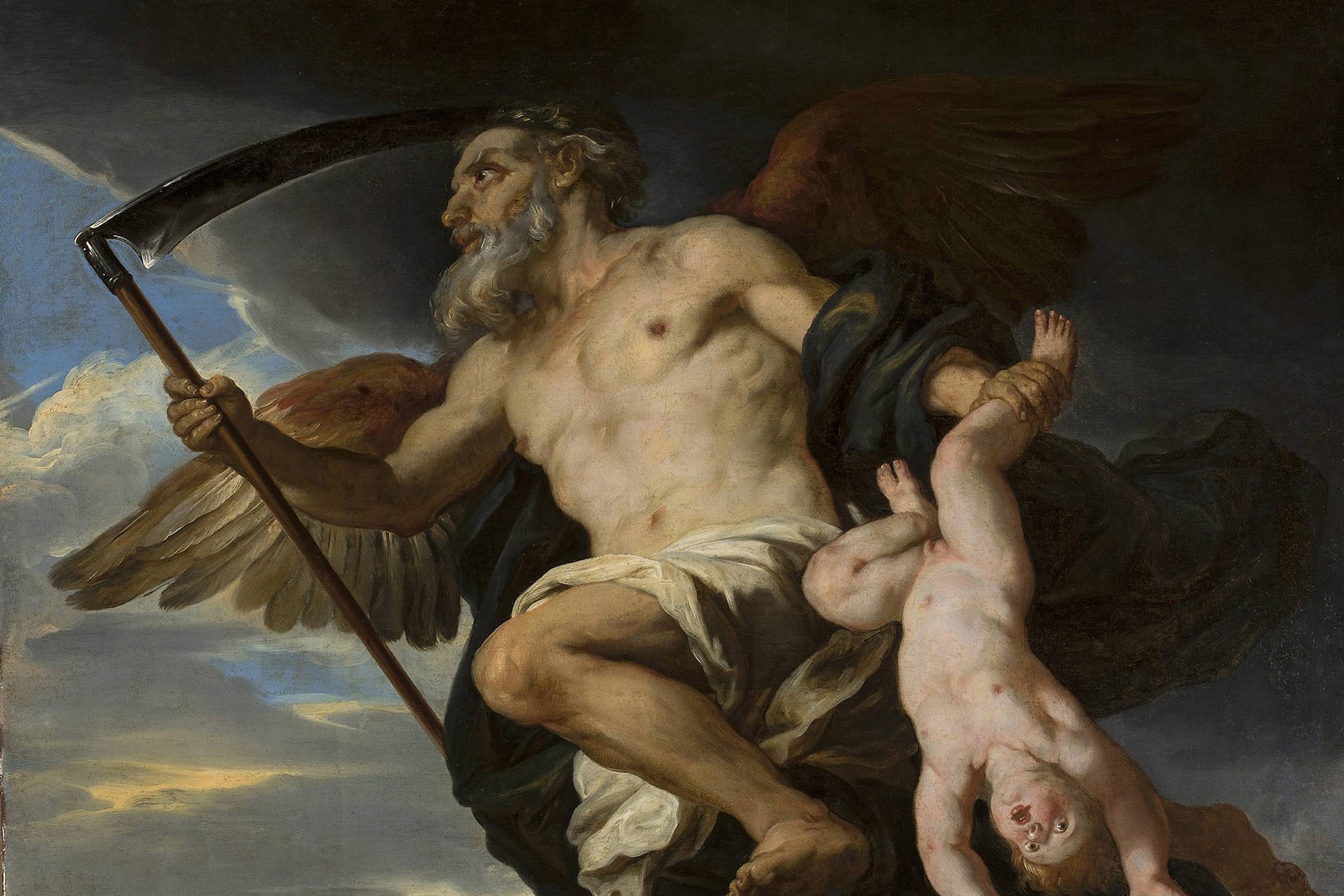 The second ruler of the Greek cosmos, Cronus was a Titan known both for his cruelty and for usurping his father Uranus. Cronus fathered the first of the Olympian deities, including Demeter, Hades, Hera, Hestia, Poseidon and Zeus. Insatiably cruel and hungry for power, Cronus was ultimately deposed by his son Zeus, who ushered in the era of the Olympians.

In Greek art, Cronus was often depicted wielding a sickle, a symbol of his rebellion against his father as well as his ties to fertility and agriculture. The Greeks of ancient Attica and Ionia celebrated Cronus during the Kronia, a harvest festival featuring both the indulgent consumption of food and drink and the mixing of social classes. In the Roman world, Cronus was known as Saturn.

While the origin of the name “Cronus” remains uncertain, one theory suggests it was rooted in the Proto-Indo-European ker- via the Greek word keiro, meaning “to cut.” Such an origin would likely allude to Cronus’s severing of his father’s genitals.

Cronus’s association with time, popularized during the Renaissance, was purely accidental. It emerged as a product of the similarities between the name “Cronus” and kronos, the Greek word for time.

As wily as he was strong, Cronus was powerful enough to outmatch his father. He wielded a sickle (or scythe), and was thought to hold sway over fertility and agriculture. In later eras, Cronus was often depicted as "Father Time," an old man with a scythe who controlled the passing of the seasons.

Cronus’s father was Uranus, the god of the heavens who ruled with an iron fist. His mother, Gaia, was not only the personification of the earth, but also the first deity in existence. Uranus and Gaia had twelve children known as the Titans: Oceanus, Coeus, Crius, Hyperion, Iapetus, Theia, Rhea, Themis, Mnemosyne, Phoebe, Tethys, and Cronus. Of all their children, Cronus was the youngest.

Cronus was also siblings with the one-eyed Cyclopes—Brontes, Arges, and Steropes—and the Hecatoncheires—Kottos, Briareos and Gyges, monstrosities with a hundred hands each.

In time, Cronus and his sister Rhea sired the gods that would eventually form the core of the Olympian dynasty: Demeter, Hades, Hera, Hestia, Poseidon and Zeus.

Cronus’s triumphant rise to power and his spectacular fall from glory were cornerstones of Hesiod's Theogony. The last child of the primordial deities Uranus and Gaia, Cronus was born into strife caused by his father’s paranoia and jealousy. Convinced that his children would one day rebel against him, Uranus imprisoned them in Tartarus, a hellish realm deep within the earth.

Distraught by Uranus's tyranny, Gaia urged her children to rebel against their wicked father. When she offered them a flint sickle in the hopes they might take up arms, only Cronus answered her call. Hesiod described this exchange in the Theogony:

‘My children, gotten of a sinful father, if you will obey me, we should punish the vile outrage of your father; for he first thought of doing shameful things.’ So she said; but fear seized them all, and none of them uttered a word. But great Cronos the wily took courage and answered his dear mother: ‘Mother, I will undertake to do this deed, for I reverence not our father of evil name, for he first thought of doing shameful things.’ So he said: and vast Earth rejoiced greatly in spirit, and set and hid him in an ambush, and put in his hands a jagged sickle, and revealed to him the whole plot.1

The “plot,” as Hesiod refers to it, was as simple as it was severe. Cronus was to surprise Uranus, overpower him with the help of his fellow Titans, and sever his genitals with his flint sickle:

Then the son from his ambush stretched forth his left hand and in his right took the great long sickle with jagged teeth, and swiftly lopped off his own father's members and cast them away to fall behind him.2

Uranus’s severed manhood was cast into the sea, where it mingled with the sea foam to produce giants, nymphs, and the goddess Aphrodite.

In his triumph, Cronus banished the Cyclopes and Hecatoncheires to Tartarus and ushered in the reign of the Titans, sometimes known as the Golden Age of the Greek mythos. The peace proved short-lived, however. Like his father, Cronus grew jealous and cruel. He, too, came to suspect that his children, born of his sister/wife Rhea, would attempt to usurp his power. In an effort to prevent this calamity, Cronus ate each of his children as soon as they emerged from the womb.

He would have eaten them all if not for Rhea, who substituted a rock dressed in swaddling clothes for Zeus, the last of her six children. Under Gaia's watchful eye, Zeus grew into maturity and rose up against his father. The ensuing conflict, which involved all the deities of Greek lore, came to be known as the Titanomachy. Zeus’s Olympian faction eventually won the day, and the new king of the gods banished Cronus and the other Titans to the pits of Tartarus, where they would suffer for all eternity.

Many Renaissance scholars viewed Cronus and Chronos, a deity associated with time, as the same entity, and the two eventually merged into the character of "Father Time." This errorneous conflation was a result of the similarity between the proper name “Cronus” and kronos, the greek word for time. This classic example of folk etymology explains why the Father Time character has often wielded a scythe (used to sever lives, as farmers cut wheat), an implement often associated with Cronus.

Cronus was featured as a recurring character in the God of War video game series, and served as a major antagonist in God of War III (2010). In Rick Riordan's Percy Jackson and the Olympians book series, Cronus appeared as Kronos, a nefarious troublemaker who had acquired an attitude after four thousand years of captivity in Tartarus. He lead an army of monsters to Mt. Olympus in an attempt to topple Zeus's Olympian regime.

Saturn, the sixth planet from the sun, is named after Cronus's Roman equivalent.