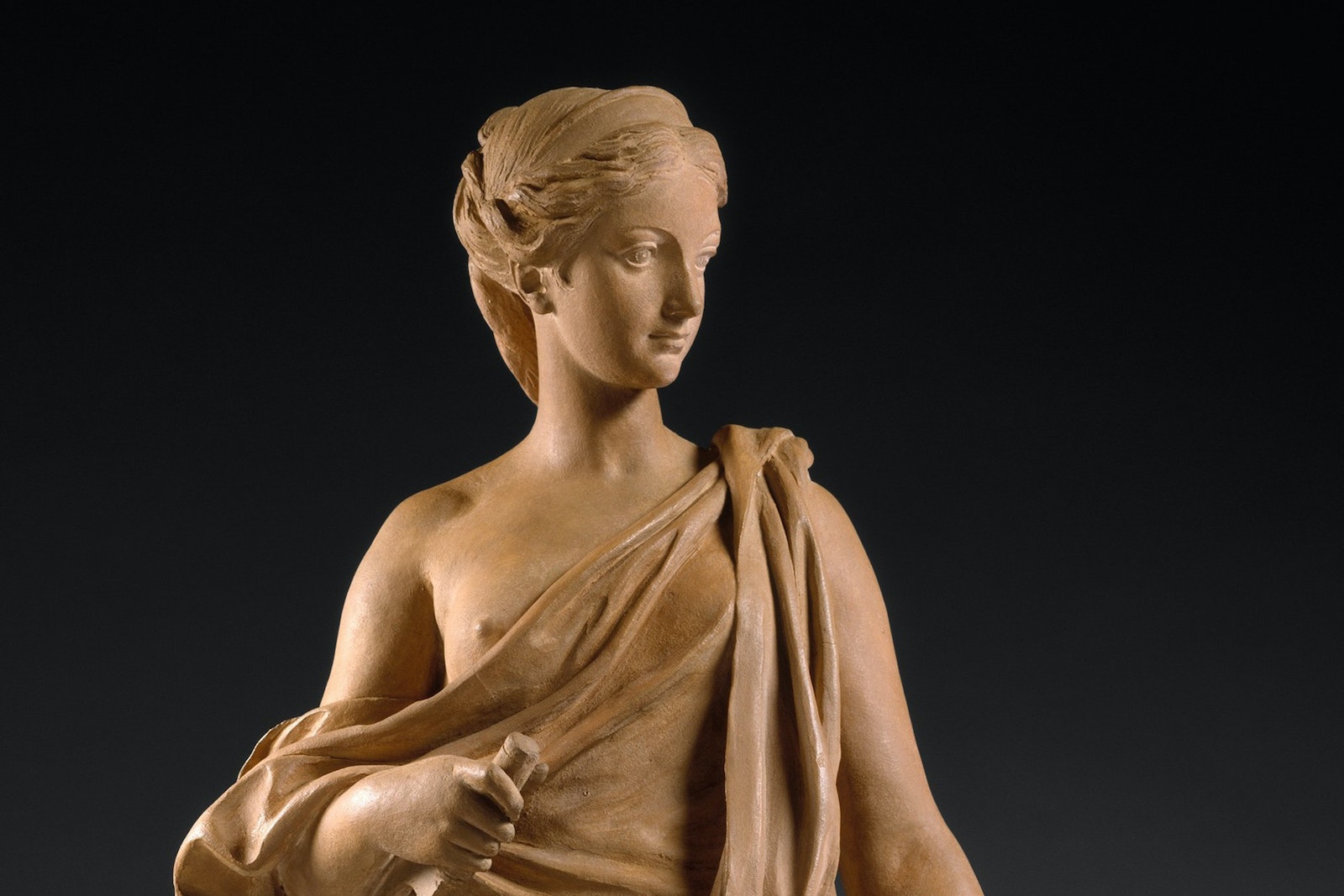 The Roman goddess of fertility and agriculture, Ceres was the patron of farmers and protector of the plebeians. Adapted from the Greek deity Demeter, Ceres was worshiped as the mother of Proserpina, whose abduction by Pluto was a central episode in Greek and Roman mythologies. In the early days of Rome, Ceres was the chief member of the “plebeian” Aventine Triad, a cult of three deities worshiped by the common folk. The Triad's humble facilities on the Aventine Hill stood in marked contrast to the palatial grandeur that marked the nearby Capitoline Hill.

Ceres was the patron and protector of farmers, pastoralists, and plebeians; she was also the overseer of the elected officials known as the tribunes. Ceres offered her personal guidance to the “Tribune of the Plebeians,” a powerful magistrate that held the power to veto the decisions of the consul. The Tribune also enjoyed sacrosanctity, a status imparted by Roman sacred law making it illegal and heretical to harm its bearer. She was, then, the ultimate deity of the common people of Rome, whose bounty was thought to nourish even the humblest of Romans. The common folk lavished praise upon the golden goddess, and celebrated her at a number of festivals throughout the year. These festivals generally took place during the sowing and harvest seasons.

The name “Ceres” has been traced back to the Proto Indo-European root ḱerh-, meaning “to nourish, satiate, or feed.” The nearest Latin analogue, crescere, had a similar meaning: “to grow, to arise, or to come to be.”

Ceres’ name has come to form the English word “cereal” and the French “céréale,” both used to describe varieties of grass that yield edible grain, as well as the edible grains themselves.1

In addition to her given name, Ceres was known as Ceres Augusta, meaning “Ceres the Great” or “Ceres the Awesome.” The poet Virgil referred to her as Ceres Legifera, or “Ceres the Law-Bearing,” a reference to her role as a bringer of peace. There are some indications that Ceres was associated with the cult of the so-called Magna Mater, or “Great Mother;" this title may have been yet another name for the Roman goddess.

Ceres held power over all agriculture and ensured the bounty of the annual harvests. Generally thought to be a young woman, Ceres was usually presented as an adult of child-bearing age. She often carried a staff as a symbol of her authority, but would sometimes carry a torch as well. The latter item served both as an allusion to her search for her daughter Proserpina and as a symbol of enlightenment. She was also commonly depicted holding grains of wheat (or some other cereal crop) and pulling a plow.

Ceres was the daughter of Saturn, the god of the cosmos who ruled before the coming of Jupiter, and Ops, a personification of the earth. Her brothers included Jupiter, as well as Neptune and Pluto, gods of the sea and underworld, respectively. Her sisters were Vesta, goddess of hearth and home, and Juno, the maternal queen of the Roman gods.

While Ceres was not known as a particularly amorous goddess, she did have at least one affair; this dalliance produced her only child, a daughter named Proserpina (or Prosperine). The Roman counterpart to Persephone, Proserpina was known for her beauty and purity. Proserpina's father was Ceres’ brother Jupiter, who was notorious for his many infidelities.

Ceres’ origins harkened back to the dawn of time, when the first gods and Titans were struggling to impose order upon a chaotic world. In the beginning of time, the cosmos was ruled by a god (or Titan) known as Caelus. Eventually, Caelus’s son Saturn overthrew him and took control of the universe for himself.

In time, Saturn mated with Ops, goddess of the elemental earth, and sired six children. As the children grew within Ops’ womb, Saturn learned of a prophecy predicting that one of his children would overthrow him as he had overthrown Caelus. Unsure of the usurper's identity, Saturn ate his first five children (Ceres included) as soon as they emerged from the womb. In an effort to preserve her progeny, Ops tricked Saturn into eating a rock wrapped in swaddling clothes in place of her final child, Jupiter. Unable to digest the rock, Saturn vomited the entire contents of his stomach back into the world. Ceres, along with her siblings Pluto, Neptune, Juno, and Vesta, were now free. Together with their brother Jupiter, the sibling deities brought order to the universe.

#Ceres and Abduction of Proserpina

The mythology of Ceres centered on the abduction of her daughter, Proserpina, by the powerful chthonic deity, Pluto. It was one of the most famous mythological tales in the ancient world, one told by the Greeks, whose Eleusinian mystery cult focused on the story, and cherished by the Romans as well. In his first century works, the Metamorphoses and the Fasti, the great poet Ovid retold the story in the Roman style; it is from these works that the following summary is taken.

As lord of the underworld, Pluto spent his days in solitude and grew lonely. Venus, the goddess of love and sexuality, took pity on Pluto (referred to here by his traditional name, Dis) and sent her son Cupid to visit him. Cupid fired his arrows at Pluto, allowing him to feel love and lust that he had so long been denied. On his next trip to the surface world, he spied Proserpina, who was cavorting with a group of nymphs on the island of Sicily. Immediately, Pluto seized the young beauty and whisked her away in his chariot bound for the underworld.

Devastated by the loss of her daughter, and not knowing what really happened, Ceres set off in search of the missing girl. Though she traveled far and wide, and carried a torch to help her see clearly, her search was fruitless. At long last, Ceres made her way to Siciliy, where she found Prosperina’s belt made from delicate tears of nymphs. In her sorrowful anger, she put a curse on Sicily that blighted the city's crops and left its lands barren:

The goddess tore her dishevelled hair, and beat her breast again and again with her hands, as if she at last comprehended the rape. She did not know yet where Prosperine was, but condemned all the lands, and called them thankless and unworthy of her gift of corn.2

Watching from on high, the other gods and goddesses realized that Ceres’ grief must be remedied. Seizing the moment, Jupiter sent Mercury to deliver a message to Pluto: the lord of the underworld was to release Proserpina immediately and return her safely to her mother. Though Pluto consented to Jupiter’s demands, he stated that he would only return Proserpina if she had not consumed the food of the underworld. As Proserpina had eaten seven pomegranate seeds from the fruit in Pluto’s subterranean garden, Pluto therefore refused to release the girl.

After much debate, a compromise was reached whereby Proserpina would divide her time between her mother and her abductor. The precise amount of time spent with each was presented differently in different traditions, but the time of the year Proserpina spent with Pluto corresponded to winter, when Ceres was too angry and distraught to allow growing things to flourish. Spring marked the return of Proserpina (and life itself) to the world.

Now Jupiter, intervening, between his brother and grieving sister, divides the turning year, equally. And now the goddess, Proserpina, shared divinity of the two kingdoms, spends so many months with her mother, so many months with her husband. The aspect of her face and mind alters in a moment. Now the goddess’s looks are glad that even Dis could see were sad, a moment ago. Just as the sun, hidden, before, by clouds of rain, wins through and leaves the clouds.3

#Ceres and the Roman State Religion

Ceres was a central figure of worship amongst the Romans until the widespread adoption of Christianity occurred in the fourth century CE. Overseeing the religious observation of Ceres was a priest known as the Flamen Cerialis. In the Roman state religion, Ceres was known to command a retinue of lesser gods representing the various aspects of agriculture and fertility.

The Romans devoted several festivals to the goddess of agriculture. One such festival was known as Feriae Sementivae. Beginning on February 2nd, the festival marked the beginning of the sowing season and featured ritual sacrifices to Ceres. The Romans would first give a propitiatory offering of grain before sacrificing a pregnant sow to the goddess. The Romans offered these sacrifices were in the hopes that Ceres would bless their crops and bring them fortune during the sowing season.

The Roman's main celebration of Ceres was the Cerealia, a raucous affair held each April when the crops were budding with new life. The Cerealia featured circus games and races in the Circus Maximus, the great Roman race track that ended beneath the Temple of Ceres on the Aventine Hill. The Cerealia was chiefly a plebeian affair, organized by plebeian magistrates and characterized by indulgence. The event ended with the releasing of foxes into the Circus Maximus; each fox had a torch attached to its tail.

Though Ceres is seldom represented in traditional popular culture, she has nevertheless appeared regularly as a symbol of agricultural fertility. A statue of Ceres sits atop the Chicago Board of Trade Building, which hosts several agricultural offices. Similar statues rest atop the Capitol State Capitol building in Jefferson City and the Vermont State House in Montpelier. In these latter cases, Ceres is depicted wearing robes and clutching a bundle of grain.

Elsewhere, Ceres lent her name to a celestial body. The dwarf planet Ceres was discovered in 1801 by Father Guiseppe Piazza and is located within the asteroid belt between Mars and Jupiter. Ceres also gave her name to the element cerium. This element was discovered in 1803 by the Swedish chemists Jöns Jakob Berzelius and Wilhelm Hisinger, as well as the German chemist Martin Heinrich Klaproth. Strangely, these simultaneous discoveries of cerium occurred independently of each other.

Ceres also forms the basis of the word “cereal,” which is used for grain crops and the breakfast foods made from them.