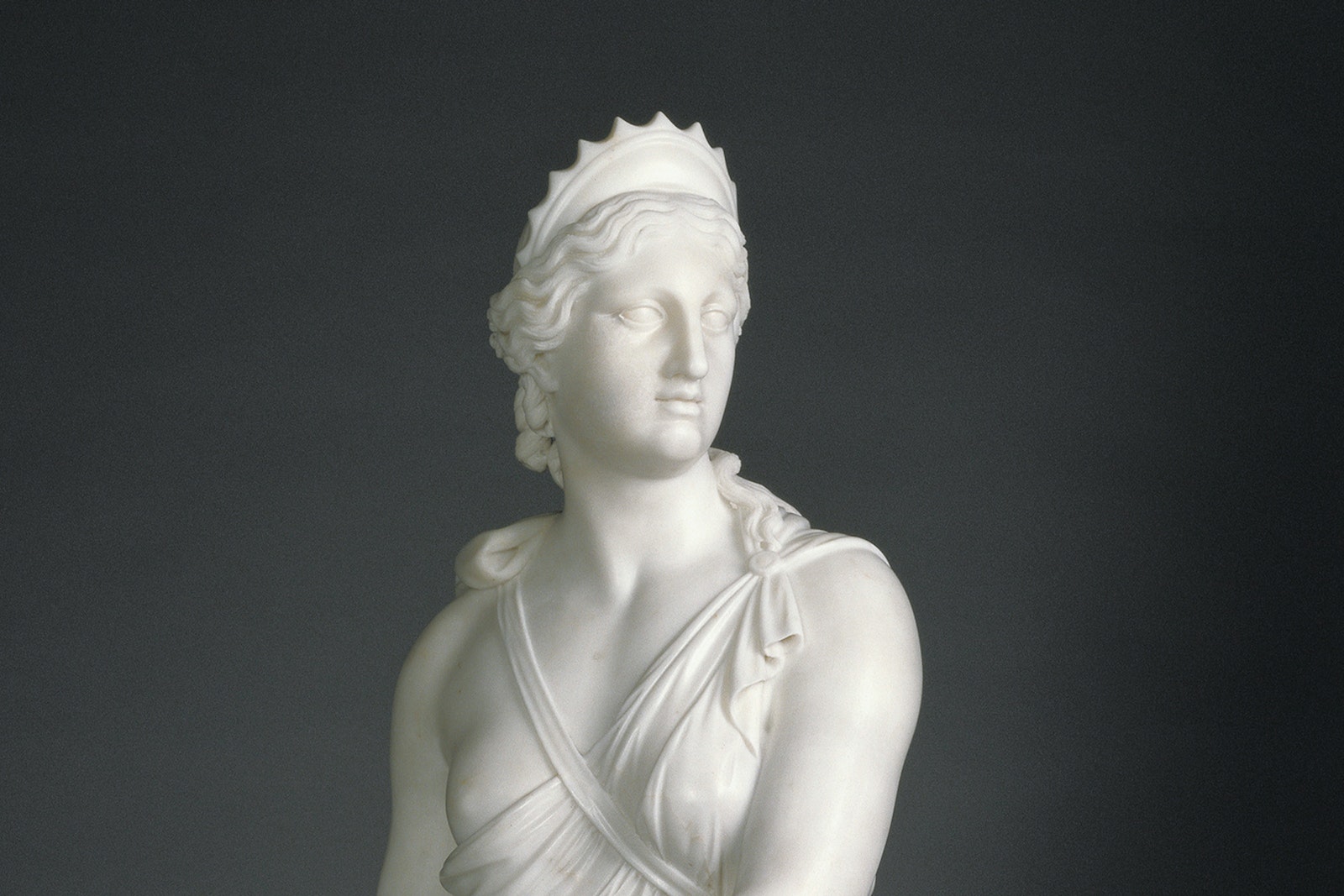 The Roman goddess of marriage, home, and family, Juno was a champion of women and protector of the Roman state. She was married to Jupiter, king of all the gods, and served as a part of the divine ruling triumvirate known as the Capitoline Triad. Juno was adapted from the Greek goddess Hera, and her essential characteristics and mythology were nearly identical to her Greek predecessor.

Juno was among the first Roman gods and goddesses, and like her counterpart deities was thought to oversee both the private affairs of her worshipers and the affairs of the Roman state. According to the time and place of her worship, she embodied several distinct personae. She was “Mother”, “Midwife”, “Queen”, and “Light Bringer.” She was also considered a moon goddess, likely for her association with the waxing and waning of the celestial body, which in turn symbolized the cycles of growth and decay that defined all of existence.

The fluidity of her identity made her one of the most broadly worshiped Roman deities, as is evidenced by the huge number of temples built in her honor and festivals held in her name. Though she remained a beloved figure for centuries, Juno’s importance began to wane with the advent of the Roman Empire in the first century BCE.

The name “Juno” is thought to have emerged from a host of words meaning youth, youthfulness, and rejuvenation. The name was widely believed to have been derived from the Latin iuvenis, meaning "youth.” The root of iuvenis was often seen in Latin words such as iunex, meaning “heifer,” or a cow that has not had a calf. It was also apparent in the verb iuvare, meaning “to give aid” or “to succor,” as well as iuvenescere, meaning “to rejuvenate,” or literally, “to make young again.” Both verbs related to Juno’s personae as a mother and rejuvenator, the latter of which was seen in her stewardship over lunar and menstrual cycles.

In the ancient world and among the Romans, Juno was seen as a counterpart to the Etruscan goddess, Uni, who was the chief god of the Etruscan people. The Etruscans were a pre-Roman Italian people who built a sophisticated kingdom, the culture of greatly influenced the Romans. The Etruscan-Roman connection, as well as the striking similarity between the goddess’ names, suggested another origin for Juno as a goddess and a name.

Juno was known by a number of epithets, each of which showcased a distinct persona of the goddess. For her role in succoring the needy, she was called Juno Sospita, or “Juno the Savior". She was also called Juno Moneta, or “Juno the Warner,” for bringing news of danger and preparing the threatened. She was named Juno Regina or “Queen Juno,” for her role as a head of state and member of the Capitoline Triad (with Jupiter and Minerva), but was also called Juno Opigena, or “Juno the Midwife,” for overseeing childbirth. Finally, she was known as Juno Lucina, or “Juno Who Brings Light,” for bringing light, life, and enlightenment to those who worshipped her.

As matron goddess of the Roman pantheon, Juno oversaw all matters related to the health and growth of the Roman state and the people who comprised it. She was particularly associated with the cycles and processes related to women. She blessed marriages, oversaw sexual reproduction, and ensured the safe arrival of children. Her control over the female menstrual cycle—a manifestation of her rejuvenating spirit—was mirrored in the heavens via her control over the waxing and waning of the moon. Thus, rather than actually embodying or actually being the moon, Juno served as the source of cyclical transformations.

Juno was a daughter of Saturn, the god of the sky who ruled before Jupiter, and Ops (or Opis), the goddess of the earth and growth. Her brothers were Jupiter, Neptune, god of the sea, and Pluto, god of the underworld and wealth. Her sisters were Ceres, an agricultural goddess who oversaw the growth of cereals (the word “cereal,” in fact, comes from Ceres), and Vesta, the protector goddess of the hearth and home, and a defender of purity, virginity, and maidens.

Juno married her brother Jupiter, the king of gods, with whom she ruled the cosmos and, more humbly, the Roman state. They had several children together, including Mars, god of war and patron of Roman arms and armies, Bellona, a goddess of war, and Vulcan, god of fire, metalworking, and the forge. Another of their children was Juventus, a goddess who shared Juno’s association with youth and rejuvenation and oversaw the transition from childhood to adulthood.

The Coming of Juno

Rather than creating a tradition of mythological narratives themselves, the Romans often borrowed and appropriated the mythology of the Greeks, substituting Roman figures for the previously used Greek deities. In the Romanized version of this mythology, Juno took the part of Hera, the queen mother of the Greek deities. As a result, the mythologies of the two goddesses are largely identical.

The story of Juno’s creation, for example, was very similar to Hera’s. In the beginning of time, the cosmos was ruled by a god or Titan known as Caelus. In time, Caelus’s son Saturn overthrew him and took control of the universe for himself. Saturn united with Ops, the goddess of elemental earth, and sired children with her.

While the children were still growing in Ops’ womb, Saturn learned of a prophecy that predicted his downfall at the hands of one of his offspring. Not knowing who was to take the role of usurper, Saturn ate his first five children, one of whom was Juno. Ops saved the last child, Jupiter, and substituted a rock in his place. When Saturn ate the rock, he came down with a case of indigestion that ultimately caused him to vomit up his children; Juno, Pluto, Neptune, Ceres, and Vesta were soon free. After combining their strength with that of their younger brother Jupiter, the divine siblings took over the world and divided responsibilities amongst themselves.

Eventually, Juno married her brother Jupiter. Though they had children together, their marriage was not a happy one. A notorious womanizer, Jupiter had many affairs. One Roman myth even explained that fog was created as a result of Jupiter trying to conceal his affairs from Juno’s watchful gaze. A jealous goddess, Juno was constantly trying to find and punish those with whom her husband had cheated.

In an episode borrowed from Greek mythology, Juno doggedly pursued Io, one of Jupiter’s many lovers. Io was a priestess of Jupiter with whom the god had fallen in love. After initially spurning his advances, Io succumbed to the charms of the god and the two had sex. When Juno found out, she promised vengeance, so Jupiter, disguised his lover from his jealous wife by transforming Io into a heifer (which, probably not coincidentally, was a symbol of Juno).

After discovering the ruse, Juno sent Argus, a monster with one hundred eyes, to keep watch over Io. Jupiter responded by sending Mercury to stop Argus; he did so by lulling the monster to sleep and then murdering him. As in the Greek tale, Juno put Argus’s one hundred eyes in the tail of the peacock so that she would always remember her loyal creature.

Though Io escaped from Argus, Juno persisted in her pursuit. She transformed herself into a monstrous gadfly and mercilessly bit the heifer. The cow journeyed far and wide to elude Juno—in certain versions, she even found Prometheus chained to a rock. Eventually, her struggles were rewarded when Jupiter transformed her back into her human form. Following these adventures, Io lived happily and had many children.

Juno and the Founding in Virgil’s Aeneid

According to Virgil’s Aeneid, Juno also played a role in the founding of Rome. The Aeneid focused on the trials of Aeneas, a hero who fought on the losing side during the Trojan War. As the city was being sacked by the Achaeans, Aeneas and his father escaped the city and set out on a journey that would take them across the Mediterranean and back again. According to prophecy, Aeneas was fated to found an Italian city that would serve as the capital of the greatest empire in history—an empire that would also conquer the powerful city-state of Carthage in North Africa.

Acting in her role as patron of Carthage, Juno tried to thwart the prophecy and prevent Aeneas from ever reaching Italy. After luring Aeneas to Carthage, Juno arranged for him to meet and fall in love with Dido, the city-state’s enchanting queen. Though the two did indeed fall in love, Aeneas tore himself away and sailed for Italy to fulfill his destiny. Despairing at the loss of her lover, Dido committed suicide. Juno, meanwhile, remained focused on her prey. She roiled the seas and tried to sink Aeneas’ vessel, but Neptune intervened and saw the hero safely to Rome.

Juno and the Roman State Religion

The Romans honored Juno with many festivals spread across the calendar year. During the Matronalia, the festival held on the first of March (the first day of the lunar year), Juno was celebrated as the archetypal “Mother” that symbolically gave birth to the new year. Her association with the turning of the years, measured through the progression of lunar cycles, likely explained her connection to the moon.

The Romans also observed Juno during Caprotinae, a festival held on the nones of Quintilus (later renamed "July" after Julius Caesar). This festival featured slave girls ritualistically beating themselves and the sacrificing of lamb and cattle, among other festivities. She was honored with a festival called the Juno Capitolina on the ides of September, as well as the Juno Moneta on the calends of June. The Juno Regina was held on the calends of October, and, on the calends of February—the last month of the lunar calendar—Juno served as the central figure of the Juno Sospita. It was at this final major festival that Juno closed the annual cycle, ensuring a smooth transition into the next.

In recent times, Juno lent her name to a space probe launched in 2011 to investigate the planet Jupiter. Built by Lockheed Martin and operated by NASA and the Jet Propulsion Laboratory, Juno is currently orbiting the massive planet, examining its magnetic and gravitational fields as well as its composition.

Juno’s name was also used in the popular 2007 film Juno, starring Ellen Page and Michael Cera. Though the movie did not invoke the Roman goddess directly, the story centered on the travails of a pregnant teenager and involved themes of youth, motherhood, and child-rearing—all traditional domains of Juno.