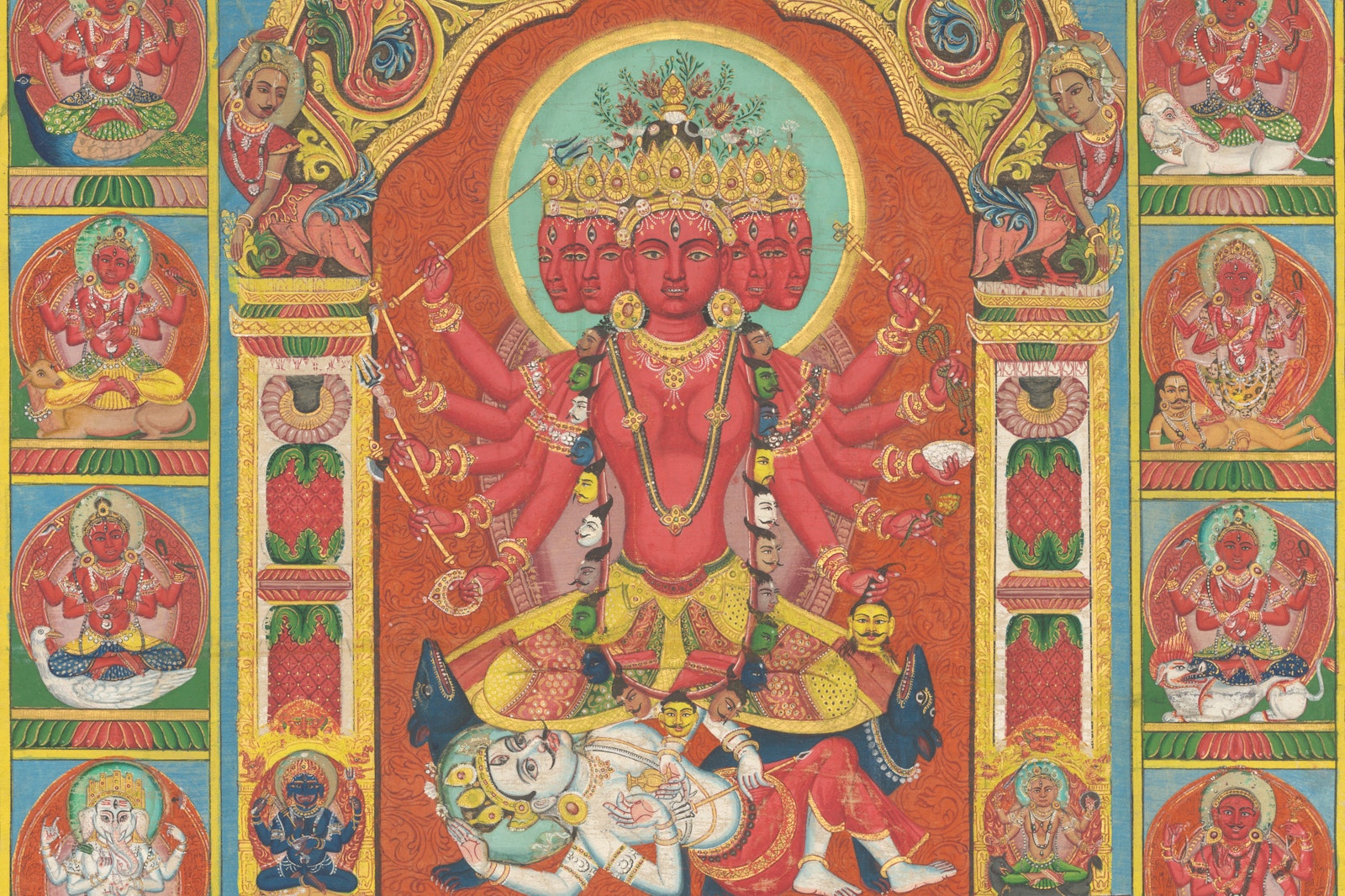 Hinduism presents a startling number of gods, goddesses, demons, nagas (snakes), and heavenly beings, most with multiple names and epithets. A popular phrase holds that there are over thirty-three million gods in Hinduism. Although this is an exaggeration, it does underscore the reality that Indian religions in general, and Hinduism in particular, are filled to the brim with gods and goddesses.1

The power of the gods varies across different historical periods. In the Vedic period (roughly 1500-600 BCE), gods such as Indra, Agni, Varuna, and Prajapati reigned supreme and secure in their power. But this invincibility was short-lived; by the time of the epics and the Puranas, sages and priests had arisen as powerful beings who could challenge and potentially overthrow the gods if they meditated and performed enough austerities. Likewise, demons and asuras (titans) win their battles with the gods as often as they lose them, sometimes subjecting Indra and the other gods to centuries or millennia of asura rule.

The decline of the earlier Vedic gods in the Hindu Puranas coincides with the rise of the popular gods of today: Shiva, Vishnu, Ganesha, and Devi (or Shakti), the supreme goddess. Though the Vedic gods are still depicted as mighty and worthy of respect, they have been overshadowed by newer gods.

Several factors may account for the vast collection of divine and semi-divine figures throughout Hinduism and other Indian religions. Hinduism is a living tradition with many millions of followers around the world. This has resulted in ongoing theological discussions and constant refinement of the gods’ domains, attributes, and mythologies.

Unlike other pantheons, such as those found in Greek, Syrian, and Norse mythology, many Indian and Hindu gods have enjoyed a continual and unbroken worship since the early Vedic period, beginning ca. 1500 BCE.2 Because of this, Hindu and Indian traditions continued to develop and evolve long after other pantheons declined or were assimilated into Abrahamic traditions.

The complicated relationship between the various strands of Hinduism—which sometimes conflict and sometimes coexist—also prevents a neat description of Hinduism as a whole. The religion could be deemed polytheistic (indicating a belief in many gods), but this is a deceptively straightforward category. Given the widespread acceptance within Hinduism of Brahman, a universal, all-pervading essence, it is also accurate to characterize strands of Hinduism as pantheistic.

Further complicating matters is the fact that three of the most popular branches of Hinduism—Vaishnavism, Shaivism, and Shaktism—all claim that a particular god or goddess is identical with Brahman. As a result, all gods and things are ultimately part of one supreme divine figure. Based on this belief, we could characterize much of Hinduism as henotheistic, which acknowledges the existence of many gods while holding up one in particular as the supreme god.

Because of these complications and disagreements, it is often more accurate to speak of Hinduism as comprising various shades and combinations of polytheism, pantheism, and henotheism simultaneously. Moreover, there is not one Hinduism but several, each with its own unique (and conflicting) categories, lists, and hierarchies of gods.

Finally, Hinduism has changed and evolved in response to encounters with other cultures and religions. During the Vedic period, the gods of the incoming Aryan-speaking peoples came into contact with the native Indian populations, giving rise to the later Brahmanical and Puranic traditions. The simultaneous growth of ascetic traditions such as Buddhism and Jainism around 500 BCE and the arrival of Islam in the early Middle Ages left their own indelible mark on Hinduism, no doubt influencing the popularity or decline of gods throughout the centuries.

The list below, then, should not be regarded as an absolute or complete account of all the Hindu gods. Such a list would be impossible. Several gods rightly belong in multiple categories but have only been placed into one for the sake of simplicity.3

As their name suggests, Vedic gods and goddesses are described and worshipped in the Vedas, a collection of hymns and sacrificial rites memorized and passed down in an unbroken oral transmission that has survived for well over three thousand years. The most common form of worship during the Vedic period (roughly 1500-600 BCE) was the Vedic sacrifice, a highly organized affair in which Brahmins sang hymns and threw offerings of ghee (clarified butter) and other substances into a fire. These sacrifices continue in a somewhat altered form to this day.

As the oldest of the Hindu devas, or gods, these figures have enjoyed the longest continual worship.

The Trayastrinshata, or “Thirty-Three Gods”

Although they are known as the “Thirty-Three Gods,” this collection of Vedic gods varies in number from list to list. They appear in Buddhism as the Trayatrimsha (also spelled Trayastrimsha in Sanskrit or Tavatimsa in Pali).

The number of Adityas varies between seven, eight, and twelve. Lists of seven or eight appear in Vedic texts, while the number grows to twelve in the Brahmanas and epics.

The Eleven Rudras are a collection of gods connected to Rudra, the Vedic forerunner of Shiva. They appear either as forms or aspects of Rudra, or as his children or servants. Hindu sources disagree on their composition, and many of these gods were either intended as, or wound up developing into, nicknames for Shiva. As such, details for specific figures are often rare. It is also highly likely that several Rudras appear in name only and have no existence apart from such lists.

While the Sanskrit word vasu often means simply “good” or “beneficent,” the eight Vasus are associated with the elements: light, the earth, the waters, the sun, the moon, or fire. In the Vedic period, they were servants of Indra and later of Vishnu.

Gods and Goddesses of the Puranas and Epics

Much changed in Indian religions after the end of the Vedic period. Ascetic traditions such as Buddhism and Jainism grew more popular, sometimes becoming the dominant religions of the ruling class. Chandragupta Maurya, the founder of the great Indian Mauryan empire, was purportedly a supporter of the Jain tradition during the fourth century BCE. His grandson Ashoka is famous for becoming a lay supporter of Buddhism and greatly accelerating its popularity throughout India.

In addition to responding to these ascetic schools, orthodox Brahmanical and Hindu traditions experienced their own developments. New gods such as Shiva rose to prominence, and old gods such as Indra declined or fell into the proverbial gutter of the pantheon. Often, older gods were recast as or identified with these newer figures: the new Shiva, for example, was identified with the older Rudra, and Parvati was linked with the late Vedic goddess Uma. Gods merged and split apart continually, depending on local popularity and patronage.

The Vedic gods continued to be worshipped with Vedic hymns and sacrifices. But in most cases, Puranic gods were the new power brokers of the Hindu gods, overshadowing the older Vedic figures.