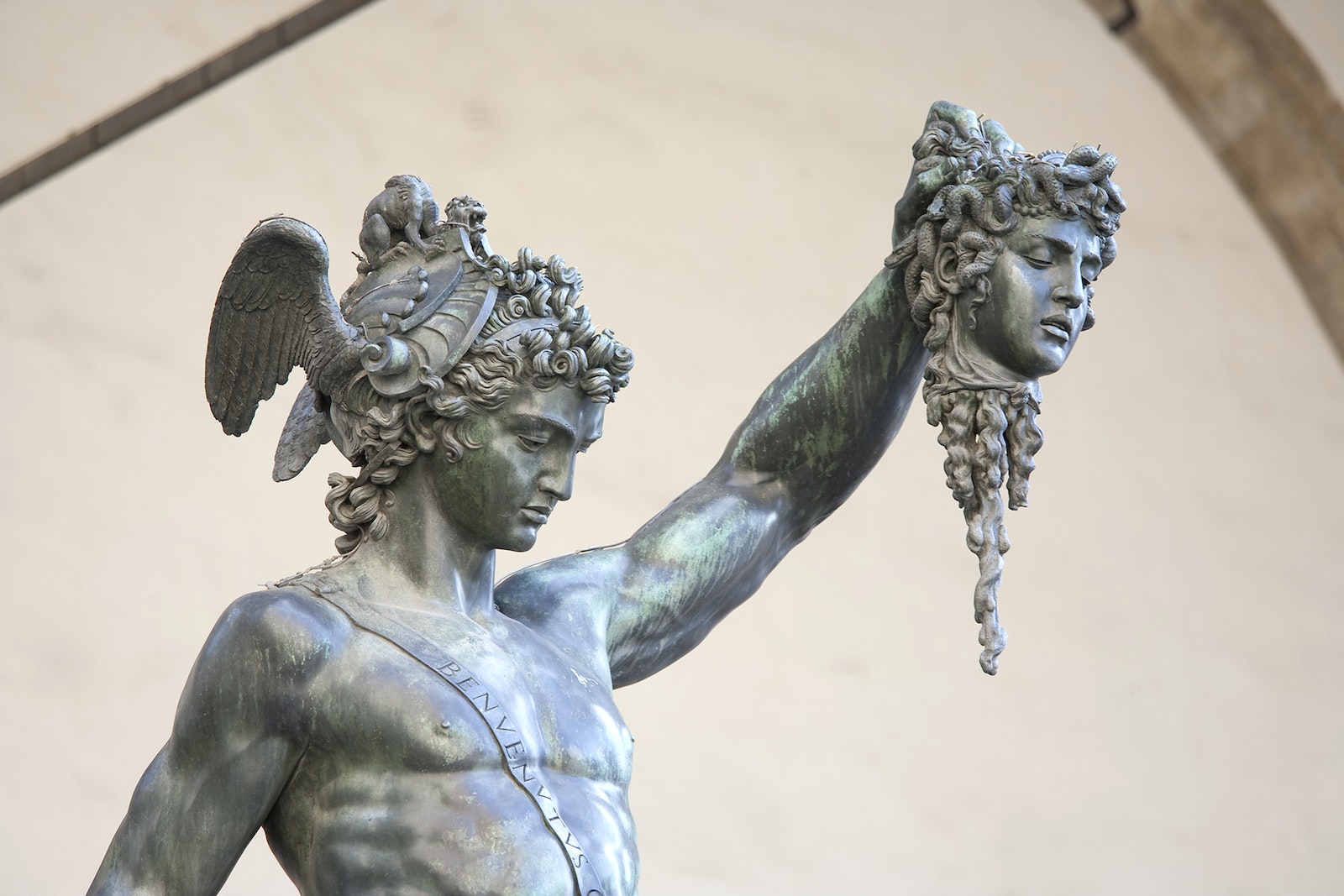 Perseus, the mortal son of Zeus and the Argive princess Danae, was a Greek hero, king, and slayer of monsters. After he and his mother were exiled from their homeland, Perseus was raised on a remote island where he grew up protecting his mother from the cruel King Polydectes.

Perseus made his name by killing Medusa, a monster whose gaze turned people to stone. Later, while passing through Ethiopia, Perseus rescued the princess Andromeda from a sea monster and made her his wife. At the end of his adventures, Perseus became the ruler of Mycenae and founded an important dynasty.

The etymology of Perseus’ name is obscure. An ancient folk etymology connected the name “Perseus” with the Persians, as he was sometimes said to have been their ancestor.1

Scholars in the eighteenth and nineteenth centuries often believed the name was derived from the Greek verb πέρθειν (perthein, "to sack, destroy"), combined with the ending -eus, which is common in many early Greek names (Theseus, Prometheus, etc.): Perseus’ name is thus translated as “the destroyer.”2

Other scholars have suggested that his name is connected with the underworld goddess Persephone3 or even with the Hittite war god Pirwa.4

Experts also disagree on when the name and its bearer originated. Martin Nilsson confidently dated Perseus and his myths to the Bronze Age (ca. 1600–1100 BCE),5 while T. P. Howe has argued that the name and the hero were invented later, perhaps during the Archaic Period (ca. 800–490 BCE).6

An early hero and a famous slayer of monsters, Perseus was usually represented with the weapons and artifacts he received from the gods to fight Medusa: an unbreakable sword, a helmet of invisibility, a mirror shield, winged sandals, and a magic satchel. In ancient and modern iconography, he is often shown holding the head of Medusa, which he wielded to turn his enemies to stone.

Following his exploits, Perseus built the city of Mycenae. Located in central Greece (in the northeast corner of the Peloponnese), this was one of the most important cities in Greek mythology. Perseus’ name became associated with the powerful Perseid dynasty, which included not only many Mycenaean kings but also famous heroes such as Heracles.

Perseus was a son of Zeus, the ruler of the Greek gods.7 His mother was Danae, the daughter of Acrisius, king of Argos. On his mother’s side, this made Perseus a descendant of the first ruling dynasty of Argos, which traced its origin to the river god Inachus.

With his wife Andromeda, Perseus had many children. According to Apollodorus, Perseus had six sons (Perses, Alcaeus, Sthenelus, Heleus, Mestor, and Electryon)8 and one daughter (Gorgophone).9

Like many of the children Zeus had by mortal mothers, Perseus’ early years were tumultuous and unhappy. Before Perseus was born, Acrisius, the king of Argos, was warned that he would one day be killed by his grandson. Acrisius therefore imprisoned his only child, Danae, to prevent her from ever having a son.

But Zeus fell in love with the beautiful Danae and visited her as a shower of gold dust. Soon after, Danae gave birth to Perseus.10

Acrisius, still fearful of the prophecy that he would be killed by his grandson, locked Danae and the baby Perseus in a chest, which he threw into the sea. The chest floated across the sea for many days until it finally washed ashore on the island of Seriphos. There, Danae and Perseus were found by Dictys, a fisherman and the brother of the king of the island, Polydectes. The kindly Dictys took in Danae and helped her raise Perseus.

When Perseus had grown to manhood, Polydectes, the king of Seriphos, fell in love with Danae. Danae, however, did not wish to marry Polydectes, and Perseus protected his mother from Polydectes’ unwanted advances. Polydectes then began plotting to get rid of Perseus.

One day, Polydectes held a large banquet at which each guest was ordered to bring him a gift. Of Perseus, Polydectes demanded the head of Medusa. This was regarded as a nearly impossible task: Medusa was one of the three monsters known as the Gorgons, whose heads were ringed by snakes instead of hair and whose gaze turned people to stone. Not shrinking from the daunting task, Perseus promised to bring Polydectes the head of Medusa.

In his quest for Medusa, Perseus was guided by the goddess Athena, the daughter of Zeus and thus his divine half-sister. Athena explained to him that only the Hesperides, the maidens guarding the grove of Hera, could tell him where to find Medusa and the Gorgons. But first, Perseus needed to find the Hesperides.

Instructed by Athena, Perseus visited the Graiae, the sisters of the Gorgons, to learn the whereabouts of the Hesperides. The Graiae were three old women who shared a single eye between them. Perseus sneaked up on the Graiae and snatched away their one eye, which he agreed to give back only after they told him where to find the Hesperides.

When Perseus reached the Hesperides, he was given a special satchel that could safely carry Medusa’s head. The other gods also helped supply Perseus for his quest: from Athena, he received a shield with a polished face; from his father, Zeus, he received an unbreakable sickle; from Hades, he received a helmet that rendered him invisible; finally, from Hermes, he received winged sandals.

Thus equipped, Perseus went to the cave of the Gorgons. When he found Medusa, he was able to approach her without turning to stone by looking at her reflection in Athena’s shield. He then cut off Medusa’s head using Zeus’ sword. When Medusa’s blood spilled to the earth, the winged horse Pegasus and his brother Chrysaor were born. Using Hades’ helmet of invisibility, Perseus snatched away Medusa’s severed head and escaped.

As Perseus made his way home, he passed through Ethiopia. There, he witnessed a strange and terrible scene: a beautiful young girl was bound naked to a rock, waiting for a sea monster to emerge from the depths and devour her. Cassiopeia, the queen of Ethiopia, had boasted that she was more beautiful than the fifty daughters of the sea deity Nereus.11 This angered Poseidon, who brought destruction on Ethiopia and would only be appeased if Cassiopeia sacrificed her daughter Andromeda to him. Andromeda was thus left in chains at the sea’s edge for Poseidon’s sea monster Cetus.

This was the scene that was unfolding as Perseus arrived in Ethiopia. Approaching Cassiopeia and her husband Cepheus, the king of Ethiopia, Perseus offered to save Andromeda’s life in exchange for her hand in marriage. Cassiopeia and Cepheus agreed (though no version of the myth explains why they abandoned their plans for sacrifice). Perseus subsequently killed Cetus and set Andromeda free.

The wedding of Perseus and Andromeda was disturbed, however, by the arrival of her uncle Phineus, who had originally been engaged to Andromeda. A quarrel erupted. In the end, Perseus turned Phineus and his supporters to stone by displaying Medusa’s head.

Perseus finally came back to Seriphos with his new bride, only to find that Polydectes had continued to pursue his mother, Danae. Perseus decided to end Polydectes’ unwanted advances once and for all. Going to Polydectes’ palace, Perseus showed the lecherous king the “gift” he himself had requested: the head of Medusa. Polydectes, disbelieving, looked at the Gorgon’s head and turned to stone.

After setting up Dictys as king of Seriphos in place of his brother Polydectes, Perseus returned to Argos, the kingdom of his grandfather Acrisius. When Acrisius learned of Perseus’ return, however, he fled the city, still dreading the prophecy that had predicted he would be killed by his grandson.

While Perseus was taking part in athletic games in the city of Larissa, he threw a discus, which struck an old man in the audience and killed him immediately. Later it was discovered that the victim was none other than his grandfather, Acrisius, thus inadvertently fulfilling the prophecy. Saddened, Perseus buried his grandfather and gave the kingdom of Argos to his cousin Megapenthes.

#The House of Perseus

According to many traditions, Perseus then ascended the throne of Tiryns and founded the city of Mycenae.12 He would become famous for building the formidable walls of Mycenae, made of boulders fitted tightly together without mortar. These fortifications, which are still standing today, were called “Cyclopean” in antiquity because they looked like they could only have been built by the giant Cyclopes.

Perseus founded the powerful House of Perseus, which supplied generations of kings and heroes. Through the children he had with Andromeda, Perseus became the ancestor of many important people, including the Persians, Heracles, Helen of Troy, and the Dioscuri (Castor and Polydeuces).

Perseus was sometimes worshipped as a hero in ancient Greece. The earliest evidence of his cult has been found in Mycenae: an inscription from the late sixth century BCE mentions “priestly analysts” of Perseus (an obscure term probably referring to record-keepers who also performed religious functions).13

Pausanias, a geographer who lived in the second century CE, wrote that in his own time the most important sanctuaries to Perseus were in Seriphos and Athens. He also described an altar to the hero on the road from Mycenae to Argos.14 However, these cults do not seem to have existed before the Hellenistic Period (323–31 BCE). Aside from these scraps, little is known of the hero worship associated with Perseus.

The myth of Perseus does appear in contemporary popular culture, even if Perseus is not as familiar as some other Greek mythical figures (such as Heracles). The 1981 film Clash of the Titans (remade in 2010) is loosely adapted from the myth of Perseus. Percy Jackson, the main character of Rick Riordan’s book series Percy Jackson and the Olympians, is named after Perseus.

In his modern portrayals, Perseus is generally a rather one-dimensional hero: brave, chivalrous, determined, noble. This is more or less in line with Perseus’ representation in ancient myth, where he was chiefly motivated by a desire to defend the weak (his mother, Andromeda) and never shrank from even the most daunting tasks.