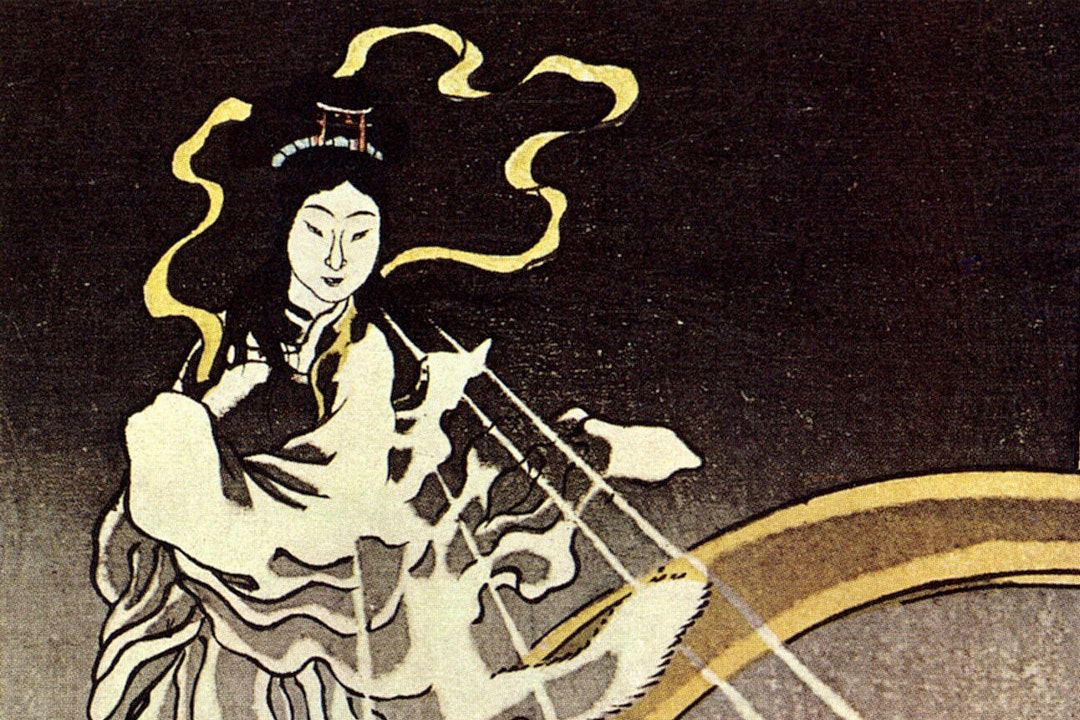 Inari is the Japanese kami (a type of god or spirit in the Shinto religion) of prosperity, tea, agriculture (especially rice), industry, and smithing. A complex deity with many faces, Inari is variously referred to as male, female, and androgynous, depending on the context. Although Inari’s role has changed over time, they have been popular throughout Japan for more than a thousand years. Inari is perhaps most well-known due to their association with foxes, called kitsune, who act as Inari’s messengers and receive protection in return.

Inari, a shortened form of Ine Nari or Ine ni Naru, is derived from the Kanji 稲荷, with 稲 representing “rice” and 荷 representing “cargo,” “freight,” or “to carry.” Inari’s full name is Inari Okami, or 稲荷大神, which can be translated as “the Great God Inari.” This is sometimes shortened to O-Inari, or 大稲荷. Another name is Ta-no-Kami (田の神), or “God of the Paddy Fields.” When referenced in a Buddhist context, Inari may be associated with a particular person on the path toward enlightenment (known as a bodhisattva), in which case Inari may take on secondary names related to that bodhisattva.

Inari is an incredibly popular deity who has more shrines dedicated to them than any other kami in Japan; a third of all shrines in the country are Inari shrines. This is largely because Inari’s many attributes have given the deity great significance to Japanese society and helped Inari stand the test of time. Over the centuries, as Japanese society has changed and evolved its priorities, Inari has changed alongside the culture to take on new roles. In recent centuries, these changes have been largely shaped by new definitions of “success” that stem from the Meiji era (1868–1912) and the rise of capitalism throughout the early 20th century.

Because Inari became prominent in pre-modern Japan when beliefs weren’t uniform, worshipers came to view the deity differently in different contexts. This helps explain why people have viewed Inari variously as male, female, and androgynous. Similarly, Inari’s vast identity has allowed people of different faiths and practices to embrace the deity, including Buddhists, who connected Inari with different sects and bodhisattva. For example, in Shingon Buddhism, the concept of the divine feminine, daikiniten, is connected to the power of foxes and thus to Inari, giving her additional powers from Buddhism—such as purifying light—she lacks in traditional Shinto depictions.

Inari is the god of prosperity and success, resulting in a universal appeal that helps explain Inari’s popularity across Japan. This prosperity applies in equal parts to agriculture and to industry, given the importance of Inari to craftsmen and smiths during the Edo period (1600-1868), for during this period smiths became an important part of Japanese industry and the culture of samurai. This continues into the modern period, with many companies giving prominence to Inari; the Japanese cosmetics company Shiseido, founded nearly 150 years ago and one of the oldest beauty companies in the world, counts Inari as their patron deity.

The most common association with Inari is their relationship to agriculture, and especially to rice. In this context, people view Inari as a female goddess whose blessings bring prosperity to the year‘s harvest. This extends to the products made from crops, such as sake, the Japanese alcohol produced from fermented rice. A popular rice ball, called Inarizushi, is named for Inari. In addition to rice, Inari is also associated with tea, an important staple of Japanese society for at least the last thousand years, which places her at the center of some of Japan’s most well-known customs.

Starting in the Edo period, the Japanese began to associate Inari with different crafts, including wood-working, textiles, and especially blacksmithing and swordsmithing. In this context, people usually speak of Inari as a male god. He guides the spirit of swordmakers, driving his hammer down on hot metal. This expansion of Inari’s domain may be in part because the Tokugawa Shogunate, Japan’s military government during the Edo period, shifted the primary form of wealth from rice-based taxes to a gold standard, and Japanese ideas of “success” followed suit. By virtue of his association with success, Inari followed this cultural shift, expanding his domain into the realm of gold and other metals.

The most common and well-known symbol of Inari is the fox, or kitsune. Kitsune are one of the most popular supernatural creatures (called yokai) in Japanese folklore. They are female spirits who use their wiles and cunning either to help or harm humans around them. Because Inari is viewed as benevolent, only helpful kitsune are considered her true servants, and they act as Inari’s messengers and protectors. To harm one of these foxes is an affront to Inari. Many shrines dedicated to Inari have statues of foxes at their gates (torii) or elsewhere outside the shrines, replacing the lion-dog komainu statues. In this context, Inari is almost always female.

Inari shrines (稲荷神社, Inari jinja) are distinct from other Japanese shrines, marked by vermilion gates (torii), stylistic fox statues, red roofs, white stucco walls, and often many torii in a row. While these are the most common traits, the presence of fox statues is the most consistent marker of Inari shrines, where worshipers often make offerings of rice and sake.

In total, there are at least 2,970 Inari shrines recognized in Japan today, making them the most common shrine in the country. The oldest and most prominent of these shrines is Fushimi Inari-taisha, found in Kyoto.

Given that Inari is many things at once, including multiple deities, it is hard to pin down Inari’s family or origins. In some tales, Inari was married to the goddess of agriculture, Uke Mochi, whose role they took over after Uke Mochi’s death. However, Inari does not appear in classical sources of Japanese folklore and mythology, making Inari’s origins unclear.

Despite not appearing in classical Japanese mythology, Inari is one of the most prominent deities throughout Japanese history.

#Before the Edo Period

Inari’s exact origins are unknown, but historians believe they predate the arrival of Buddhism in Japan in the sixth century. Almost as soon as it arrived, Buddhism quickly associated itself with Inari and Inari shrines at a time when Inari was closely connected to rice, agriculture, and tea. Given the importance of these items to the culture and economy of Japan, Inari became known as the god of prosperity and success. During this early period, worship at Fushimi in Kyoto was established. Some legendary figures, such as the wizard (onmyoji) named Abe no Seimei, were said to be descended from kitsune and thus blessed by Inari.

Japanese Buddhist sects such as Shingon have regarded Inari as their patron deity since their inception. During the Heian period (794-1185), Inari’s festival at Fushimi became a prominent festival, rivaling even the Gion Festival, which dates back to the 800s and is today Japan’s most famous festival. Imperial patronage of Inari and Inari shrines during this time led to their prominence across Japan, and this prominence remained even as political power changed hands.

#Edo Period to the Present Day

During the Edo period, worship of Inari began to change in ways that maintained their popularity. Though samurai had reigned in Japan for roughly the previous five centuries, the rise of blacksmiths and swordsmiths during the Tokugawa shogunate made the metal industries powerful. Because the currency of Japan changed from rice-based to gold-based during this period, Inari’s role as the kami of prosperity and success meant their influence and worship transferred to money, prosperity, and smithing. Inari therefore became the patron deity of smiths and swordsmen, a protector of warriors and merchants alike. Their relationship with agriculture and tea did not change, however, leading Inari to become the kami associated with both these old domains and the new.

After the Meiji Restoration reordered Japanese cosmology to favor State Shinto and thus traditional kami like Inari, the rise of capitalism and corporations meant that Inari became an incredibly popular deity during the Meiji, Taisho, and pre-war Showa periods (1868-1945). As Japan became a global economic power, the rise of Japanese economic interests meant that Inari (along with their shrines and priests) became important to the dedication of new companies, new corporate buildings, and to corporations in general.

Since the end of World War II, Inari has remained an incredibly popular deity. Though State Shinto was dissolved in 1945, Inari shrines have survived and remain Japan’s most common shrine type. Corporations still seek Inari’s blessings when they break new ground, and Inari is associated with not just corporate success but general prosperity for individuals, communities, and the country as a whole.

Inari’s prominence over such a long period has made them a rather confusing conflation of deities. Inari is often a singular deity, but they are sometimes represented as three different deities (Inari sanza) or even five different deities (Inari goza). The identity of these other deities is highly variable depending on the shrine, but they include the likes of Uke Mochi, Izanagi, Izanami, and other deities of agriculture, prosperity, creation, and order. This has led to people calling Inari by many different names.

In Buddhism, Inari is most closely associated with Dakiniten (the Indian Dakini, a divine feminine spirit in Vajrayana Buddhism) and Benzaiten (a Japanese version of the Indian Saraswati), one of the Seven Lucky Gods. In these forms, Inari is feminine.

As god(dess) of agriculture, Inari is similar to both Demeter and Dionysus from Greek mythology and the Norse goddess Freya.

Inari and their connection to kitsune make them a prominent deity in Japanese popular culture: