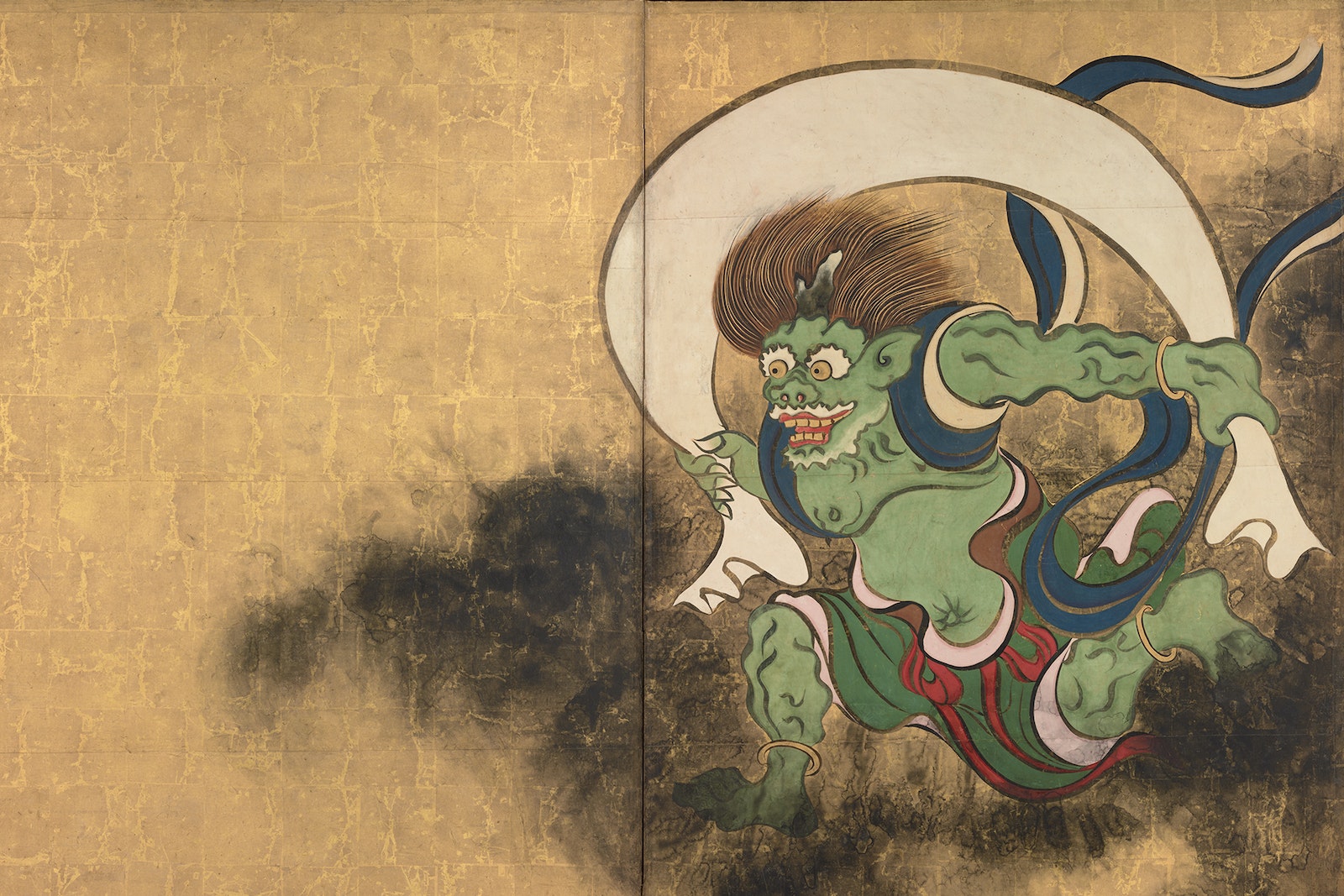 Fujin (風神) is the Japanese wind god, a powerful elemental deity whose bag of air moves all the winds of the world. Appearing alongside his brother Raijin, the thunder god, Fujin is neither good nor evil, although he is often a destructive force. He is one of Japan’s most well-known oni (demons, devils, or trolls in Japanese folklore).

Fujin is represented in Kanji as 風神, which literally translates to “wind god.” An alternate name is Futen (風天), which means “heavenly wind.”

Fujin is a well-depicted oni who is also sometimes treated as a kami (a type of god or spirit in the Shinto religion). With green skin and wind-disheveled red-white hair, his monstrous face is like that of a hungry ogre with eyes that are wide and fearful.

He wears a leopard skin, and around his shoulders is a large bag of air, which he uses to propel himself around the world, which in turn creates the world’s winds and storms. Fujin rides on a cloud, alternately depicted as a gray storm cloud or a fluffy cumulus. Each of his hands has four fingers, one per cardinal direction.

As god of the wind, Fujin is always on the move and seemingly ever-present, but he is said to be primarily visible during storms, particularly powerful typhoons, where the winds can fell trees and destroy houses. Although Fujin is seen mostly as a destructive force, he can also be associated with less intense winds that are gentle and refreshing. Therefore, compared to his brother Raijin, Fujin is somewhat less intense and more lackadaisical.

Fujin was born of Izanami, one of Japan’s primordial kami, and present in Yomi, the Underworld. His siblings are the many oni, or demons, of the underworld, including his brother Raijin. He is uncle of Raijin’s son Raitaro.

Fujin, though less famous than his brother, appears in Japanese mythology as a regular figure.

Fujin appears in the Kojiki, the book of myths and histories dating from the 700s and which codified many of the beliefs of the Shinto religion. However, Fujin’s appearance in this text is more implied than explicit. According to the Kojiki, Izanagi and Izanami bore the islands of Japan and the first generation of gods, but in doing so Izanami died.

Filled with grief, Izanagi followed his wife to Yomi, the Underworld, where he saw her covered in deep decaying wounds filled with demons. Izanagi rejected his wife, causing Izanami to fly into a rage. She chased him to the entrance of Yomi, where Izanagi blocked the exit with a stone. Through a crack, several oni who sought to kill Izanagi escaped into the world, where they would carry out Izanami’s vow to kill as many living creatures as she could every day. Fujin and his brother Raijin are two of those escaped oni, and they fulfill their mother’s promise through their control of storms.

Fujin and Raijin appear together frequently, with Fujin using his bag of air to create wind. These are often seen as destructive actions, but at times can be good. When the Mongols attempted to invade Japan in 1274, a storm destroyed much of their fleet, a feat attributed to the twin gods as an act of defending Japan. Ultimately the invasion was repelled and Japan protected. When a second invasion attempt occurred in 1281, it was said to be the largest invasion in history, larger than D-Day (a figure disputed by some historians), and yet again a great typhoon lasting two days destroyed the fleet, killing tens of thousands (or hundreds of thousands) of invading Mongol, Chinese, and Korean forces. Many Japanese believe Fujin and Raijin were responsible for this second storm, as well.

The imagery surrounding Fujin has been linked to wind gods across Eurasia, likely derived from Hellenistic portrayals of the Greek god Boreas, god of the north wind, who is also armed with a bag of wind and appears disheveled. With the rise of Hellenistic culture, artistic representation of ideas spread across Eurasia, from Persia on into India and across China to Japan. Hellennistic culture became a powerful force in central Asia, including in the Kushan Dynasty of India, where Boreas became Wardo. Wardo appears in Chinese art under various names, before appearing in Japan as Fujin. Thus it can be said that Fujin is the Japanese manifestation of the Greek god Boreas, though obviously he belongs to his own myth cycle and is understood in a very specific context in Shinto texts.

Though not as popular as his brother, Fujin has also inspired a number pop culture appearances: