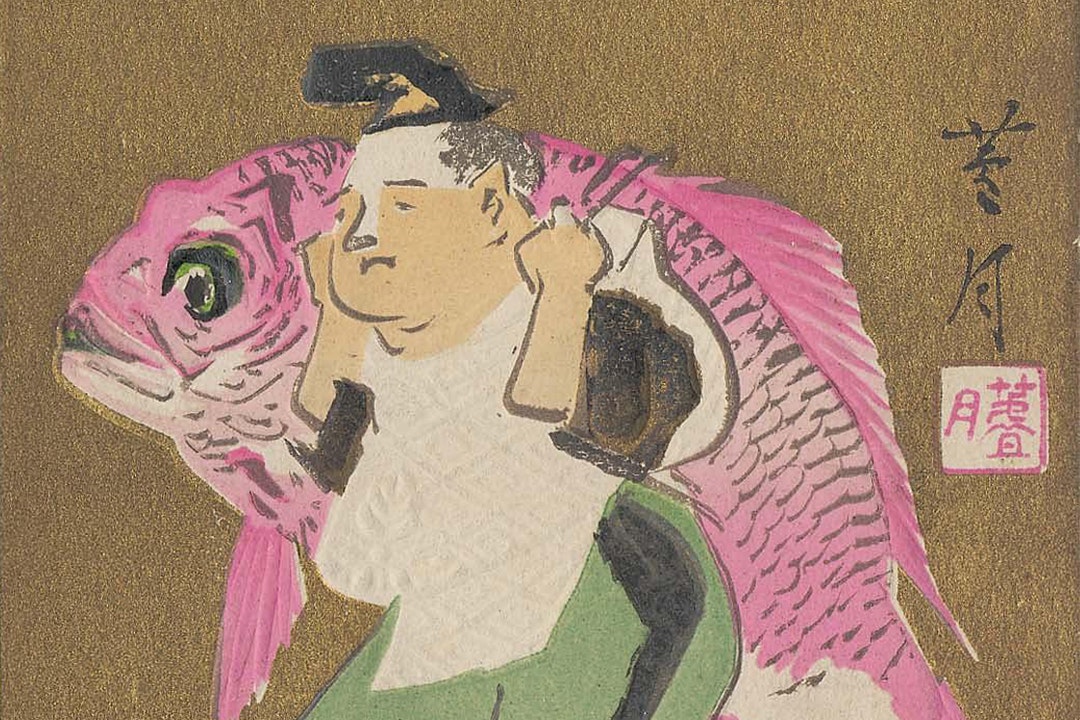 Ebisu is a Japanese god of luck, wealth, and prosperity, particularly where the sea is concerned; he is also the patron god of fishermen. Perpetually smiling and often dressed as a fisherman, Ebisu is one of the Seven Lucky Gods, and is in fact the only one original to Japan. His image has seen widespread use throughout Japan due to his close association with both the wealth of the sea and business prosperity.

Ebisu is represented by many Kanji, including 恵比須, 恵比寿, 夷, and 戎. The first two of these can be translated to mean “a favorable yield (in perpetuity).” Interestingly, 夷 and 戎 are Kanji used for the Ainu, Japan’s indigenous population. Ebisu is also known by several other names. His original name in most myths was Hiruko (蛭子, “leech child”), and he is sometimes known as Kotoshiro-nushi-no-kami (事代主神), meaning “chief deity of business time.”

Due to his jovial nature and the many depictions of such, he is also sometimes called Laughing Ebisu or Smiling Ebisu.

Often depicted as a rotund fisherman with a large hat, Ebisu is associated with the abundance of the sea and the luck it takes to bring said abundance home. He is always smiling and laughing, and carries a fishing rod and a large fish—usually either a red sea beam or red bass—with him most of the time. As the patron of sailors and those who live off the bounty of the sea, Ebisu is represented in animal form by whales, jellyfish, and whale sharks. Ebisu is also deaf and partially unable to walk due to his lack of bones as a child. Despite his crippled nature (or perhaps because of it), he still manages to be a kindly god who shares his wealth freely.

Ebisu’s inability to answer the annual call to return to the Grand Shrine of Izumo (in the tenth month of the Japanese calendar) gives him certain properties other Japanese deities lack. Of these properties, the most notable is his ability to be worshipped anywhere. This quality makes Ebisu a very popular deity with restaurants, corporations, and fisheries.

Ebisu is one of the Shichifukujin, the Seven Lucky Gods who bring wealth and abundance to worthy souls in Japan. Of these seven, he is the only one not to originate in India. Ebisu is often paired with Daikokuten; together with Fukurokuhu, they make up the Three Gods of Good Fortune, a subset of the Seven Lucky Gods.

Though his parentage varies depending on his origin, Ebisu is commonly believed to be the first child of Izanagi and Izanami. Though he was the first kami to be brought into the world, Ebisu was rejected by his parents for being imperfect. Other origins suggest he is the son of Okuninushi, kami of magic, or Daikokuten, another of the Seven Lucky Gods who is sometimes listed as Ebisu’s “twin” deity. Regardless of his parentage, most sources agree that he was raised by the Ainu deity Ebisu Saburo.

Ebisu has many origins, all of which have lead to his current status as one of the Seven Lucky Gods.

This child they placed in a boat of reeds, and let it float away.-Kojiki, translated by Basil Hall Chamberlain

The most common origin of Ebisu is as Hiruko, the first child of Izanagi and Izanami. The two gods had performed their marriage rituals and the subsequent consummation improperly, and thus produced a child with no bones whom they called Hiruko, the Leech Child. Horrified by the child’s disfigurements, Izanagi and Izanami disowned him and cast him into sea, where Hiruko floated for a time before washing onto an unknown shore (some suggest that these were the shores of Hokkaido). He was taken in by a kindly group of Ainu and raised by Ebisu Saburo. Though Hiruko was initially a sickly child, he grew legs—and likely his whole skeleton—when he reached the age of three. Now finding himself much more capable, Hiruko learned to walk and began his transformation into the smiling, happy god he is today. Eternally grateful for the generosity and luck that had saved his life, Hiruko—now calling himself Ebisu—began spreading joy and luck to all he encountered. Having never lost his affinity for the sea, Ebisu was always sure to look favorably upon fishermen.

In time, Ebisu became one of the Seven Lucky Gods.

Other origins suggest he is the child of Okuninushi, the kami of magic, or Daikokuten, who may be the same kami.

Some have suggested that Ebisu represents an earlier fishermen’s deity in or around Kansai, or even potentially an Ainu deity. Because he originated completely to Japan, Ebisu is not based on any prior deity in China or India.

His origins are not unlike those of the Greek god Hephaestus, who was born deformed and cast out of Mount Olympus by his mother, Hera.

Ebisu and the Seven Lucky Gods are popular in media across Japan: