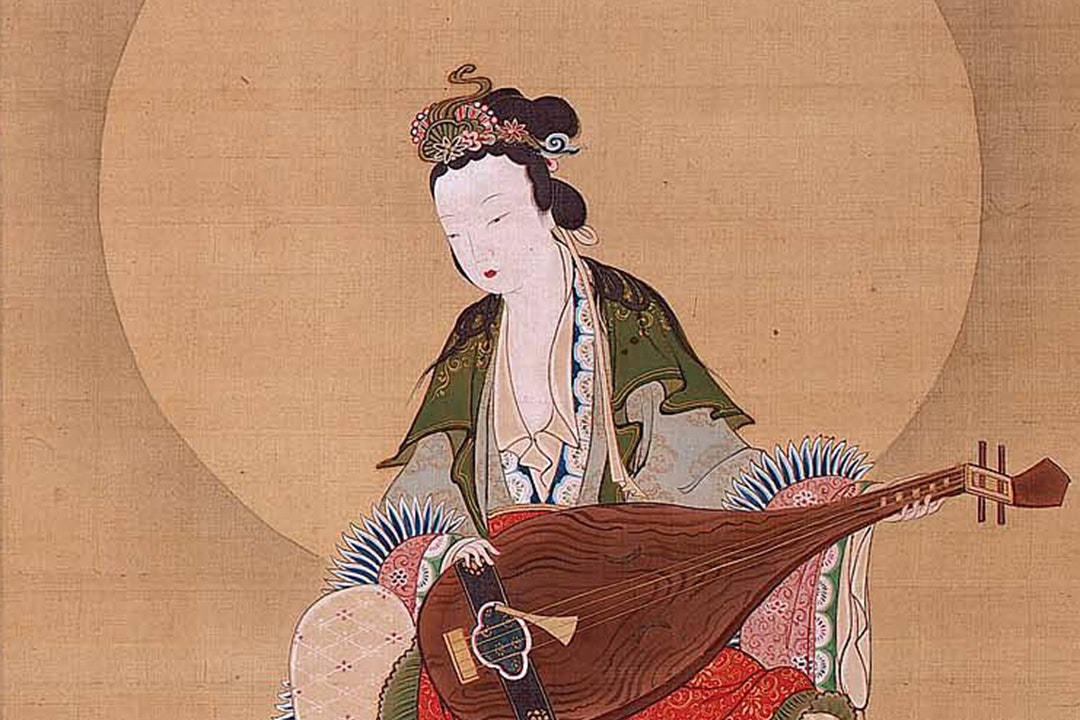 Benzaiten is the goddess of love and luck, a figure of much popularity and meaning across Japan. A manifestation of the Indian goddess Sarasvati, Benzaiten has adapted across landscapes, locations, and time periods, becoming a chief symbol of the way Japanese culture has combined elements from various religious traditions. She is one of the Seven Lucky Gods.

Other names include Benzaitennyo (弁才天女, meaning “Goddess who dispenses wisdom”), and as a kami (a type of god or spirit in the Shinto religion), she is known as Ichikishima-hime-no-mikoto (市杵島姫命, “Heavenly Princess Ichikishima”). Another of her names is Myoonten, “Goddess of Wonderful Sounds.”

This Goddess is the most superb speaker and can make the most subtle distinctions.
-Lotus Sutra, Chapter 40

Benzaiten is both a Buddhist goddess and a Shinto kami (a type of god or spirit), sometimes at the same time depending on the context. She is a form of the Indian goddess Sarasvati, and the spread of Buddhism brought her across the Himalayas into China, where she took on different properties before arriving in Japan. The Benzaiten known in Japan is therefore a mixture of different beliefs, an important figure for many diverse peoples.

Most commonly, Benzaiten is associated with luck and wisdom, dispensing wise words and fortune to those she blesses. She is a joyous figure and is rarely pictured without her biwa, a type of stringed Japanese instrument. She is muse to artists of all varieties, and her blessings are sought by farmers hoping for a bountiful harvest, merchants hoping for good yields, and women hoping for success in love.

During the Edo period (1603-1868), Benzaiten was especially popular with jealous women hoping to gain favor over their rivals. She is a goddess of all that flows: wisdom, music, water, love, knowledge, wealth, and the march of time itself.

Benzaiten commonly appears as a woman dressed either as a courtesan or nun, carrying her biwa and sometimes cloaked in various Buddhist halos and other holy symbols, both physical and spiritual. Beyond that, depictions are varied depending on the time period. Much like Sarasvati, she is associated with both dragons and snakes. Unique to Benzaiten, she is also associated with the appearance of comets in the sky.

Benzaiten, perhaps more than any other figure in Japanese religious life, represents the syncretistic mixture of influences that define Japanese religion. Borrowing from the Shinto kami tradition, Buddhist sectarian beliefs and symbols, Indian and Chinese spiritual life, and the ever-evolving politics of religion in Japan from the 6th century onward, Benzaiten is a unique blend of different beliefs.

Because of this mix, Benzaiten is worshiped at both Shinto shrines and Buddhist temples. She is one of the Seven Lucky Gods, usually the lone female of the group, and is said to join these other deities as they travel around Japan bringing luck, good fortune, and compassion to the people.

Some shrines and temples dedicated to her specifically include Itsukushima in the Seto Inland Sea, Enoshima Island in Sagami Bay, and Chikubu Island in Japan’s central Lake Biwa. These are known as Benzaiten’s Three Great Shrines.

According to the monk Kokei (977-1049), Benzaiten is depicted as the third daughter of the Dragon-King of Munetsuchi, the lake that lies at the center of the world in some Buddhist cosmologies.

Many of Benzaiten’s tales relate back to her origins as Sarasvati, yet she has her own unique history.

Benzaiten’s background changes depending on the context, though most accept her Indian origin as described in the Golden Light Sutra and Lotus Sutra, both of which come from the Asian continent to Japan. In many tales she is the slayer of Vritra, a serpent from the ancient Indian text the Rig Veda, and is the daughter of the Dragon-King of Munetsuchi, located at the center of the earth. Where she is synthesized with local kami, she takes on the tales and features of that deity. She is also one of the Seven Lucky Gods, many of whom are foreign imports to Japan and who have appeared as a collective in story and art since the 1400s.

Benzaiten arrived in Japan during the Asuka period (538 to 710), with the arrival of Buddhism and the Golden Light Sutra. She was present at least by 552, as a comet in that year was associated with her bringing good fortune to Japan. With the rise of Buddhism in the Imperial Family, Benzaiten’s worship also rose. She gained popularity not just with the nobles but the peasants as well, as she became one of the Seven Lucky Gods, revered figures with a popular folk cult around them. In certain places she was syncretized with local kami, often relating to rivers and islands. She also became a popular urban deity, particularly with court musicians and courtesans.

During the Tokugawa era (1600-1868), Benzaiten came to be associated with wisdom, an important virtue to the ruling samurai class. With the rise of State Shinto during the Meiji Restoration (1868-1912), Buddhism was demonized as a “foreign religion,” yet Benzaiten’s cult did not suffer, given how deeply embedded she was in Shinto traditions and the wider Japanese culture. Comparatively, she suffered less neglect than other religious influences from the Asian continent.

Today, Benzaiten remains a popular figure in Japanese spiritual life. Some temples have even taken to selling “modern” representations of the goddess as an anime character, to mixed reception.

Benzaiten is a form of the older Hindu goddess Sarasvati, with the name “Benzaiten” being a Chinese interpretation of Sarasvati’s name in the Golden Light Sutra. Many of Benzaiten’s characteristics—the relationship to dragons and serpents, the compassionate and sensual nature, and the love of music—come directly from this Indian goddess.

In Japan itself, Benzaiten is syncretized with a number of other deities. Ugajin, a harvest kami, is sometimes called Uga Benzaiten and is associated with serpents, much like Benzaiten and Sarasvati.

Reflecting her popular nature, Benzaiten appears in several pieces of pop culture, including: