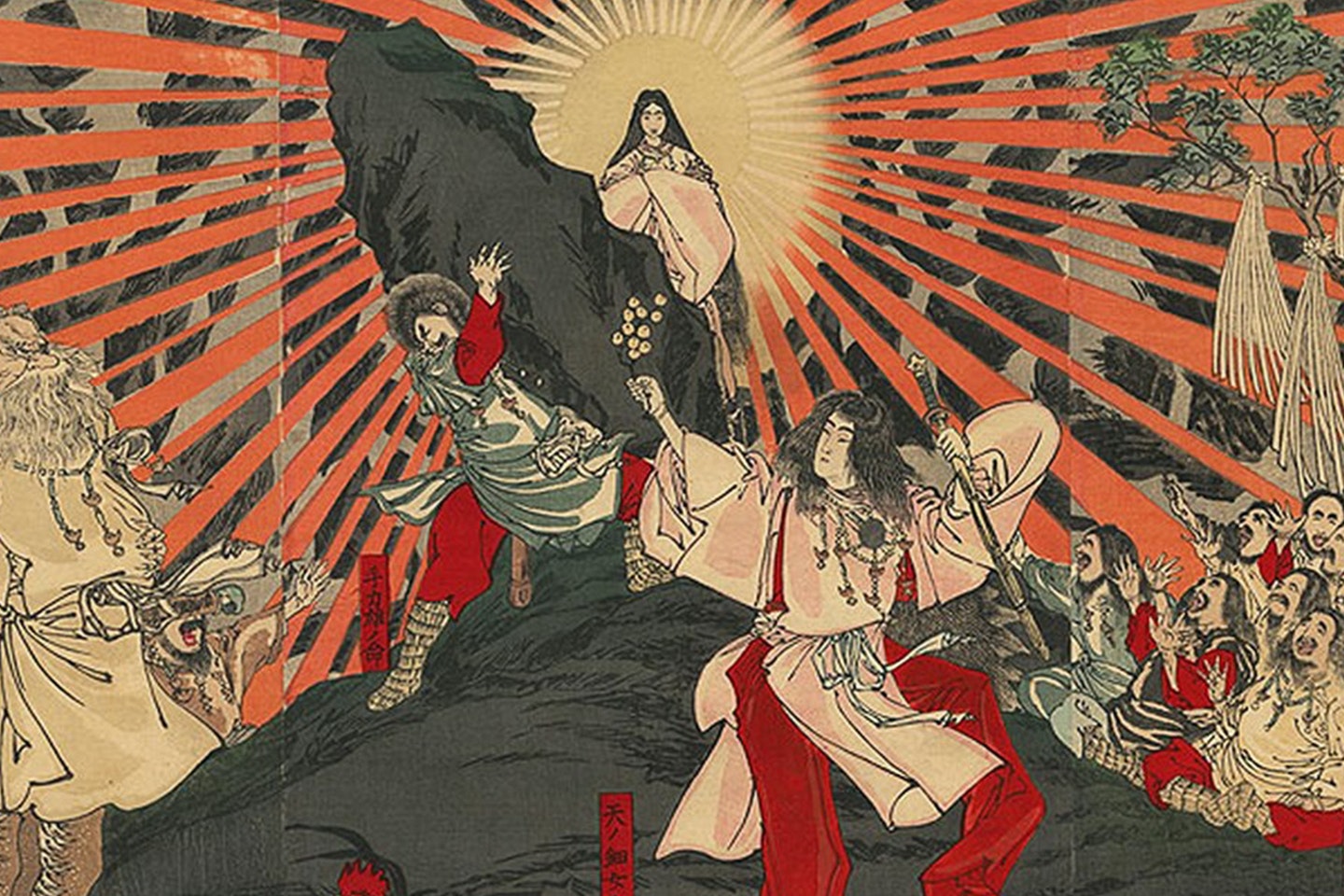 Amaterasu is the great and glorious goddess of the sun. An embodiment of the rising sun and Japan itself, she is the queen of the kami and ruler of the universe. The Japanese Imperial Family claims to have descended from her, and this is what gives them the divine right to rule Japan.

She is the center of Shinto, and Japanese spiritual life.

Amaterasu can be translated as “Shines from Heaven,” with 天 meaning “heaven” (or Imperial) and 照 meaning “shines.” Amaterasu is shorthand for Amaterasu-ōmikami, which can be represented in Kanji as 天照大神, 天照大御神, and 天照皇大神. This longer version means “the great and glorious kami who illuminates from Heaven.” The most prominent of her titles is Ōhirume-no-muchi-no-kami (大日孁貴神), meaning “the great sun of the kami.”

Amaterasu is the Queen of Heaven, the kami, and creation itself. Though she did not create the universe, she is the goddess of creation, a role she inherited from her father, Izanagi, who now defends the world from the land of the dead.

#Goddess of the Rising Sun

Amaterasu’s primary role is that of the sun goddess. In this position, she not only serves as the literal rising sun that illuminates all things, but also provides nourishment to all living creatures and marks the orderly movement of day into night.

The sun represents order and purity, two of Shinto’s most important concepts. All things in creation are ordered, from Amaterasu down to the denizens of Jigoku and other hells. This order is reflected in Japanese society as well.

The Japanese Imperial family, which claims descent from Amaterasu, sit at the head of Japanese society, and from the Imperial family a natural hierarchy exists. In pre-modern Japan this was one of the many justifications for the society’s caste system.

Through Amaterasu’s illumination, she represents not just order, but the justice that maintains it as well. The Imperial family has long served as the legitimizing power of any Japanese political entity, and they have always used this position to ensure that Amaterasu’s place as Queen of Heaven and her control of its courts are reflected in their rule. Thus, the earthly court systems and the justice they represent are reflections of Amaterasu’s divine justice, though she herself is not the goddess of justice - merely its final arbiter. She maintains harmony and balance in both the natural world and human society.

Amaterasu has always been an important—if not the most important—kami in Japanese spiritual life. Prior to the Meiji Restoration, when Shinto was not yet formalized, Amaterasu was important across most of Japan. It was only after Shinto was formally recognized as a state religion, however, that Amaterasu’s role was solidified and the Imperial family set once more as head of the now-democratized Japan.

Though State Shinto was abolished in the years after World War II, Amaterasu and the Imperial family remain an important part of Japanese spiritual life. Some scholars assume, based on archaeological evidence, that the prehistoric sun cult that occupied the region may have worshipped some incarnation of Amaterasu.

The Imperial family possesses three holy relics that come directly from Amaterasu herself. Together, these relics are known as the Imperial Regalia of Japan:

Another shrine, Amanoiwato Shrine in Takachiho, Miyazaki Prefecture, is said to be near the gorge where Ama-no-Iwato, the cave where Amaterasu hid herself from the world, can be found.

Amaterasu is one of the three kami born from Izanagi’s purification following his attempt to free his wife from the land of the dead. The three deities were born as he washed himself: Amaterasu from his left eye, her brother-husband Tsukuyomi from his right eye, and storm god Susanoo from his nose. Though these are her primary siblings, Amaterasu has many other brother and sisters born of Izanagi and Izanami’s marriage rituals.

Though the parentage of her children is unclear, Amaterasu is thought to have had them with her husband, Tsukuyomi. Their children include Ame no Oshihomimi, whose son Ninigi was given to Japan by Amaterasu; Ninigi’s great-grandson, Jimmu, would go on to become the First Emperor of Japan (r. 660-585). Thus, the bloodline from Amaterasu to the Imperial family can be reliably traced from the 7th century up to the modern era.

Tales of Amaterasu appear in the Kojiki and Nihon Shoki, which relate the mythological origins of the universe and the birth of Japan as an empire.

#The Birth of Amaterasu

From the mists of time emerged two deities, Izanagi-no-Mikoto and Izanami-no-Mikoto, the divine male and female gods of creation. Seeking to fill the misty void, they devised the marriage ritual and engaged in sex, but had to repeat the ritual due to a mistake on Izanami’s part. This second, successful attempt yielded a multitude of kami, spiritual beings representing the natural world and the islands of Japan. The last of these beings—fire—subsequently killed Izanami.

Wrought with grief, Izanagi journeyed to Yomi, or “the shadowy land of the dead.” Searching far and wide, he eventually found his wife and was shocked to find her rotting flesh full of oni and other demons. Seeing his rejection of her, Izanami flew into a rage and attempted to chase him past the gates of death; however, he managed to block the gates with a boulder. Izanami swore that if he left her there, she would kill one thousand people every day. He replied that, each day, he would create five hundred more lives than she could destroy, thereby ensuring the survival of earth’s population.

Disgusted by the taint of death that lay upon him, Izanagi found a pool of pure water nearby and bathed himself in it. As he washed his left eye, Amaterasu emerged, fully-grown and glowing with the light of the sun. He washed his right eye next, and from it emerged the shining Tsukuyomi, the moon who reflected his sister’s light. As he cleaned his nose, a storm emerged and took the shape of Susanoo, the storm god and ruler of the seas. These three Izanagi tasked with ruling the heavens, with Amaterasu as their leader.

As was the natural order of things, Amaterasu married her brother Tsukuyomi and together they ruled the day and night. The marriage produced children, but Tsukuyomi lacked Amaterasu’s naturally glowing disposition. Whatever goodness he had was merely a reflection of her light. Ultimately, Tsukuyomi revealed his true colors at a banquet when the goddess Uke Mochi created a bounty from which food could be grown. After she spat fish into the sea and game into the forests, she proceeded to pull crops from her rectum. Disgusted by her actions, Tsukuyomi killed her on the spot.

Amaterasu rejected her husband’s disgust and banished him for his evil actions. Thus, day and night became separated for all eternity.

#Amaterasu and the Cave

Though Izanagi tasked all three of his children with ruling the heavens, Amaterasu’s claim was strongest - as Izanagi’s first born, she held the divine right to rule. The youngest of the three, Susanoo, resented his elder sister’s right to rule and questioned it openly. Eventually, Susanoo’s arrogance led his father Izanagi to banish him.

Before his departure, Susanoo went to bid his sister goodbye. When his actions were met with suspicion by Amaterasu, Susanoo issued a challenge to prove his sincerity. As the challenge began, Susanoo took Amaterasu’s necklace as she took his sword. Using these vessels, they each birthed goddesses: Amaterasu produced three goddesses from the Heavenly Blade while Susanoo produced five gods from the Grand Jewel. Since she owned the Grand Jewel and more gods were birthed from it, Amaterasu claimed she had won the challenge.

Outraged by her claim, Susanoo went into a rampage, destroying much of Heaven and earth. He annihilated Amaterasu’s personal rice fields and threw animal carcasses about, even going so far as to throw a pony at her loom. One of Amaterasu’s personal attendants died during the rampage, causing an already angry Amaterasu to mourn as well. Ashamed that her actions had led to such chaos, she fled to a cave now known as Ama-no-Iwato, the Heavenly Rock Cave. With Amaterasu in hiding, the world plunged into darkness and chaos. Thus began the first winter, a hard time for a world used to basking in the sun.

The kami looked down upon the world and, seeing the chaos left in Amaterasu’s absence, decided they must bring her back. Though they asked her to return and described the chaos caused by her absence, Amaterasu refused to listen and blocked the cave entrance with a rock. After almost a year, wise Omoikane determined that if she would not come out of her own volition, they would have to lure her out with curiosity. To this end, a grand party was thrown.

The plan worked, as the music, dancing, and joyous cries of the gods did indeed peak Amaterasu’s attention. The noise intensified when the dawn goddess Ame-no-Uzume performed a particularly revealing dance. Curious, Amaterasu drew closer to the cave entrance and there discovered an Eight-Fold Mirror. Fascinated by the light of her own reflection, Amaterasu at last came to the mouth of the cave. It was at that moment Omoikane drew back the stone that blocked the entrance.

As he did so, Amaterasu’s light reentered the world, illuminating the chaos that had been left in her wake. Winter ended at last, and spring and summer brought life back to Japan. Ashamed, she begged forgiveness for her actions. It was given freely, for Susanoo’s behavior had been nothing less than abhorrent. His banishment was henceforth carried out, and Amaterasu returned to heaven. She later reconciled with her brother, who gave her the Heavenly Blade as a gift.

In time, Amaterasu sent her grandson Ninigi to rule the earthly realm after her son refused. She gave him the Imperial Regalia, which helped Ninigi to establish a kingdom of justice and harmony. His great-grandson Jimmu became the First Emperor of Japan, and ruled with the Imperial Regalia as a sign of his divine right and lineage.

Japanese historical records connect Amaterasu with the shaman/priestess Himiko, and some scholars connect her with both the proto-Imperial family of the 5th century and the sun cult that ruled prior to the establishment of early Shinto beliefs.

Elsewhere in the world, Amaterasu is similar to the Norse Sól (also known as Sunna), a rare sun goddess in a world full of sun gods. Like Amaterasu, Sól is siblings with the moon and promotes order and harmony in the world.