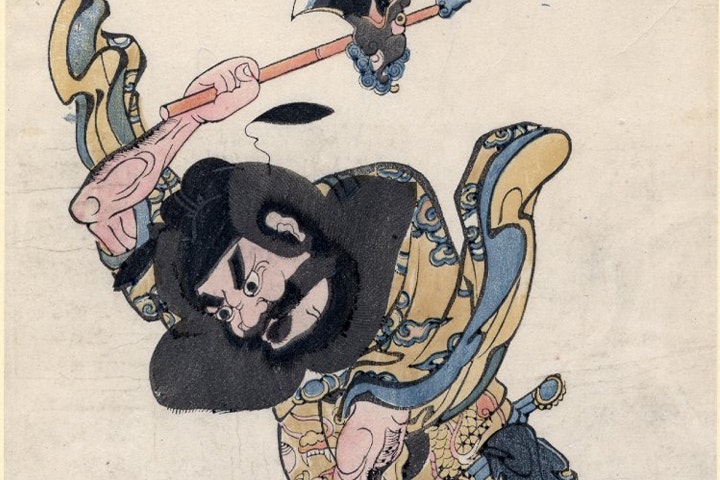 Known as the Demon Hunter and King of Ghosts, Zhong Kui (鍾馗) is a Chinese folk hero who fights ghosts and hunts demons. Legend has it Zhong Kui commands more than 80,000 ghosts and demons himself. His name is comprised of the surname zhōng (鍾) and kuí (馗), a word which means “crossroads.”

Zhong Kui’s legend was a tragic one. In ancient times, Zhong Kui and his friend, Du Ping (杜平), took the imperial exams. Although Zhong Kui scored at the top of his class, he wasn’t awarded a position in the emperor’s government. Instead, he was stripped of all honors because of his unsightly appearance—he had a square face, fish-like eyes, and unkempt hair. He was so upset about the injustice done to him that he threw himself at the gates of the palace until his skull broke.

Du Ping took his friend’s body home and laid him to rest. While in Hell, Yan Wang (閻王) saw Zhong Kui’s potential and named him the King of Ghosts. Zhong Kui then vowed to use his new status and supernatural abilities to protect the emperor, and all other humans, from demons and ghosts.

Zhong Kui is still a popular protective deity whose likeness is often hung on the doors of homes and businesses to defend against malevolent spirits. People seek his help during the Chinese New Year when they ask him to watch over their homes and families in the coming year and ward off ghosts and demons that may threaten them.