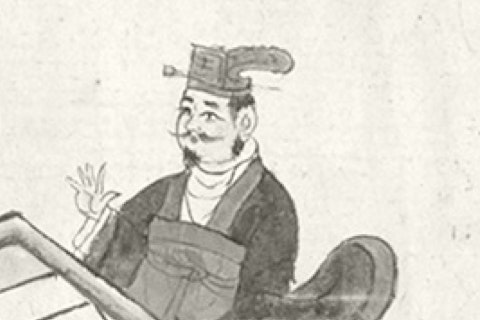 In Chinese mythology, Yan Wang (閻王) is the King of Hell. Yan Wang oversees the underworld, presides over the ten layers of Diyu (地獄), or the Chinese-Buddhist Hell, and judges the fate of the dead. He is one of the most feared gods in the belief system.

Yan Wang was originally a Hindu god named Yamaraja who first appeared in the Rigveda. With the advent of Buddhism, stories of Yan Wang spread throughout East Asia. The legend of Yan Wang gradually evolved as the original myth mixed with local beliefs, a process known as religious syncretism. Yan Wang can be found in just about every culture where Buddhism is practiced and is an important figure in countries like Tibet, Vietnam, Korea, and Japan. Although he maintained his role as Lord of the Dead in China, Yan Wang’s appearance drastically changed to adapt to the dominant Han-Chinese culture.

Yánwáng (閻王), his most common Chinese name, simply means King Yan. Yan Wang’s full name is Yán Luó Wáng (閻羅王), which is a transcription of his Sanskrit name, Yamaraja. In Western texts, Yan Wang is often referred to as Yama, and in other styles of romanization can be written as “Yen Lo Wang.”

King Yan has a fearsome appearance with great big, bulging eyes, deep red skin, a severe expression, and a long, black beard. He is usually depicted wearing traditional Chinese robes and a judge’s cap inscribed with the word “king” (王) on it.

Yan Wang doesn’t have any known family. Instead, he is always accompanied by his scribe who carries a calligraphy brush and a large book that contains the name and date of death for every person that ever lived and will ever live. The two fearsome guardians of Hell, Ox-Head (牛頭) and Horse-Face (馬面), also like to keep Yan Wang company and are tasked with the job of bringing recently-deceased souls before him so that he can determine their fate.

In the Chinese-Buddhist belief system, there were ten layers of Hell known as Diyu (地獄). Similar to Dante’s Inferno, each layer was progressively more terrifying than the last, and was presided over by a lord. Yan Wang, the most powerful Hell deity, ruled over all of Diyu. The eighth century Buddhist poet, Hanshan, warned the living to lead virtuous lives so they could avoid being punished by Yan Wang:

I urge you, put an end to your comings and goings;
Never vex him, old Yan Wang.
Lose your footing, and you’ll fall into the three evil paths
Your bones will be ground into powder, having been pounded one thousand times!
For a long time you’ll be a person in Hell
Forever cut off from the ways of this life.

Unlike the Christian belief system, there was no way to avoid going to Diyu after death. The good news was that souls were not damned to be punished for all of eternity. The type and length of punishment was determined by the severity of one’s crimes.

Virtuous souls were sent to live in Heaven for a certain amount of time before returning to Earth as a human or exiting the cycle of reincarnation. Sinful souls were then thoroughly questioned by Yan Wang and asked if they considered the spiritual consequences of their actions. After admitting they did not, sinners were then condemned to wander aimlessly through the mazes of Hell before arriving at their punishment, of which, there were plenty.

Hypocrites were condemned to be steamed to death in large metal pots. Arsonists were bound and tied to pillars of red hot, glowing copper. Murderers who stabbed someone to death were doomed to eternally climb mountains of razor sharp knives. The cruelest and lowest level of Diyu was reserved for those who have committed the most heinous of crimes, called the Five Grave Offenses, which included matricide, patricide, the killing of an enlightened being, shedding the blood of a Buddha, or creating a schism within the Buddhist community. These sinners were dealt with personally by Yan Wang, and were doomed to become lesser animals or insects in their next life.

However, Yan Wang himself was not immune to the punishments of Hell. He was a soul doomed to live in Diyu just like everyone else. When he was not passing judgement, Yan Wang was strapped down to a scorching hot metal surface three times a day while a stream of molten metal was poured down his throat, which explains why his skin was so red.

Despite the fact that he’s decidedly terrifying, Yan Wang was not an evil deity. In fact, in some versions of Yan Wang’s myth, he’s demoted to the status of Fifth King of Hell because he was too lenient. In some interpretations, Yan Wang was actually seen as a title, not a singular person. Once a King of Hell served out his sentence in Hell, he’s able to reincarnate on Earth again or leave the cycle entirely. In some texts, mortals were rewarded with the position of King of Hell after they committed honorable deeds.

After a death, it’s traditional for people to burn “Hell money” (also known as joss paper) so that their friends and family will be well provided for in the afterlife. Souls that are wandering the mazes of Hell are said to still need money to buy food and other goods to help them along their journey. Burning joss paper is considered to be a very normal part of the funeral and grieving process. Yan Wang’s likeness is often seen on “Hell money.”

Because of his popularity and his status as a universal death god across Asia, Yan Wang has been featured in a number of shows. Most notably, he was a character (King Yemma) in Dragon Ball Z and is called King Enma in Yokai Watch.