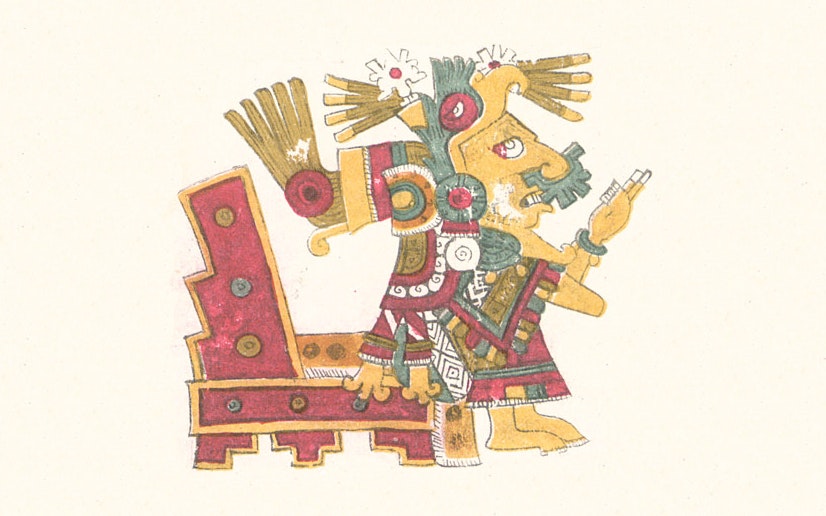 Xochiquetzal (pronounced Show-chee-ket-zal) was the Aztec goddess of fertility, sexuality, pregnancy, and traditional female handicrafts such as weaving. She was also heavily associated with the moon and the various lunar phases.

Xochiquetzal’s name was a combination of the Nahuatl words xochitl, meaning “flower,” and quetzalli, meaning either “Quetzal bird,” or the highly desirable tail feathers of that bird.1 Taken altogether, her name was often interpreted as “Flower Quetzal Feather.”2

Xochiquetzal was also occasionally referred to as Ichpochtli, meaning “maiden” or “young girl.” Though this term did not originally imply anything beyond age, it took on a virginal connotation following the Spanish conquest.3

Xochiquetzal is unique amongst Aztec goddesses in that she was always portrayed as a young woman. Her peers, like Coatlicue, were usually shown as matrons. In artistic renderings, Xochiquetzal was usually adorned with flowers and shown wearing rich garments.

The link between Xochiquetzal, flowers, and sexuality was not an arbitrary one. Like many other cultures, the Aztecs drew parallels between flowers and the clitoris or vulva.

Though Xochiquetzal is one of the oldest Aztec gods, her origin story remains unclear. She was an important member of the Aztec pantheon and one of several literal and figurative mothers to the Aztec people. A recurring element in Xochiquetzal’s legends was her relation to the moon. Such relations changed depending on the myth being told, however, as she would reflect different aspects of the lunar cycle in each tale.

While many Aztec gods had explicit origin stories, Xochiquetzal did not. While it was possible that the Aztecs lacked an origin story for her, it is more likely that it has simply been lost to time and conquest. Xochiquetzal was said to have come from Tamoanchan, the ancestral origin place of the Aztec gods.5 Her connection to Tamoanchan hinted at her enduring status in Mesoamerican religion; Tamoanchan was not a Nahuatl word, but a Mayan one.

The goddess of the moon moves swiftly across the sky...seemingly visiting different planetary lovers along the way, before returning to stay with her solar husband for several days each month. - Susan Milbrath6

Xochiquetzal and the Creation of the Second Woman

During their quest to create the universe, Xipe Totec, Tezcatlipoca, Quetzalcoatl, and Huitzilpochtli created the first man and woman. When their son Pilcetecli came of age, however, there was no one for him to marry. Seeing that this problem needed to be remedied, the gods “made of the hairs of Suchiquecar [Xochiquetzal], a woman with whom his first marriage took place.”7

Flowers for the Land of the Dead

One Aztec legend described the risqué origins of bats and how they, along with an unwitting Xochiquetzal, were responsible for Mictlan’s foul odor.

The first bat was born when Quetzalcoatl’s semen dripped onto a rock while he was washing. The gods sent the bat to bite out the vulva of the young goddess Xochiquetzal, from which they grew nasty-smelling flowers to present to Mictlantecuhtli.8

In some Aztec stories, Xochiquetzal was the wife of the sun, which would spend the night traveling through Mictlan before returning the next day. This connection could explain Xochiquetzal’s involvement in this odd tale.9

Pregnancy and weaving were connected through the idea of a spindle. As a weaver worked, the spindle gradually became more round. As a pregnancy progressed, the mother-to-be’s belly would grow rounder as well. As a lunar deity, Xochiquetzal had an additional link to pregnancy; the moon also grew rounder over the course of its cycle.

Hueypachtli, sometimes called Tepeilhuitl, was an annual festival held primarily to honor Tlaloc; Xochiquetzal’s cult also partook in the celebrations.11 During this festival, Xochiquetzal was “honored with flower offerings, drinking, and ‘fornications.’”12 As was common in Aztec festivals, an ixiptlatli or impersonator was chosen to represent Xochiquetzal.

The ixiptlatli was a young woman who would be decapitated and flayed. A man was selected to wear her skin and weave (an act typically reserved for women) in a representation of “the gender ambiguity embodied in the cult of lunar deities.”12

Xochiquetzal, Yappan, and the Origin of Scorpions

Much like the Biblical Eve, Xochiquetzal was the first woman to sin in Aztec mythology. In line with her licentious reputation, Xochiquetzal seduced her brother Yappan, who had taken a vow of chastity. Xochiquetzal went unpunished for her actions while Yappan was turned into a scorpion for his insolence.13

The Mexican artist Rurru Mipanochia named her 2017 art exhibit Xochiquetzal: Erotismo y Procreation after Xochiquetzal. Her work embraced the “gender and sexual emancipation of millennial Mexico City,” and the freedom to choose one’s own sexuality without concern for conservative social mores. As the goddess of eroticism and female sexual power, Xochiquetzal was uniquely suited to represent Mipanochia’s work.14