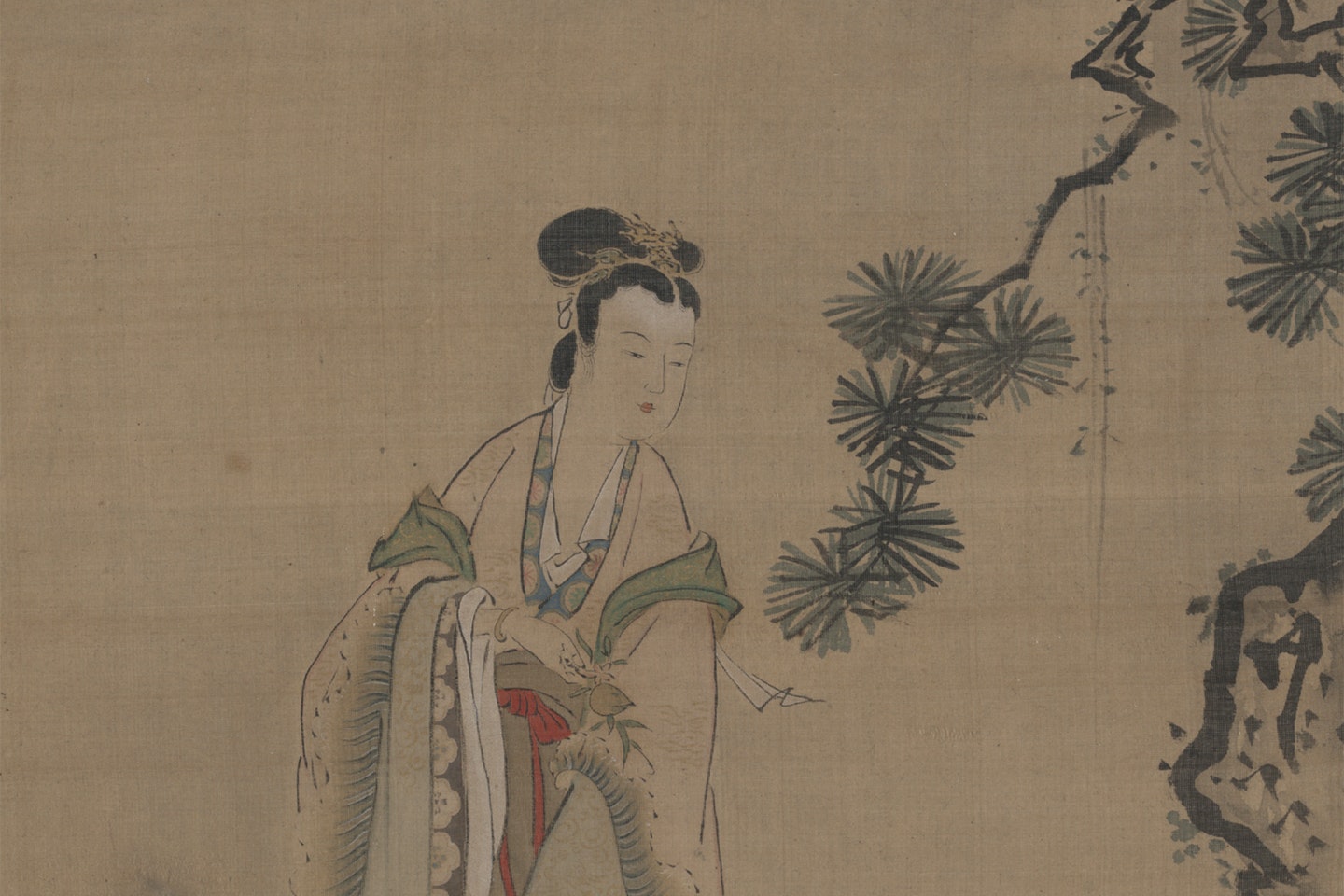 Xiwangmu (西王母), or Queen Mother of the West, is one of the most ancient and powerful goddesses in the Chinese pantheon. She has complete control over life, death, creation, and destruction. She is married to the Jade Emperor (玉皇) and tends to the Peaches of Immortality in their palace gardens. Xiwangmu is thought to have once been a wild demon that lived in the mountains and caused cataclysmic disasters. After repenting her evil ways, she achieved enlightenment and became a goddess.

The twelfth chapter of the famous Chinese text Shan-Hai Jing, or the Classic of Mountains and Oceans, describes Xiwangmu as a mysterious yet powerful deity:

She is the controller of the Grindstone and the Five Shards constellations of the heavens. Xiwangmu rests on a stool and wears an ornament on her head. She holds a staff. In the south, there are three birds from which Xiwangmu takes her nourishment. They are found to the north of the Kunlun mountains.

Like other high ranking deities, Xiwangmu has many names and honorary titles. Her most common name is simply xī wáng mǔ (西王母). Xī (西) is the Chinese character for West, wáng (王) is an honorific title reserved for gods and emperors, and mǔ (母) simply means “mother.” Xiwangmu’s name is most often interpreted as “Queen Mother of the West.”

In early Chinese texts, Xiwangmu had a wild, almost feral appearance befitting her ferocious personality. Around the Tang Dynasty, however, popular opinion surrounding Xiwangmu began to shift dramatically. Texts now described her as having the appearance of a human woman, though she retained some beastly traits—notably, tiger’s teeth and a leopard’s tail. Xiwangmu is often depicted wearing a headdress that she uses to hide her wild, untamed hair.

Xiwangmu is married to the Jade Emperor (玉帝). While they are said to have an enormous amount of children, three of their daughters take prominence above all others. These daughters include Zhu-sheng-niang-niang (注生娘娘), a fertility goddess that helps couples in need of children, Yen-kuang nian-niang (眼光娘娘), the protector of the blind who could grant eyesight to those in need, and Zhinü (織女). Perhaps the couple’s most famous daughter, Zhinü infamously fell in love with a human; this story eventually led to the creation of Chinese Valentine’s Day.

During her time as a mountain demon, Xiwangmu had a lover named Dongwanggong (東王公). While Xiwangmu ruled the west, Dongwanggong ruled the east. In some versions of the Chinese creation myth, the two lovers created humanity through their union.

Xiwangmu is the highest ranking and most powerful female deity in the Chinese pantheon. She determines the lifespan of every living being, tends to the Peaches of Immortality, and manipulates the occurrences of major calamities, among other duties.

Because Xiwangmu’s story is so ancient, her origins as a deity are unclear. In early Chinese dynasties, Xiwangmu was seen as a demonic figure who caused floods, disease, and other major disasters. Popular opinion around Xiwangmu began to change around the time of the Tang Dynasty, however. Following this shift, she was seen as a repentant, benevolent goddess.

Xiwangmu lives in a forested garden in the Jade Emperor’s palace together with nature spirits, magical beasts, and her ladies in waiting. In her free time, she tends to the Peaches of Immortality and other rare herbs and plants. Every year on her birthday, Xiwangmu invites all of the immortals in heaven to a party and gives each of them a peach so that they can continue living eternal lives.

Xiwangmu is also known for being somewhat unpredictable. While the Jade Emperor is the embodiment of yang—the rational, level-headed, masculine energy in yin and yang—Xiwangmu is the wild and untamable embodiment of feminine yin energy.

Much like her daughter Zhinü, the seamstress who fell in love with a cowherd, Xiwangmu is a talented weaver and is said to weave the stars into the sky each and every night.

#Journey to the West

In Journey to the West, the Monkey King, Sun Wukong (孫悟空), a rebellious god who repeatedly defies the authority of the Jade Emperor, was put in charge of Xiwangmu’s Garden of Immortality—a very important task seeing as her peaches only ripened once every 3,000 years.

Instead of guarding the peaches, however, Wukong ate them all in an act of defiance. Wukong was subsequently banished from heaven by Buddha and pinned underneath a mountain for 500 years.

One of the most popular Chinese myths is the story of the archer Hou Yi (后羿) and his wife Chang’e (嫦娥). When the earth was still young, there were ten suns in the sky. It was incredibly hot all the time and there was no such thing as night. Using his talent for archery, Hou Yi shot down nine of the ten suns.

To reward him for his efforts, Xiwangmu gave Hou Yi an elixir of immortality. Before he was able to drink it, however, Chang’e stole the vial for herself. Fearing her husband’s wrath, the now immortal Chang’e fled to the moon.

Absence made the heart grow fonder, and Hou Yi soon found himself missing his wife dearly. He missed her so much that he started leaving sweet treats—including moon cakes and fruits—out each night to appease her. This tradition continues to this day. Each year during the Mid-Autumn Festival, the Chinese people leave offerings to Chang’e, the spirit of the moon.

Xiwangmu is the only deity in the entire Chinese pantheon with the ability to talk directly to humans. Her peach tree, with its long roots and tall branches, serves as an intermediary between earth and heaven. Xiwangmu would not speak to just anyone, however. When she did speak to humans, Xiwangmu would speak exclusively to Chinese emperors in order to give them the Mandate of Heaven and teach them the secrets of immortality.

The Mandate of Heaven was considered the emperor’s divine right to rule. The first emperor to claim the Mandate of Heaven had been delivered to him by Xiwangmu was Emperor Shun of Shanxi. On the day he was crowned, five planets were said to have aligned.

In most of her interactions with the earthly kings, Xiwangmu took on the role of a Daoist master. Though Xiwangmu would do her best to teach them her secrets to immortality, the emperors would always fail her tests and remain mortal.

Xiwangmu is a very popular deity, especially among Daoists. Because Xiwangmu holds power over health and fertility, celebrating her holiday (which falls on the annual autumn equinox) is very important.

An especially popular figure amongst women, Xiwangmu is considered to be a mythological feminist icon thanks to her vast powers, wild nature, and strong independent streak.

Outside of traditional mythology, Xiwangmu has been featured in several notable works. She is a character in Orson Scott Card’s novels Xenocide and Children of the Mind, and also appears in the video games Shin Megami Tensei and Emperor: Rise of the Middle Kingdom.