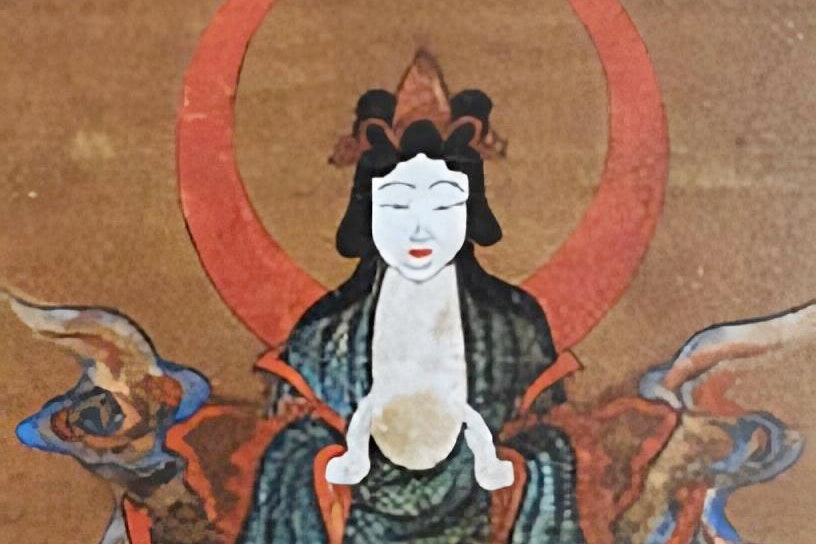 Tsukuyomi-no-Mikoto is the Japanese god of the moon, a proud deity of order and beauty. The estranged husband of the sun goddess Amaterasu, Tsukuyomi spends eternity chasing her across the sky.

Tsukuyomi, sometimes called Tsukuyomi-no-Mikoto (the great God Tsukuyomi), is rendered as 月読尊, or simply 月読 in Kanji. This name directly translates to “moon-reading,” a popular practice in the noble courts of pre-modern Japan where parties would stay up all night moon-gazing and reading poetry. An alternate Kanji reading is tsukuyo, moon-light, and mi, watching. Sometimes he is called Tsukuyomi Otoko (月讀壮士) or Tsukuhito Otoko (月人壮士), meaning “moon-reading man.”

Tsukuyomi is very much a match for his wife Amaterasu. Beautiful and serene, he believes in order and etiquette and enforces them whenever he can. His enforcement of such ideals extends to the point that he is willing to kill to maintain order, despite killing itself being a breach of etiquette in the heavenly court. Thus, there is irony in Tsukuyomi’s strict adherence to etiquette: to enforce it, he is willing to break it.

Though the moon is often regarded as beautiful and worthy of viewing, Tsukuyomi himself is seen as a negative figure in Shinto and Japanese folklore. This does not prevent him from having shrines, however, such as one at Matsunoo-taisha in Kyoto.

Tsukuyomi and his siblings Amaterasu and Susanoo were born of the purification ritual Izanagi underwent following his trials in Yomi. Tsukuyomi married his sister Amaterasu, though it is unclear if he is the father of her children. According to some interpretations, Tsukuyomi may be the forefather of the Japanese Imperial Family; however, this is not a commonly held belief.

Tsukuyomi’s appearances in Japanese mythology are brief, but important.

Izanagi, having failed to returned his wife from Yomi, the Land of the Dead, placed a boulder at its entrance to prevent her escape. Soaked in the impurities of Yomi, Izanagi sought to purify himself at a nearby hot spring. As he washed his eyes and nose, three kami were born: Amaterasu from his left eye, Tsukuyomi from his right, and Susanoo from his nose. Izanagi labeled these three gods among the most important of the kami, and decreed that they would rule the Heavens.

Together, the siblings climbed the Heavenly Pillar and ruled the Heavens. Tsukuyomi married his sister Amaterasu, and ruled as her consort.

The Death of Uke Mochi

Uke Mochi, the goddess of food, held a great feast. Though she was invited, Amaterasu was unable to attend and thus sent her consort, Tsukuyomi, in her stead. He watched as Uke Mochi began to create the feast, but found her methods to be incredibly repulsive. She spit fish, rice, and deer from her mouth before pulling food out of her other orifices. Tsukuyomi was so horrified by her actions that he killed her then and there.

When word reached Amaterasu, she was horrified and labeled her husband an evil kami, unworthy of returning to the Heavens. This separation of Tsukuyomi and Amaterasu was the origin of day and night. For all eternity, Tsukuyomi will continue to pursue Amaterasu across the night sky without ever reaching her; even during an eclipse, the sun will run from the moon.

As a rare moon god in a world filled with moon goddesses, Tsukuyomi is relatively unique. While his position in mythology is not entirely unique—the Egyptian Khonshu, Norse Mani, Hindu Chandra, and Chinese Jie Lin stand as his peers—Tsukuyomi’s prominence as the former consort-king of heaven is unmatched.

Tsukuyomi appears across popular culture in several forms, including: