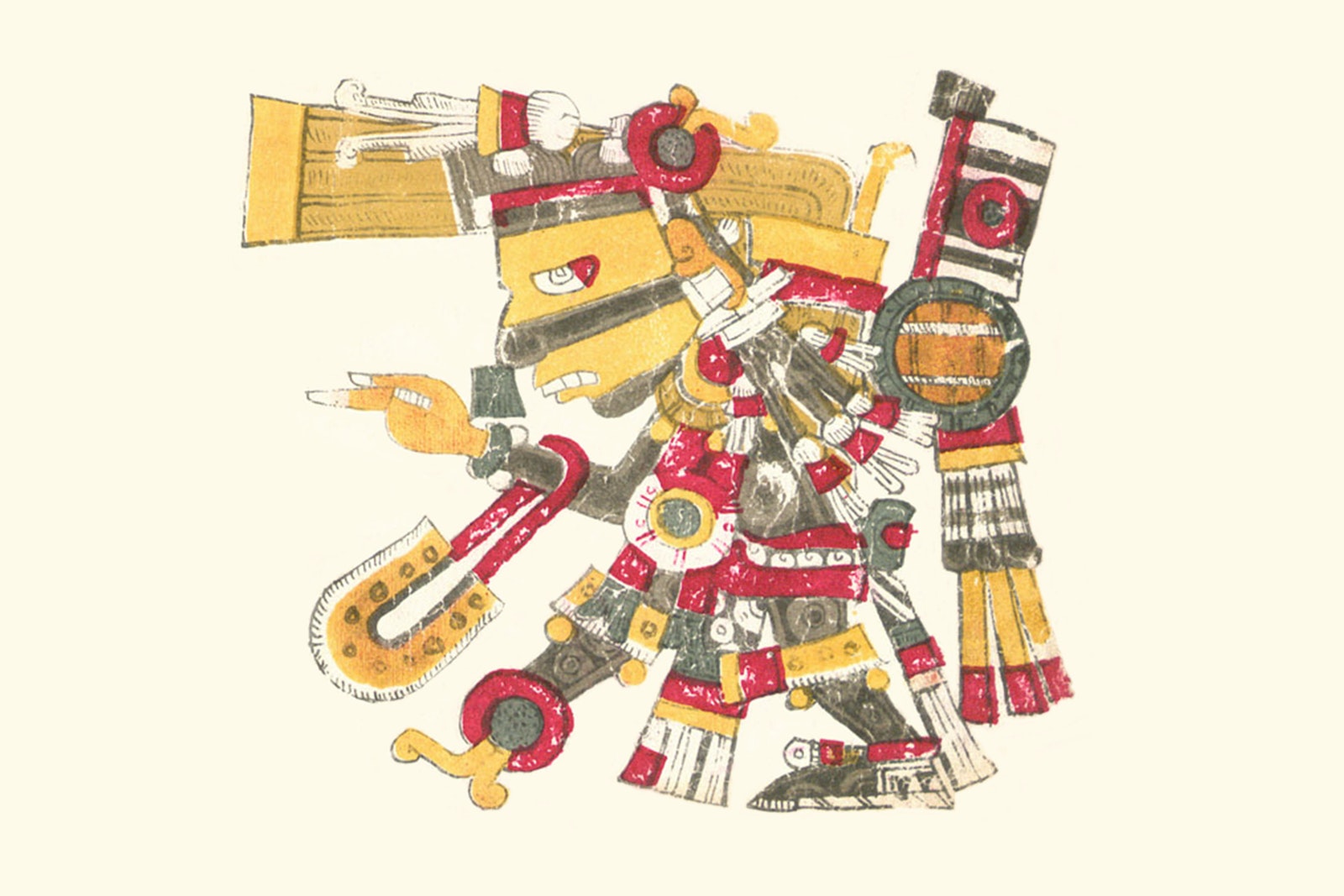 Tezcatlipoca (pronounced Tez-kat-lee-po’-ka), an omnipresent god capable of shapeshifting into a jaguar, was an incredibly important member of the Aztec pantheon. He ruled over the modern age, having usurped his younger brother Quetzalcoatl through trickery. As with his elder brother Xipe Totec, the Aztecs offered Tezcatlipoca annual human sacrifices.

In Nahuatl, Tezcatlipōca meant ‘smoking mirror;’ this name referred to the obsidian mirrors that the Aztecs used during ceremonial divination. Depictions of Tezcatlipoca frequently replaced one of his feet with an obsidian mirror.

As with many Aztec gods, Tezcatlipoca had multiple names and titles. Several of his alternative names, Titlacauan and Ipalnemoani, refer to his important status among the Aztecs, literally meaning “We are his slaves” and “He by whom we live,” respectively. Tezcatlipoca’s other names included:

A key element of Tezcatlipoca’s power was his omnipresence. He was often represented by an obsidian mirror, though his power extended far beyond obsidian. Any reflection was a portal through which he could view the world. Obsidian was used for more than just its reflective properties, however. Ritual blood-letting and even human sacrifice were conducted with obsidian blades. Such rituals all connected back to Tezcatlipoca.

Whether it emanated from a ceremonial censer or a natural source such as a hot spring, smoke and steam always signified Tezcatlipoca’s presence. Tenochtitlan, the seat of the Aztec empire, was located in a volcanic region, where smoke and venting steam would have been commonplace. On a clear day, the active volcano Popocatépetl would have been visible from the city, and as such, Tezcatlipoca would have always been able to keep an eye on Tenochtitlan

Tezcatlipoca was also heavily associated with jaguars, and many believed he possessed the ability to shapeshift into one. A nighttime encounter with one of these large cats, or even a dream of such, was believed to have been a brush with the god.3

In artwork, Tezcatlipoca is usually identifiable by his missing left leg, the presence of an obsidian/smoking mirror (often replacing the missing leg), and a horizontal black band across his eyes.

Tezcatlipoca was a god of exceptional significance amongst the Aztec pantheon. Apart from being a creator deity, he also ruled over the modern age. He feuded with his brother Quetzalcoatl and emerged victorious after tricking his younger sibling into shaming himself.

Creation of the World

After being born to Ometecuhtli and Omecihuatl, Tezcatlipoca spent 600 years waiting for his youngest brother, Huitzilopochtli, to grow flesh. After his brother was made whole, Tezcatlipoca and his brother Quetzalcoatl created the world.5

While some of the legends say that Tezcatlipoca and Quetzalcoatl worked together, most tales described them as working towards the same goal in opposition to one another.

Before the world was created, all that existed were a few gods, a massive ocean, and the sea monster/crocodile Cipactli. One day, Tezcatlipoca lured Cipactli close to him by using his foot as bait. Then, together with Quetzalcoatl, he trapped Cipactli and created the world from its body. Tezcatlipoca’s actions were costly, however; he lost his left foot in the process.

The antagonism between Tezcatlipoca and Quetzalcoatl began to grow shortly after the former turned himself into the first sun. Unfortunately, Tezcatlipoca was incapable of being a complete sun due to his missing foot. Angered by this inadequacy, Quetzalcoatl “gave [Tezcatlipoca] a blow with a great stick, and threw him over into the water.”6 He then proceeded to turn himself into the second sun. After his fall from grace, Tezcatlipoca “metamorphosed into a tiger [jaguar]” and killed all of the men that had been created in the age of the first sun.7

Tezcatlipoca would soon get his revenge and bring Quetzalcoatl’s time as the sun to an end. While the two brothers were arguably even at this point, Tezcatlipoca was still not content. He tricked the king Topiltzin-Quetzalcoatl, a manifestation of Quetzalcoatl, into becoming heavily intoxicated on pulque (an alcoholic beverage made from agave). In his drunkenness, Topiltzin-Quetzalcoatl slept with his celibate priestess sister. When he awoke the next day and realized what he had done, the king exiled himself in shame.

Though Quetzalcoatl’s departure left Tezcatlipoca in charge of the modern age, the Aztecs prophesied Quetzalcoatl might one day return to regain his throne.

A key feature of the Aztec religion were annual festivals dedicated to each major deity. Tezcatlipoca’s festival occurred during the fifth month of the Aztec calendar: Toxcatl.

Every year, a young man—typically a prisoner of war—was chosen to represent Tezcatlipoca. This person, called the ixiptla, or impersonator, was a recurring element in Aztec religious celebrations.

The ixiptla was treated with great respect and trained to speak in a courtly style. He was also taught to play the flute, the sound of which was thought to be the voice of Tezcatlipoca.8 A month prior to the festival of Toxcatl, he would be wed to four young women impersonating the four goddess wives of Tezcatlipoca: Xochiquetzal, Xilonen, Atlatonan and Huixtocihuatl.

The festival would reach its climax with the man voluntarily walking up the steps of the tlacochcalco (literally “house of darts,” essentially a stepped pyramid that housed the Aztec’s armory) and breaking a ceramic flute at each step. Once he reached the summit, the sacrificial victim would have his heart removed with an obsidian blade; he may also have been flayed and decapitated.

Even in death, the body of the ixiptla was regarded as sacred, and his skull was stored in the tzompantli, (literally “skull banner”) a rack containing the skulls of all sacrificial victims. When next year’s Tezcatlipoca impersonator was selected, they were given the most recent ixiptla’s skin to wear as a cloak.9

In the manga Soul Eater, Tezca Tlipoca is a recurring character. Despite some superficial similarities to the Aztec deity—such as an affinity for mirrors—the character was ultimately very different from his inspiration.

The band Mastodon referenced Tezcatlipoca in their song ‘Jaguar God.’ The lines “Smoking mirrors black obsidian” and “Lord of the near and the nigh” were both direct references to Tezcatlipoca.