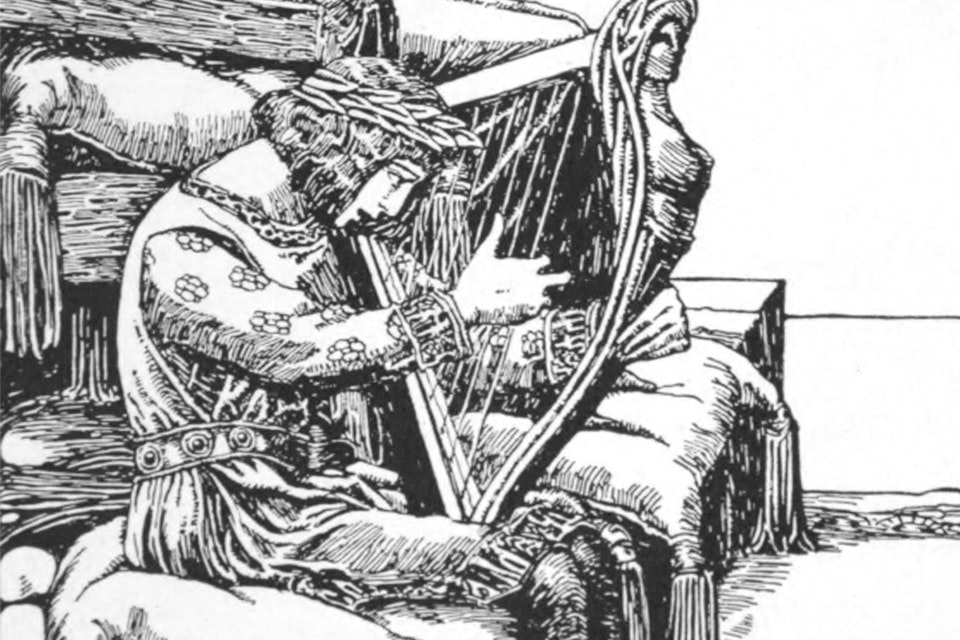 Known as the great Bard of the Britons, Taliesin was a poet, historian, and strategist of the British Isles. Famed for his beauty, as well as his powers of poetry and prophecy, Taliesin served in the courts of several Briton kings, including the legendary King Arthur.

While largely a product of myth-making, a real Taliesin lived during the sixth century.

Taliesin was a name of Welsh origin meaning “radiant brow.” Such a name thus reinforced the bard’s legendary beauty and mental acuity. In addition to his given name Taliesin was given many titles over the years to describe his influence and renown in Welsh literature. One such title, Taliesin Ben Beirdd, or “Taliesin, Chief of the Bards,” highlighted his importance among pre-Saxon bards and poets.

Taliesin was primarily a historical figure about whom legendary stories have been told, thus obscuring reality with myth and magic. A poet and bard of great renown, his wit and inspiration came from his spectacular rebirth at the hands of the white witch Ceridwen. Affected with the power of Awan, Taliesin was supernaturally beautiful and able to give accurate prophecy from a young age.

Taliesin was highly sought after by the Roman, Briton, and Saxon courts for his powers of poetry and prophecy. He advised three British kings, and served King Arthur in a similar capacity to Merlin. The similarities between Taliesin and Merlin have led to some confusion, with many later stories bestowed the former with the magical powers of the latter. While the two had become distinctive characters by the dawn of 12th century, certain authors continued to view them as interchangeable.

Some legends portrayed Taliesin as a hero in his own right, while others portrayed him as a key companion to the hero, rather than a mere advisor. Several of these legends involved King Arthur, though other mythic kings, such as Bran the Blessed, were featured as well.

Several locations in Wales have been attributed to or named for Taleisin, mainly in the area surrounding the village of Tre-Taliesin. A nearby grave called Bedd Taliesin has been attributed to the bard, but modern examinations have revealed the grave to be a Bronze Age burial site, making this an impossibility.

Ceridwen gave birth to Taliesin through magical means, and as such was considered to be the bard’s mother. His first patron, Elfin, lord of Ceredigion, served as his foster-father thereafter.

His son was Afaon fab Taliesin, a member of King Arthur’s court.

Taliesin’s life was a mixture of myth, fact, and contradiction. There were many tales surrounding the bard, and each of them shed light on a different aspect of his character.

The Tale of Taliesin revealed Taliesin’s mythical origin. Taliesin was originally a servant named Gwion Bach ap Gwreang who was meant to guard a special potion crafted by the white witch Ceridwen. The first three drops of the potion would make one beautiful, wise, and witty; the rest was a deadly poison. After the potion’s completion, an accident caused the three drops to land on this thumb and burn him. Gwion placed the thumb in his mouth and gained the gift of Awan, or poetic inspiration. Realizing that the three drops were now gone, Ceridwen gave chase to the fearful servant.

Now able to perform magic, Gwion transformed himself into various animals as he tried to outrun the white witch. In a last ditch effort to outsmart the witch, he transformed himself into a piece of grain, which Ceridwen promptly devoured. The witch soon found herself pregnant, and when the time came she brought Gwion into the world for a second time. Moved by his beauty, she decided to seek no further vengeance and fostered the boy with Elfin, the future lord of Ceredigion.

His foster-father named him Taliesin and raised him in his court. When he was older, Taliesin visited the court of Maelgwn Gwynned, a High King of the Britons and rival of his foster-father Elfin. During this visit, Taliesin predicted that Maelgwn would not die in battle, but would instead succumb to Yellow Fever in short order. His prediction proved correct, and Taliesin’s fame soon spread across the land.

#In the Service of Kings

I Taliesin, chief of bards,
With a sapient Druid’s words,
Will set kind Elphin free
From haughty tyrant’s bonds.
-“Taliesin”, from The Mabinogion

In addition to Elfin, Taliesin began to act as an advisor to different kings. He appeared in the tale Culhwch and Olwen as a bard in the court of King Arthur. In later Arthurian legends, Taliesin would appear as an advisor, magician, poet, or companion (one story featured his son joining the court as well). Taliesin took on a similar role in the tales of Bran the Blessed, traveling alongside the king and dispensing valuable advice.

The historic Taliesin lived sometime in the latter half of the 6th century, as evidenced by sources such as Historia Brittonum and Y Gododdin. Many famous poems and ballads have been attributed to him. By the time Llyfr Taliesin (the Book of Taliesin) was written in the 14th century, Taliesin was already a legendary figure who had appeared in Arthurian legends (by the 11th century) and other stories.

It is difficult to know which parts of Taliesin’s life were real, and which were fiction. Early sources revealed little about Taliesin beyond his skills, and songs and stories attributed to him cannot be trusted. Such songs and tales were likely amalgamations combined into a single written source by later Christian writers. Supernatural elements in stories of Taliesin’s life do not automatically disqualify them from being true, though they do imply exaggeration and ahistoricism.

Further complicating the issue was Iolo Morganwg, an the 18th century Welsh antiquarian. Morganwg collected original manuscripts of the tales of Taliesin and other historical figures. By their very nature, these texts often provided surprising details about their subjects. As the 19th century drew to a close, however, many of Morganwg’s original manuscripts were proven to be complete forgeries. The damage had been done, however, and Taliesin’s image was tarnished in the eyes of many.

Taliesin was often compared to Merlin, the famous magician of King Arthur’s court. Both men were wise and far-seeing, serving Arthur as advisor and magician, respectively. Though some legends depicted the two as practically interchangeable, they were ultimately separate characters with unique personal histories. Whereas Merlin was a druid and sometimes half-demon, Taliesin was merely a twice-born bard. Whereas Merlin was famous for his fantastical nature—appearing in French romances and other tales of popular legend—Taliesin was more grounded in historical reality.

Taliesin bore several similarities to the Irish/pan-Celtic figure Lugh of the Long-Arm. Lugh was a god of skill and competency who served as a bard in the court of King Nuada of the Silver Hand. Lugh was a much older figure than Taliesin, and may have influenced some of the Welsh bard’s more mythical features.

Taliesin has appeared prominently across a number of popular mediums/works: