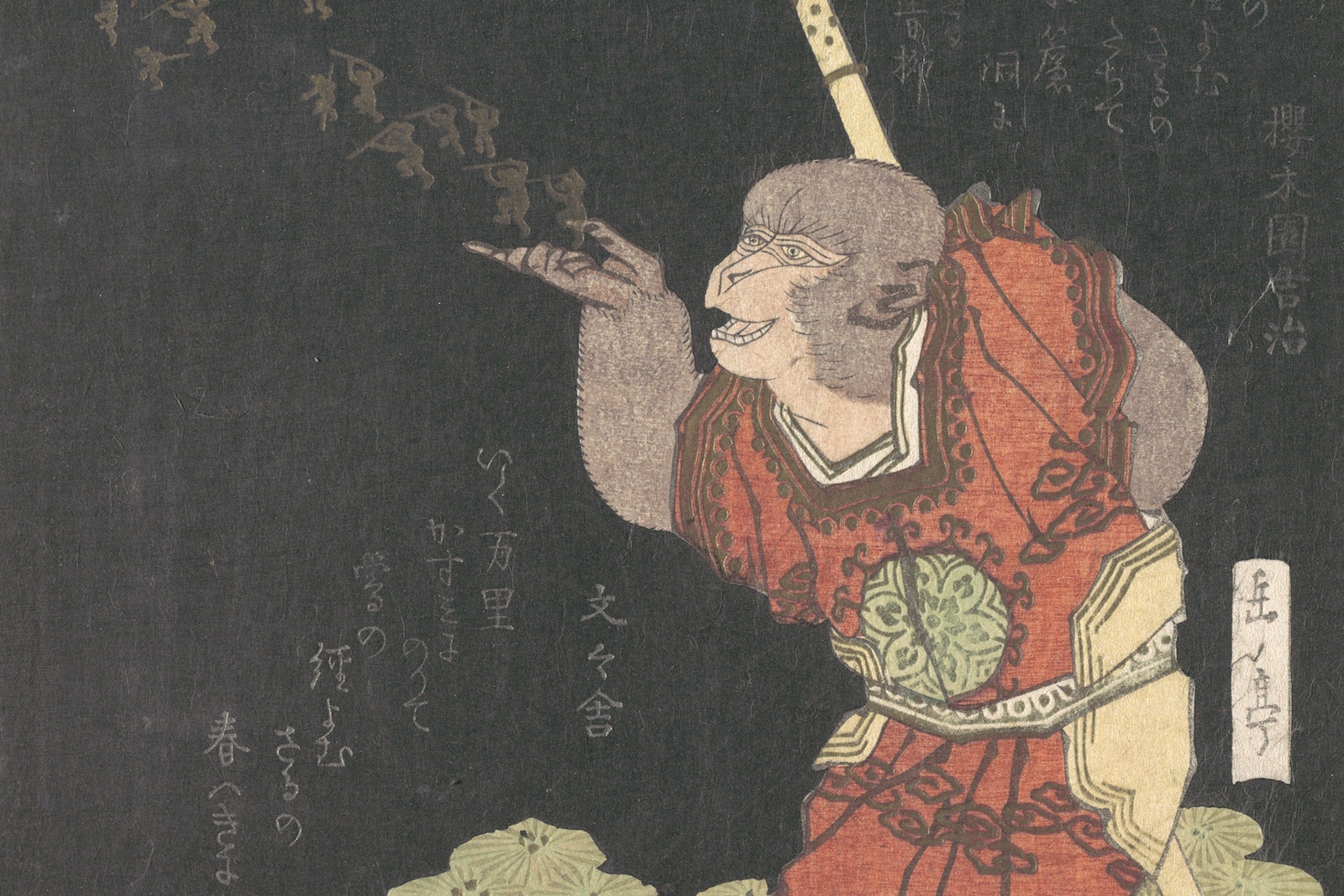 In Chinese mythology, Sun Wukong (孫悟空), also known as the Monkey King, is a trickster god who plays a central role in Wu Cheng’en’s adventure novel Journey to the West.

Wukong is blessed with unmatched superhuman strength and the ability to transform into 72 different animals and objects. Each of his hairs have transformative powers, and he can magically manipulate wind, water and fire as well. Characterized by his short temper, impatience and proclivity towards anger, Sun Wukong is one of the most important and beloved literary figures in Chinese culture.

Sūn Wùkōng’s name is comprised of the characters for “grandson” (孫), “awakened” (悟) and “space”(空). Though the character sūn (孫) usually refers to grandsons, in this context it refers to monkeys. His name literally translates as the “monkey awakened by the emptiness.” Wukong’s name is meant to represent his spiritual journey from an ignorant, short-tempered monkey to a benevolent, enlightened being. In Japan, he is known as Son Goku.

Being a monkey, Sun Wukong has a very distinct appearance that sets him apart from the other gods. Prior to his enlightenment, Wukong is usually depicted as a naked macaque. After devoting himself to the Buddhist monk Tang Sanzang, Wukong is generally shown in full warrior gear with special items such as a golden chainmail shirt, a phoenix feathered cap, cloud-walking boots, and an eight ton staff that can shrink to the size of a needle.

Sun Wukong does not have any blood relatives, as he was born from a magical rock. Prior to joining the Jade Emperor’s court, he lorded over a group of wandering monkeys who took care of him and regarded him as their leader.

The legend of Sun Wukong first appeared in the Song Dynasty-era adventure novel Journey to the West. The book follows the story of a humble Buddhist monk named Tang Sanzang who travels from his home in Southern China to India in order to bring back holy texts and enlighten his countrymen. After being released from the mountain he was trapped under for 500 years, Wukong serves as the monk's bodyguard throughout his journey.

In ancient times, a magical rock rested on top of Mount Huagou. One day, a stiff breeze blew upon the rock and caused a fully formed monkey to burst forth from its stone face. Despite having just been born, the young monkey was already able to walk and speak.

When Wukong opened his eyes, golden beams of light shot forth from his pupils, piercing the clouds and startling the Jade Emperor (玉皇). When the Jade Emperor looked for the source of the strange light, all he could see was a baby monkey. Thinking that the light could not possibly emanate from such a source, the Jade Emperor dismissed the incident from his mind.

As he began exploring the forest, Sun Wukong discovered other monkeys and decided to live with them. One day the group was relaxing near a waterfall when they decided to play a game: whoever was brave enough to jump through the falls and find the stream’s source would be named the King of Monkeys.

Sun Wukong immediately leapt through the waterfall and traveled up the stream to find its source. His mission was successful, and he quickly returned and declared himself king. With the support of the forest monkeys, Sun Wukong quickly established himself as a powerful forest demon that would go on to battle the Dragon King and other sea demons. His exploits earned him a number of powerful weapons, including his signature gold chainmail shirt, phoenix cap, cloud-walking boots, and magical eight ton staff.

When the time came for Yan Wang (閻王) and the Kings of Hell to collect Wukong’s soul, Wukong was ready. He tricked Yan Wang into allowing him to return to earth without undergoing reincarnation. Before leaving Hell, Wukong managed to erase his and every other forest monkey’s name from the Book of Life and Death. Troubled that the balance of life was being upset by a mere monkey, Yan Wang appealed to the Jade Emperor for assistance.

Sun Wukong and the Jade Emperor

Upon hearing about the irascible demon of Mount Huaguo, the Jade Emperor felt the best way to subdue Wukong was to let him live in Heaven with the other gods so that he would feel a sense of importance. He issued an invitation to Wukong, who eagerly accepted. After saying goodbye to his friends, the Monkey King set off for the Jade Palace.

Once he got there, however, Sun Wukong discovered he was assigned to the lowest task in all of Heaven: guarding the Jade Emperor’s horses. He quickly realized that because he was a monkey, the other gods would never see him as a peer. In hopes of finding a way to prove himself an equal, the Monkey King became obsessed with the idea of immortality and devoted himself to the pursuit of everlasting life. When the Jade Emperor encouraged him to take up other, more fruitful pursuits, Wukong scorned him:

‘Can this sort of practice lead to immortality?’ asked Wukong.
‘Impossible! Impossible!’ said the Patriarch.
‘I won't learn it then,’ Wukong said.

One day, the Jade Emperor held a party to celebrate his wife, Xiwangmu (西王母). Having been unknowingly excluded from the party, Wukong decided to drop by and was laughed out of the hall by the other gods. Hurt by the actions of his peers, Wukong declared himself to be Qítiān Dàshèng (齊天大聖), or the “Great Sage Equal to Heaven". He also made an enormous banner to taunt the Emperor.

The Jade Emperor sent a battalion of soldiers to arrest Wukong for his insolence, but they proved to be no match for him. After defeating the last solder, the Monkey King shouted victoriously, “Remember my name, Great Sage Equal to Heaven, Sun Wukong!”

Out of options, the Jade Emperor told Buddha what had happened and begged him to intervene. Buddha immediately banished Wukong from Heaven and pinned him underneath a mountain so that he could reflect on his actions.

Journey to the West

For 500 years, Wukong lay immobilized beneath the weight of Buddha’s mountain. Eventually, a traveling monk named Tang Sanzang found the Monkey King and offered to release him on the condition that he would repent and become the monk’s disciple.

At first the Monkey King rejected the monk's offer. Sun Wukong would play servant to no one—least of all a human. After Tang started to walk away, however, Wukong quickly changed his mind. He would gladly serve the monk in exchange for his release.

Before Tang freed Wukong, the goddess of mercy Guanyin (觀音) gave the monk a magical band that granted him control over the Monkey King. After being freed from the weight of the mountain, Sun Wukong joined Tang’s other demonic traveling companions: Zhū Bājiè (猪八戒) or “Piggy”, and Shā Wùjìng (沙悟浄) or “Sandy.”

Grateful to be released from his imprisonment, Sun Wukong served Tang faithfully during their journey to India and cheerfully battled demons whenever the need arose. Through his noble deeds and dedication to Tang’s teachings, Sun Wukong eventually achieved enlightenment and put an end to his angry, greedy and envious tendencies.

Though he’s not commonly worshiped by Buddhist and Taoist practitioners, Sun Wukong is an important Chinese cultural figure and has been featured in a number of TV series, movies and plays.

Journey to the West has been adapted into film a number of times, and was most recently remade in 2013 by Chinese film director and actor Stephen Chow. In the anime Dragon Ball, the character of Son Goku is largely based off the myth of Sun Wukong, hence his superhuman strength and tail. Sun Wukong also serves as the inspiration for the character of the same name in RWBY.

Sun Wukong is featured as a character in the video games Sonson, Marvel vs. Capcom 2: New Age of Heroes, League of Legends, and Warriors Orochi.