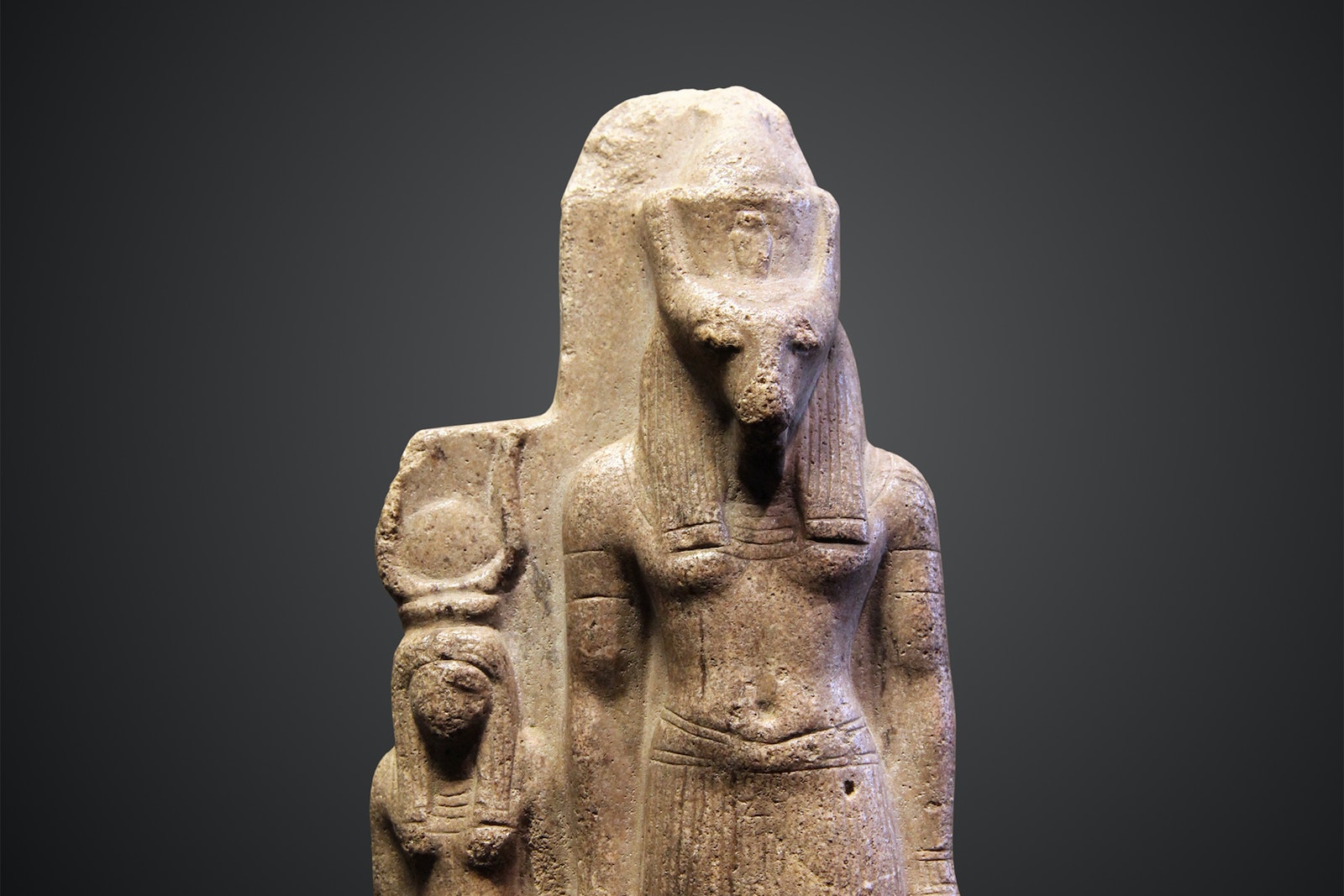 A wily trickster, Set was the Egyptian god of confusion and disorder. Though he generally played an antagonistic role in Egyptian mythology, Set still played a key role in the Egyptian cosmos. He would ultimately ally himself with Osiris, riding on the front of the solar barque and defending it from Apophis—an elemental chaos beast.

As with many Egyptian deities, there is considerable uncertainty regarding the meaning of Set’s name. Set’s name may have meant something to the effect of “he who is below,” on the basis that Set was Horus’s opposite. Note that Horus’s name likely meant “he who is above.”1

Set was an easy god to recognize in hieroglyphics, as he always appeared as an unidentifiable aardvark/ant-eater headed man. While most Egyptian deities were associated with a specific animal, it has been suggested that Set’s form did not represent an animal at all; rather, he may have represented a mythical, chimeric beast.2

Like many Egyptian gods, Set was capable of shapeshifting. He could turn himself into an ox, an oryx, a hippopotamus, a bull, a crocodile, and a panther. He could also take the form of Anubis.3

As a trickster god, Set opposed the Egyptian concept of maat, or divine order. Set was not simply a force of disorder, but instead served as the god of khenenu, or confusion.4 He was often associated with sandstorms, thunderstorms, and flash floods; given Egypt’s reliance on the Nile’s waters, all of these forces were regarded as destructive nuisances.5

Regarded as the mightiest of the gods, Set proved his strength in the nightly battles against Apophis, the chaos monster.6

Set was born to the earth and sky gods Geb and Nut. His siblings included Osiris, Horus (Note: not in all mythological versions), Isis, and Nephthys. His grandfather was the sun god Ra .

Set took his sister, Nephthys, as his wife. Having formed a connection in the womb, the two were married before they were born.

A key element of Set’s mythology was his unrelenting jealousy of his elder brother Osiris. Some of this jealousy may have been warranted—his wife eventually bore an illegitimate child with Osiris.

While Set was a tremendously important god in the Egyptian pantheon, his mythology was largely Osiris-centric. Though few independent myths have been found, evidence suggests that Set existed prior to his incorporation into the Egyptian mythos, and it is all but certain that such myths existed as well.

Set was originally worshipped in Upper (Southern) Egypt as a god of the desert. Following the unification of Upper and Lower Egypt, Set’s worship was incorporated into the larger Egyptian mythos. While he retained his desert-centric characteristics, such traits did not fit neatly into the agrarian framework of Nile-bound Egyptian society. This incongruence may explain why he was cast as a force of evil and disorder.

Unlike his siblings, Set did not have a traditional birth. In some tellings, he tore himself from Nut’s womb; in others, his mother spat him into existence.7 In either case, his unconventional birth was thought to foreshadow his representation of disorder and chaos.

The Murder of Osiris

The most important extant myth from Ancient Egypt was the murder of Osiris. The tale, which included nearly every significant god and goddess, was unique in that it managed to capture a sense of the Egyptian value system.

[You can read the entire myth at The Murder of Osiris.]

Jealous of his brother Osiris’s success, Set plotted to depose him. Using an elaborate trap involving a finely crafted sarcophagus, he killed his older brother. For a time, it seemed that he had gotten away with his fratricide, as he went on to rule Egypt as its king. Set imprisoned Isis shortly after coming to power; he believed her to be a threat to his power.

A common theme in Set’s mythology was his violation of sexual norms and general sexual deviancy. One myth tells that he raped his sister Isis, impregnating her in the process. The baby, which was born prematurely, emerged as a hideous creature—half black ibis and half baboon.8

In another tale, Isis was attacking Set’s forces under the guise of the goddess Sekhmet. When Set spotted her, he immediately recognized the goddess for who she truly was. Both enraged and aroused, Set then transformed himself into a bull and pursued her. In response, Isis turned herself into a dog armed with a knife bladed tail. She managed to evade Set’s pursuit, causing her horribly aroused brother to ejaculate on the ground. Isis mocked him for his failure, saying “It is an abomination to have scattered [your seed], O Bull.”9

When Osiris’s son Horus came of age, he decided to challenge Set for what he regarded as his rightful throne. Depending on the myth, the two either engaged in battle to decide who will rule, or put the matter before a court presided over by Ra. Horus prevailed and was awarded the kingship.

[For a more complete retelling, see Isis and the Ascendency of Horus.]

This myth could be seen as establishing precedent for primogeniture—the practice through which the first-born son inherited his father’s throne. Without a clearly defined practice of succession, it was challenging to maintain the continuity of civilization. While Egypt had its fair share of dynastic conflict, on the whole succession followed the paradigm laid out in the Osirian myth.10 Even outside the realm of political succession, primogeniture (or variations of it) were the de facto practice for inheritances.

A recurring element in Set’s myths was his single-minded determination to destroy Osiris’s body. No matter how many times he failed, he would not stop until he completed his mission.

Despite his great strength, Set met his match when he attempted to steal Osiris’s body out from under the watchful eye of Anubis. While Set was able to briefly steal Osiris’s corpse a few times, he was caught and punished severely each time.

[The full version of this myth is recounted in Anubi’s Battles with Set.]

Anubis eventually tired of Set’s mischief and killed the evil god, flaying his skin and setting fire to his corpse. Wearing Set’s skin as a disguise, Anubis snuck into Set’s military camp and killed all of his followers.11

Constrasting with the evil and destruction he had wrought in life, Set was a force for good in the afterlife. He rode at the front of Ra’s solar barque and defended the sun god from Apophis, the great chaos monster.12

Commonly portrayed as a giant snake or crocodile, Apophis would attack Ra each night. Though Apophis could be killed, he would regenerate each day, thus ensuring the need for constant vigilance. Some myths explained thunder to be the sound of an epic clash between Set and Apophis.13

In a tale mirroring Isis’s poisoning of Ra, Set was bitten by a unspecified creature while aboard Ra’s solar barque. The bite caused him great suffering, and Horus—having set aside his differences with his uncle—offered to heal him. In order to do so, however, he would need his uncle’s secret name.

Set was reluctant to provide his secret name to Horus, for names held great power. Like his grandfather Ra before him, Set prevaricated:

Unsatisfied with this response, Horus insisted that Set was none of these things and that he could only heal him with his true name. Set tried again, offering that he was “a Quiver full of Arrows and a Pot Full of Disturbance.”

Once again, Horus told him that this response was inadequate.

Still not ready to reveal the truth, Set told Horus: “I am a man of a thousand cubits, whose reputation is not known, I am a threshing-floor, made fast like a bronze which a cow has not swept. I am a Jug of Milk, milked from the breast of Bastet.”

This answer was still not enough for Horus. Left with no other recourse, Set finally offered his true name:

I am a man of a million cubits, whose name is Evil Day. As for the day of giving birth or of conceiving, there is no giving birth, and trees bear no fruit.

Having revealed his uncle’s secret name at last, Horus was able to heal Set’s injury.14

Set was mentioned in Neil Gaiman’s American Gods. In the book, Ibis (Thoth by another name) mentioned that the last time any of the gods had heard from Set was 1905 or 1906 via a postcard from San Francisco.15

Set served as the inspiration for Sutekh, an antagonist in Pyramids of Mars, the 3rd serial of the 13th series of Doctor Who. The serial relied on the oft-repeated trope of Egyptian gods being aliens—in this case a race called Osirians.16

Gerard Butler plays Set in the 2016 film Gods of Egypt. While the film took several plot elements from the myth of Osiris’s death, it also took considerable artistic license.17

Due, perhaps, to his status as a mythological antagonist, Set has often been invoked in death and black metal: