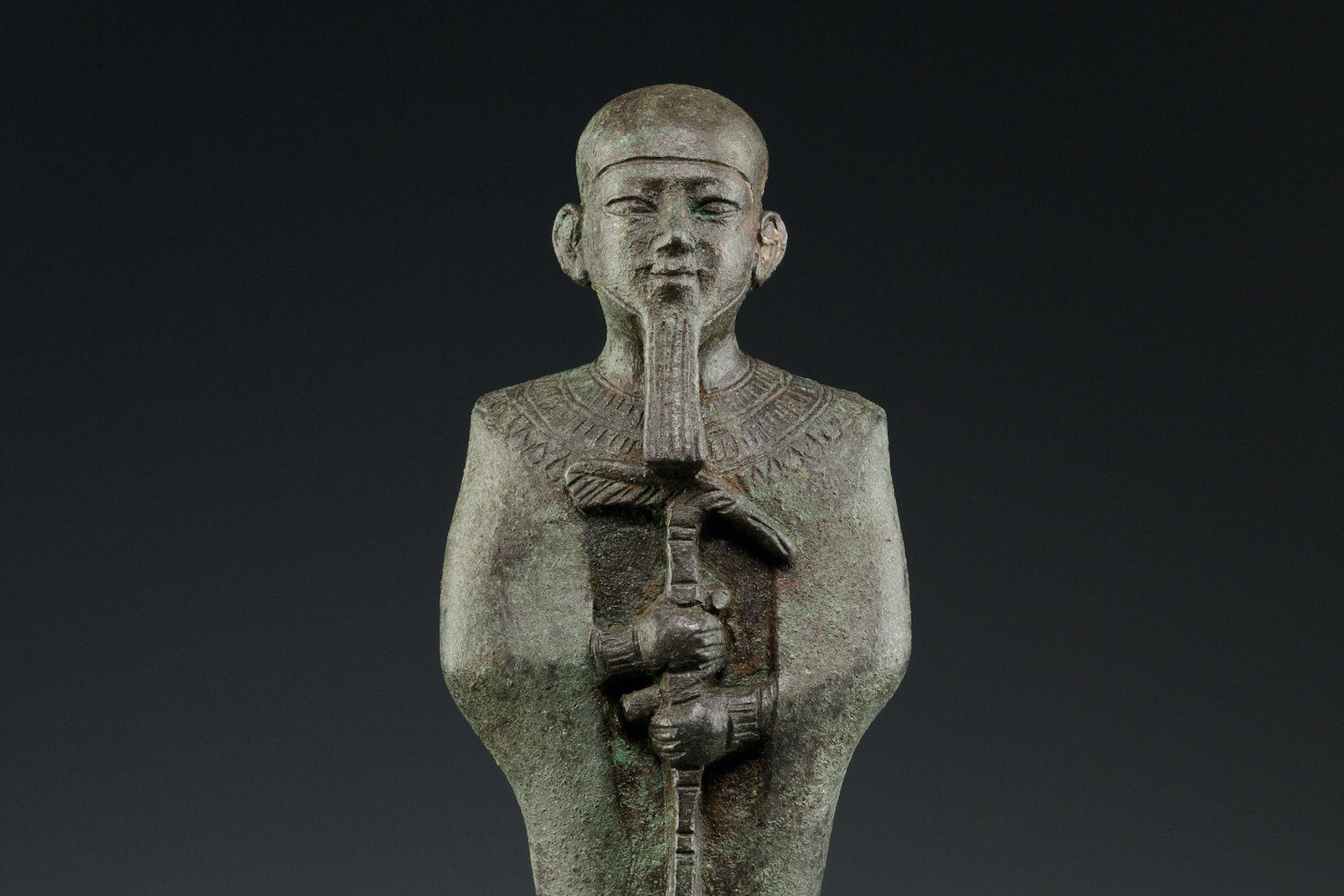 The ancient Egyptian god of craftsmen and the arts, Ptah spoke the words that inspired the creation of the universe. Part of the Memphite Triad, Ptah was the husband of Sekhmet and the father of Nefertum.

Though the precise origins of Ptah’s name remain unclear, several clues can be gleaned from surviving knowledge. The high priest of Ptah’s cult was referred to as wer-kherep-hemu, or "Great Leader of the Craftsmen." This title suggests that Ptah’s name may have been connected to the Egyptian root-word meaning “to sculpt.”1

As the divine sculptor, Ptah was regarded as the god of arts, crafts, and the creative mind.6 Ptah also served as the patron of sculptors and metalworkers.

Ptah’s relationship with craftsman also solidified his association with dwarfs.7 Ptah-Paitakos was a form of Ptah depicted as an achondroplastic dwarf. This link between dwarfism and metalsmithing (jewelry production, in particular) was likely a result of chronic exposure to heavy metals, such as arsenic and lead. The Greek smith-god Hephaestus was similarly crippled, and was at least in-part an adaptation of Ptah.

Ptah was usually depicted as a blue-skinned, bearded man sporting a skull cap and a scepter.8 In a mythos where most gods’ beards were curved, Ptah’s staight beard was a departure from the norm.9

Ptah’s consort/wife was Sekhmet, the lion-headed warrior goddess. The two gods had a son, Nefertum.10

During the New Kingdom (1549-1069BCE) Ptah and Sekhmet were revered as the parents of Imhotep. An advisor to King Djoser during the 3rd Dynasty (c. 2686BCE) Imhotep was so revered that he eventually passed into myth. By the Late Period (664-332BCE) Imhotep had become fully deified and was worshipped as a full-fledged god in his own right.11

Ptah’s cult of worship began in the Egyptian capital city of Memphis. Though he was worshipped from the 1st Dynasty (c. 3050BCE) onward, Ptah initially had limited importance outside the capital.12

Memphis’s political centrality allowed Ptah to rise within the Egyptian pantheon.13 Ptah’s importance eventually became such that Memphis became known as Hikaptah or “House of the ka [spirit] of Ptah.” A temple dedicated to Ptah stood within the center of the city.14

Memphis’ political might generated Memphite theology, and Ptah’s mythology served as a retroactive explanation for Memphis’s rise to power.15

While Ptah’s true origins remain unknown, some accounts have suggested that he inititially appeared as a sun god. Alternative sources indicate he may have been a moon god, while others suggest he was a sun and moon god. Several scholars have suggested that Ptah had a different origin entirely. According to this theory, Ptah was a version of the Apis bull, which had long been worshipped in Memphis.16

#Ptah the Spirit of Creation

As a result of the heterogeneity of the Egyptian pantheon, there are numerous creator gods and goddesses. In addition to inspiring the creation of the cosmos, Ptah was said to have fashioned gods, men, food, justice, labor, and “all good things.”18

Ptah created gods from precious metals and gemstones, and sculpted humans from mud and clay.19

#Ptah’s Role in the Land of the Dead

While Ptah himself was not a god of the dead, he was often associated with Osiris and Sokaris—deities with close connections to the deceased. Ptah’s connections to the afterlife can be seen in his typical garments, which resembled the wrappings of a mummy.

Though Ptah’s role in the underworld was rather specific, it was undeniably important. Ptah was responsible for using his iron knife to open the mouths of the recently deceased. This action allowed the dead to reclaim their senses and experience the afterlife in full.20