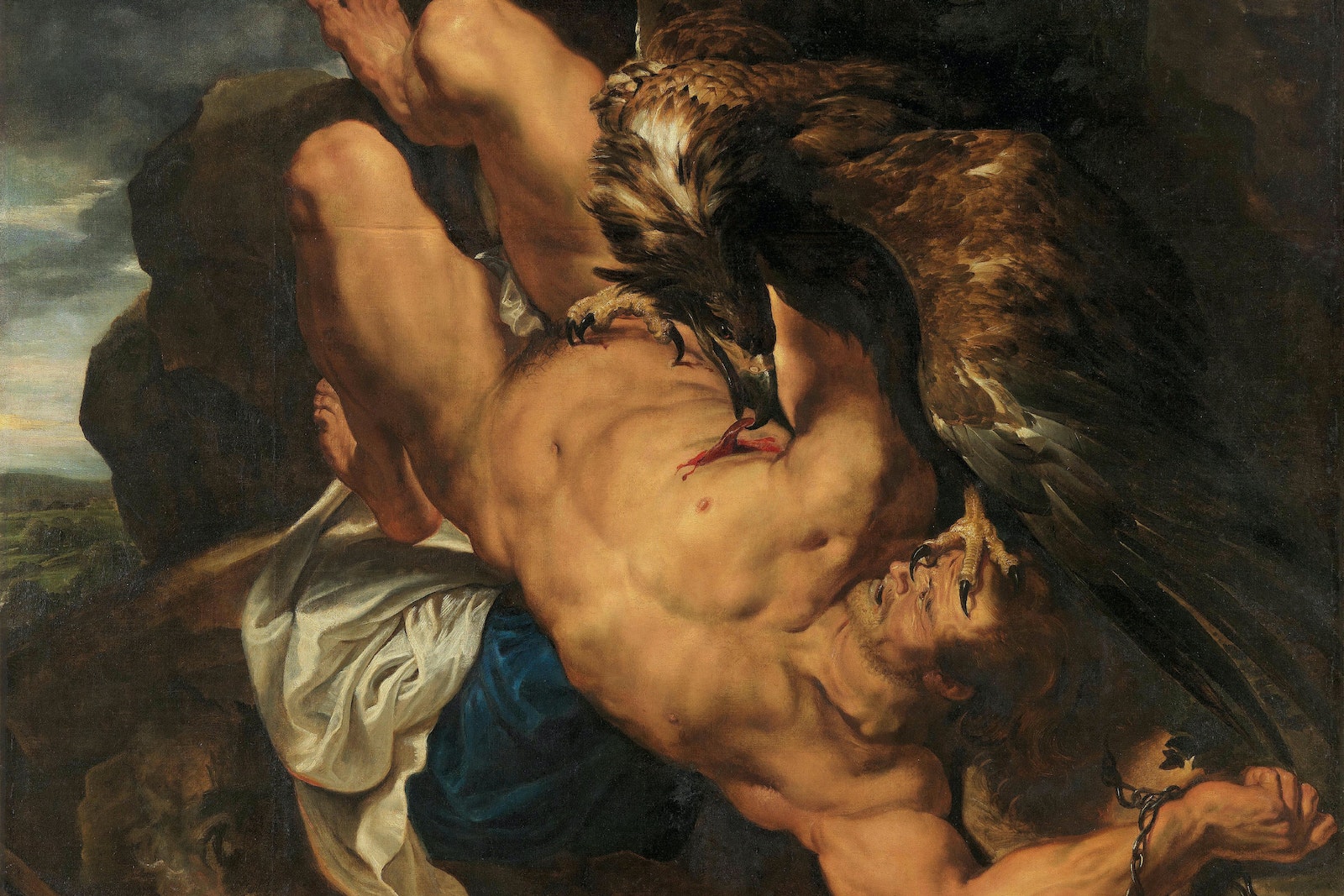 The Titan Prometheus was a trickster who helped to fashion the first mortals and gave them fire in defiance of the mighty Zeus. For this crime, he was fastened to a rock, where an eagle would come to eat his liver each day for all eternity. Prometheus was also the father of the mortal Deucalion, a mythic hero who helped to repopulate the world after a great flood nearly destroyed mankind.

For the Greeks and many who followed, Prometheus was revered as a champion of humanity, as well as a bringer of wisdom, reason, and knowledge. In Athens, the center of his ritual observance, Prometheus was credited not only as the bringer of fire, but of metallurgy as well. Alongside Athena and Hephaestus, Prometheus was celebrated by the city as a wellspring of technology, craft, and the civilized arts.

The name “Prometheus” stemmed from the Greek prefix pro-, meaning “before,” and the verb mathein, meaning “to learn” (itself derived from the Proto-Indo-European root men-, for “to think”). Prometheus’s name, often translated as “thinking before” or “learning before,” has generally been taken to mean “forethinker”—one who knew or thought about something before others. This name could be indicative of Prometheus’s role in bringing fire and metallurgy to humanity.

While Prometheus was not a particularly strong individual, he nevertheless possessed a shrewd intelligence. During the Titanomachy, which pitted the Titans against the Olympian deities, Prometheus betrayed his brethren and sided with Zeus. In one version of the Greek creation myth, Prometheus molded the first humans from clay and, against Zeus’s orders, granted them the gifts of fire and metallurgy. When Zeus discovered this treachery, he subjected the Titan to eternal torment; the macabre nature of his imprisonment resulted from the magnitude of his treachery.

Prometheus was the son of the Titans Iapetus and Clymene, of Oceanid lineage. His brothers included Epimetheus, Menoetius, and Atlas, who held the world aloft on his mighty shoulders. Prometheus had a mortal son, Deucalion, whom he sired with either Clymene, Hesione, or Pronoia, depending on the source. Deucalion would go on to repopulate the earth after a great flood wiped out most of humanity.

As with most Titans, little is known about Prometheus’s origins. The Greeks worshipped the Olympian gods and goddesses above all else, and tended to view the Titans as a distant and largely irrelevant group. What is known of Prometheus’s origins comes from a hodgepodge of Greek sources, including Hesiod, Plato, Aeschylus, and Ovid. The diversity of these sources, spread across a number of eras and regions, has led Prometheus’s mythology to appear somewhat inconsistent at times.

In the earliest sources, Prometheus was a lesser Titan known for his wit and wile. In the Theogony, Hesiod described him as “full of various wiles” and “ready-witted.”2 According to Aeschylus’s Prometheus Bound (the first and only surviving play of a three-part tragedy involving Prometheus), Prometheus switched sides during the Titanomachy, committing an act of treachery that ultimately sealed Zeus’s victory. In the aftermath of the conflict, Prometheus became a member of Zeus’s inner circle.

#Prometheus and the Creation Epics

A number of sources have credited Prometheus with crafting the first humans. In the Metamorphoses, Ovid claimed that Prometheus, working at the behest of Zeus, molded the first human from clay:

A creature of a more exalted kind. Was wanting yet, and then was Man design’d:
Conscious of thought, of more capacious breast,
For empire form’d, and fit to rule the rest:
Whether with particles of heav’nly fire. The God of Nature did his soul inspire,
Or Earth, but new divided from the sky,
And, pliant, still retain’d th’ aetherial energy:
Which wise Prometheus temper’d into paste,
And, mixt with living streams, the godlike image cast.3

Zeus, however, soon became dissatisfied with the new creation. One of the earliest and best known versions explained Zeus’ anger as being the result of a trick Prometheus played on the king of gods. The gods had gathered for a banquet at Mecone to forge their relationship with humankind when Prometheus presented Zeus with two sacrificial offerings. One was an ox’s stomach, disgusting on the outside but filled with choice cuts of beef. The other, a slab of white fat, was enticing on the outside but filled with ox bones. Zeus chose the latter option, and in doing so doomed the gods. Henceforth, humans would only offer bones to their deities.

Zeus raged at Prometheus and the human race for whom he had worked such deception: “Son of Iapetus, clever above all! So, sir, you have not yet forgotten your cunning arts!”4 In his anger, Zeus took fire away from humanity. Prometheus was as clever as Zeus had observed, however. When the opportunity presented itself, he snuck into Hephaestus’s workshop and retrieved the fire, then hid it in a hollowed-out fennel stalk and returned it to humankind. In some versions of the myth, Prometheus was the first to bring fire to humanity. In these tellings, Prometheus stole fire for humanity out of pity, rather than to correct Zeus’s unjust act.

Once again, Zeus responded with punishments directed not only at Prometheus, but all humanity. With Hephaestus and Athena, Zeus crafted a lovely young maiden named Pandora. Dressed in fine clothes and bedecked with jewels, Pandora was taught to be charming and coy. Carrying a jar (or pithos) that Hermes had filled with all the evils of the world (war, famine, death, and disease), Pandora was then sent to dwell among humanity. Though she was told never to open the jar, her curiosity soon got the better of her. Pandora’s act unleashed a host of evils on the world of men, forever spoiling the peaceful existence they once knew:

But the rest, countless plagues, wander amongst men; for earth is full of evils and the sea is full. Of themselves diseases come upon men continually by day and by night, bringing mischief to mortals silently; for wise Zeus took away speech from them. So is there no way to escape the will of Zeus.5

Prometheus himself was then chained to a rock (often said to be located in the Caucasus Mountains), and devoured by an eagle (a symbol of Zeus), which ate his regenerating liver every day. Some tales have claimed that Prometheus was eventually delivered from torment by the mortal hero Heracles, who slayed the eagle and released the Titan from his bonds.

#Prometheus and the Greeks

Despite his prominent role in their mythology, Prometheus was seldom worshipped by the ancient Greeks. His cult was limited to Athens, where, alongside Hephaestus and Athena, he served as part of an unofficial triumvirate of deities associated with technology and culture. Artisans, in particular, paid homage to Prometheus, who gave them the gifts of fire and metallurgy.

The Athenians erected an altar to Prometheus in the grove outside the Academy, a key learning center founded by Plato in the fourth century BCE. This altar served as the starting point for a torch race held during the Panathenaic festival, an Athenian civic festival held every four years.

One of the most popular individuals from Greek mythology, Prometheus still thrives as an icon in popular culture. Unlike other ancient figures, Prometheus has enjoyed a continuous presence in the popular imagination, from the Classical Era to the present day.

Prometheus was a central figure in the Romantic movement in art and literature, which celebrated the unrestrained and mysterious powers of nature and man. In Johann Wolfgang von Goethe’s 1789 poem “Prometheus,” the Titan raged against Zeus for crafting a fallen world.

In Frankenstein; or, the Modern Prometheus (1818), author Mary Shelley channeled themes implicit in Prometheus’s theft of fire—namely, the dangers of pursuing knowledge beyond our reach. Ridley Scott’s 2012 film Prometheus examined similar subjects. In this Alien prequel, the search for humanity’s origins lead scientists to a distant planet, where they discovered the vestiges of an alien race called the “Engineers,” who not only created life on earth, but also tried to destroy it by unleashing deadly xenomorphs.

Prometheus was also used as a literary subject by Percy Bysshe Shelley, Franz Kafka, and Ayn Rand, among others. Joseph Campbell used Prometheus in his analysis of hero archetypes, comparing Prometheus’s suffering with that of Jesus; both figures suffered for humanity.

Prometheus has appeared in other mediums as well, such as the television show Hercules: the Animated Series, and the video game God of War II. In the latter, player avatar Kratos freed Prometheus from his confinement and earned the “Power of the Titans.”

Prometheus has a scientific legacy as well—the rare element promethium (atomic number 61) was named after him.