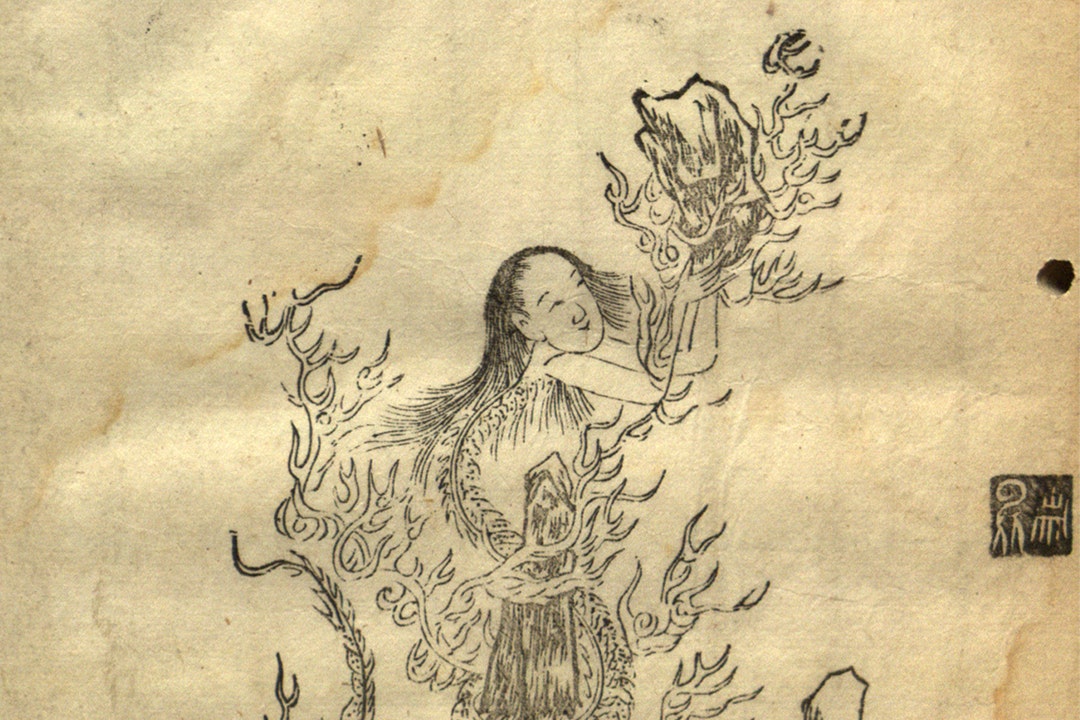 In Chinese mythology, Nüwa (女媧) is considered to be the first being with the ability to procreate and is the creator of all mankind. Ancient Chinese society was fiercely matriarchal, so Nüwa, being the mother of all humans, was considered a very important deity. She has a hand in a number of stories but is most commonly associated with China’s creation myth and for saving humanity by mending a hole in the sky after a great flood. Today, Nüwa is still a popular deity and is usually prayed to by women who need divine assistance with marital affairs or fertility issues.

In art, she’s usually depicted as a supernatural creature with a human face and a long serpentine body but is also sometimes simply drawn as a woman dressed in traditional Chinese hanfu.

Nüwa’s name, 女媧, is made up of the Chinese character for woman, nǚ (女), and a character that is completely unique to her name, wā (媧). In other styles of romanization, her name is sometimes written as Nü Gua or Nü Kua. Nüwa is also sometimes referred to respectfully as wā huáng (媧皇) which translates literally as “Empress Huang.”

Nüwa’s mother is the goddess Huaxu (华胥) who became suddenly pregnant when she was wandering the universe and stepped in a footprint left by the god of thunder, Leigong (雷公). Nüwa is married to her brother Fuxi (伏羲). In some versions of the creation myth, Fuxi is credited with creating mankind with Nüwa through their union. He’s seen as the inventor of hunting, cooking, and the Chinese writing system.

There are two widely told versions of China’s creation story. The most commonly told one is where Nüwa crafts humanity from river clay.

#The People of Clay

After Pangu (盤古) emerged from his mythical egg and created the physical universe, the earth separated from the heavens and became a beautiful place full of lush, green vegetation, vast rivers, tall mountains, and all sorts of animals.

One day, Nüwa decided to go for a walk in the woods among the mountains and animals. As she walked along, she was suddenly overcome with loneliness. Even though everything around her was strikingly beautiful, Nüwa had no one to keep her company. She decided to pause along the banks of a river and began to make figures out of clay from the mud.

At first she began to make easy shapes like chickens and sheep, and though they amused her, she soon became bored with them. Gazing into the river and seeing her reflection, she was struck with inspiration. Why not make clay figures that looked like her?

She began to shape the mud into figures with faces, arms, hands, and legs. To her delight, they began to dance and talk with her when she put them on the ground. She decided to name them humans (人).

Nüwa was so excited by her creation that she made clay figures until her hands hurt. She took the end of a rope, dipped it in the mud, and began to swing it around her head forming blobs of sticky mud around her. It is said that highborn, noble people are descendants of those that Nüwa created by hand, while working class people were formed from the rope.

In an alternative creation myth, a cataclysmic flood wiped out all of mankind except for Nüwa and her brother, Fuxi, who happened to escape into a boat at just the right moment. After the floodwaters died down, they discovered that they were the last humans left on Earth.

Although they realized that they should procreate to continue the survival of the human race, they were deeply conflicted about the idea since they were siblings. Fuxi and Nüwa, decided to ask for heaven’s guidance. After praying, they came to the conclusion that they needed to undergo a divination test that could indicate whether they were destined to be husband and wife.

Fuxi and Nüwa ascended two different mountains and lit two fires. They decided that if the smoke blew straight up that they would not get married. But, if the smoke trails intertwined with one another, it was a sign that they should continue the human race. The smoke from their fires twisted and curled in with one another so Fuxi and Nüwa became husband and wife and repopulated the earth.

#Mending the Pillars of Heaven

The world of the first beings was very different from ours now. The earth was just in its infancy and was only separated from the sky by four very large pillars.

One day, Gonggong (龔工), the god of water, and the god of fire, Zhurong (祝融) became locked in a massive battle that would determine the ruler of heaven. Wildfires raged and floods plagued the countryside. Gonggong, who was motivated by evil, ultimately lost the fight. Gonggong was so angered that he bashed his head against Buzhou mountain—one of the four pillars holding up the heavens. The earth began to tremble and the pillar collapsed and ripped a hole in the sky.

At this point, the earth was completely in tatters from Zhurong and Gonggong’s epic battle. Fires had scorched the earth, water was pouring incessantly from the hole in the sky, and the heavens no covered longer the earth. Seeing how her children were suffering, Nüwa immediately sprang to action. She went to the sky turtle, Ao, and begged him to grant her a miracle to save her children. The turtle obliged and used a sword she had given him to cut off his own four legs.

Nüwa then gathered five colored stones and melted them together to fix the hole in the sky. She used Ao’s legs to replace the four broken pillars all the while holding up the sky with her back while rain poured down upon her. The ancient Chinese historian Sima Qian (司馬遷), recorded the following account of Nüwa’s heroic deed:

The pillars of Heaven were broken and the corners of the earth gave way. Hereupon Nü Kua melted stones of the five colours to repair the heavens, and cut off the feet of the tortoise to set upright the four extremities of the earth. Gathering the ashes of reeds she stopped the flooding waters, and thus rescued the land.

One version of the story says that after she was done, she was so tired that she laid to down to rest and died from exhaustion. Another version says that while she was working, she discovered there wasn’t enough stone to fix the sky, so she sacrificed herself to use her body to fill the last bits. Either way, order was restored to earth and humanity was able to live peacefully once again.

Although she did her best, Nüwa couldn’t get the sky and earth to align exactly the way it had before. The earth became permanently tilted and that’s why it’s said that all of the rivers in China run in a Southeastern direction.

Although China’s opinion on traditional religious beliefs went through massive changes during the Cultural Revolution, Nüwa is still an important figure in popular culture and is contemporarily regarded as something of a historical figure. Though many temples dedicated to Nüwa and her brother Fuxi can be found throughout the Chinese-speaking world, her most important temple is located in Hebei Province and is seen as the ancestral shrine of all humans.

Besides her role as a religious figure, Nüwa has also been featured in a few video games. She was included in Arcane Legions, Smite, and in Koei’s Warriors Orochi 2 where she wields a sword and shield.