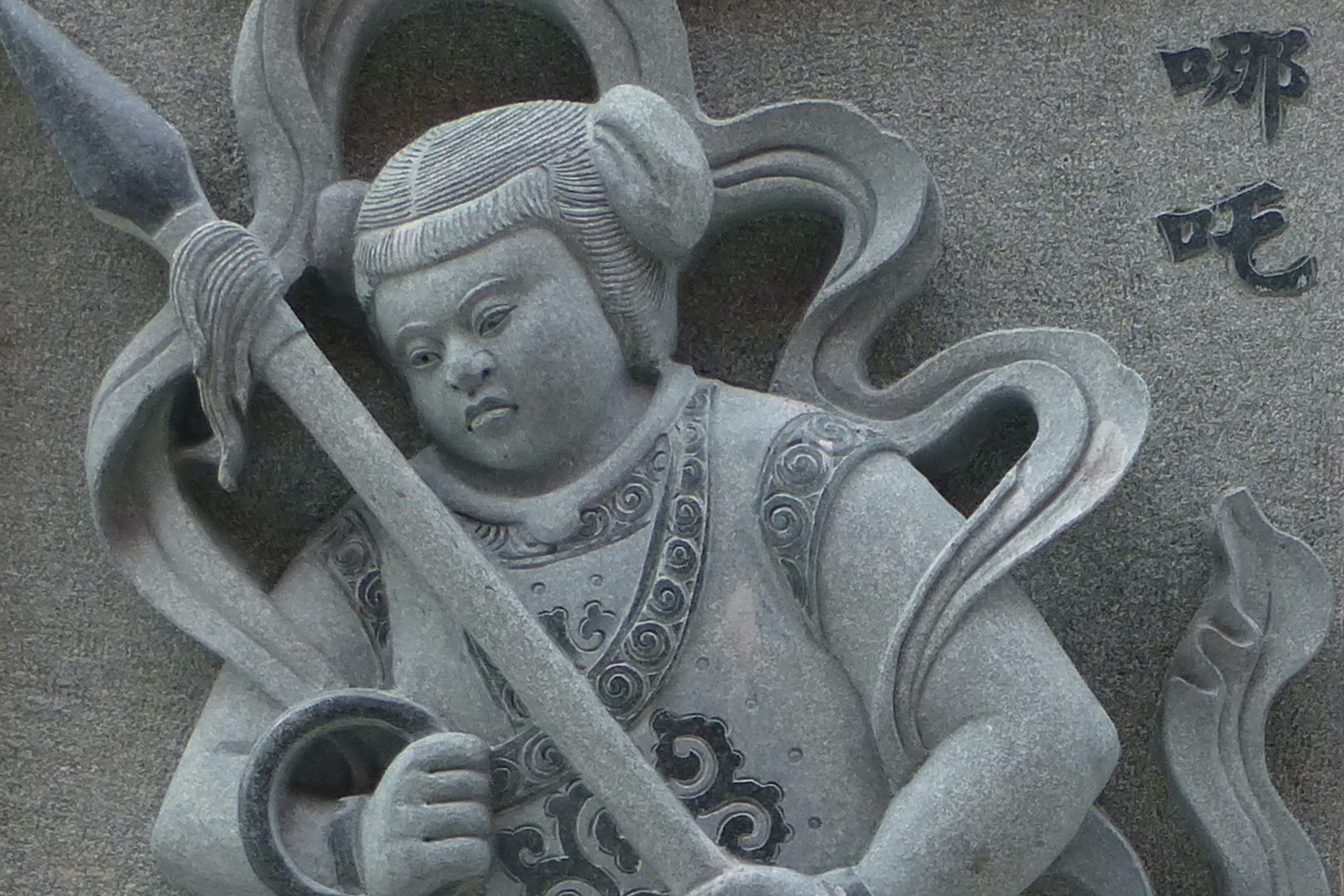 In Chinese mythology, Nezha (哪吒) is a precocious teenage deity who serves as a patron saint of young adults. After gestating in his mother’s womb for three years and six months, Nezha was born with superhuman strength and the ability to speak. His Chinese myth is based off of the Hindu god, Nalakuvara.

Nezha’s name was originally borrowed from the Hindu god, Nalakuvara, and transliterated in Chinese to Nàluójiūpóluó (那羅鳩婆羅.) Over the years, his name was eventually corrupted and shortened down to Nǎzhā (哪吒), and subsequently romanized to Nezha.

Nezha is always depicted as a teenage youth who wears his hair wrapped up in a warrior’s bun. He’s typically shown wielding a large spear while wearing the Wind Fire Wheels on his feet.

Nezha was born to a military commander named Li Jing (who’s also known as the “pagoda-wielding heavenly king”) and a woman called Lady Yin. Nezha has two older brothers named Jinzha and Muzha. The middle brother, Muzha, is eventually murdered by Nezha while trying to defend his father against his younger brother. His eldest brother, Jinzha, becomes a disciple of the bodhisattva Wenshu Guangfa Tianzun who would later stop Nezha from killing his father.

According to the Fengshen Yanyi, a historical text known as The Creation of The Gods, Nezha was born during the Shang Dynasty to a military commander and his wife. To say that Nezha had a complicated relationship with his parents would be an understatement.

His mother, Lady Yin, was pregnant with Nezha for a startling three years and six months. When she gave birth, a meaty ball of flesh emerged from her body. Her husband, thinking that his wife had just given birth to a demon, slashed at the lump of flesh with his sword. A fully grown boy lept from the ball, bowed and greeted his parents.

Shocked at what they had just witnessed, Nezha’s parents froze with fear. However, a Buddhist monk named Taiyi Zhenren who helped deliver Nezha told them not to worry and that they had been blessed with a boy who wielded godly powers. Taiyi Zhenren then decided to take Nezha under his wing as a disciple. Despite the monk’s kind words, Nezha’s parents would always be a little bit uncertain about their youngest son.

One day, Nezha was playing in the surf and noticed a little dragon boy off in the waves. Nezha was a very lonely child. Very few kids were willing to play with him because of the strange circumstances of his birth. So, he threw a ball at the dragon boy and asked him if he wanted to play. The boy, whose name was Ao Bing, was looking for a friend too and joined him on the surf. Nezha, however, didn’t know his own strength accidentally smothered his new friend to death while they were play-fighting.

Little did he know that Ao Bing’s father was the East Sea Dragon King, Ao Guang. Upon learning of his son’s death, Ao Guang was grief stricken and angry beyond reason. Ao Guang went to Nezha’s parents and demanded retribution—he wanted Nezha to die in return for his son’s own death. Torrential rains began to pour down from the heavens and Ao Guang threatened to flood all of China if he didn’t get what he wanted.

To save his family and everyone else in the country, Nezha chose to commit suicide and give his bones and flesh to Ao Guang as “payment” for his misdeeds. The rains stopped immediately. However Nezha’s soul was uneasy since he died at such a young age and couldn’t cross over to the afterlife. One night, Nezha appeared in a dream to his mother and asked her to build a temple for him so his soul would have a place to rest.

Delighted that her son wasn’t truly dead, Lady Yin went and commissioned a temple for her son. His father, however, felt that Nezha had brought too much shame and dishonor to his family, and took a hammer to the temple and tore it down. After seeing what his father had done, Nezha was filled with a murderous rage.

At the same time, Nezha’s master Taiyi Zhenren missed his student so much that he decided to reincarnate him out of a body made from lotus roots. After Nezha was reborn, the monk gifted Nezha a fire-tipped spear and the Wind Fire Wheels that gave him the ability to move at incredible speeds. Nezha immediately went to hunt down his father.

When Nezha’s father saw him coming down the road, he started to run for his life. He found his second youngest son, Muzha, and begged him to defend him against Nezha. Nezha killed his brother without hesitation and was just about to strike down his father when he was stopped by two Buddhas, Wenshu Guangfa Tianzun and Randeng Daoren. Though they agreed that Nezha hadn’t been treated fairly by his father, they reminded him that killing one’s parents was a grave sin. Realizing that they were right, Nezha decided to reconcile with his father instead. Nezha’s story is meant to be an example of filial piety and show that children must respect their parents, no matter the reason or cost to one’s personal pride.

Nezha is a patron saint of sorts for misfits in society and is especially popular among teenagers. Since he travels around on fiery wheels, he’s also a favorite among taxi drivers and other professional drivers.

Nezha is a prominent figure in Chinese culture and has been featured in a number of TV shows, movies and songs. Perhaps most notably, he was the subject of the popular animated children’s TV show, The Legend of Nezha. He was also featured in Dragon Ball as Chiaotzu and is a character in the video game, Warframe.