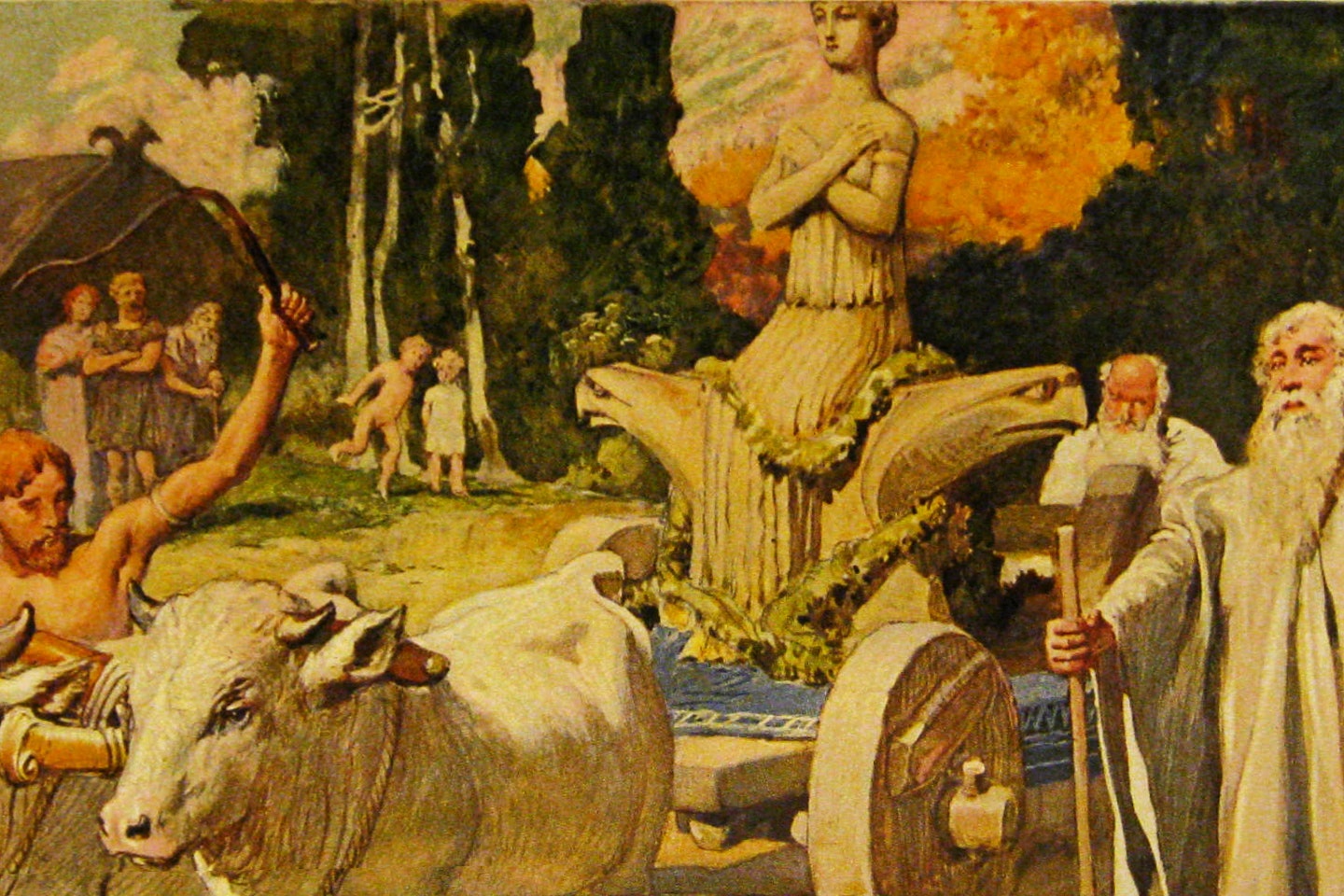 Worshiped in Scandinavia and the Germanic territories, Nerthus was an obscure goddess associated with peace and prosperity. She was connected to Njord, the Norse god of the sea, though whether they were consorts or separate embodiments of the same deity remains unclear. What little is known about Nerthus comes from the first century writings of the Roman historian Tacitus, rather than more traditional sources of Norse mythology.

The name “Nerthus” stemmed from the Proto-Germanic word Nerthuz-, meaning “strong, vigorous, healthy.” Linguists have identified “Nerthus” as the Germanic, feminized equivalent of the Old Norse word “Njord,” the name of a Norse sea god. This connection has led some scholars to conclude that Nerthus and Njord were, in fact, the same deity, and that by the Viking Age (ca. 800-1100 CE) the former had evolved into the latter. Others hold that Nerthus became identified with the Vanir tribe as a whole, rather than with any specific deity.

Known as a bringer of peace, Nerthus was honored during a ritualistic cart procession. During this ceremony, the goddess’s priests would wheel a cart draped with her sacred cloth through Germanic villages, causing inhabitants to put aside arms and embrace each other in celebration. While little is known about Nerthus outside of this ritual, she was thought to reside in her sacred grove on an as-of-yet unidentified island.

Nerthus’ familial relations remain largely unknown. She may have been a consort of the Norse god Njord.

Nearly everything known about Nerthus stems from the Roman historian Tacitus’s Germania, an account of the Germanic tribes published near the end of the first century CE. Tacitus’s description of Nerthus largely focused on the cart ceremony honoring the deity:

After them come the Reudingi, Aviones, Anglii, Varini, Eudoses, Suarini and Nuitones, behind their ramparts of rivers and woods. There is nothing noteworthy about these peoples individually, but they are distinguished by a common worship of Nerthus, or Mother Earth. They believe that she interests herself in human affairs and rides among their peoples. In an island of the Ocean stands a sacred grove, and in the grove a consecrated cart, draped with cloth, which none but the priest may touch. The priest perceives the presence of the goddess in this holy of holies and attends her, in deepest reverence, as her cart is drawn by heifers. Then follow days of rejoicing and merry-making in every place that she designs to visit and be entertained. No one goes to war, no one takes up arms; every object of iron is locked away; then, and only then, are peace and quiet known and loved, until the priest again restores the goddess to her temple, when she has had her fill of human company. After that the cart, the cloth and, if you care to believe it, the goddess herself are cleansed in a secluded lake. This service is performed by slaves who are immediately afterwards drowned in the lake. Thus mystery begets terror and a pious reluctance to ask what the sight can be that only those doomed to die may see.1

A minor planet named after the Germanic deity, “601 Nerthus,” lies in the main asteroid belt between Mars and Jupiter.