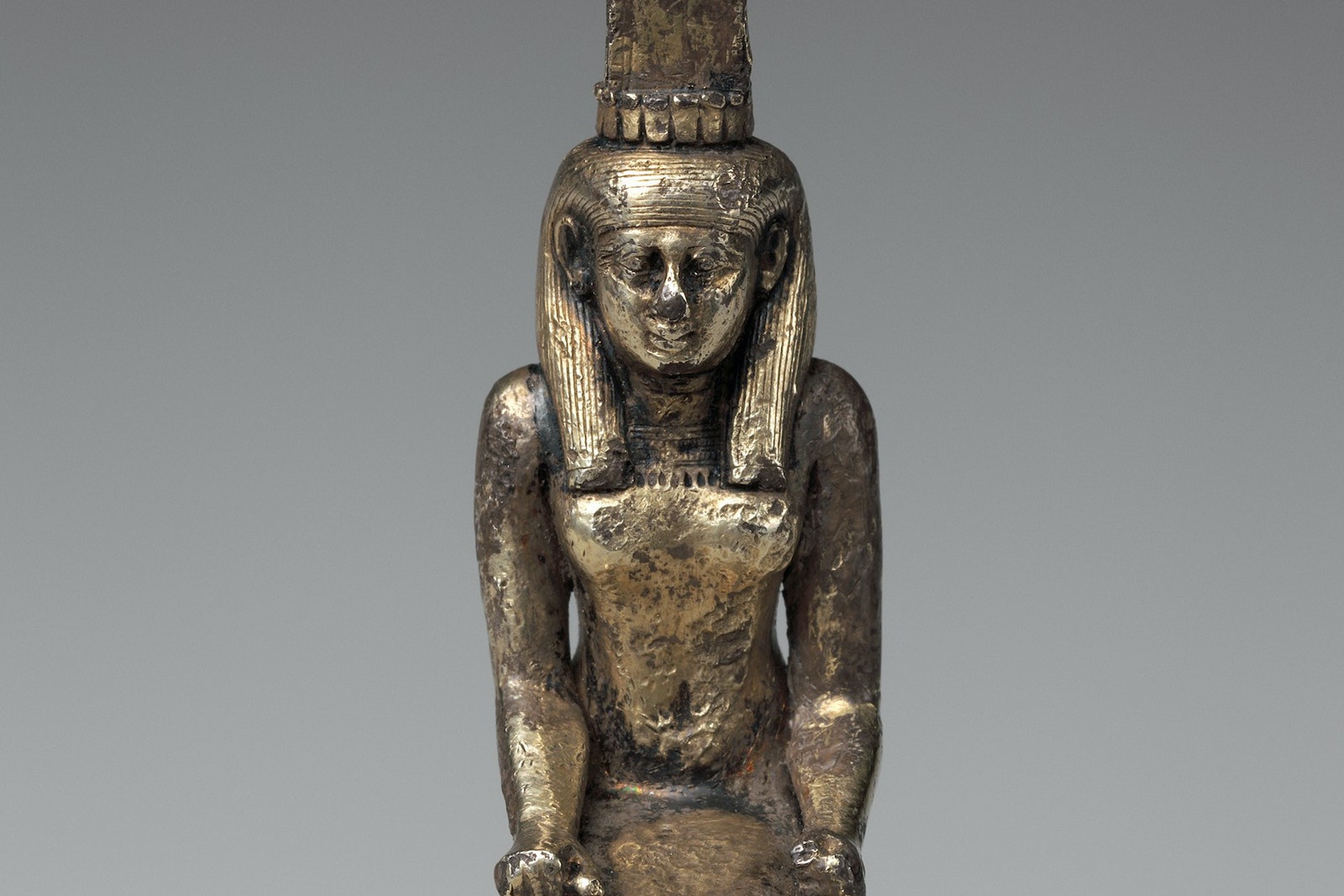 Nephthys was the youngest child of the sky goddess Nut and earth god Geb. Unlike her brothers and sister, she was a relatively minor deity in the Egyptian pantheon. Though Nephthys was married to Set, her relationship with him was distant at best. Her relationship with Osiris, however, was both more intimate and significant. Nephthys seduced him and subsequently gave birth to Anubis, who would ultimately be raised by her sister Isis. Nephthys was also a key figure in Egyptian funeral rites.

Nephthys’s name meant “Lady of the Mansion,” or “Lady of the House.” 1 In this context, the word “house” meant the portion of the sky in which the sun god Horus resided; as such, the name likely referred to priesthood rather than homemaking.

In art, Nephthys was usually depicted as a woman bearing the sign of her name atop her head. Like her sister Isis, she was sometimes shown as a kite (a small bird of prey).2

Nephthys and her sister Isis were commonly sights in tombs, as both goddesses attended the mummification of Osiris and served as protectors of the dead. The two goddesses were often depicted as identical, save for the symbols atop their heads. This detail proved to be significant during Nephthys’s seduction of Osiris, in which she deceived him into believing that she was, in fact, Isis.

Nephthys was one of several Egyptian weaving gods, and the bandages Osiris was wrapped in were sometimes referred to as the “tresses of Nephthys.”3

Like Isis and Osiris, Nephthys and Set were married before birth.5 Though the marriage of Isis and Osiris was full of love, Nephthys and Set’s relationship was not. In later myths, Nephthys had an affair with Osiris and gave birth to his son Anubis. Fearing that Set would discover her infidelity, Nephthys discarded her child in the wilderness. Anubis was ultimately rescued and raised by Isis.

Despite having the same lofty origins as her brothers and sisters, Nephthys was only ever a supporting character in Egyptian mythology. Though her siblings developed cults of worship, Nephthys had no such cult. She was, however, a common figure on amulets made during the Late Period (664–332BCE).6

With few exceptions, Nephthys always appeared in myths alongside her sister Isis. Together, the two sisters represented the “wailing women” that were an integral part of the Egyptian funerary rites.7

The Sham Marriage of Nephthys and Set

Nephthys’s marriage to Set was quite different from the marriage of Isis and Osiris. Nephthys seemingly lived in fear of her husband, and the couple had no children together.

The Pyramid Texts referred to Nephthys as a “substitute without vulva,” or, alternatively, “an imitation woman with no vagina.”8 This line suggests her marriage to Set was never consummated. In fact, most literary sources suggest that Nephthys lived with Isis and Osiris despite being married to Set.9

The Conception of Anubis

Nephthys’s most significant role in Egyptian mythology was her seduction of Osiris and the subsequent birth of Anubis. The Greek writer Plutarch described the event in his Moralia:

They relate also that Isis, learning that Osiris in his love had consorted with her sister [Nephthys] through ignorance, in the belief that she was Isis, and seeing the proof of this in the garland of melilote which he had left with Nephthys, sought to find the child [Anubis]; for the mother [Nephthys], immediately after its birth, had exposed it because of her fear of Typhon [Set].10

Though the passage provided little information, it did reveal that Osiris believed Nephthys to be his wife. This was significant, for adultery was a serious charge in Ancient Egypt. While ancient books of law are hard to come by, most literary sources agree that adultery was a serious charge. Diodorus of Sicily wrote that male adulterers would be emasculated while female adulterers would have their noses sliced off. Other sources have suggested the universal punishment for adultery was death.11

Within the context of this story, Osiris was blameless; he knew not that he had sinned. Curiously, Nephthys never faced any consequences for her actions. Even Isis—who was well aware of the tryst—did not hold any ill will towards her sister. According to Plutarch, Nephthys abandoned her child in the wilderness, fearing that her husband would discover the affair. This practice was relatively common in Rome, and may have been a case of Plutarch taking artistic license with the myth.12

Note: The cult of Anubis predated both Nephthys and the Osirian cult. After Osiris rose to prominence, Anubis’s role in Egyptian cosmology was rewritten to fit the new hierarchy; he subsequently became Nephthys’s child.

The Wailing Women: Isis and Nephthys

Lamentation for the dead was an important part of Egyptian funeral practices. This tradition stemmed from the story of Osiris’s murder at the hands of his brother Set. In this myth, Set threw Osiris’s body into the Nile, making its recovery extremely difficult. Isis eventually found Osiris’s body and brought it to Anubis to be embalmed.

Nephthys played a supporting role during these events, and accompanied her sister during Osiris’s funeral procession. This act established a tradition where two women would walk with the coffin—one at the front and one at the back.13

The religious ceremony of the wailing women was important because it helped to establish the veracity of Plutarch’s account of Osiris’s murder. While few Ancient Egyptian sources recounted the story of Osiris’s death, images of funeral processions were relatively common. Such images suggest that the Egyptian religion was concerned more with ceremonial rites than it was with doctrinal knowledge.14

Just as Nephthys played second fiddle to her more renowned peers in myth, she has been equally overshadowed in popular culture. References to her are rare in modern works, likely due to her comparatively minor role in Egyptian cosmology.

The English doom-metal band With The Dead’s eponymous album included a track entitled “Nephthys.” Though the song referenced Egyptian funeral practices, it did not mention any of Nephthys’s unique mythological attributes.16

In the video games Age of Mythology and Age of Empires: Mythology, Nephthys was among the gods that players could have their civilization worship. She was a secondary goddess, and as such could only be worshipped in conjunction with Isis or Set.17