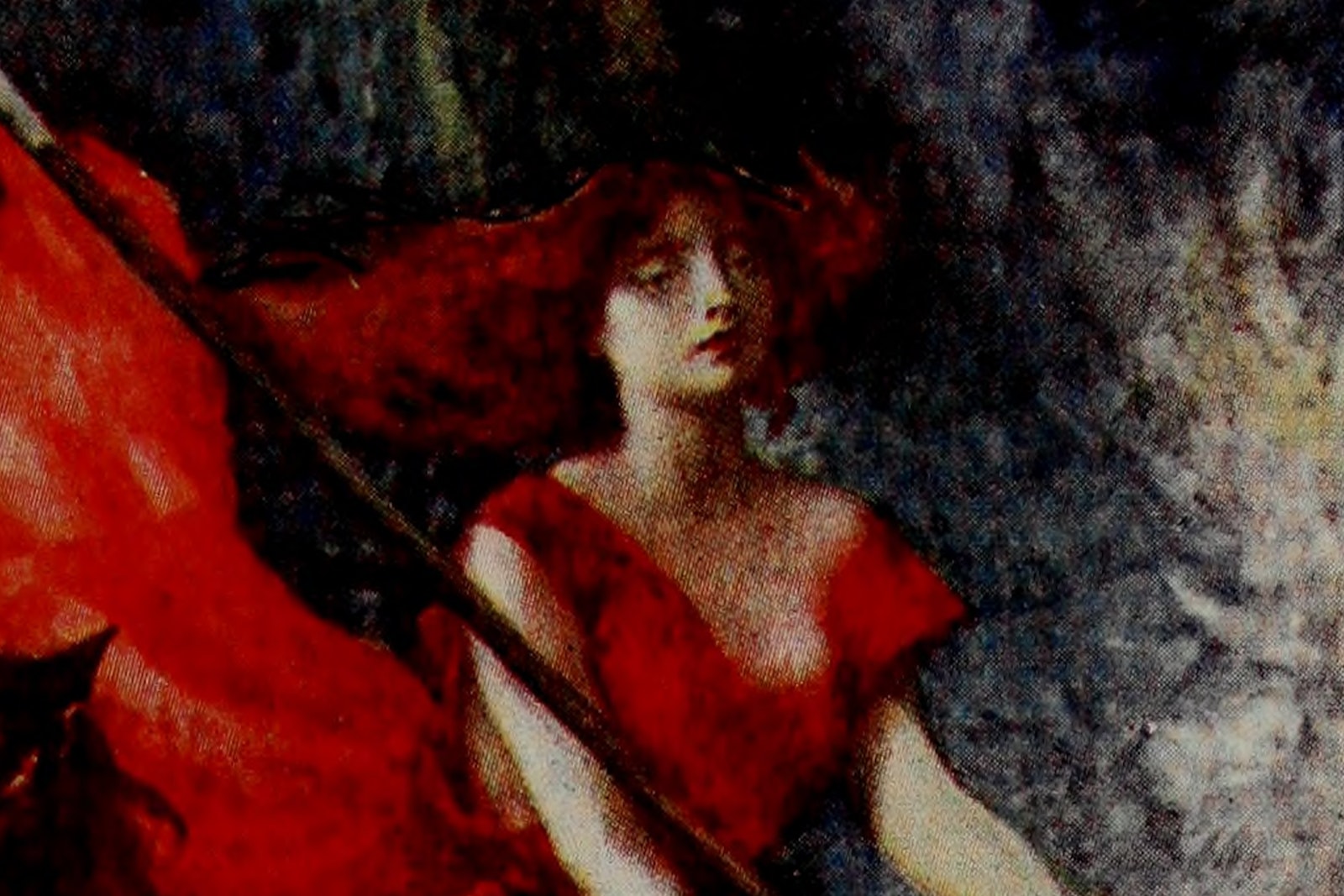 Appearing before great battles as the goddess of war, death, and fate, the Morrígan offered prophecy and favor to heroes and gods alike. She was often depicted circling the battlefield in the form of a raven to carry away and eat carrion, though she could also appear as a beautiful woman to seduce powerful men. She was a cunning shapeshifter and a terrifying omen of death to the characters of Irish mythology.

The Morrígan is also associated with several sacred and natural sites across Ireland.

The name Morrígan appears in both Old Irish (Morrígan) and Middle Irish (Mórrígan). Scholars disagree on the exact etymology of this name, which has two different interpretations based on the first syllable of the word. Mor, from the Old Irish form of the name, can be interpreted as “phantom.”2 According to linguist Whitley Stokes, it is a cognate of the Anglo-Saxon word maere, which still survives in the modern English nightmare.3 However, mor is an otherwise unattested word in Old Irish.

In the Middle Irish period the name was frequently spelled as Mór (with an accent over the “o”), which means “great.”4 The second part of her name, rígan, means “queen”5 and is a cognate of the Latin regina.6 Thus, her name can be interpreted as either “Great Queen” or “Phantom Queen,” though “Great Queen” is preferred among scholars.

Morrígan was sometimes styled as Morrígu. Both Morrígan and its variants were occasionally used as a generic name for supernatural female figures.7

The Morrígan was an omniscient and powerful figure who would occasionally bestow her prophecies and magical favors on heroes and kings—though usually for a price. In the Táin Bó Cúailgne (The Cattle Raid of Cooley), the Morrígan speaks the following ominous prophecy about the war to come:

Among corpses of men

In addition to being a prophetess, the Morrígan was also a shapeshifter and would often appear in multiple forms throughout a single story. Her most common forms were a shapely maiden, a fierce warrior-queen, an old crone, and a raven.9

Due to her close connection to prophecy and fate, the Morrígan was often present at the deaths of prominent figures; for instance, she appeared as a raven who landed on the shoulder of the dying hero of Ulster, Cú Chulainn.10 She was also occasionally portrayed as an otherworldly washerwoman, seen washing the blood-stained clothes of the dead.11

Several locations in Ireland are linked to the Morrígan by name. Some examples include Fulacht na Mór Ríoghna (Cooking Pit of the Morrígan) in County Tipperary, and two hills in County Meath known as Da Cích na Morrígna (Two Breasts of the Morrígan).12

One of the most prominent characteristics of the Morrígan is her tripartite nature. In many stories, she appears as both an individual and as three goddesses acting under a single name.

The goddesses could also act independently of each other. In the Táin Bó Cúailgne, Nemain and Badb, two of the goddesses who make up the Morrígan, screech out to the men of Ireland under cover of night. The sound of their calls is so terrifying that 100 men die of fright.16 The shriek of the Morrígan was a horrible omen of misfortune to come.

In Lebor Gabála Érenn (The Book of the Taking of Ireland), a story that explains the origins of the peoples of Ireland, the Morrígan is listed as the daughter of Ernmas, a mother-goddess.  Ernmas was herself the daughter of Nuada, a king of the magical Tuatha Dé Danann (“Tribe of the Goddess Danu”).17 The Morrígan’s father remains unknown. Her siblings are variously listed as Ériu, Banba, and Fódla—who made up the triple goddess representing the spirit and sovereignty of Ireland—as well as Badb and Macha.

The Morrígan was married to the Dagda, the “Good God” and one of the kings of the Tuatha Dé Danann.

In Lebor Gabála Érenn, the Morrígan is named as a member of the Tuatha Dé Danann, a tribe of magical people. The tribe’s arrival in Ireland was met with resistance by earlier settler groups of the island, including the supernatural races of the Firbolg and the Fomorions. The Tuatha Dé quickly found themselves at war with the Firbolg, culminating in two fierce battles.

There were two Battles of Moytura, or Cath Maige Tuired. In The First Battle of Moytura, the Morrígan and her sisters aided in battle by casting magic spells:

It was then that Badb and Macha and Morrígan [...] sent forth magic showers of sorcery and compact clouds of mist and a furious rain of fire, with a downpour of red blood from the air on the warriors’ heads.18

Ultimately, the Tuatha Dé were victorious and established a foothold in Ireland.19 More conflict, however, was on the horizon. The Fomorions proved more difficult to defeat in the Second Battle of Moytura. As the Tuatha Dé prepared for battle against the Fomorions, the Dagda sought his wife, the Morrígan, for prophecy. He found her at the ford of a river, where they proceeded to have intercourse. When they finished, the Morrígan prophesied that the Tuatha Dé Danann would indeed win the battle, though their victory would come at the cost of great bloodshed.20

On the day of battle, the gods gathered and prepared to fight the hordes of Fomorions. When asked what skills the Morrígan would bring to battle, she replied, “What I shall follow I shall hunt.”21 The battle quickly turned into a bloodbath and ended when the Morrígan incited bloodlust with her cries to the Tuatha Dé Dannan. The Fomorions fled from her and perished in the sea.22

The Morrígan was featured prominently in the Ulster Cycle of tales, where she both assisted and antagonized the hero of the cycle, Cú Chulainn.

In Táin Bó Regamna (The Cattle Raid of Regamain), Cú Chulainn attacks an old woman driving a heifer from his territory. However, the woman transforms into a raven, and Cú Chulainn, realizing that it is the Morrígan, states that he would have acted more wisely had he known who she was. As punishment for his misbehavior, the Morrígan foretells of her own presence at Cú Chulainn’s death in the Táin Bó Cúailnge:

Then he saw that she had become a black bird upon a branch near to him. “A dangerous woman thou art,” said Cú Chulainn. [...] “It is at the guarding of thy death that I am; and I shall be,” said she.23

Later, in the Táin Bó Cúailgne, she appears as a raven warning the Brown Bull of Cooley to flee Ulster before Queen Medb of Connacht can capture it. As Medb invaded the north, all the men of Ulster were inflicted with a debilitating curse. Cú Chulainn alone was spared, and he single-handedly defended Ulster’s borders.

During a break in the combat, a young maiden offered herself to Cú Chulainn as a lover, but was promptly rejected. As he began fighting once more, Cú Chulainn found himself under attack by various animals: first an eel, then a wolf, and finally a heifer. Cú Chulainn successfully defended himself from each of these animals, injuring them in the process.

Following his victory, Cú Chulainn met an old woman milking a cow. The woman was blind in one eye and had a broken leg and cracked ribs; these injuries matched the wounds the warrior had inflicted on his animal attackers. The old woman offered Cú Chulainn three drinks from her heifer, and he blessed her after each drink. With each blessing she received, one of the woman’s wounds healed. When she was fully healed, the woman at last revealed her true nature as the Morrígan. She reminded Cú Chulainn of his previous insults and warned him of his impending death before departing.

During a later battle with Queen Medb’s warriors, the Morrígan’s prophecy at last came true: Cú Chulainn was mortally wounded. He vowed to die standing up and used his exposed entrails to lash himself to a stone in the hopes he might trick his enemies into thinking he was still alive. The tactic worked, and the opposing forces relented. It was only when a single raven, the Morrígan, landed upon Cú Chulainn’s shoulder that his foes realized the truth.24

The Morrígan is unique to Irish mythology, though scholars have found similar figures in Celtic lore. One such figure was Morgan le Fey, the great antagonist of Arthurian legend, who shared many attributes with the Morrígan. Both were shapeshifters and prophets who appeared in multiple forms. While some scholars believe the figures’ names stemmed from the same etymological root, Morgan and Morrígan have entirely separate meanings in Welsh and Irish, making the connection tenuous at best.25

The Morrígan also bears similarities to sovereignty goddess figures in Irish mythology. These figures are often represented as a conduit to the land and rule of Ireland—that is, the fertility of the goddess figure reflects the fertility and prosperity of the land.26 The Morrígan is closely tied to the landscape through the areas of Ireland that bear her name in the Dindshenchas (which features tales of how places in Ireland earned their names).

It has been hypothesized that the Morrígan is connected to the bean sidhe, or banshee, of Irish folklore. The ominous shriek of the Morrígan and her presence at the death of men may have served as inspiration for the banshee, or they may come from the same oral tradition.27

Apart from Celtic mythology, many similarities can be seen between the Morrígan and the Valkyries of Old Norse legend, including their appearance either alone or in threes,28 their ability to prophesy,29 and their association with birds.30 According to Celtic scholar Patrick K. Ford, mythological women like the Valkyries and the Morrígan represent the full circle of life: they had the power to give life (by giving birth) and take it away (by choosing who would die on the battlefield). Thus, it was natural for female figures to know the fates of men.31

The Morrígan is a frequent figure in popular media and has retained a great deal of cultural relevance as a result.

The Morrígan has also appeared in several comic book series, including Marvel Comics—where she is depicted as a powerful goddess in the Celtic pantheon—and The Wicked + The Divine. Finally, she is a character in several video games, including Darkstalkers and the Dragon Age series.