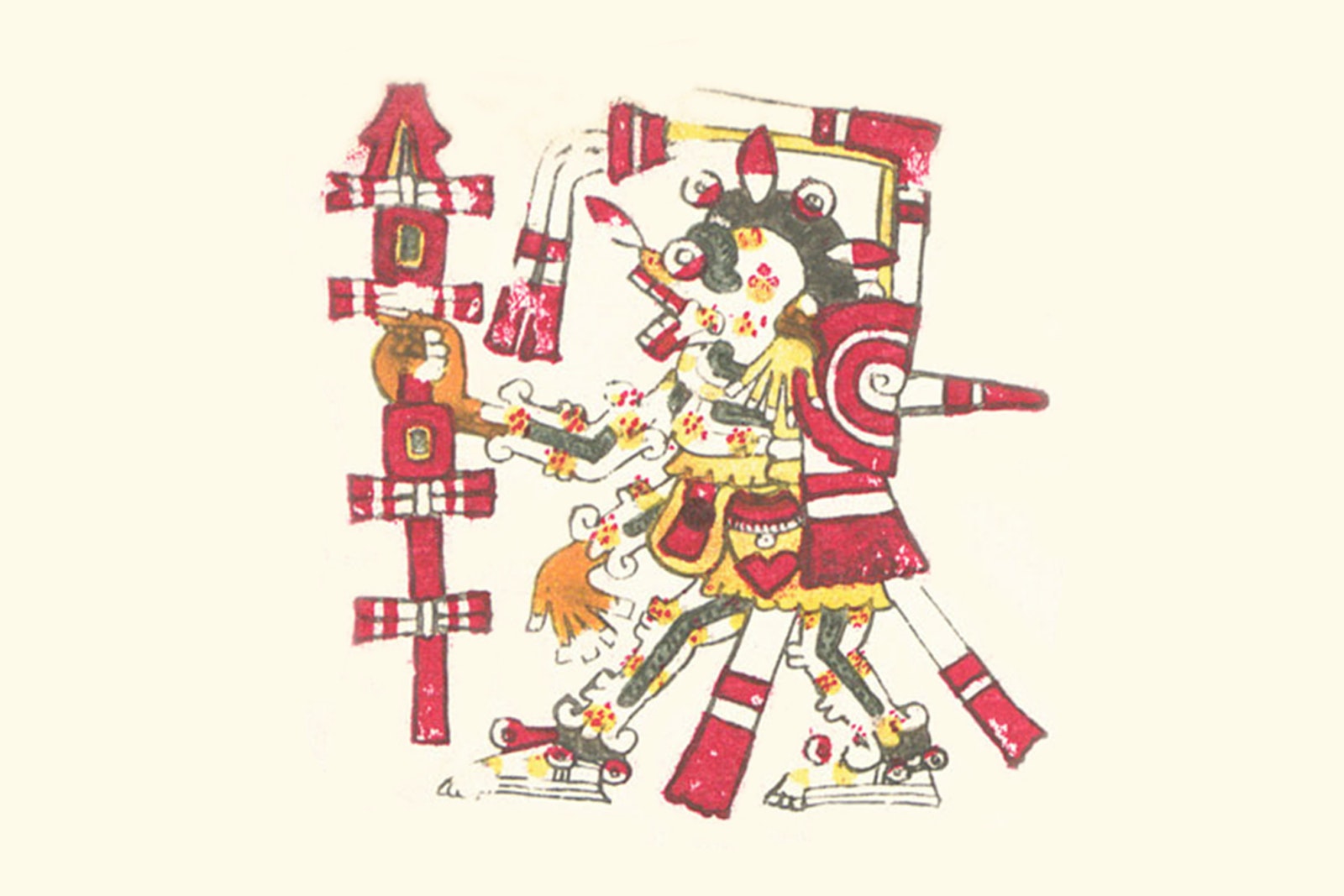 Mictlantecuhtli was the Aztec god of death who ruled over Mictlan, the land of the dead. Like Hades, the Greek underworld, Mictlan was where most people would spend their afterlife, regardless of moral standing.

Mictlāntēuctli’s name reflects his role in Aztec cosmology, as well as his place of residence. His name comes from his status as the ruler of Mictlan, and simply means “Lord of the Land of the Dead.”

Mictlantecuhtli was most commonly depicted as a skeletal figure, though reliefs have also been found depicting him as a skull with eyes.1 He was sometimes shown with his mouth open, ready to receive the setting stars that disappeared during the day.

In the Aztec universe, each of the cardinal directions was associated with one of the godly realms. Mictlan was believed to be located in the “north;” the direction was therefore associated with Mictlantecuhtli.

Like several other early Aztec gods, Mictlantecuhtli was not born to another god, but was instead created by Xipe Totec, Tezcatlipoca, Quetzalcoatl, and Huitzilopochtli during their construction of the universe.

Mictlantecuhtli’s wife, Mictecacihuatl, was created at the same time as her husband, and the couple ruled over the underworld together. Such an arrangement was not usual; Aztec mythology frequently featured binary gods (usually in male-female pairs) who would share power over their respective domains of influence.

As the Aztec lord of the underworld, Mictlantecuhtli played a similar role to that of Hades in Greek mythology. Rather than serving as the judge of the dead, Mictlantecuhtli simply tried to maintain order in his domain. This desire for order sometimes led Mictlantecuhtli to clash with other Aztec gods and their more creationary desires.

Mictlantecuhtli was described extremely early in the Aztec creation story. After Ometecuhtli and his wife Omecihuatl bore their four children, nothing important happened for 600 years. Following this hiatus, their children—Xipe Totec, Tezcatlipoca, Quetzalcoatl, and Huitzilopochtli—began the process of constructing the cosmos. Their initial actions included creating the sun, a man and woman, maize, the calendar, and finally, the lord and lady of the land of the dead. According to the Codex Ramirez:

Then they created Mitlitlatteclet [Mictlantecuhtli] and Michitecaciglat [Mictecacihuatl], husband and wife, and these were the gods of the lower regions (infierno [sic]), in which they were placed.2

After the dawn of the Fifth Age, the world was without people. To remedy this, Quetzalcoatl set out to acquire the bones of the original humans from the land of the dead. Mictlantecuhtli told Quetzalcoatl he could have the bones, but only if he went around Mictlan sounding a conch shell with no holes in it.

Not one to turn down a challenge, Quetzalcoatl had worms drill a hole in the shell so that it could be played; he also filled the shell with bees so that it sounded constantly. Shortly after performing these tasks, Quetzalcoatl told Mictlantecuhtli that he had changed his mind and was going to leave Mictlan without the bones. This, however, was merely a ruse meant to cover his escape, as he had secretly already taken them.

Before Quetzalcoatl was able to escape Mictlan, however, Mictlantecuhtli discovered his ruse and had his minions dig a pit to trap him. Quetzalcoatl, who had been distracted briefly by a quail, fell into the pit, caused the stolen bones to scatter across the floor. Eventually, Quetzalcoatl manage to gather up the bones and escape Mictlan. Later, he mixed the bones with his blood and maize, creating the first humans of the fifth age. The Aztecs used this myth to explain why people often varied in height.3

#Cult of the Dead

The Aztec cult of the dead was centered around Mictlantecuhtli and Mictlan, although gods like Tlaloc, Huitzilopochtli, and Coatlicue were also associated with death under specific circumstances.

While most of the dead would find their way to Mictlan, some would find themselves transported to the realms of these other gods. Those who suffered a death by water (flood, lightning, certain illnesses) would end up in Tlalocan, while those who died in battle would join Huitzilopochtli for a time before being resurrected as hummingbirds. Those who died in childbirth would travel west with the setting sun, following Coatlicue or her guise of Cihuacoatl.4

The Aztec holiday Hueymiccaylhuitl, or great feast of the dead, celebrated the recently deceased and helped them as they traveled to Mictlan. Following someone’s death, the Aztecs would cremate the departed person’s remains. From there, the deceased soul would embark on a four-year journey through the various levels of the underworld and have to overcome a series of trials along the way. Eventually, those who had successfully completed the journey would find themselves in the deepest level of the underworld: Mictlan. Hueymiccaylhuitl was celebrated not only to aid those embarking on this journey, but also to allow the dead an annual opportunity to return and visit the land of the living.5

In the videogame Fortnite, the Mezmer skin was based on Mictlantecuhtli. The skin’s ID and cosmetic set items all belied its Aztec inspiration. The skin’s description, however, eschewed any mention of the Aztec pantheon:

Mezmer is a skin that gives an avatar a green outfit, big eyes, and zombie-like teeth. The skin combines horror with comedy.

Mictlantecuhtli appeared as a recurring character in the comic book series El Muerto: The Aztec Zombie. He also appeared in the 1998 comic “Daze of the Dead: The Numero Uno Edition.”

In 2007 the El Muerto: The Aztec Zombie comic book series was turned into a live action film simply titled El Muerto. Directed by Brian Cox, the film depicted Mictlantecuhtli as a skeleton. All of the character’s spoken lines were delivered in the Nahuatl language.