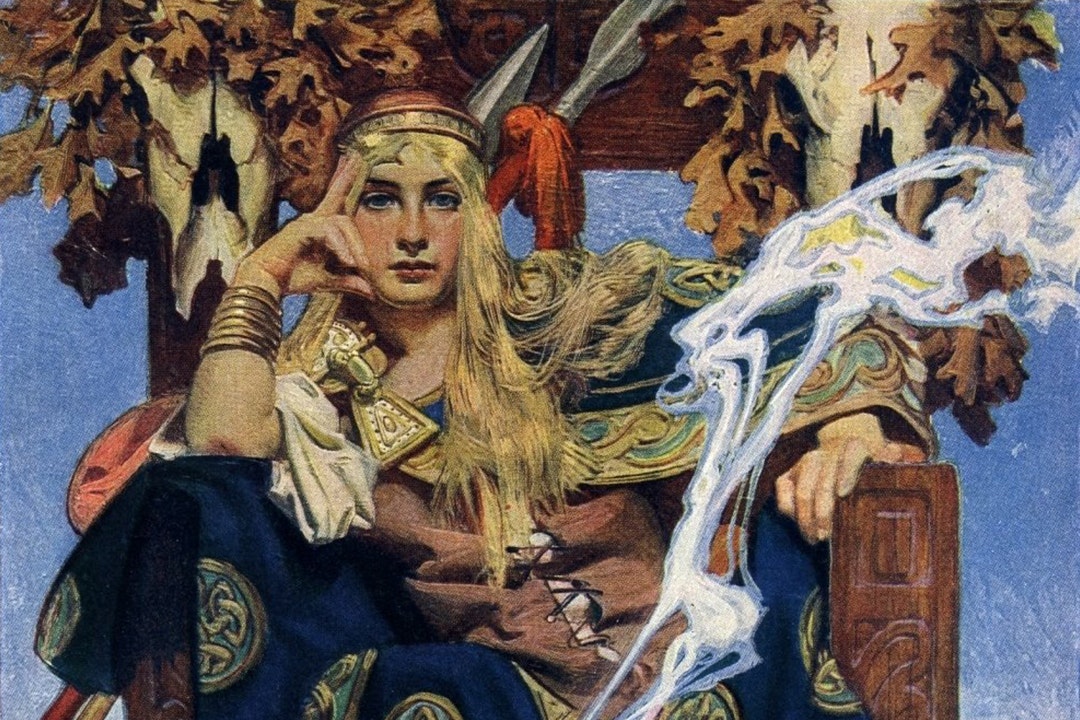 In Celtic mythology, Medb was Queen of Connacht, the great villain of the Ulster Cycle. Cunning and strong, she ruled Western Ireland and came to dominate much of the island. Her struggles with her former husband, Conchobar of Ulster, put her in direct conflict with Cú Chulainn.

Medb, from the early modern Irish Meadhbh, can be translated to mean “she who intoxicates.” Anglicized, this name is sometimes written as Maeve, Mave, or similar spellings, and in some cases she was known simply as Queen of Connacht.

Medb was a powerful queen who was stronger than many of her suitors and consorts, both physically and mentally. These attributes were also used to describe a similarly named Irish goddess of sovereignty, who ruled over Tara, where the High Kings of Ireland were crowned, which indicates that there may have been a connection between the two stories.

Medb’s personality was strong and she demanded three things of all her suitors and husbands: that there be no fear, meanness, or jealousy towards her. She had many lovers, a testament to her beauty and desirability.

Medb was the daughter of Eochu Feidlech, the Enduring High King of Ireland, and his wife, Cloithfinn. She had five sisters and four brothers, and was first married to Conchobar mac Nessa, King of Ulster, to whom she bore a son, Glaisne. By her third husband, Ailill mac Máta, she had seven sons, all named Maine, due to a prophecy as to who would kill Conchobar. She also had a one daughter, Findabair, who was as cunning and beautiful as her mother.

Medb’s story was part of the larger Ulster cycle.

Early Life and Marriage to Conchobar

As the daughter of Eochu Feidlech, the High King of Ireland, Medb was offered in marriage to Conchobar, King of Ulster, whose father, Fachtna Fáthach, the previous High King, had been slain by Eochaiud. The two married and had a son, Glaisne, but both were unhappy and quarreled constantly. In time, the strong-willed Medb left the marriage and returned to her father’s house.

Her sister, Eithne, then married Conchobar. When Eithne was in her ninth month of pregnancy, Medb paid her a visit. Angry that her sister had married her ex-husband, Medb slew her. To save her unborn child, the doctors had to extract the infant, a son named Furbaide, via cesarean section.

Eochu deposed of the King of Connacht, Tinni mac Conri, and Medb gladly took his place, even sharing a throne and bed with Tinni to prevent further bloodshed. During a meeting at Tara, where High Kings are crowned, Conchobar raped Medb out of revenge for the murder of Eithne. Tinni sought single combat with Conchobar and was slain, preventing a full war.

Thereafter, Medb set forth three criteria for all future husbands: that they be fearless, kind, and without jealousy towards her, understanding that she took many lovers. Her second husband, Eochaid Dála, challenged one of her lovers, Ailill mac Máta, and when Ailill killed him, she took him as her third husband. Medb and Ailill had seven sons together. When Medb heard a prophecy that foretold that someone named Maine would murder Conchobar, she changed the names of all of her sons to Maine.

Medb believed that she should always be richer than her husbands, and when Ailill acquired a valuable stud bull, she insisted upon finding its equal. The only one of its kind was an animal named Donn Cúailnge in Ulster. She offered to buy it by many means, but its owner, Dáire mac Fiachna of Ulster, would not part with the bull. Medb was determined to take the animal by force. She raised an army of men, to battle the Ulster army, led by a fierce young warrior named Cú Chulainn.

As her forces marched over the border, a curse suddenly overcame the men of Ulster and they were doubled over with menstrual cramps. Only Cú Chulainn was untouched by the curse. He stood at the fords that divided Ulster and Connacht and challenged men to single combat. In each battle, the young champion was victorious. The fighting ended after three exhausting days.

By then, the curse that gave the men of Ulster menstrual cramps ended, and the army was ready to fight. In the ensuing battle, Medb became wrought with menstrual cramps herself. She ordered a retreat, but was cornered by Cú Chulainn. He held a spear to her throat, but when he realized that she was menstruating, he chose instead to defend her retreat, out of honor.

Ailill and Medb made peace with the Ulstermen and with Cuchulainn. For seven years after there was no wounding of men between them. Findabair stayed with Cuchulainn, and the Connaughtmen went to their country, and the Ulstermen to Emain Macha with their great triumph. Finit, amen.
-The Cattle Raid of Cualnge, by L. Winifred Faraday

Although Cúchulain later fell in battle to another of Medb’s invasion forces, Medb never did conquer Conchobar or Ulster. Indeed, the Conchobar of the prophecy that made her rename her sons was Conchobar, son of Arthur, a different man entirely.

Eventually, Ailill had enough of Medb’s many affairs and slew Fergus mac Róich, a man of Ulster whose wiles could only be conquered by Medb. Soon after Cú Chulainn’s blood brother, Conall Cernach, came to live with her, and when she caught Ailill mid-coitus with one of his lovers, she ordered Conall to kill Ailill, which he did gladly. Ultimately, he was slain by Ailill’s men.

Years later, Medb was slain while bathing in a pool at Inis Cloithreann on Loch Ree. Her nephew, Furbaide, sought revenge for his mother’s death and threw a piece of cheese with his sling, killing her instantly. Her heir, Maine Athramail, buried her at Knocknarea in County Sligo, facing her enemies in Ulster.

Medb was quite similar to several Queens of the Amazon, such as Hippolyta, and other warrior goddesses from myths across the world. As an Irish sovereignty goddess, she shared that role with Macha, Badb, Danu, the Cailleach, and the Morrígan.

Medb may be the inspiration for Queen Mab of Shakespeare’s Romeo and Juliet, who has since become a popular figure in fairy lore.

Medb is quite popular in modern culture, appearing in a number of print and visual media: