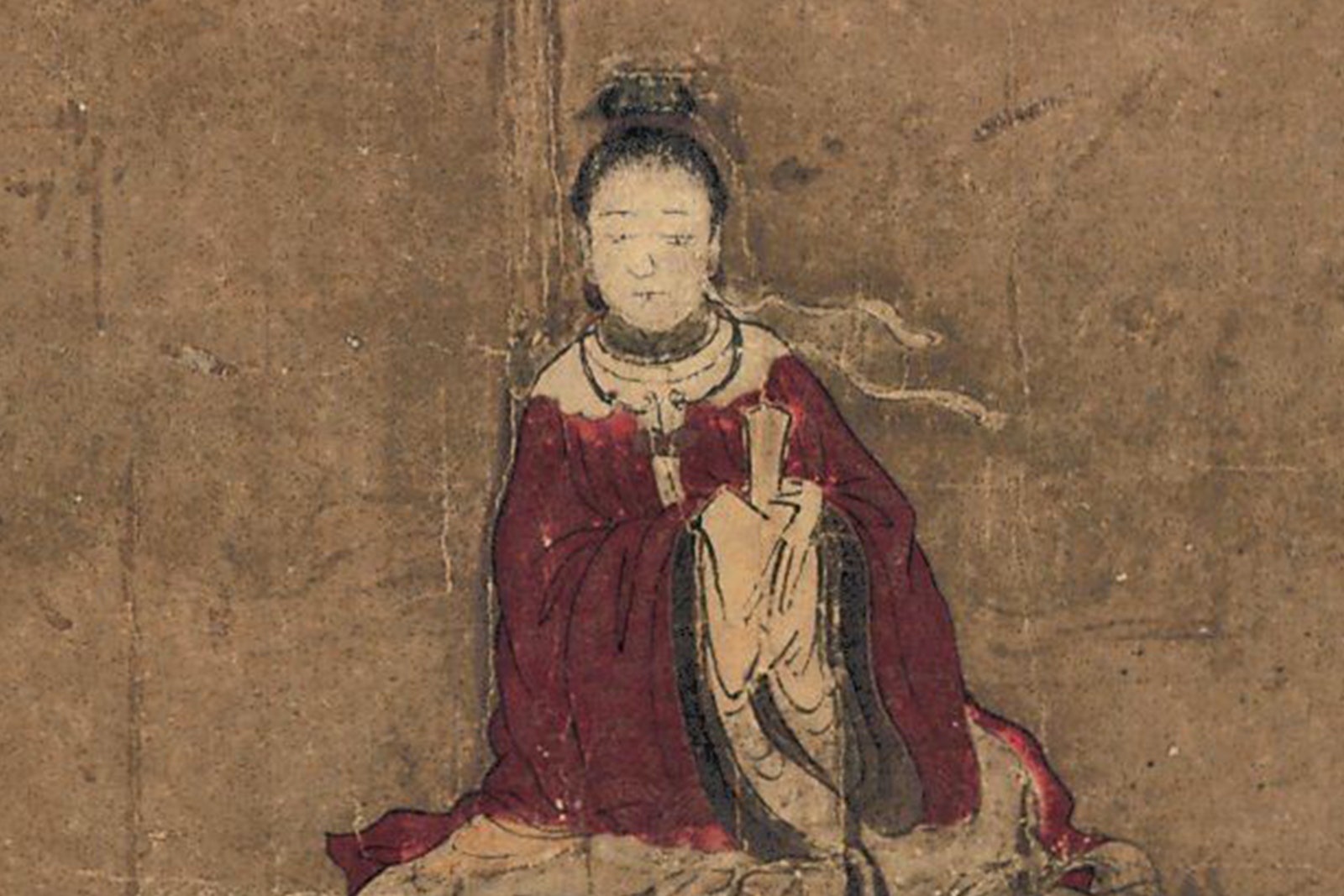 Mazu’s name is comprised of the characters mā (媽), meaning “mother,” and zǔ (祖) which means “ancestor.” Before she became a goddess, Mazu’s human name was Lín Mò (林默), or “Silent Lin.” In Taoism, she is known as Tian Shang Sheng Mu (天上聖母), or “heavenly goddess.” In the Southern regions of China, Mazu is colloquially called Ā-mā (阿媽), which can mean either “grandmother” or “mother.” She has a few other formal titles, like Línghuì Fūrén (靈惠夫人), meaning “Lady of Light and Kindness,” or Tiānhòu (天后) which means “Empress of Heaven.”

However, it’s said that when calling upon Mazu in times of urgent need, it’s best to address her by one of her more casual names. If she’s called upon by one of her formal titles, she’ll waste precious time getting ready and dressed up in her imperial regalia before coming to the aid of the person asking for help.

In art, Mazu is often depicted wearing bright red robes laced with shining jewels that help her be more easily seen by travelers at sea. Mazu is frequently depicted holding a ceremonial tablet that symbolizes her spiritual knowledge and wearing an imperial headdress that represents her godly nature.

Very little is known about Mazu’s life except that she was born to a poor family of fishermen. Her mother’s last name was Wáng (王) and her father was named Lín Yuàn (林愿). She was the youngest and only girl of the family and had four older brothers.

Unlike many Chinese mythological figures, Mazu was believed to have been a real girl named Lin Mo who lived off the coast of Fujian on Meizhou Island during the tenth century. Even as a human, Mazu was blessed with supernatural abilities and could accurately forecast the weather and predict the future. As a goddess, Mazu vowed that she would remain on Earth until all beings achieved enlightenment and exited the Cycle of Suffering.

Lin Mo is thought to have been born around 960 AD to a poor family of fisherman. When she was born, she didn’t cry or a shed a single tear. She would never gain the ability to talk even as she grew older, therefore she was nicknamed “Mò Niáng (默娘),” or “Silent Girl.”

Despite being mute, Lin Mo was blessed with a number of amazing gifts. She could accurately predict the weather. She would fall into deep trances (now believed to have possibly have been seizures) and would experience divine visions. Lin Mo also developed a fascination with medicine and became a healer in her hometown. In her free time, she completely devoted herself to the Goddess of Compassion, Guanyin, and vowed, like her idol, never to marry.

One day when her father and four brothers were fishing off the coast of Meizhou Island, dark, ominous clouds suddenly blocked out the sun and fierce winds began to blow off the coast—it was a hurricane. Her father and brothers's boat was rocked by the storm’s huge waves and capsized.

At the same time, while she was weaving at her loom, Lin Mo fell into a deep trance. In her pure spiritual form, she projected herself to her father and brothers’s boat, saw what had happened, and managed to get her brothers to land. Her mother didn’t realize what the young girl was trying to do and shook Lin Mo awake before she was able to save her father. In some versions of her myth, she was able to save her father and three of her brothers except for the eldest.

In her grief, Lin Mo climbed to the top of a high cliff and threw herself into the sea. Before she hit the water, her body transformed into a pure beam of celestial light and ascended to Heaven where she became the goddess Mazu. As the last of her light disappeared through the clouds, a bright rainbow appeared across the sky, signaling the end of the storm.

Mazu is said to be guarded by two demons, Qianliyan (千里眼), or “Eyes That Can See One Thousand Miles,” and Shunfenger (順風耳), or “Ears That Can Hear the Wind.” Before they became her protectors, both Qianliyan and Shunfenger had asked for Mazu’s hand in marriage. Mazu agreed, but only under the condition that they defeat her in combat. During the ensuing battle, she easily subdued both demons with her superior martial arts skills and with the help of a magic silk scarf that blew sand into their eyes, effectively blinding them. Instead of marrying her, Qianliyan and Shunfenger vowed to serve as her guardians and to never leave Mazu’s side.

Mazu has been a very popular religious figure in Chinese coastal communities since the Song Dynasty. Before typhoons, sailors would claim to see the bright red robes of Mazu on the water signaling the arrival of the impending storm. Mazu is said to appear as pure beam of light to sailors in need, though some have claimed to have seen the goddess herself riding on a chariot of clouds to save them. In 2009, UNESCO added Mazu Belief and Culture to its Representative List of the Intangible Cultural Heritage of Humanity.

Even though her myth originated in the Fujian Province, Mazu’s tale quickly spread throughout the Chinese-speaking world and even to foreign countries, like Vietnam and Japan. During the 19th and 20th century, Mazu’s story spread to the West when Chinese immigrants left their ancestral homes relocated to foreign soil. Once they became established in their new homes, they would often erect temples dedicated to Mazu to thank her for their safe journey—a sentiment that would lead to the construction of temples like the Thien Hau Temple in Los Angeles. Her holiday is celebrated on the 23rd day of the third lunar month.