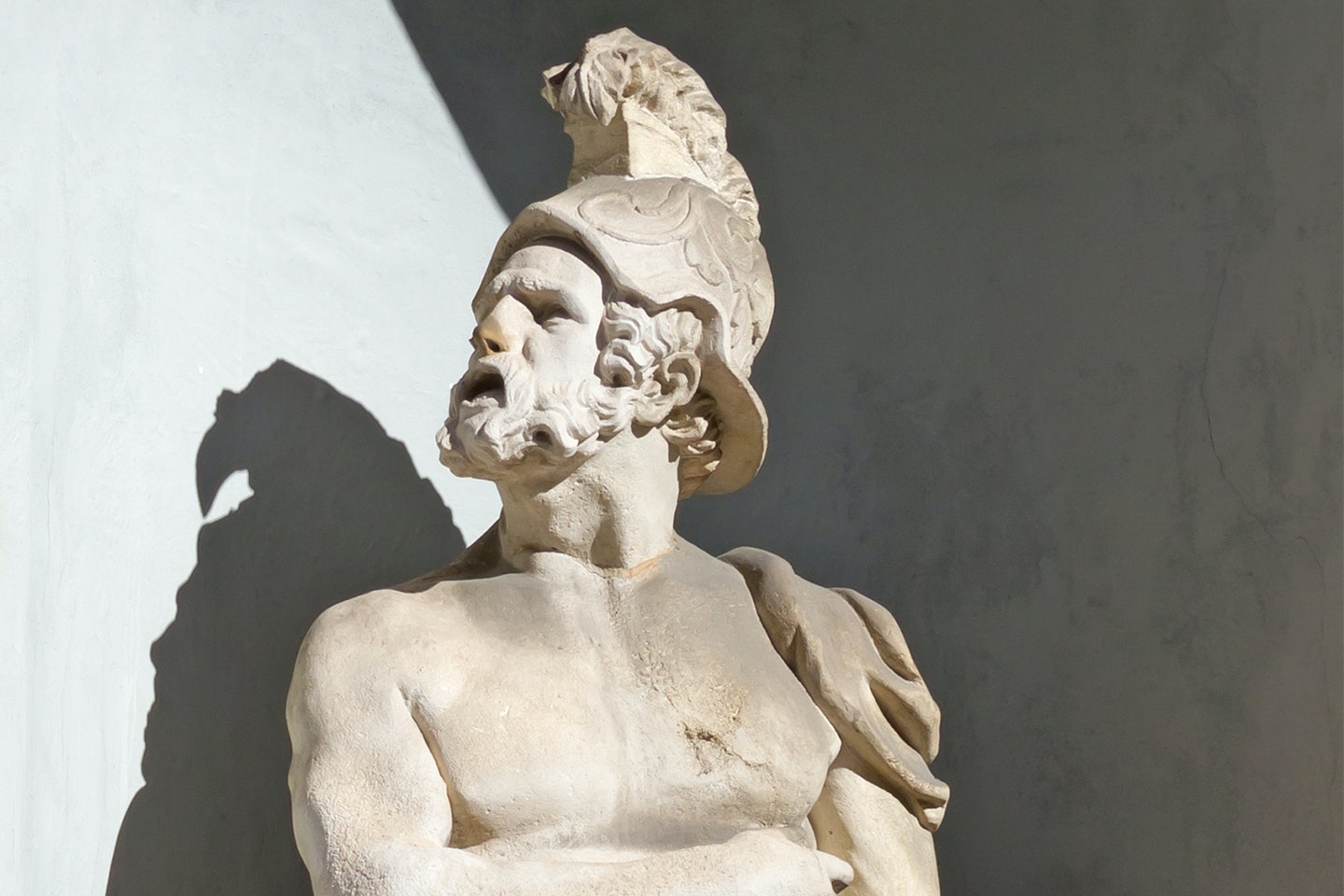 Furious Mars was the Roman god of rage, passion, destruction, and war. As a foundational deity, Mars had a mythology that was intimately intertwined with the Roman city-state. Mars ruled early Rome as a part of the Archaic Triad, a masculine ruling triumvirate that also included Jupiter and Quirinus (the deified Romulus). The early Romans revered Mars as a great raging god, whose fury inspired the savagery of warfare and produced the stunning accomplishments of the Roman arms. As Rome transitioned from city-state to empire and overtly embraced Greek cultural values, Mars lost his preeminent position in the Roman pantheon to Minerva, the goddess of tactical and strategic warfare.

Mars’ importance to the Roman people was embedded in the mythic history of Rome and the origins of the Roman state. According to Roman mythology, Mars raped the innocent Rhea Silvia and sired Romulus and Remus, twins who would go on to establish the fabled city.

Though the meaning of the name “Mars” remains somewhat elusive, the name itself was clearly adapted from the names of a pair of Italian deities. One was a proto-Italic deity called Mavors, a deity of which little is known. The other, more immediate influence was the Etruscan deity Meris, a god who was often depicted as an infant and may have been an Etruscan counterpart to the Greek Heracles (or Roman Hercules).

Mars was known by many epithets, each representing one of his many personas. As Mars Gradivus, or “Marching Mars,” the deity was revered for his a presence on the battlefield. Generals and soldiers alike swore oaths to Mars Gradivus, promising to fight furiously in his name. As Mars Quirinus, or “Mars of the Quirites", he was celebrated as a bringer of peace through war and a defender of the common man. He was also Mars Pater and Mars Pater Victor, or “Mars the Father” and “Mars the Father the Victorious,” titles that denoted his high standing in Roman religion and among the Roman people.

Romans also called him Mars Ultor, meaning “Mars the Avenger”. This title grew in popularity after the Octavian’s victories over Caesar’s assassins at the Battle of Philippi in 42 BCE. This was but one way in which the gods were used for political ends. Finally, Mars was Mars Augustus, meaning something like “Mars who is Awesome." This qualifier was later used by the Roman emperors to describe their own awesome omnipotence.

Mars controlled war and the passions that fueled it. He was represented both as a fully mature male with a beard and curly hair, and as a youth with smooth cheeks. He was shown often in the nude, perhaps a sign of the raw, unadorned forces he was thought to inspire. When clothed, he wore a military cloak, plumed helm, and cuirass. This last item was often adorned with the gorgoneion, a medusa head that was thought to ward off evil. His weapon was the spear, which would be wrapped in a laurel to symbolize peace. This symbolism spoke to Mars’s status as the god who brought peace through war.

Mars was the son of Jupiter and Juno, the king and queen of the Roman deities. Mars’ full siblings included Bellona, a goddess of war, Vulcan, god of metalworking and the forge, and Juventus, a goddess of youth. Mars had many half-siblings as well thanks to his father’s indiscretions. These half-siblings included Mercury, messenger god of commerce and communication, Proserpina, Ceres’ child famously abducted by Pluto, and Minerva, goddess of wisdom and defender of the Roman state.

A figure of primal masculinity, Mars was desired by many. His consorts included Bellona and Nerio, both goddesses of war associated with important cults in early Rome. He famously carried on a long and illegitimate affair with Venus, the goddess of love and sexual desire. In a separate tradition, Mars married Anna Perenna, the goddess of time and the changing of years. They proved to be a fiery couple. Mars’ passion could also be violent, as when he raped the Vestal Virgin, Rhea Silvia, a figure of incredible importance in the founding of Rome.

Mars was also the father of Romulus and Remus, who were conceived through his rape of Rhea Silvia. His fathership of the twin founders of Rome made Mars the progenitor of the Roman people.

Although Mars was generally considered to be the son of both Jupiter and Juno, another version of his mythology cast him as the offspring of Juno alone. According to the story (told by Ovid in the Fasti), Juno resented the fact that Jupiter had given birth to Minerva without the need of a mother. Minerva had been conceived by Jupiter and the Titan Metis, but when Jupiter swallowed the pregnant Metis, a fully grown Minerva burst forth from his forehead. Seeking vengeance against Jupiter, Juno traveled to the realm of Flora, a goddess of flowers, spring, and fertility. There, Juno laid bare her grievances and implored the goddess for help:

‘My grief,’ quoth she, ‘is not to be assuaged with words. If Jupiter has become a father without the use of a wife, and unites both titles in his single person, why should I despair of becoming a mother without a husband, and of bringing forth without contact with a man, always supposing that I am chaste? I will try all the drugs in the wide world, and I will explore the seas and the depths of Tartarus.’1

Flora acquiesced, giving Juno a special flower that made female creatures pregnant without the need of a male. Juno tested it on a barren heifer, which immediately birthed a calf. Convinced of its power, she then used the flower on herself and conceived Mars.

A recurring topic in the mythology of Mars was the affair he carried on with Venus. Though Vulcan and Venus had an unhappy marriage, Vulcan still took any affair Venus might have as a great offense. When Mercury saw Venus making love with Mars in Vulcan’s marriage bed, he quickly informed the cuckolded god. Though Vulcan was enraged, he did not act immediately. He waited patiently, and plotted his revenge. In his workshop, Vulcan crafted a net of material so fine that it could not be seen with the naked eye. He then laid the trap by placing the net over his bed. When Mars and Venus next made love, they became ensnared in the net and could not move. Vulcan then assembled the gods to witness the scene, and together they mocked the naked lovers.

Another well-known (and similar) story also featured Mars in an ill-fated love affair. The story (coming again from Ovid’s Fasti) began with Mars falling in love with Minerva, the goddess of both wisdom and the Roman state, who steadfastly maintained her virginity. Not one to be put off by a virgin’s wishes, Mars pursued the goddess anyway—to no avail. Minerva rebuked his advances, sending Mars to seek the help of Anna Perenna, a goddess of time. While Anna Perenna outwardly agreed to help Mars win the affections of Minerva, she secretly plotted to make the comely god of war her own. Putting her plan into motion, Anna disguised herself as Minerva and offered her hand in marriage to Mars, who eagerly accepted. After the marriage had been formalized, Anna revealed herself to Mars, who was very displeased. Not only had he lost Minerva, but he had also been duped into an unwanted marriage.

#Mars and the Founding of Rome

According to mytho-historical accounts of the founding of Rome, Mars was the father of the twins Romulus and Remus. While this story had countless variations, its core always remained the same. After Aeneas and his band of refugees arrived on Italian shores, he established a community that eventually came to be known as the kingdom of Alba Longa. One of the kings of Alba Longa was Numitor, a wise and just monarch. His reign was cut short, however, when he was overthrown by his wicked brother Amulius. Hoping to sever the royal line of Numitor, Amulius forced his brother’s daughter, the lovely and virtuous Rhea Silvia, to become a Vestal Virgin; this position carried with it a vow of abstinence.

Whether through outright lust or the desire to perpetuate the lineage of Numitor, Mars visited Rhea Silvia when she was sleeping and raped her. Sound asleep, Rhea Silvia dreamed that she planted seeds that grew into two trees. With time, these trees grew large enough to cover the entire world. When she awoke, Rhea Silvia discovered that she was pregnant with twins, who would come to be known as Remus and Romulus. Fearing that the twins might challenge his claim to Alba Longa, Amulius ordered that they be executed immediately. When the executioner set about the task, he took pity on the twins and sent them down the Tiber River in a basket. The twins eventually came to rest at a spot that would become Rome and were nursed back to health by a she-wolf.

#Mars and the Roman State Religion

Mars was a fixture of Roman religion and a key figure in the Roman pantheon. In the early days of the Roman state, Mars was regarded as a kind of second in command to Jupiter and occupied a formal spot in the Archaic Triad (of Mars, Jupiter, and Quirinus), which was thought to oversee Roman prosperity. In time, Mars’ position in the ruling triumvirate was supplanted by Minerva, who embodied a much different aspect of war. Where Mars inspired manly courage and bloodlust in battle, Minerva inspired the tactical and strategic thought necessary to conquer powerful Mediterranean powers such as Carthage, Macedonia, and Epirus. All of these powers fell to Rome in the early centuries BCE.

Mars was accorded the respect owed to a deity of his high office. Festivals were held to honor him in March and October, which marked, respectively, the beginning and end of the campaigning season. He was honored especially in March (a month named for him) with a host of festivals, including Mars’ dies natales (‘birthday’) on March 1, the Equirria of March 14, the Mamuralia of March 15, the Agonium Martiale of March 17, and the Tubilustrium of March 23. In this last festival, departing armies were ritualistically cleansed for their upcoming battles. Mars was feted at all military occasions and victory celebrations. Spoils of war were also presented to him during celebratory military processions that wound their way through the streets of Rome.

The Romans would typically offer rams and bulls to Mars as sacrifices, or hostiae. On special occasions, Mars was honored with suovetaurilia—a triple offering of sacrificial pig, ram, and bull. He was also known to receive horse sacrifices, and was the only Roman deity to be so honored.

Mars has survived in the popular lexicon thanks to the various cultural elements that bear his name. The Romans bestowed his name upon the fourth planet from the sun—Mars. The great red planet aptly symbolized the god’s fiery passion. Mars was also the source of the name March, which in Latin was known as Martius. For many centuries, March was the first month of the Roman lunar year. This ended, however, with the calendrical reforms of the second century BCE, when it became the third month of the year (a position which it still holds).