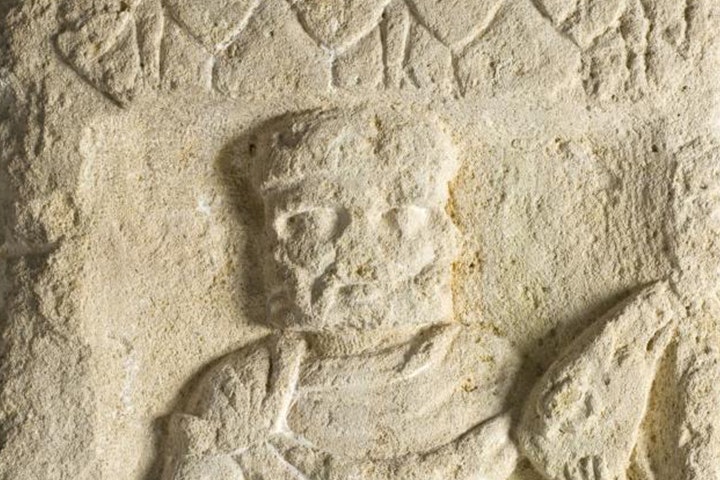 The Irish god of nobility, Lugh of the Long Arm was a master of crafts and a cunning warrior. He was both Ollamh Érenn and King of the Tuatha Dé Danann, and wielded the Spear of Assal, which none could stand against.

His dwellings were at Tara in County Meath, and at Moytura, in County Sligo. His holy day was Lughnasa, which fell on August 1st.

Lugh, sometimes spelled Lug, was a popular name in Ireland and throughout the Celtic world. Despite its popularity, its meaning has been the source of considerable debate. It has been suggested that the name stems from the Proto-Indo-European root lewgh-, meaning “to bind by oath.” This meaning would referencing Lugh’s role in regards to oaths and contracts. It has also been suggested that the name is connected to the word “light,” though modern scholars find this unlikely.

His titles were numerous, but the most famous was Lámfada, “Of the Long Arm,” a reference to the length of his spear in battle. Alternately, the title could be translated as “Artful Hands,” a reference to his skill in craftsmanship. He was Ildánach (the Skilled God), mac Ethleen/Ethnenn (son of Ethliu/Ethniu, his Fomorian mother) and mac Cien (son of Cian, his Tuatha Dé Danann father). He was also Macnia (the Youthful Warrior), Lonnbéimnech (the Fierce Striker), and Conmac (Son of the Hound).

Lugh was also the first Ollamh Érenn, or Chief Ollam of Ireland. This historic title reflected his skills as a poet, judge, and ruler; following Lugh’s death, the role became a ranked position in each of the Irish courts. While every kingdom had an ollam that served the chief or king, each of the High Kings of Ireland had their own Chief Ollam.

Lugh was a master of many talents. As the god of oaths, he held domain over rulers and nobility. He also served as the god of justice in its many forms; his judgement was often swift and without mercy. In what may seem like a contradiction, Lugh was also a trickster who was willing to lie, cheat, and steal to overcome his opponents.

As son of both the Tuatha Dé Danann and Fomorians, Lugh had a unique heritage. Such a background assisted him in inventing a number of notable Irish games, including horse-racing, sports, and fidchell, the Irish precursor to chess.

Lugh wielded a number of weapons and tools throughout his adventures, and was aided by several animal familiars. These weapons and familiars included:

Several locations were named for Lugh across Europe, but in Ireland specifically County Louth and its eponymous village bear his name, as does Loch Lugborta. Lugh had two dwellings: one at the place where he became king—Moytura in County Sligo—and a second at Tara, in County Meath. It was at Tara that the historical High Kings of Ireland were seated.

Lughasa (Lughnasadh), the Irish harvest festival, took place on August 1st and was celebrated across Ireland, Scotland, and the Isle of Man. This date was chosen because it marked Lugh’s victory over the spirits of Tír na nÓg. To celebrate his victory, Lugh blessed the early fruits of harvest and hosted games in memory of his foster-mother Tailtiu.

The holiday, which is still celebrated today, has various Christian names, including “Garland Sunday” or “Mountain Sunday,” as many celebrate by climbing hills or mountains. Lughnasa is also celebrated by many neo-pagan communities.

Lugh was descended from two bloodlines: his father, Cian, was the son of Dian Cedh, healer of the Tuatha Dé Danann; his mother, Ethniu, was the daughter of King Balor of the dreaded Fomorians.

While it is known that Lugh was fostered throughout his childhood, the identities of those who raised him remains somewhat contested. The Irish sea god Manannán mac Lir, Tailtiu, Queen of the Firbolg, and Gavida, god of the smiths, have all been proposed as potential foster parents.

Lugh had many wives, including Buí, Buach, and Nás. The latter, a daughter of a king of Britain, bore Lugh’s son Ibic. With the mortal Deichtine, Lugh had his most famous son: Cú Chulainn, the great hero of the Ulster saga.

One of the most prominent figures in Celtic mythology and folklore, Lugh was renowned as both a savior and a trickster, in equal measure.

Numerous legends exist regarding the birth of Lugh. Cath Maig Tuired described the marriage of Cian and Ethniu as a dynastic union between the invading Tuatha Dé Danann and the Formorians of Ireland. A later folktale differed, speaking of a prophecy that warned King Balor of the Fomorians would be slain by his grandson. As a precautionary measure, Balor hid his daughter Ethniu locked in a tower on Tory Island. Cian used the magic of a fairy woman named Biróg to transport himself into the tower, where he seduced Ethniu; she eventually gave birth to triplets. Upon discovering his daughter’s children, Balor ordered a servant to drown them. Two of the children died, but one of them fell into the harbor and was rescued by Biróg, who took him to his father. Cian fostered the surviving child, Lugh, and protected him.

After coming of age, Lugh arrived at Tara, the hall of Nuada, king of the Tuatha Dé Danann. Court policy required all who entered to offer a skill in service of the king. Though Lugh offered many skills, the doorkeeper told him that each role he sought had already been filled. Thinking quickly, Lugh asked if the court had a master of every skill, to which the doorkeeper replied they did not. Thus, Lugh was allowed to join the court of Nuada as Chief Ollam, master of all skills.

Sensing that Lugh could bring salvation to the Tuatha Dé Danann, Nuada put Lugh in charge of the coming war against the Fomorians. Before that war could proceed, however, the First Battle of Moytura took place against the Firbolg in County Galway. Nuada lost his hand during the battle, forcing him to step down as High King (in accordance with tribal tradition, a king could not be blemished). Nuada was succeeded by Bres, a half-Fomorian who delayed war against his kin.

#The Sons of Tuireann

Brian, Iucharba, and Iuchar there, the three gods of the Tuatha De Danann were slain at Mana over the bright sea by the hand of Lug son of Ethliu.
-Lebor Gabála Érenn

Meanwhile, Cian met his end at the hand of Tuireann, his great foe. Tuireann’s sons, Brian, Iuchar, and Iucharba, located Cian, who had transformed into a pig, and slaughtered him. Before the final blow was struck, however, Cian transformed back into his human form, granting the legal right to seek revenge to his heir. Twice the Sons of Tuireann attempted to bury Cian, and twice the ground spat him up. After the third burial, Lugh happened upon the grave and asked the ground who laid there; it replied that the grave belonged to his father. Devastated by his loss, Lugh began to plot his revenge.

He invited the sons of Tuireann to a grand feast, and asked them what they would require if their father was murdered. They replied that death was the only just response, and thus Lugh’s trap was sprung: he revealed he was Cian’s heir and thus demanded that same justice. As a god of games, he gave them a series of tasks, but they overcame each in turn. Seeing that the final task was impossible, Tuireann pleaded for mercy for his sons, but Lugh would not relent. The final task mortally wounded each, and, with Lugh withholding the magic pigskin that would have healed their wounds, the sons of Tuireann died. In his grief Tuireann died as well, bringing Lugh justice and victory over his father’s enemies.

For twenty-seven years, King Bres forced the Tuatha Dé Danann to pay tribute to the Fomorians and work as their slaves. Lugh’s grandfather and uncle first crafted a silver hand, then a hand of flesh for the former king Nuada; in doing so, they removed his blemish. Nuada retook the throne and Bres was subsequently exiled. Lugh finished planning for war by seeking the counsel of the Phantom Queen, the Morrígan. At last, he Tuatha Dé Danann declared war.

The two armies met at Moytura, in County Sligo, and Lugh fought fiercely using both Assal and his sling. His grandfather Balor found Nuada in the fighting, and beheaded him. Before Balor could claim victory, however, Lugh slung a stone at Balor’s eye. Balor fell dead, and with his death the tide turned. Soon the Fomorians were driven into the sea. Lugh was declared King of the Tuatha Dé Danann for his deeds. After the battle, Bres, who fought for the Fomorians, was brought before Lugh, where he begged for mercy. Lugh granted it, provided that Bres teach the Tuatha Dé Danann to plough the land in return. Seeing that he had little choice in the matter, Bres agreed.

At long last, Lugh reigned over a united Ireland.

The Tuatha Dé Danann never forgave Bres, and after learning to farm Lugh sought to finish him off. He crafted three hundred wooden cows and filled them with poisoned red milk, then offered the milk to Bres, who could not deny such a hospitable offer. The former king drank each pail without hesitation, and died shortly afterward.

Lugh met his own end after his wife Buach took Cermait, son of the Dagda, as a lover. Upon discovering this affair, Lugh had Cermait killed and washed his hands of the incident. Cermait’s three sons, however, were very much alive, and swore vengeance upon the king. After capturing Lugh, they drowned him in a lake, thus giving it the name Loch Lugborta. Lugh had ruled for forty years, and his death marked the beginning of the end for the Tuatha Dé Danann.

Following his death, Lugh dwelled in Tír na nÓg (“Land of the Young,” one of the names for the Celtic Otherworld), though he occasionally appeared in the mortal world. It was during one of these appearances that he sired Cú Chulainn, the great hero of Ulster. Lugh later appeared to his son during the Cattle Raid of Cooley, healing his wounds over a period of three days.

Lugh was one of the most prominent Celtic deities, appearing in Britain and the European mainland as Lugus, or in Wales as Llew Llaw Gyffes. Though he was primarily associated with skill and rulership, he was in some cases connected with light or the sun as well. His title “of the Long Arm” often accompanied him in his various appearances.

Julius Caesar identified Lugus as the Roman god Mercury, a trickster and messenger of the gods, similar to Lugh’s role before he became High King. He shared several attributes with the Norse deity Freyr, a fertility god with a boat that could change sizes. Freyr’s father was Njord, the Norse god of the sea, just as Lugh’s foster-father was Manannán mac Lir, the Celtic sea god.

Lugh remains prominent in popular culture, and has made appearances across a variety of media: