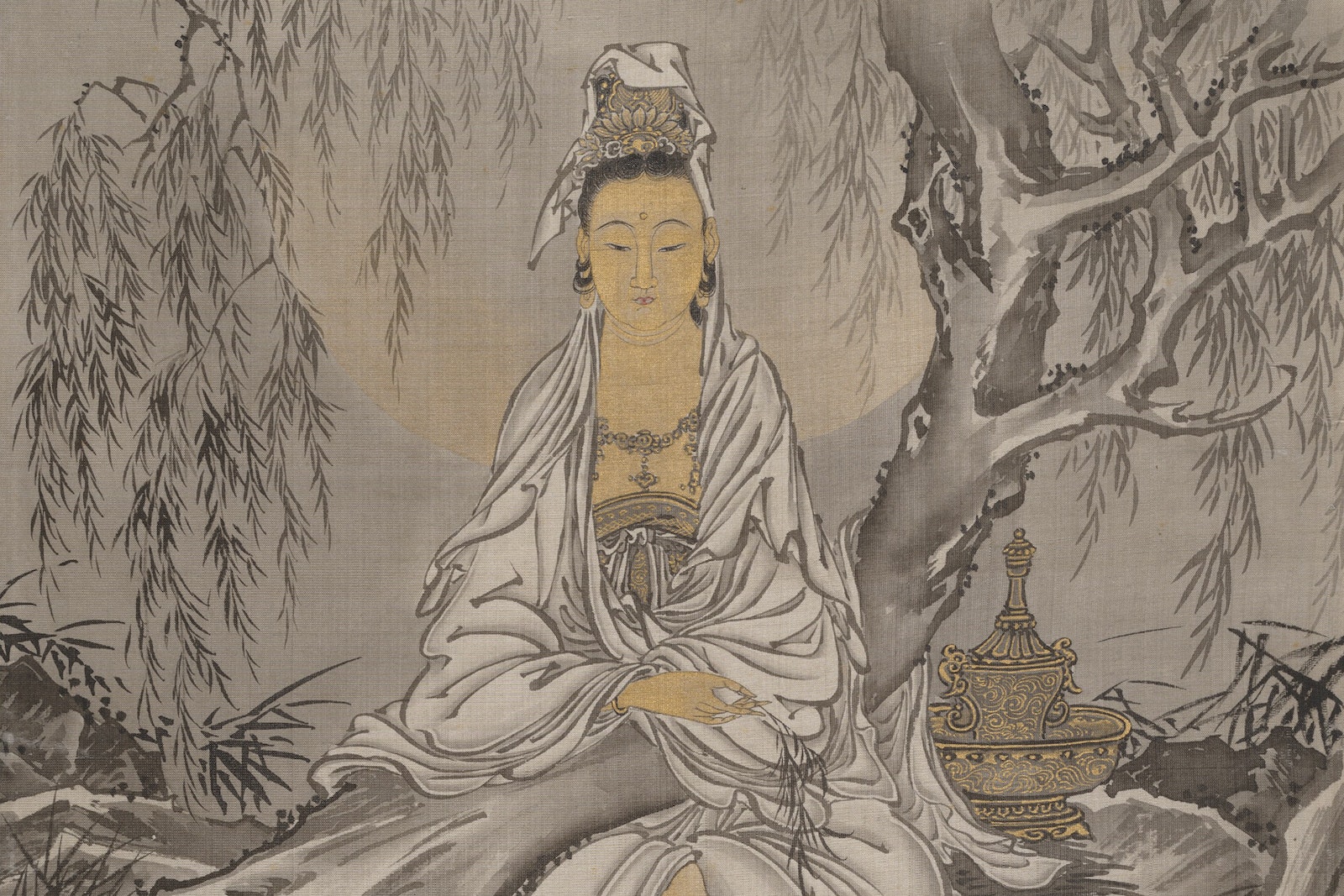 Kannon is the bodhisattva (a revered Buddhist figure on the path to enlightenment) of compassion and mercy, worshiped in Buddhism across Eastern and Southern Asia. In Japanese mythology she takes on divine features and is a popular deity, perhaps the most widely worshiped bodhisattva in Japan. Sendai Daikannon, a giant statue of Kannon located in Sendai, Japan, is among the largest statues in the world.

Kannon is the modern Japanese rendering of Guanyin, or 観音. Guanyin was originally Guanshiyin, which translated to “One who Perceives the Sounds of the World.” This is a direct rendering of Kannon’s original Indian name, Avalokiteśvara (अवलोकितेश्वर), or “One Who Perceives All.”

Based on previous pronunciations, Kannon has been rendered as Kwannon in English. Her full name in Japanese is 観音菩薩 (Kannon Bosatsu), 観世音菩薩 (Kanzeon Bosatsu), or 観自在菩薩 (Kanjizai Bosatsu), which mean “The Buddha Kannon.” When depicted with her nyoihoju jewel, she is known as Nyoirin Kannon, 如意輪 観音, or “Kannon, the One Who Wishes.” Other names include Senju Kannon (千手觀音, “Thousand-armed Kannon”), Juichimen Kannon (十一面観音, “Eleven-faced Kannon”), Sho Kannon (聖観音, sometimes 正観音, “holy or righteous Kannon”), and Bato Kannon (馬頭観音, “Horse-faced Kannon”).

Kannon is widely regarded as the most popular bodhisattva in Japan, worshiped as a goddess in some places but always as a Buddhist entity. Early European travelers to East Asia called her the “Goddess of Mercy” as they observed her in Southeast Asia and China.

Kannon is the bodhisattva of compassion and mercy, the keeper of peace and reliever of troubles. She can help women become pregnant, end droughts, and is associated with vegetarianism through her compassion. Many Japanese believe that anyone who cries out to Kannon with earnest, honest faith will feel her love and find salvation.

Kannon’s appearance varies across Asia, but in almost all contexts she is feminine. In Japan, she is commonly shown holding a magic jewel, a nyoihoju, on which she makes wishes for the world. At times she has a multi-armed form, holding many symbols of Buddhism, including weapons, and is depicted with as many as eleven heads, drawing on imagery of naga (mythical serpent beings).

In total, Kannon can take on thirty-three different forms, included a thousand-armed form and a horse-headed form, in which she protects pets in the afterlife. In the Lotus Sutra (one of the most influential sacred texts of Buddhism), she can take the form of any god or bodhisattva in India.

Though she manifests in different forms of Buddhism, her traits are fairly similar in each. Kannon provides compassion and mercy for those who believe in her, relieving the pain of those who need it and granting mercy and protection. In Shingon Buddhism, she is one of the Thirteen Buddhas. She is said to reside in Fudaraku, a mountainous island paradise from which she descends to welcome those who seek her salvation.

Many of Kannon’s stories came with her from Asia, while others originated in Japan after her arrival.

The Buddha told Inexhaustible Intention Bodhisattva, ‘Good man, if any of the limitless hundreds of thousands of myriads of kotis of living beings who are undergoing all kinds of sufferings hear of Guanshiyin Bodhisattva and recite his name single-mindedly, Guanshiyin Bodhisattva will immediately hear their voices and rescue them.’ -Lotus Sutra, Chapter 25.

Kannon first appears as Avalokitesvara, a male bodhisattva, described in the Lotus Sutra. It is not until he crosses the Himalayas that he becomes commonly depicted as the female Guanyin. Avalokitesvara is a compassionate bodhisattva, who answers all those who hear his cries and can take any form needed, regardless of divinity or sex. Avalokitesvara answers any prayers, protects people from harm such as fires, and grants salvation in his endless mercy.

Avalokitesvara’s attributes are also defined in the Kāraṇḍavyūha Sutra, which extols his virtues and mission.

Kannon arrived in Japan with Buddhism from Korea by at least the seventh century. As the Imperial Family began promoting Buddhism everywhere in Japan, Kannon, too, became widely known throughout the country. People have been making pilgrimages to Kannon’s temples and holy sites since at least the eleventh century; the classic Japanese text Tale of Genji, written then, mentions such pilgrimages.

Many Chinese tales of Guanyin made their way to Japan, describing how Guanyin/Kannon gave barren queens children or granted salvation to those who desperately needed it. One story describes how Kannon struggled with her inability to free all beings from the cycle of life and suffering. In response, Amida Buddha, a prominent figure in some branches of Buddhism, gave Kannon eleven heads and a thousand arms, with which she could see, hear, and perceive all things, helping her in her goal of saving all people. This explains why Kannon is sometimes pictured with multiple arms and heads.

In Japan, Kannon is associated with dragons and is sometimes seen riding one. It is said that a carp that makes its way up a waterfall transforms into a dragon; this symbolizes endless perseverance and Kannon’s compassion through numerous trials.

Some scholars name Kannon as a goddess, separate from Buddhism, but historically many Japanese have not been concerned with this differentiation.

Avalokitesvara is a popular figure in many forms of Buddhism, and Guanyin is one of the most commonly depicted bodhisattva in East Asia. Early Christian travelers noted a similarity between Guanyin and the Virgin Mary, to whom she was compared favorably. As in many parts of East Asia, Kannon was used by Christian missionaries to convert people to Catholicism, with Mary being called “Kannon Mary.”

Of all Buddhist figures in Japan, Kannon is one of the most commonly depicted. Countless artists and sculptors have made images of her. One of the most prominent is the Sendai Daikannon, a 330-foot tall statue in Sendai, Japan, showing her praying and holding a nyoihoju. The statue itself is also something of a temple, housing many statues of Buddha and other figures at its base.

One of the largest Buddhist temples in Japan, the Sanjusangen-do, part of the Tendai sect of Buddhism, is found in Kyoto and is dedicated to Kannon, with one of the largest statue collections of Kannon in the world. A popular tour in Japan, the Shokoku 88 Temple Pilgrimage, contains twenty-nine different temples to Kannon, and another tour in Kansai has thirty-three different sites dedicated to her.

The 18th day of each month is Kannon’s holy day.

Kannon, and Guanyin by extension, is one of the most commonly depicted figures in Buddhism and appears often in popular culture.