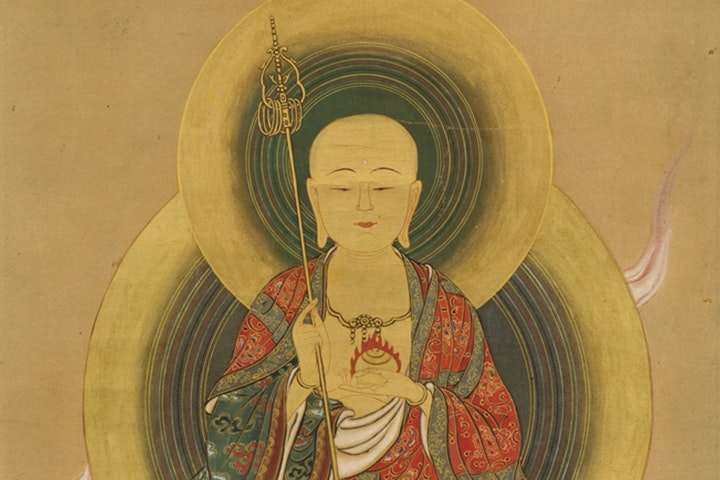 Jizo is an important bodhisattva (a revered Buddhist figure on the path to enlightenment) in Mahayana Buddhism, and a particularly important one to Japan. Seen as the protector of children and especially children who die before their parents, Jizo is the chief bodhisattva who leads their souls to the afterlife and then to reincarnation, an act of supreme compassion. He is known for his many statues in Japan.

Jizo (地蔵, “Earthen storehouse”), or Jizo Bosatsu (“the Buddha Jizo”) is a manifestation of Ksitigarbha, a bodhisattva whose name can be translated as “Earth Treasury” or “Earthen Store.” Jizo takes his name from the Korean Jijang, which is itself a version of the Chinese Dizang, which is in turn a rendering of the Sanskrit Ksitigarbha. While these names sound different, their meaning remains consistent in each language.

He is also known as Ojizo-sama (大地蔵様), or “Great Lord Jizo.”

Jizo is like many bodhisattva, compassionate and concerned with the souls of those who are still trapped in the cycle of life, death, and reincarnation. Where he is unique is in his vow not to reach Nirvana until the many hells of Buddhism are empty and every last soul reaches enlightenment. In this sense he is the protector of all souls on their journey through reincarnation.

If a person believes in Jizo and ends up in one of the hells, Jizo’s prayers can make a soul’s time there shorter. This means they spend less time suffering and can more quickly reach their next life, where they have another chance at achieving enlightenment and breaking the cycle of reincarnation. Because of this, Jizo is one of the four most important bodhisattva of Mahayana Buddhism.

In Japan, Jizo takes on another important role. Jizo is the master of unborn souls and children who die before reaching adulthood. Called mizuko, or “water children,” this group includes children who are stillborn, miscarried, or aborted, or who die before their parents for any reason.

In Japanese Buddhist lore, the dead must cross the River Sanzu (a mythical river believed to be in Aomori Prefecture), using six coins for passage, and have their life judged before they reincarnate. In traditional belief, however, people who die in childhood have not lived long enough to accumulate good or bad deeds, and thus cannot cross the river over the bridge.

This causes anxiety for many bereaved parents, and Jizo offers a solution. He stacks three rocks atop one another to confuse the demons, who mistake the rocks for a child and begin to eat them. While the demons are distracted, Jizo hides the “water children” in his robe and leads them across the river.

When a parent loses a child, in order to ease their passing, parents must undergo the rite of mizuko kuyo, which involves reading from various Buddhist sutra (scripture). This can be done multiple times depending on how much time has passed since the death. One popular way to undertake this ritual is to pay for a Jizo statue and be present when it is blessed.

Statues are the most common way Jizo is represented. Bald, smiling, and with the elongated ears typical of representations of enlightened souls, he appears as a somewhat typical Buddhist monk. He also carries a staff, has a cintamani (a “wishing stone” used to fulfill the wishes of the faithful), and sometimes hides children beneath his billowing cloak. Jizo uses the staff to force open the gates of hell and the wishing stone to fulfill the desires of his followers.

His cloak is sometimes simple in appearance, part of the rest of the statue, while other times it is painted red or made of actual cloth. Typically carved from stone, Jizo statues are found in virtually all cemeteries, roadsides, and temples across Japan. They are perhaps one of the most innocuous and well known symbols of Japanese spiritual life.

While Jizo statues are the most well-known depiction of Jizo, more traditional images favor his continental appearance, which is a monk with varyingly brown, yellow, or orange robes, which are wide and billowing and occasionally covered with sutra. He carries the staff and wishing stone in most images.

Given the prevalence of infant mortality in the pre-modern world, Jizo held a particularly important place in the Buddhist pantheon and in Japanese folk religion in earlier eras. While he is primarily associated with the deceased, Jizo is also considered an important patron to travelers, whom he helps reach their destinations. Even in modern Japan, travelers still pray to Jizo for blessings on their journeys.

There are many temples to Jizo specifically, but he is also an omnipresent bodhisattva in most Mahayana or Mahayana-descended temples. One of the most famous, or at least well used, is Jomyoin Temple, near Ueno Station, one of Japan’s most vital commuter stations. In China, his sacred mountain is Mount Jiuhua, a site of holy pilgrimage even in Japanese Buddhism.

Jizo is a storied bodhisattva whose tales came to Japan from China and beyond.

The Buddhist scripture called Kṣitigarbha Bodhisattva Pūrvapraṇidhāna Sūtra, the first known version of which is a 7th century Tang Chinese (618-907) translation of a supposed Sanskrit source, recounts a folk tale about one of Jizo’s human incarnations.

Called here only Sacred Girl, she was born into the Brahman class of India during the time of the Buddha of the Flower of Meditation and Enlightenment. Her mother was an irreverent woman, and upon her death, Sacred Girl became deeply troubled, for she was pious and knew that her mother would suffer long in her journey through the hells. She searched far and wide, praying and doing good deeds in the name of helping her mother, but the dread never left her.

When she consulted the Buddha of the Flower of Meditation and Enlightenment, she was told to go home and recite his name to know where her mother was. In doing so, Sacred Girl was transported to hell, where an attendant told her that due to her good deeds and prayers, her mother had already ascended to the heavens. She was relieved for her mother, but the horrible sights in hell compelled her to swear never to rest until all the souls there were freed.

Later, during the time of Emperor Ming of the Han Dynasty (28-75), as Buddhism was spreading across mainland Asia, a former prince of the Korean kingdom of Silla named Kim Gyo-gak arrived in China to seek out Buddhist teachings (dharma). He became a monk and changed his name to Jizo. He ascended Mount Jiuhua in Anhui Province, built a cabin, and began a life of Buddhist contemplation.

At some point after this he was bitten by a snake and, rather than kill it, chose to spare its life. A passing woman gave Jizo medicine, and he recovered, then spent the next several years locked in meditation. Some passing scholars found him there, his hair grown and his rice bowl empty, and took pity on him. Their leader, Chu-Ke, decided to build a temple dedicated to Jizo’s will and descended the mountain to seek out its owner. Elder Wen-Ke was wealthy and agreed to have a temple built on his mountain.

When asked how much land he would need for a temple, Jizo replied he would need land no greater than the size of his kasaya or cloak. Believing this to be too small, the scholars and Wen-Ke asked him what he meant, causing Jizo to throw his kasaya into the air. When it fell, it covered the entirety of the mountain, and so moved by this miracle was Wen-Ke that he gave the whole mountain to the monk and the scholars, vowing that he would become their protector; his son would later become a Buddhist monk himself.

The temples and shrines at Mount Jiuhua grew and grew under Jizo’s tutelage, until he passed at age 99, after seventy-five years on the mountain. Three years after his death, his body was inspected in his tomb, and there his followers found that his body was astonishingly well-preserved. This confirmed what they had thought: that Jizo had ascended to Nirvana, and that he had been an incarnation of Sacred Girl, also known by the Sanskrit name Ksitigarbha, who vowed to empty the hells of souls. This is why Jizo is also known as Ksitigarbha or local variants in China, Korea, and Japan.

Jizo features prominently in a popular tale told across Japan: New Year approached, and an old couple could not afford the traditional rice cake (mochi) meal eaten at that time. The old man decided to sell his hat (kasa) collection in town to afford the food, but found no success.

As he returned home, a blizzard overtook the road, and the old man noticed that none of the Jizo statues was properly covered. He covered all but one with his hats, and not having enough hats, covered the last with a towel. When he returned home and relayed to his wife what had happened, she praised his selflessness, and the two went to sleep.

During the night, the storm became loud and thunderous, and a loud banging outside woke the couple. They rose to see what was happening, only to discover a giant pile of treasures dedicated to Jizo on their front door; the Jizo statues, still wearing the hats and towel, waddled back to their places by the road, thankful for the selfless deed of the old man and the praise of his wife. The couple could at last afford mochi.

Each province in Japan has its own variation of this tale, with some changes to details such as geography, the number of statues involved, and the ways they are covered.

Jizo is a psychopomp, a being who helps the dead transition into the afterlife. Other famous psychopomps include the Greek Hermes, the Roman Mercury, the Norse Odin, the Egyptian Anubis and Osiris, and countless more.

Jizo, being a popular bodhisattva, appears in countless pieces of media, including: