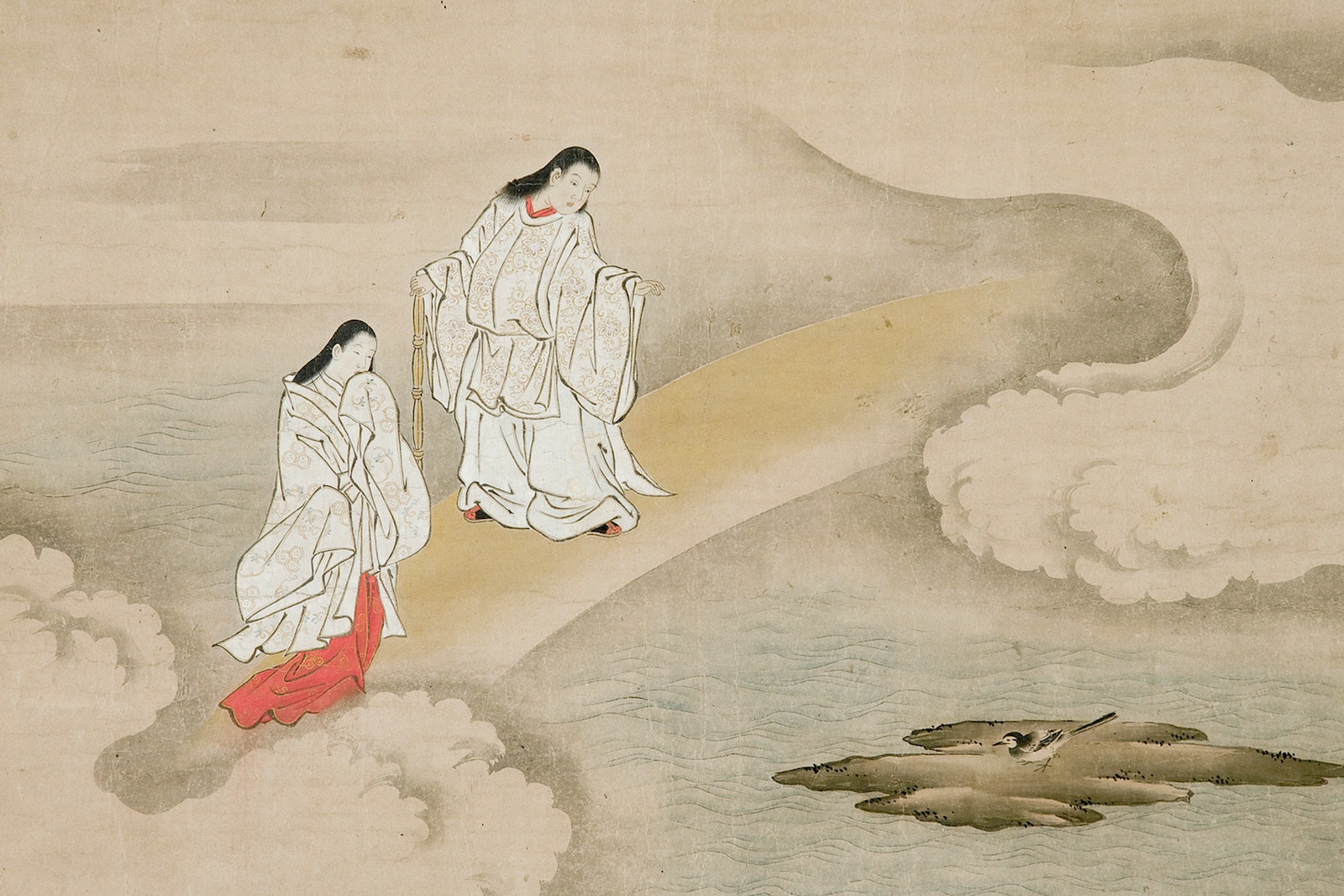 Izanagi is one of the divine creators who, together with his wife Izanami, created the islands of Japan. He is the father of countless kami and the bureaucracy of the heavens, over which his daughter, the sun goddess Amaterasu, presides.

Izanagi is considered the father of the Japanese pantheon and is sometimes portrayed as a creator deity. Though the latter is not entirely accurate, it is true he is the father of many kami. Izanagi also defends against the forces of Yomi, and ensures there are more births than deaths each day in order to preserve his creation. He often wields Ame-no-nuboko, the heavenly jeweled spear with which he churned the primordial seas.

He is the father of many Shinto rituals as well, including marriage and misogi (禊). The latter ritual is central to Shinto beliefs and uses water to wash away impurities, such as the death and rot Izanagi encountered while in the underworld.

As father to the chief gods of Heaven, Izanagi was the original ruler of Heaven and trained his daughter Amaterasu to take the throne. While he still maintains some authority, Izanagi has bequeathed most of his power to Amaterasu, who now serves as the true ruler of Heaven.

Izanagi and his sister-wife Izanami are the seventh generation of Kamiyonanayo and the children of Omodaru and Kashiko-ne. Together with Izanami, Izanagi drew the islands of Japan from the sea; in this way, the two deities effectively gave birth to the islands, which in turn are considered to be their children. The islands in this creation myth are generally thought to be Kyushu, Shikoku, and Honshu, as well as the smaller islands that surround them. Izanagi then fathered the first great generation of kami, culminating in the birth of the fire god Kagutsuchi, who killed Izanami.

As he purified himself in the wake of this tragedy, Izanagi fathered Amaterasu, Tsukuyomi, and Susanoo, the three most important gods in the Japanese pantheon. Through Amaterasu, he is an ancestor of the Japanese Imperial family.

The tale of Izanagi is central to the Kuniumi, the origins of Japan told in many traditions.

Birth of Japan and the Kami

From the void came Heaven and Earth. In the beginning, however, only Heaven was populated. Seeing that Earth was untouched, the primordial deities gave their blessings to Izanagi and Izanami to fill it with life (in the Nihon Shiki, they volunteered). Standing at the pillars of heaven, the siblings used the spear Ame-no-nuboko to churn the sea, and from this churning came the first islands of Japan. In the wake of this achievement, the two saw their bodies complemented one another, and Izanagi proposed to Izanami so they might procreate. Izanami agreed, and the two began to prepare for the marriage ceremony.

Izanagi: How has your body been made?
Izanami: My body is fully formed, except for a part which has not quite grown.
Izanagi: My body is fully formed, except I have a part that has grown too much. If I place the part of my body that has grown too much, and plug the part of your body not yet grown, we will procreate lands and dominions. What say you to this?
Translated from Kojiki

Izanagi and Izanami performed the first marriage ceremony by walking around the pillars of heaven and meeting in the center. In the initial ceremony, Izanami spoke first; this was out of line, however, and caused the marriage to be improperly sealed. The children born of this union were illegitimate and deformed as a result. They performed the marriage ceremony once more, this time with Izanagi speaking first. With their marriage sealed properly this time, Izanagi and Izanami gave birth to the remaining Japanese islands as well as a host of gods - the first legitimate kami.

Despite this temporary happiness, the marriage would soon end in sorrow. The final god to be born of Izanami was the fire god Kagutsuchi, whose flames enveloped and killed his mother. Following this tragedy, a grieving Izanagi killed the child and fell into mourning.

The Descent to Yomi

In despair, Izanagi set out for Yomi-no-Kuni, the Land of the Dead. This land was defiled and impure, full of oni and other monsters. Once there, Izanagi found a seemingly normal Izanami; when he shone a light upon her, however, he discovered that she was little more than rotting flesh, full of demons writhing like maggots. He learned she had partaken of the food of Yomi, and as such was bound to remain there for all eternity. Filled with dread, Izanagi fled from her, but Izanami pursued, sending a host of demons to catch him and inflict suffering upon the world.

Knowing Izanami would devour the world if she escaped Yomi, Izanagi placed a giant boulder at the mouth of the underworld in order to prevent her return. Furious, Izanami cursed the world, saying she would kill a thousand people each day. Izanagi responded by vowing one thousand five hundred people would be born each day. Though this action, Izanagi was able to protect creation and keep the land of the living plentiful.

The Birth of the Heavenly Rulers

Covered in the impurity of death, Izanagi found his way to a nearby hot spring and cleaned himself. Moving deliberately, he cleaned his left eye, right eye, and nose with water. With each feature he cleaned, he begat kami different from those he had fathered before. These radiant, beautiful kami were Amaterasu, the sun goddess, Tsukuyomi, the moon god, and Susanoo, the storm god. Izanagi declared that each should be a ruler of the Heavens.

Following this decree, Izanagi founded the celestial bureaucracy of kami, with Amaterasu and her brothers at its head. Any disrespectful kami felt his wrath, including Tsukuyomi and Susanoo, who were subsequently banished. Amaterasu, however, came to rule in her own right and remains in power to this day; Izanagi, meanwhile, serves as her adviser.

Scholars have noted that the tale of Izanagi and Izanami in Yomi is very similar to the Greek tale of Orpheus and Eurydice, though Izanami's eating of the food of Yomi and her subsequent damnation are elements more akin to the myth of Hades and Persephone. As a ruler of Heaven, Izanagi has many similarities to other East Asian divine creators and first emperors. He differs from them, however, in both his abdication of the throne and his seeming immortality.

Izanagi's tale is well-known, and he appears often in popular culture: