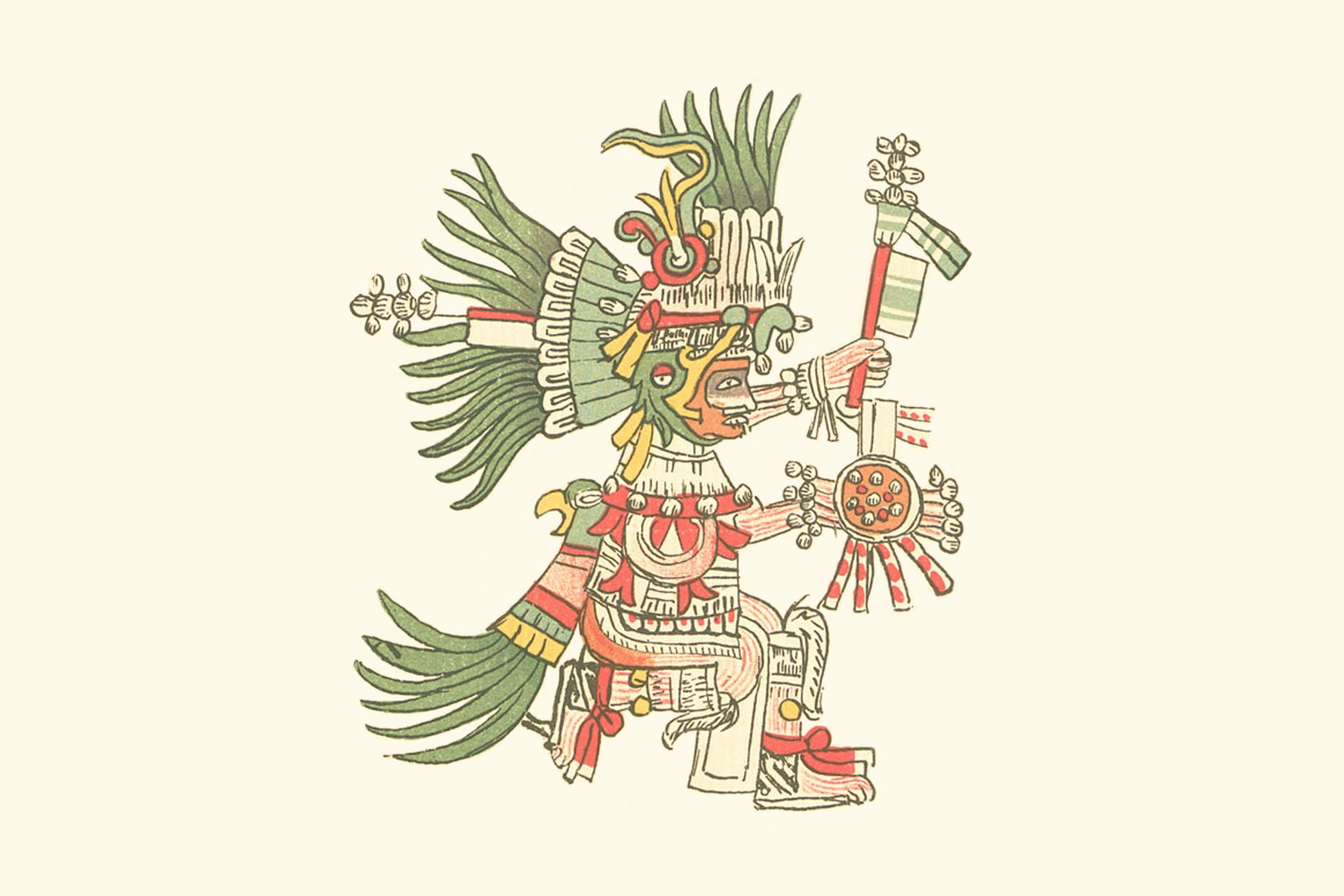 The famed Aztec god of war, Huītzilōpōchtli (pronounced Weet-zee-lo-pocht’-lee) was the patron god of the Mexica people and a key figure in the creation of the Aztec cosmogony. Huitzilopochtli led the Aztec people to Tenochtitlan, a fact that was not easily forgotten: half of the city’s Templo Mayor was dedicated to him.

Fallen warriors and women who died in childbirth were thought to become a part of his retinue. After accompanying Huitzilopochtli for a period of four years, the fallen warriors would be reborn as hummingbirds.

Translated literally, Huītzilōpōchtli’s name meant “Hummingbird’s Left,” or “Hummingbird on the Left.” For a while, scholars suggested this should be taken to mean “left-handed hummingbird.” Most modern scholars disputed this translation, however, noting that in Aztec cartographic tradition south was depicted to the left. As hummingbirds were thought to be reincarnated warriors, the implied meaning of the name was adjusted to “Reincarnated Warrior God from the South.”

Befitting his status as a god of war, Huitzilopochtli was believed to be an immensely powerful warrior. He wielded a shield, war darts, and Xiuhcoatl (a lightning-like fire serpent) as a spear. Despite his awesome martial prowess, the Aztecs believed that Huitzilopochtli could be defeated. Legends held that the god of war would one day meet his match, and that his fall would mark the end of the Aztec empire.1

As with many Aztec gods, Huitzilopochtli had multiple origin stories. All of these origins were equally valid, as Aztec mythology had neither required hierarchies nor rigid family structures.2

The first story featured the dual creator gods Ometecuhtli and Omecihuatl as Huitzilopochtli’s father and mother, respectively. In this telling, Huitzilopochtli was the final of their four children. His older brothers included Xipe Totec (god of agriculture, rebirth, and goldsmiths), Tezcatlipoca (omnipresent god of the night sky and knower of all thoughts), and Quetzalcoatl (god of the wind, giver of maize, and inventor of books and calendars).

In the second story, Huitzilopochtli was born to Coatlicue, a primordial earth goddess. He was conceived when his mother put a ball of hummingbird feathers underneath her breasts. As hummingbirds represented reincarnated warriors, the implication was that Huitzilopochtli had been sired by an anonymous warrior. This was how Coatlicue’s 400 other children took the news. Offended by the nature of their mother’s pregnancy they either killed her, attempted to kill her, or attempted to kill the unborn Huitzilopochtli, depending on the version of the myth being told. In any case, a fully armed Huitzilopochtli then emerged from the womb and swiftly defeated his attacking siblings.

Huitzilopochtli played many roles within the Aztec pantheon. He led the Mexica people to Tenochtitlan, the eventual seat of power of the Aztec Empire, and was venerated as the primary god of war. Sacrifices were made to him after every victory and defeat, and the dawn of creation even paused and waited for his arrival. It was foretold that Huitzilopochtli would eventually be defeated, and that the Aztec Empire would fall with him.

While Huitzilopochtli was an undeniably significant deity within Aztec mythology, some scholars have argued that the Spanish attributed greater significance to him than the Aztecs ever did. Bernardino de Sahagun’s seminal text, Historia general de las cosas de la Nueva España, drew parallels between the Aztec gods and their ancient Mediterranean counterparts, playing up certain gods that better fit European archetypes.3 Huitzilopochtli’s virgin birth, in addition to his position as god of war (akin to Mars), set him up perfectly to be received by Europeans as a god of preeminent importance.4

The earliest origin myth of Huitzilopochtli placed him as the fourth and final son of Ometecuhtli and Omecihuatl. Huitzilopochtli “was born without flesh (nacio sin carne), but only bones,” and remained fleshless for 600 years.5 After those 600 years had passed, Huitzilopochtli and his brothers began the process of creating the world and its laws.

The second origin myth for Huitzilopochtli resembled Jesus’ conception. It is unclear how many of these parallels were coincidental and how many were the direct result of the Spanish grafting Christianity onto Aztec mythology.

The story began with the Mexica people departing their ancestral home of Aztlan in search of a prophesied city that would become the seat of a great empire. Their exodus from Aztlan and subsequent journeying took many years. Periodically, the Mexica would stop to erect temples to Huitzilopochtli in the hopes that he would guide them.

According to the Codex Ramirez, during a stopover near a place called Coatepec (Serpent Hill) “Quatlique [the goddess Coatlicue] who was a virgin, took a small quantity of white feathers and placed them in her bosom, from which she conceived without having known man, and there was born of her Vchilogos [an alternative name for Huitzilopochtli].”6 Outraged by the nature of her mother’s pregnancy, Coyolxauhqui led 400 of her brothers in an attack on Coatlicue. In the midst of this attack, Huitzilopochtli emerged from his mother’s womb “in full war regalia” and destroyed his brothers and sisters.7

Prior to the founding of Tenochtitlan, the Aztec people lived in the city from which they derived their name: Aztlan. Around 1064CE, the Aztecs left Aztlan, perhaps prompted by the supernova that created the Crab Nebula. For the next 270 years, the Aztec people were semi-nomadic, settling down from time to time before ultimately moving along. In 1325 they came to a lake where an eagle was eating a snake while perched atop a cactus. This was a sign that had been prophesied by Huitzilopochtli and identified Tenochtitlan as the place that would become the seat of the Aztec empire.

Some have argued that the foundation myth of Tenochtitlan offered insight into Huitzilopochtli’s status as newer member of the Aztec pantheon. Read and Gonzalez noted that “one tale first describes him as an image carried in a bundle on the back of the early Mexica ancestors wandering the land. This bundle looked like the bundle dead rulers were wrapped into...this person may have been a chief named for the god, or a great chief who later died and became the god.”8

The Templo Mayor erected at the center of Tenochtitlan was dedicated to both Huitzilopochtli and Tlaloc, the god of rain. Read and Gonzalez took this shared temple space as another indication of Huitzilopochtli’s relatively recent origin amongst the Aztec gods. The temple served as Huitzilopochtli’s central sacrificial altar, and rituals involving ceremonial sculptures and human sacrifice were generally conducted on site.

#The Fall of Huitzilopochtli and the Aztec Empire

The Aztecs attributed much of their dominance in central Mexico to Huitzilopochtli. It was his guidance that instructed them to leave Aztlan and his prophecy that directed them to Tenochtitlan. As the Aztec god of war, Huitzilopochtli was instrumental in their conquest of neighboring groups. While the Aztecs believed Huitzilopochtli to be quite powerful, they did not consider him to be invincible. They acknowledged that the god of war would eventually fall. Huitzilopochtli’s fall would in turn bring about the end of the Aztec Empire.

During Moctezuma I’s reign, one of Huitzilopochtli’s temples burned down. The fire was “uncontrollable...throwing water on the flames only made them worse.”9 This incident was taken as an evil omen and a sign of things to come. These predictions would be proven correct during the reign of Moctezuma II. The first Spanish attack against the Aztec came when the conquistador Pedro de Alvarado attacked the city of Tenochtitlan during Toxcatl, a day of feasting dedicated to Huitzilopochtli.

Huitzilopochtli makes an appearance in the trading card game Vampire: The Eternal Struggle as—somewhat unsurprisingly—a vampire. In the game’s lore, Huitzilopochtli “used the… Aztecs as tools to drive out the werebeasts that inhabited the lands.”