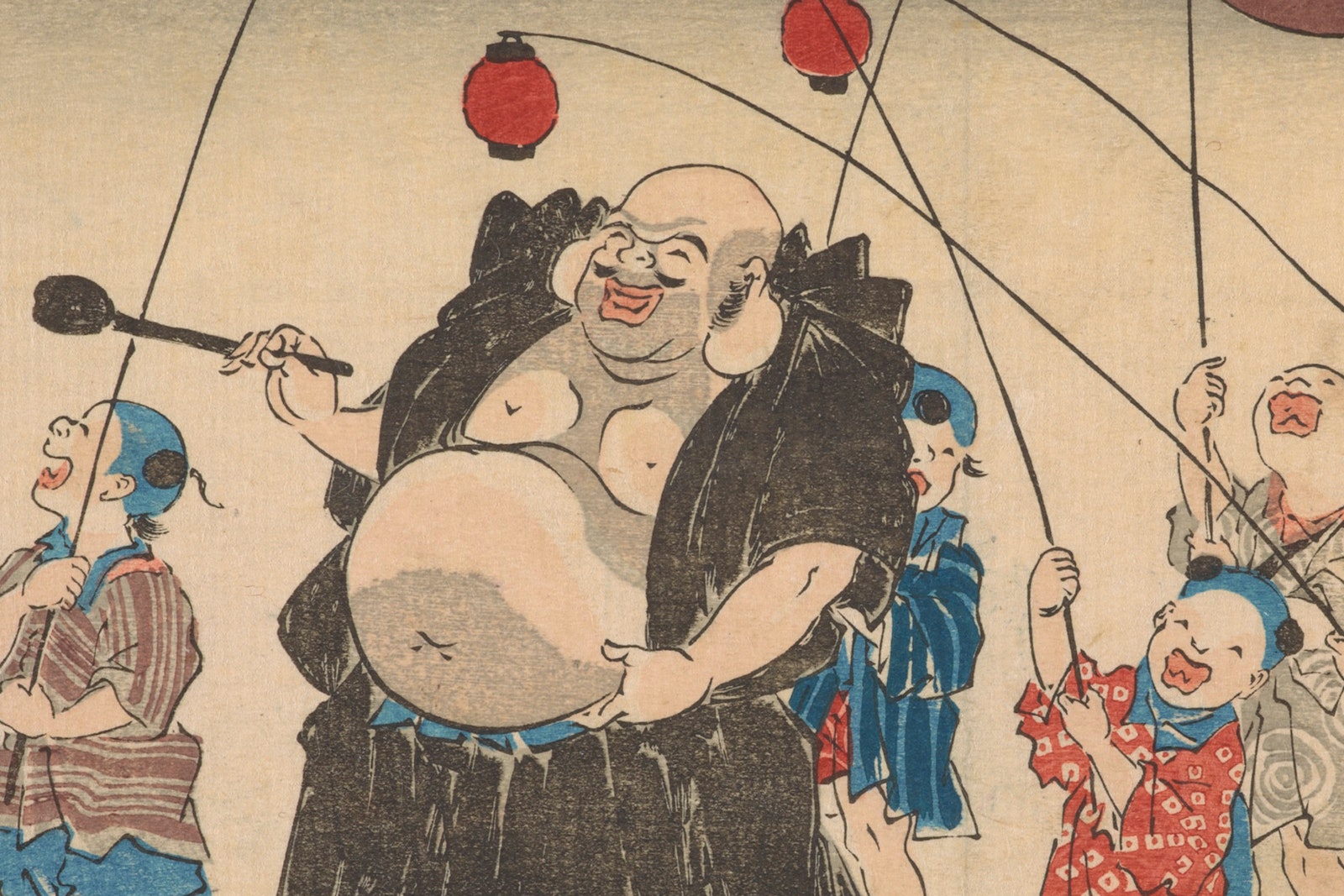 Hotei is a bodhisattva (a revered Buddhist figure on the path to enlightenment) and god of Japan, one of the Seven Lucky Gods. Many people in the West conflate him with the Buddha, making him one of the most well-known Buddhist images outside of Asia, although few Westerners recognize his name.

Hotei (布袋) can be translated directly as “linen sack.” He is also known as Budai, another reading of these same Kanji, in part because Budai is his name in China. These are transliterations of his mainland Asian names, which include Pu-Tai.

He is better known in some parts of the world as the “Laughing Buddha” or “Smiling Monk.”

The figure of Hotei emerged from a combination of folk beliefs and Buddhist practice, primarily Zen and the larger sect of Mahayana Buddhism. While many of these folk beliefs originated in China, they spread with Buddhism across China and into Korea, Vietnam, and Japan. A rotund figure, Hotei’s mouth is either smiling or opened for a laugh, leading many people to know him as the “Laughing Buddha.”

A wanderer in life and death, Hotei is always dressed simply and carries his namesake linen sack, a magical bag full of treasures he hands out readily, giving fortune and blessings to his worshipers and others he meets. He is favored by children, protecting them and leading them through darkness. Such is his compassion that some artworks depict him carrying demons across rivers to protect them.

Hotei is considered one of the Seven Lucky Gods of Japan, a set of deities who travel Japan throughout the year and come together to bless the New Year. Hotei is perhaps the most well known member of the group through his sculptures, which are spread throughout Japan.

Prominent in Zen Buddhism, Hotei has been a popular folk figure. He is based on a Chinese Buddhist monk called Budai, who is also believed to be an incarnation of Maitreya, the Buddha of the Future who will bring the pure dharma (Buddhist teachings) back to the world. Hotei’s popularity in Japan explains Maitreya’s importance in Japanese Buddhist thought.

Hotei has a long and storied history across East Asia.

#The Path of Budai

Beginning life as a Buddhist monk in China, Budai lived simply and provided for many through his treasures, despite having only a simple linen cloth to his name. Such was his enlightenment that the elements did not harm him, and he could sleep outside without trouble. Able to predict the future of townsfolk and of nature itself, he was content in life and gave abundantly before passing away sometime before the tenth century. A letter found suggested he was Maitreya, the Buddha of the Future, explaining his ability to see the future and provide abundance, as well as his willingness to live simply.

From there, Budai became associated with simplicity and contentment as well as fortune and blessings, making him popular with poor and rich alike. As stories of Budai traveled through China, he became associated with many local myths and attributes, and these spread as his worship grew. Several hundred years later, in the 13th century, Zen Buddhism (called “Chan” in mainland Asia) arrived in Japan, where Budai became Hotei.

It was not long before Hotei became a regular part of Japanese religious life, worshiped as one of the Seven Gods of Fortune and as a prominent Buddha, particularly in Zen sects. Though Japan began to demonize Buddhism in the 1870s, the sheer popularity of Hotei and his prominence as one of the Seven Lucky Gods was such that when American and British missionaries and scholars brought back symbols of Japanese art to the West, it was Hotei who represented all of Buddhism. This led to the image of the fat, laughing Buddha becoming an incredibly popular figure in American “oriental” thought and Western Buddhism.

Hotei is often incorrectly conflated with Siddhartha Gautama, the Buddha himself, though this happens only in the Americas and Europe. Asian worshipers understand the difference between the “Laughing Buddha” and the Buddha himself. Hotei is also conflated with the Indian figure Angida, a mystical snake-catcher who is also an arhat (a figure recognized in some Buddhist traditions as being on the path to Buddhahood), as well as with the Buddhist monk Phra Sangkajai, a prominent Thai folk figure.

Hotei’s popularity means that he appears often in popular culture, including:

Hotei appears in Yo-Kai Watch! as one of the Seven Lucky Gods.