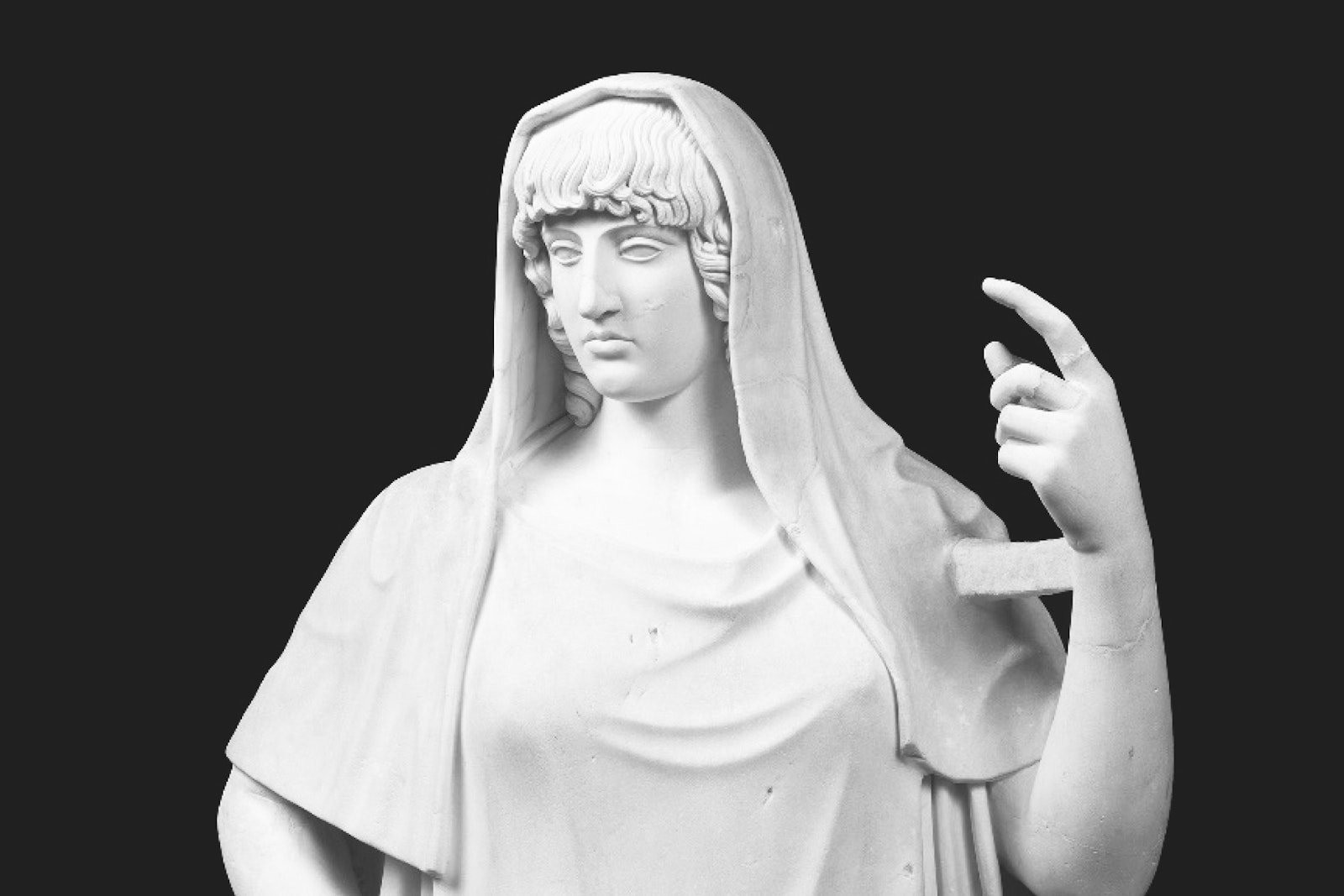 Goddess of home and hearth, protector of families and children, and overseer of domestic order, Hestia was sometimes (though not always) included among the twelve chief Olympian deities. As the ultimate matron, she symbolized the household put in its proper order. Dutiful observance of Hestia was vital to every Greek household, as private morality was linked to public prosperity.

The Greek word hestia means “hearth” or “fireplace.” As the central meeting place within the house, as well as the location of the sacrifices made in Hestia’s honor, the hearth was an apt symbol for the domestic goddess.

The etymology of the word hestia remains somewhat obscure. Some have traced it to the Proto-Indo-European roots *wes (“burn”) and *h₂wes- (“dwell, pass the night, stay”).1 Others have suggested connections between Hestia’s name and other words for “hearth,” including eschara in Greek and jestěja in Slavic, but these derivations are not generally accepted today.2 According to Robert S. P. Beekes, the etymology of Hestia is most likely pre-Greek.3

It should be noted that the name “Vesta,” the virginal Roman goddess who served as Hestia’s mythological counterpart, is derived from the same etymological root.

Hestia was not showered with as many epithets as the other Olympian gods. The Homeric epics, probably the best source for poetic epithets in Greek literature, do not contain any references to the goddess Hestia (and so obviously do not give us any epithets for her). In some later sources, Hestia did have a handful of epithets, among them basileia (“queen”), chloomorphos (“verdant”), and aidios (“eternal”).

Hestia was the goddess of the hearth and household. Revered in both the private and public spheres, she was symbolized in the hearth of each individual household but also at the community hearth located in the prytaneum, a public building found at the center of each Greek polis.

Hestia was usually represented as a modestly veiled woman wearing a long robe. In art, she was sometimes shown holding a flowering branch or a kettle. Her chief attribute was the hearth or hearth fire for which she was named. In fact, she often appeared in these forms rather than as a human.

Hestia was the firstborn child of the Titans Cronus and Rhea, rulers of the cosmos before the Olympians; her siblings included Demeter, Hera, Hades, Poseidon, and Zeus.4 Hestia was not only the eldest child but also the first to be swallowed by the tyrannical Cronus, who was convinced that his children would overthrow him. When Zeus forced his father to regurgitate his brothers and sisters, Hestia was the last to emerge, making her both the first to be born and the last to be reborn. As she was a virgin goddess, Hestia had no children.

Details about Hestia are scarce, making her personality, chief attributes, and mythology difficult to determine. The Homeric Hymns, religious poems written in honor of the Greek gods between the seventh and sixth centuries BCE, give us only a fleeting impression of the goddess. The twenty-fourth Hymn, for example, addresses Hestia as “you who tend the holy house of the lord Apollo, the Far-shooter at goodly Pytho, with soft oil dripping ever from your locks.”5 In the twenty-ninth Hymn, Hestia is said to reside “in the high dwellings of all, both deathless gods and men who walk on earth.”6

A somewhat more substantial story is found in the fifth Homeric Hymn, which is dedicated to Aphrodite. Here, Hestia, a chaste virgin, is contrasted to Aphrodite, the promiscuous goddess of love and sexual pleasure. In short, Hestia becomes a kind of anti-Aphrodite. So committed was the goddess of the hearth to her virginity, in fact, that she once rejected two of the most eligible suitors in the cosmos, Poseidon and Apollo, when they came to ask for her hand in marriage:

Nor yet does the pure maiden Hestia love Aphrodite's works... a queenly maid whom both Poseidon and Apollo sought to wed. But she was wholly unwilling, nay, stubbornly refused; and touching the head of father Zeus who holds the aegis, she, that fair goddess, sware a great oath which has in truth been fulfilled, that she would be a maiden all her days.7

Zeus himself swore that his sister Hestia would always be allowed to remain a virgin (in many traditions, Zeus makes the same promise to his daughter Artemis).

Another tale told by Ovid in the first century CE has Hestia’s virginity threatened by a minor rustic fertility god named Priapus. Shortly after the Olympians’ victory over the Titans, Gaia (the mother goddess of earth) hosted a celebration for the victorious deities. Uninterested in such revelry, Hestia wandered away from the festivities and fell asleep in the woods.

A drunk Priapus, who was known for his sexual appetite, soon came upon Hestia and was about to ravish her when a braying donkey woke the sleeping goddess. When the other Olympians arrived on the scene, they berated the besotted Priapus and forbade him from ever joining in their celebrations again. Hestia maintained her prized virginity, and Priapus was sent off to cavort with satyrs in the wilderness until the end of time.8

Hestia and the Olympians

The most modest, tranquil, and industrious of the gods, Hestia rarely appeared in the ribald and raucous stories typical of Greek mythology. Instead, she dutifully observed her role in the domestic sphere.

Some scholars doubt whether Hestia even belonged to the official pantheon of the Twelve Olympians, as she and Dionysus often exchanged the honor of filling the twelfth slot. On the east frieze of the Parthenon, a huge temple of Athena on the Athenian Acropolis, Dionysus is depicted among the Olympians, while Hestia is nowhere to be found. On the other hand, the altar of the Twelve Olympians—also, incidentally, in the city of Athens—included Hestia but not Dionysus.

For some, Dionysus’ presence among the Twelve Olympians is yet another sign of Hestia’s peaceful and generous nature: she may have given up her seat to the younger Dionysus in order to prevent conflict among the gods. It should be noted, however, that no such myth existed in antiquity (as far as we can tell)—it is a modern fiction posing as an ancient one. It remains unclear how the ancients coped with the rival claims of two different gods for the title of twelfth Olympian.9

Hestia and the Greeks

Hestia’s domesticity tells us much about what was expected of Greek mothers as the matrons of the household. Classical Greece was a deeply patriarchal society, where only men enjoyed the benefits of public life in the polis. Women, in contrast, were deprived of these rights and privileges and instead confined to the domestic sphere. Dutiful, obedient, and inconspicuous, Hestia embodied the Greek ideals of motherhood and womanhood.

Though rarely remembered today, the cult of Hestia thrived in its time. Hestia was the first to be addressed in every prayer and received the first share of every sacrifice.10 In the domestic sphere, her worship was centered around the hearth, itself the focal point of each home.

In the public sphere, Hestia was honored in community buildings such as the prytaneum. Every Greek city had a prytaneum, which housed the community hearth of Hestia and her cult statue. The structure was used for sacrifices to the goddess but also for various official functions, such as housing guests and ambassadors. Hestia also had a hearth in each city’s Boule, the City Council.

Whether in a private household or a public building, Hestia’s hearth guaranteed protection and was often used as asylum by suppliants.

Because every hearth was effectively a sanctuary of Hestia, there were few separate temples dedicated to her in the Greek world. One exception was the city of Hermione, which did have a temple of Hestia; however, it was unusual in that it contained no cult image or statue of her.11 Interestingly, this was not true of Hestia’s Roman equivalent, Vesta, who had a very important temple in the heart of Rome.

Hestia was commonly associated with the “eternal flame,” a sacred fire that burned for her and was never allowed to be extinguished. Whenever a Greek city founded a colony, the settlers would bring fire from their mother city’s eternal flame to burn in their new settlement. The Romans also observed this practice in connection with their goddess Vesta.

Hestia was sometimes also celebrated and invoked with sacrifices of various foods and animals, such as young cows.

Hestia has been featured in several pop culture depictions of Greek mythology. In the Percy Jackson and the Olympians series, she appears as a humble and dutiful goddess who is above the petty politics of the other deities. In the Xena and Hercules television series, her likeness appears in the Cave of Hestia, though she herself does not. In the same series, a religious group known as the Hestian Virgins appears regularly.