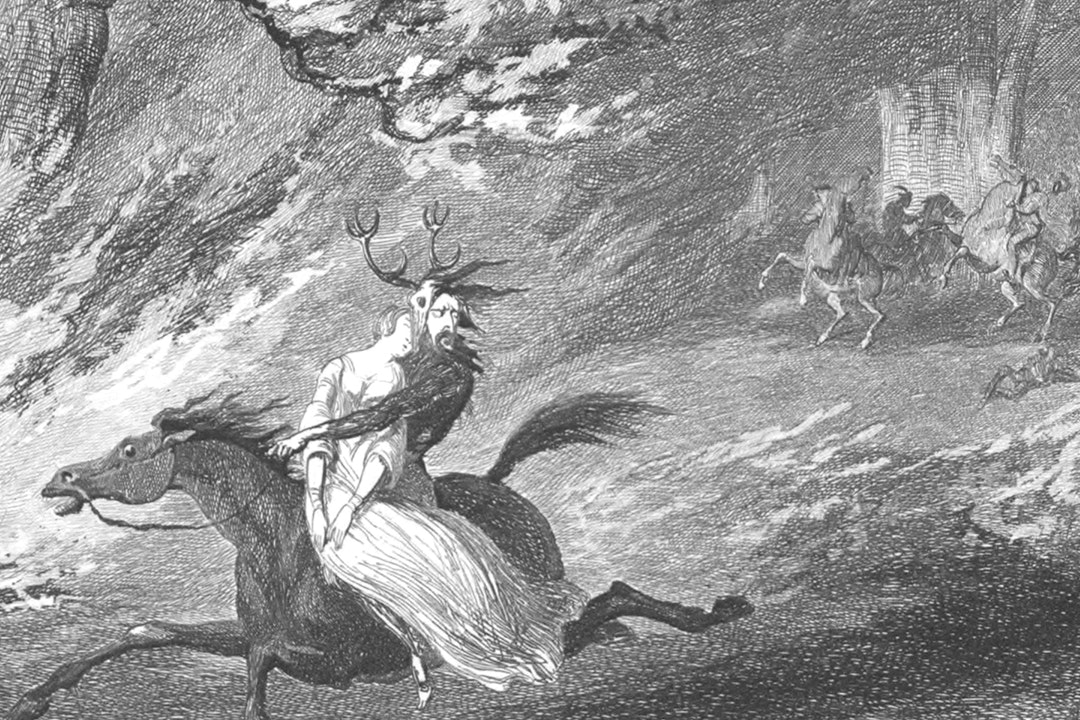 Herne the Hunter was a great English ghost who haunts the Berkshire woods and countryside. Rattling chains and tormenting animals, he was marked by the antlers upon his head and his mighty steed. Herne’s first recorded appearance was in William Shakespeare’s The Merry Wives of Windsor, though his historical origins remain open to speculation.

The origins of the name Herne have remained as shrouded in mystery as the specter himself. It has been suggested that “Herne” was linked to the Gaulish deity Cernunnos, whose own name stemmed form the Latin cerne, or “horned.” Through Grimm’s Law, cerne could have become herne, and thus mean “horned.” Alternately, “Herne” could be a corruption of Hernian, a title born by Wotan, the Germanic god of the Wild Hunt.

Another theory suggested that Herne was, in fact, a real person whose name was changed by Shakespeare. Herne appeared as “Horne” in several early drafts of The Merry Wives of Windsor, possibly referencing a historical yeoman of Henry VIII’s time.

Herne was a specter that haunted Windsor Forest of Berkshire—now called Windsor Great Park. He haunted a particular tree, called Herne’s Oak, and terrorized the wildlife that inhabited the wood. He was known by the rattling of chains and the ghostly moans that preceded him, as well as the giant antlers upon his head. Several interpretations have depicted Herne wearing a deerskin hood, upon which the antlers sat. In his original Shakespearean appearance, however, Herne’s antlers sprouted directly from his head.

Herne’s ghostly powers revolved around the decay of the natural world. He could cause a tree to wither and die with a single touch, and could bewitch cattle into producing blood instead of milk. In later legends, he possessed a horn and was accompanied by hounds. Sightings of Herne were believed to be evil omens that portended national disasters and significant deaths.

The character of Herne remains shrouded in mystery, in part due to his appearances rarely involving interaction. Herne was a notably cruel figure, possibly as a result of his death by suicide. His terrorizing of animals may have been related to this great shame—later legends cast him as a poacher in the king’s wood during the time of Henry VIII.

The identity of Herne’s Oak at Windsor Great Park has been a matter of great debate for centuries. Several trees have been identified, though most of them no longer stand or have been replaced. The tree currently designated as Herne’s Oak was planted in 1906.

Herne the Hunter has taken on a life of his own since he first appeared Shakespeare’s works. While his origins remain murky, his modern mythos has become quite robust.

It is unknown how much of Herne’s story predated The Merry Wives of Windsor. It seems likely that Berkshire had tales of spirits lurking in their woods; this would have been a common trope dating back to antiquity. Without a written record, however, it is impossible to know what tales existed before Shakespeare wrote his play. Much of Herne’s history has been extrapolated by scholars and writers after the fact, and the verisimilitude of such extrapolation remains unclear.

The Merry Wives of Windsor

Sometime a keeper here in Windsor Forest,
Doth all the winter-time, at still midnight,
Walk round about an oak, with great ragg’d horns;
And there he blasts the tree, and takes the cattle,
And makes milch-kine yield blood, and shakes a chain
In a most hideous and dreadful manner.
You have heard of such a spirit, and well you know
The superstitious idle-headed eld
Receiv’d, and did deliver to our age,
This tale of Herne the Hunter for a truth.

Herne made his first recorded appearance in William Shakespeare’s 1597 play The Merry Wives of Windsor, where he served as a cautionary tale told to keep young children away from the Windsor woods. Shakespeare’s Herne terrorized animals and people alike. Unlike later depictions of the character, this version did not ride a horse and elected instead to haunt a single tree. In some versions of the story, he appeared as “Horne.” This alternate name suggests that Herne may have been based on Robert Horne, a historical yeoman and poacher who lived during the time of Henry VIII. Though Herne’s appearance in the play was brief, it inspired countless future works and interpretations of the character.

Since Herne’s first appearance in The Merry Wives of Windsor, scholars and novelists have both added to his legend and attempted to discern its origins. Scholar Samuel Ireland has suggested that Herne’s death must have been unholy for him to become a haunt of the woods; such a theory lines up with the idea that Herne committed suicide. Mythologist Jacob Grimm has connected Herne to the Germanic legend of the Wild Hunt, and believes that Herne may have served as its leader.

The 1843 novel Windsor Castle by William Harrison Ainsworth popularized Herne outside of the theater world and expanded on his legend. In this version of the tale, Herne was gored by a stag he had been hunting and lay close to death. In classic Faustian form, the Devil appeared and offered Herne his life, on the condition he wear the same stag’s antlers on his head. Herne accepted the deal, and continues to haunt the woods near Windsor Castle to this day. This version of Herne’s legend was so popular that determining the location of Herne’s Oak became a typical Victorian pastime; even Queen Victoria weighed in on the topic.

Herne allegedly appeared to many during the Victorian era; such appearances continued into the 20th century, when they began to be seen as omens. By this time, Herne’s legend had grown larger. He was accompanied by hounds, now, and was said to sound a horn as he approached. Herne’s appearances were said to precede natural disasters and the deaths of monarchs, though such stories are likely apocryphal.

While it is impossible to know exactly what Herne might have been prior to his appearance in Shakespeare, scholars have nevertheless attempted to decipher his connection to the larger Celtic and Germanic mythos.

Herne’s horned appearance and connection to animals were qualities not unlike those of Cernunnos, a mysterious Gaulish deity of wild places that may have had a following in Berkshire prior to the arrival of Christianity. Like Herne, Cernunnos had horns protruding from his head; unlike Herne, Cernunnos defended nature at all costs.

A theory favored by Jacob Grimm claimed that Herne was related to Odin, the Norse god of the dead. Among the Germanic tribes that made their way to England, Odin was known as Wotan and led the Wild Hunt in collecting the souls of the dead for his army. Wotan bore the title of Herian, meaning head of the Hunt. Unlike the Norse Odin, Herne and Wotan both bore horns on their heads.

Herne’s popularity in the Victorian period ran parallel to the rise of the horned demon-god Baphomet among occultists. Like other horned deities, Herne is a popular figure among folk revivalists and neopagan movements, particularly those based in England.

Since Shakespeare, Herne has taken on a life of his own, appearing in a wide range of popular culture, including: