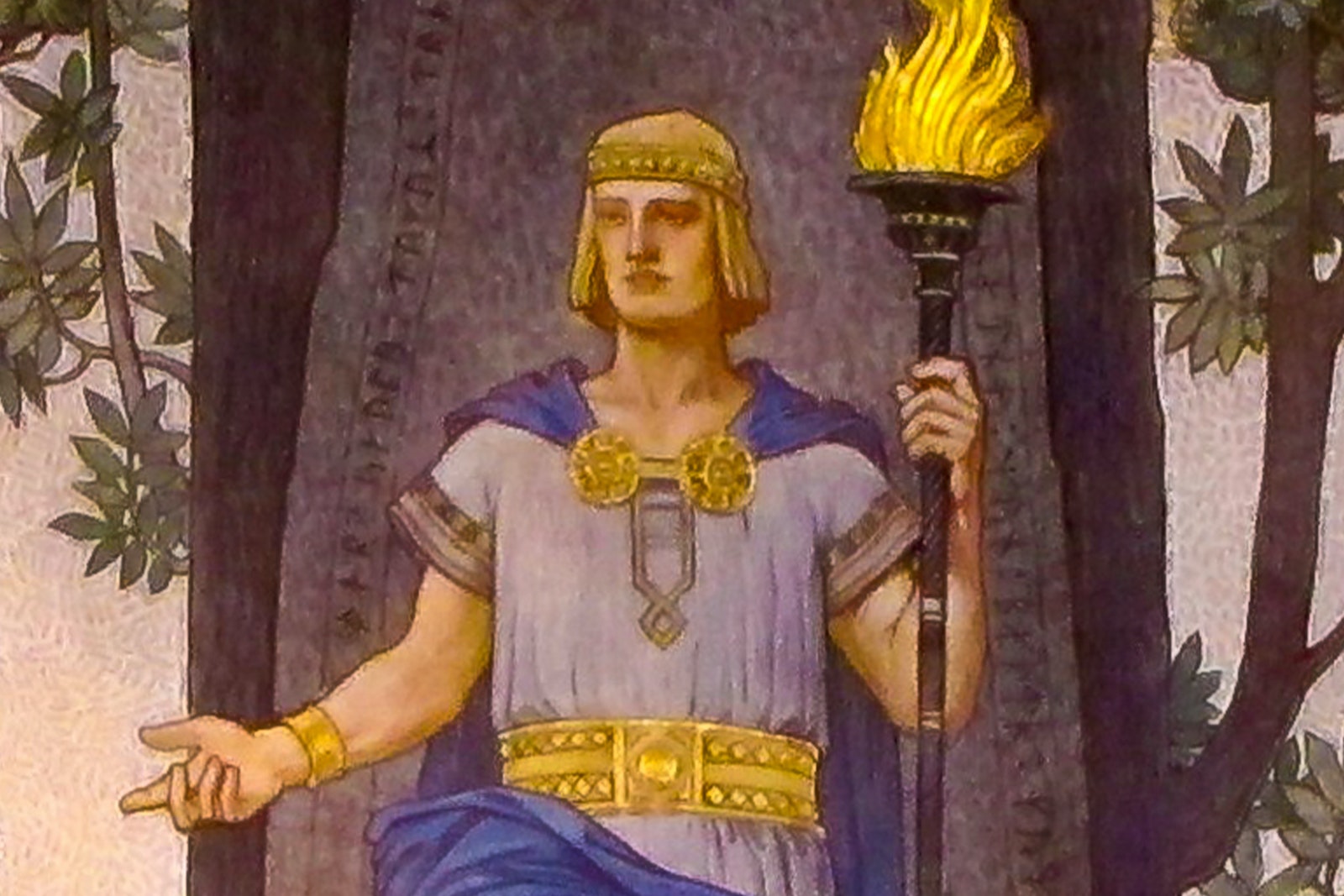 Heimdall the watcher was a Norse deity of the Aesir tribe, a god of keen eyesight and hearing who stood ready to sound the Gjallarhorn at the beginning of Ragnarök. From what little evidence has survived, Heimdall appears to have been a protector of the deities and a guardian of the passages to and from the Nine Realms. For his alleged role in granting wisdom and social order, he was also regarded as a father and patron to human beings.

He had teeth of gold, and was said to have had nine mothers, sea giants from among the jötnar. These multiple mothers were likely a reference to the Nine Realms over which he kept watch. In any case, Heimdall appears to have been associated with the sea, gold, roosters, and rams.

While the name “Heimdall” had an uncertain etymology, it appeared to be formed from a combination of words meaning “world,” “eminent,” and “radiant.” The literal translation of his name would be “radiant world.” Another possible translation of the name could be “the one who illuminates the world.”1

Heimdall went by a number of epithets, such as Hallinskidi, meaning “the horned,” in all likelihood a reference to his association with rams. He was also called Gullintanni, meaning “the one with the golden teeth” or simply “gold-toothed," and Vindlér, meaning “the turner.” In one eventful story, he also took the name Ríg, or Rígr.

Befitting his status as a watchman, Heimdall possessed the keenest senses of sight and hearing among all the gods. In the Gylfaginning, a book of the Prose Edda by the thirteenth-century Icelandic scholar Snorri Sturluson, it was claimed that Heimdall required less sleep than a bird, could see in the night as though it were day, and could spot a target from a hundred leagues away. Additionally, his sense of hearing was said to be so acute that he could hear grass grow and wool sprout from sheep.

Heimdall carried a horn called the Gjallarhorn, meaning “shrieking horn” or “loudest horn.” According to prophecies, when Heimdall spied the events signaling the beginning of Ragnarök, he will blow the horn with a resounding shriek so penetrating it would be heard in all worlds, bringing the Norse gods together for the final battle.

The divine sentinel rode a golden-maned horse called Gulltoppr (appropriately “the golden-maned”) and lived in a castle in the clouds called Himinbjörg (“the castle of the heavens,” or “sky castle”). Himinbjörg stood at the Asgardian end of the Bifrost, the rainbow bridge that connected Asgard, the world of the gods, to Midgard, the world of humans. In the Grímnismál of the Poetic Edda, Odin described Himinbjörg as one of the most wondrous of all places in Asgard:

Himingbjorg is the eight, and Heimdall there
O’er men hold sway, it is said;
In his well-built house does the warder of heaven
The good mead gladly drink.2

One there was born in the bygone days,
Of the race of the gods, and great was his might;
Nine giant women, at the world’s edge,
Once bore the man so might in arms.
Gjolp there bore him, Greip there bore him,
Eistla bore him, and Eyrgjafa,
Ulfrun bore him, and Angeyja,
Imth and Atla, and Jarnsaxa.
Strong was he made with the strength of the earth,
With the ice-cold sea, and the blood of swine.3

By way of Odin, Heimdall’s half brothers were Thor, Vidarr, and Váli. Heimdall was also related to Tyr, Bragi, Hermod, and, Hodr.

Though Heimdall took no wives or divine consorts, he did reproduce with humans. His anonymous children, according to the Rígsþula, were said to be the progenitors of the three classes of humankind.

While Heimdall’s own origins were lost in time—though his association with the ram may have indicated a connection to Indo-European deities—his role in the creation of human social classes was preserved in the poem known as the Rígsþula. In the early days of humanity, Heimdall disguised himself as a human named Ríg and went walking through the countryside:

Men say there went by ways so green
Of old the god, the aged and wise,
Mighty and strong did Rig go striding.4

The poem followed the meanderings of Ríg as he traveled from dwelling to dwelling. At each of his destinations, Ríg found a couple with whom he spent three nights dispensing his wisdom and—more scandalously—sleeping with the women. With each woman, Ríg sired a child with certain distinctive characteristics: an ugly brute with knotted hands named Thræll, a sturdy boy with a ruddy face named Karl, and a blonde boy with shining eyes and a thirst for adventure, hunting, and war called Jarl. These three children became the progenitors of the three Norse social classes: slaves (or thralls), free laborers and farmers, and the nobility, also known as aristocrat-warriors.

As the poem proceeded, Jarl had a son named Kon who uniquely embodied the high-minded qualities of lordship. Ríg adopted Kon as his own son and began teaching him the mysteries of runes in the hopes that the boy would one day be king. The poem thus not only established the origins of social divisions, but also cast those divisions as part of a wise and proper order ordained by Heimdall himself. In this way, the Rígsþula demonstrated how mythic traditions buttressed and validated existing social and political orders.

#Heimdall in the Thrymskvitha

The Þrymskviða, in the Poetic Edda, related the story of the theft of Thor’s hammer by Thrym, the giant king of Jötunheimr. It began with Thor discovering the theft and approaching the gods for help. The trickster Loki borrowed Freya’s cloak—a magical garment made of falcon feathers that gave its wearer the ability to fly—and rushed off to find it. When he returned, Loki informed the gods that Thrym had stolen the hammer and would not return it unless he received Freya in exchange.

When the gods met to determine their response, it was Heimdall who made the winning suggestion: the gods would dress Thor as Freya and have him sneak unawares into Thrym’s halls in Jötunheimr. The Þrymskviða suggested that Heimdall, having seen the future, already knew what the outcome would be:

Then Heimdall spake, whitest of the gods,
Like the Vanir he knew the future well:
‘Bind we on Thor the bridal veil,
Let him bear the mighty Brisings’ necklace;
Keys around him let there rattle,
And down to his knees hang woman’s dress;
With gems full broad upon his breast,
And a pretty cap to crown his head.’5

During Ragnarök, the sequence of events that would lead to the death of the gods and the destruction of the world, Heimdall was fated to play a decisive role. According to prophecies, Heimdall, the ever-watchful one, would see the onset of Ragnarök before the other gods. When he did so, he would sound his “loud shrieking” horn, the Gjallarhorn. The blast would resound through the Nine Worlds and the gods would assemble for their final confrontation with the jotnar and Loki, who had been punished so severely for his betrayal of Baldur that he switched allegiances.

During the decisive battle, Heimdall (who, for some reason, was wearing Freya’s necklace, Brísingamen) would confront Loki and the two would fight to their deaths in the form of seals.

The famed rain-bow’s defender,
Ready in wisdom, striveth
At Singasteinn with Loki,
Fárbauti’s sin-sly offspring;
The son of mothers eight and one,
Mighty in wrath, possesses
The Stone ere Loki cometh:
I make known songs of praise.6

Heimdall was never featured prominently in the revival of Germanic and Northern European mythology that occurred during the nineteenth and twentieth centuries. However, he did find an important role in both Marvel Comics and the Marvel Cinematic Universe. While Marvel invented numerous stories involving Heimdall, nearly all of them stayed true to his basic characteristics. Heimdall could see and hear all that happened in the Nine Worlds, and served as both the watchman of Asgard and the guardian of the Bifrost, a rainbow bridge that connected Asgard to the other worlds. In the Marvel universe, Heimdall operated the Bifrost with a sword called Hofund (also called the Bifrost Sword). This version of the character was a heroic and essentially good figure whose sole mission was the protection of Asgard. In the movies, Heimdall was portrayed by Idris Elba.