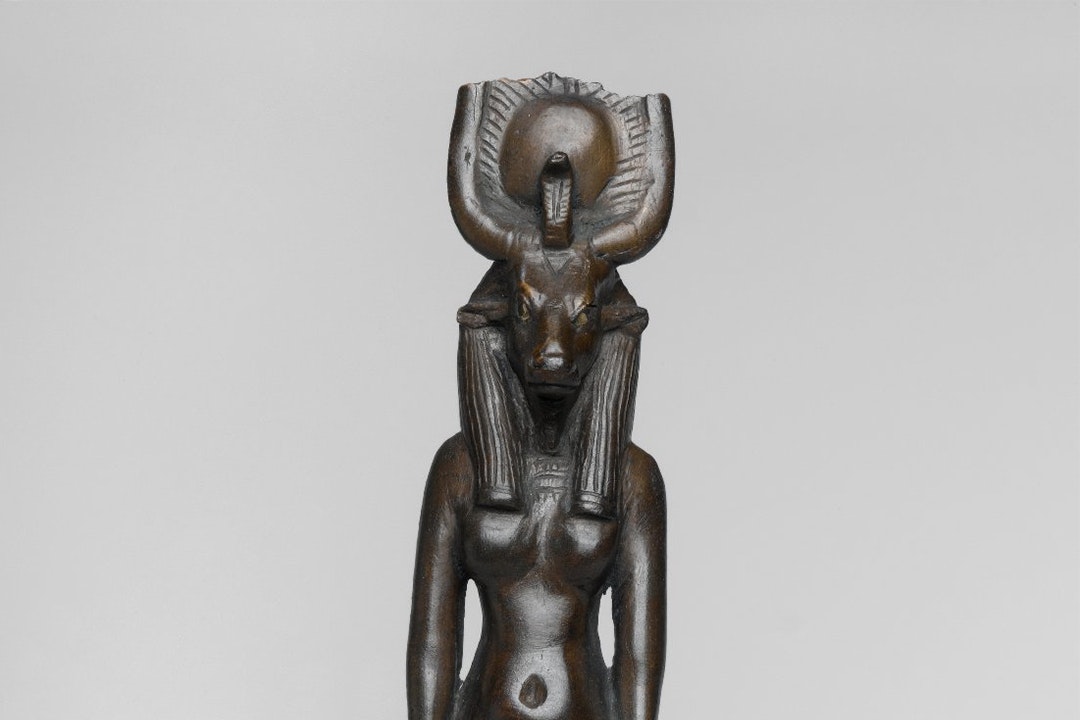 With origins dating back nearly 5000 years, cow-headed Hathor was one of the oldest goddesses in the Egyptian pantheon. Though Hathor was the goddess of love, motherhood, birth, joy, and music, she fulfilled other roles as well. In her earliest days, she rampaged throughout the land destroying anyone who dared to mock her father. Her various facets demonstrated both the consistency and the mutability of Egyptian cosmology.

While Isis would eventually replace Hathor in many of her traditional roles, the goddess’s worship continued well into the Greco-Roman period—over 3000 years after it first began.

Hathor’s name literally meant “The House of Horus.” Her name’s significance is harder to parse, as it has a number of multiple interpretations.

One interpretation is that the name referred to Hathor as Horus’s mother, with “house” being taken to mean “womb.” The hieroglyph (a falcon inside of the sign representing a walled enclosure) is vague, however, and could just as easily refer to Hathor as Horus’s wife.1 Yet another way to read this sign was as a metaphor for the sky; as a falcon, Horus was thought to reside there.2

Among her many epithets were:

While Hathor was most easily recognized as a cow-headed woman, she had a number of other representations including a cow, a woman with cow ears, and a woman with cow horns and a solar disk. The last of these was difficult to differentiate from Isis, who was sometimes portrayed in the same manner.7

More than a mere solar disk, the Eye of Ra was considered to be a manifestation of Hathor, though Bastet and Mut shared this distinction.8 At times, Hathor was also portrayed as a lioness, a serpent, a sycamore tree, or papyrus plant.9

The Egyptians associated Hathor with the constellation Mesketiu—now known as Ursa Major. This was because Mesketiu resembled the hind leg of an ox.10

While many elements of Hathor’s worship changed over time, she was always regarded as the goddess of love, marriage, and motherhood.11 Her connection with love persisted well into the Greco-Roman period, where she was regarded as a manifestation of Aphrodite.12

In addition to love, Hathor was the goddess of pleasure and music. The sistrum, a rattle-like instrument, played an important role in the cult of Hathor’s rituals and ceremonies. Alcohol was also closely linked to her cult, and the goddess’s image could often be found on storage vessels containing wine or beer.13

Hathor was often shown wearing a menat, a beaded necklace that symbolized rebirth.

One confusing element of Egyptian mythology was that gods and goddesses could become one another by acting like one another. In other words, when Hathor expressed elements of Sekhmet (i.e. violent rage), she became Sekhmet. The reverse could also apply: by placating Sekhmet, worshippers hoped to convert her into a more benign goddess like Hathor or Bastet.14 At times, Hathor was similarly conflated with Nut and Isis.15

Much like Thoth and Anubis, Hathor was not a central character in the Egyptian mythos, but instead played a vital role in each of Egypt’s major religious branches. Egyptian religion was heterogeneous, with four main cults dominating the theocratic spectrum: the Ogdoad of Hermopolis, the Theban triad, the Memphite triad, and the Ennead of Heliopolis.16 Due to her unorthodox position, Hathor had peculiar and at times contradictory relations with her fellow gods. Throughout the various cults and ages, she was described as:

Hathor was one of the oldest gods in the Egyptian pantheon, with some scholars suggesting she originated in the pre-Dynastic period over 5000 years ago. Evidence of her existence prior to the 3rd Dynasty (c. 2660 BCE) is sparse, however, and modern scholarship has shifted away from pre-Dynastic origins.23

Murky origins nonwithstanding, Hathor’s cult rose to prominence during the 4th Dynasty, and solidified its hold on Egyptian theocracy in the 5th Dynasty. For over 500 years, Hathor held a position of cosmological significance.

The fall of the 8th Dynasty brought about the First Intermediate Period (2190-2066 BCE), a time when Egypt lacked strong central leadership. When Mentuhotep II came to power in 2061 BCE, he recognized that unifying Egypt would take propaganda as well as military might. Unfortunately, Mentuhotep was not related to the Memphite family that had ruled Egypt for 900 years, making his claim to the throne tenuous at best.

Mentuhotep’s solution was simple and elegant: he claimed to be descended from Hathor herself. The Memphite family were said to be descendants of Ra and Horus, and while Hathor was situated within the ruling pantheon, she was peripheral enough for Mentuhotep to claim lineage without dispute. To solidify his claim, Mentuhotep married multiple priestesses from the cult of Hathor.

Mentuhotep’s tactics proved successful, and he ultimately managed to reunite Egypt. Hathor shared his success, becoming one of Egypt’s most important goddesses. Though she would cede many of her roles to Isis over time, Hathor remained a popular figure in the Egyptian mythos.24

The Egyptian creation myth centered around a creator god (usually Ra, but possibly Ptah, Atum, or Amun, depending on the tale) who brought the world into being by ejaculating and created the first gods through his seed.

Hathor’s cult held that the goddess was both the hand that aroused the creator and the vital force of his seed.25 The Coffin Text alluded to her role in the formation of the universe, declaring her “the Primeval, the Lady of All.”26

Because Ra created his Eye (one of Hathor’s manifestations), and Hathor helped him create the world in turn, Hathor was said to be her own mother.

Some myths in Egyptian mythology were recurring—as was the case with the pacification of powerful female deities.27

This myth began with humanity making fun of Ra in his old age. Ever sensitive to insults, Ra sent his daughter Hathor to punish humans for their insolence.28 In the form of a lioness, she slaughtered all who dared to ridicule Ra.

Ra eventually decided that the humans had been punished enough and called Hathor off. By this time, however, she had become enamored with her slaughter and refused to stop. For all his might, Ra could do nothing to stop her.29

In order to halt her rampage, Ra ordered that 7000 barrels of beer to be made and mixed with the crimson fruit of the mandrake. The spiked beer was then sent out across the countryside in a single night.

When Hathor next sought to slake her bloodlust, she found the barrels of blood-red beer waiting for her. Hathor was intrigued, and stopped to try the strange concoction. Finding it delicious, kept drinking until she fell into a deep slumber.

The mandrake juice did changed more than the beer’s color! It enhanced the drink’s sedative properties as well.

By the time she awoke, her wrath had passed and Ra was able to convince her to return home.30 This myth may have served as justification for the bountiful consumption of alcohol during the annual Feast of Hathor.31

One notable myth involving Hathor was quite peculiar, and not fully understood.

A particularly heated debate occurred during the trial of Horus and Set - an event that would determine Egypt’s rightful ruler once and for all. In the midst of this debate, the god Babi insulted Ra by telling him “your shrine is empty.”32 This quip caused the sensitive Ra to storm out of the trial, leaving the proceedings without a judge.

Hathor followed Ra to his tent, and without warning began dancing and flashing her genitalia, causing him to laugh out loud. His good humor restored, Ra returned to the trial, allowing it to proceed as planned.33

Hathor assisted Horus on other occasions as well. Following a particularly brutal battle with Set, Horus found himself utterly defenseless. Seizing his opportunity, merciless Set beat the broken Horus before plucking out his eyes and burying them in ground.

Horus was left helpless and alone on a mountainside until Hathor found him crying in pain. Taking pity on the poor god, Hathor caught a wild gazelle and poured its milk into Horus’s vacant sockets, miraculously restoring his sight.34

#Gehesty and The Origin of Juniper Berries

Ancient Egypt was divided into regions called nomes, with each region having a god or pair of gods associated with it. Some of these regions were hotspots for mythological activity, with geography and a bit of luck conspiring to create areas with considerable religious significance.35

Hathor had an intimate connection to the region of Gehesty. During Set’s reign, she lurked on a mountain in the north and preyed upon his followers. As a great serpent, she killed any Set supporter that dared to approach the mountain. When their blood fell upon the ground, the droplets turned into juniper berries.36

Hathor initially played a minor role in the Egyptian afterlife by overseeing the trials of deceased souls. Over time, however, her role expanded to providing nourishment to the dead. Sitting beneath her sacred sycamore, she served food and milk from her seven cows (also known as the Seven Hathors).37

The Seven Hathors played their own role in the afterlife, determining a person’s lifespan and the cause of their death.38

Just because the dead could expect Hathor to provide food did not mean they were free to live off the work of others. In Spell 189 from the Book of the Dead, the deceased was asked by the demon One who Cannot Count if they “will…live on someone else’s goods everyday.[sic]”

The deceased’s reply was that, while they intend on dining under the Hathor’s sycamore, they also intended on ploughing the Field of Reeds.39 Even in death, the Egyptians did not appreciate freeloaders.

#The Festival of the Sacred Marriage

The Festival of the Sacred Marriage was a ritual dating to the Ptolemaic period. In this ceremony, which began 18 days into the month of Paoni, Hathor and Horus of Edfu were husband and wife. Hathor’s idol was taken from her temple at Dendera upriver to Horus’s temple at Edfu.

When Hathor arrived at the temple, Horus’s image was brought down to the river to greet her. The following day (the anniversary of Horus’s victory over Set), the pair left Horus’s temple to continue traveling upriver. Along their journey, the pair celebrated rituals such as the Opening of the Mouth and the Festival of Behdet.40

The festivities continued until Horus and Hathor had celebrated their marriage with a night of drinking and revelry open to all. When the festival ended, the couple’s idols were returned to their respective temples until the following year.41

While some Egyptians gods and goddesses captured the imaginations of successive generations, others languished in obscurity. Hathor existed somewhere in the middle of that spectrum. Though she has fallen far from her status as a preeminent goddess, Hathor still maintains a respectable presence in the modern era.

In the Capcom’s Street Fighter series, the character Menat was partially derived from Hathor. The word menat refers to the beaded necklace Hathor often wore, and its corresponding hieroglyph strongly resembled the glyph for Hathor’s name.42

Élodie Yung portrayed Hathor in the 2016 movie Gods of Egypt. This version of Hathor was in love with Horus, though it should be noted that the film’s Horus was not the same Horus she married in traditional Egyptian mythology43

Brian Swann’s 2010 poem Hathor referenced both the goddess and her association with cows.