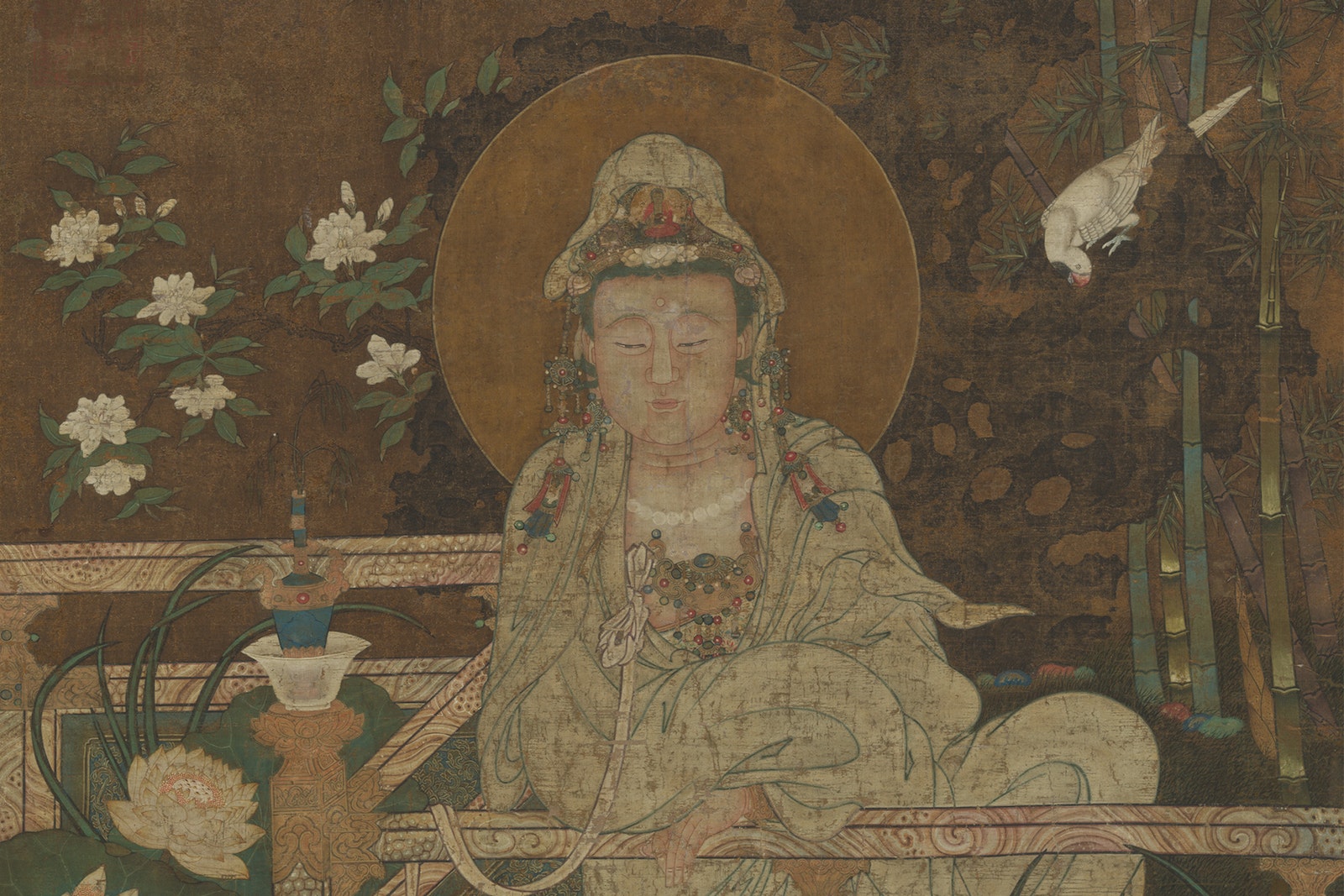 In Chinese mythology, Guanyin (觀音) is the goddess of mercy and considered to be the physical embodiment of compassion. She is an all-seeing, all-hearing being who is called upon by worshipers in times of uncertainty, despair, and fear. A Ming official from the 14th century composed the following poem to praise the goddess:

Guanyin is originally based on the Hindu god Avalokiteśvara. Avalokiteśvara’s myth spread throughout China during the advent of Buddhism and mixed with local folklore in a process known as syncretism to become the modern day understanding of Guanyin. Though she can take both male and female form, she is most often represented as a woman in Chinese lore.

Over time, her name was eventually shortened to Guānyīn (觀音). Her name represents her ability to hear all the cries of suffering in the world and her infinite compassion. In the Wade-Giles style of romanization, her name is written as Kuanyin.

Guanyin is usually depicted wearing a flowing white robe and jade necklaces. In Chinese culture, the colors white and jade both symbolize purity. She often carries a vase of water in one hand and a willow branch in the other, and is typically shown standing on the back of a dragon, sitting on a lotus flower, or riding on clouds.

Although she is reincarnated multiple times, Guanyin was originally the daughter of King Zhuang of Chu and his wife, Lady Fan. She has two attendants, Longnü, a granddaughter of the Dragon King, and Shancai, one of her disciples.

Guanyin plays a role in a number of Chinese myths and is always portrayed as a powerful, benevolent figure who is motivated by a supreme sense of compassion.

Origins: The Legend of Miao Shan

Before she became the goddess of compassion, Guanyin was once a young girl named Miao Shan (妙善) who was born to King Zhuang of Chu and his wife, Lady Yin. But, there was something different about Miao Shan that set her apart from other girls. As soon as she had the ability to speak, Miao Shan began to chant Buddhist sutras.

When she grew old enough for her father to think about marrying her off to some powerful lord, she told him that she had no desire to marry and aspired to become a Buddhist nun. She said she would only agree to an arrangement if it would help solve three problems: the suffering of age, the suffering of sickness, and the suffering of death.

Unable to find a match that could meet her demands, her father reluctantly agreed to allow her to join a Buddhist temple. Before letting her go, however, he ordered the monks to give Miao Shan the hardest work to discourage her, forcing the young girl to work day and night without sleep.

Much to her father’s chagrin, the young forest animals who lived around the temple took pity on the young girl and began to help her with the chores. He became so enraged upon learning Miao Shan was getting help that he set fire to the temple, but she intervened and extinguished the flames with her bare hands. Now fearing that his daughter was possessed by some kind of demon, her father sentenced her to death.

On the day of Miao Shan’s death sentence, she went meekly to the execution block. But when the executioner brought his axe down upon her neck, the axe shattered into a thousand pieces. His sword also broke, and arrows from his bow veered off course. Seeing how much trouble she was causing the executioner, Miao Shan forgave him, let herself be killed and absorbed the karma of his actions, so he wouldn’t have to pay for her death in the afterlife.

When she arrived in Hell, the Earth around her burst into life with blossoming flowers. Seeing all the suffering souls around her, Miao Shan began to weep with sorrow. She released all the positive karmic energy she had accumulated and allowed millions of souls to escape from Hell. Yan Wang (閻王), fearing that his whole kingdom would collapse, allowed her to return to Earth as the enlightened being, Guanyin.

A young boy named Shancai, who lived in India, heard about a mysterious Buddhist teacher named Guanyin who resided on a faraway rock island in the middle of the sea. Despite the fact that he was born with a paralyzed leg, he managed to travel to Guanyin’s island and begged her to take him on as a disciple.

To see if Shancai was serious about becoming her student, Guanyin sent him a vision of three pirates chasing her off a cliff. Without hesitation or regard for his disability, Shancai jumped off the cliff to save her from drowning. Guanyin caught Shancai in midair and set him down on the shore. When Shancai tried to get up, he found that he suddenly could use both of his legs. From that day on, Shancai would always be by his teacher’s side.

One day, when the third son of the Dragon King was playing in the ocean, he became entangled in a fisherman’s net. Out of the safety of the ocean, he was unable to transform from his fish form into his dragon form. He cried out for his father, but since the boy was out of the water, the Dragon King was powerless to do anything. Sure that he was going to die, the young boy wept and begged for someone to help him.

Guanyin heard the young boy’s cries and gave Shancai some money to save him from the fisherman. When Shancai arrived at the fisherman’s stall, he found himself in the midst of a huge crowd. Despite the fact that the fish had been out of the water for hours, it was still alive. The fisherman was sure that he had caught a magical fish and was holding an auction to sell it to the highest bidder. Shancai was quickly outbid.

Shancai begged the fisherman to let the fish go, but he refused. Guanyin quickly intervened. She projected her voice into the crowd and said “A life should belong to the one who tries to save it, not one who tries to take it.”

Filled with shame and realizing the gravity of the situation, the crowd slowly dispersed. Shancai took the fish and released it into the ocean where the young boy immediately transformed back into a dragon and swam home to his father.

To thank Guanyin and Shancai, the Dragon King sent his granddaughter, Longnü, to gift them the Pearl of Light, one of the most beautiful gems in the universe. Upon seeing Guanyin, Longnü was overcome with emotion and begged to become her disciple. Guanyin accepted her offer, but only on the condition that Longnü would become the new owner of the pearl.

Journey to the West

Guanyin plays a minor but significant role in Journey to the West. When the monk, Tang Sanzang, has trouble subduing the Monkey King, Sun Wukong, she gives him a ring that allows Tang to control him. Whenever Tang and his traveling companions encounter a particularly difficult demon, she often steps in to defeat the demon herself.

Guanyin is an immensely popular figure in Chinese culture. Her significance is often compared to the Virgin Mary in Christianity. Guanyin is said to offer protection to anyone experiencing pain, suffering, or fear in their life with special attention given to women and children. She’s even said to have the ability to grant children to childless parents.

Guanyin has been featured in a number of stories, TV shows, and movies, most notably in the popular 2011 Thai movie, Top Secret: Wai Roon Pan Lan, and as a recurring character in Richard Park’s science fiction novels. Guanyin has even been made into an android at the Kōdai-ji temple in Kyoto, Japan where she conducts daily prayers.