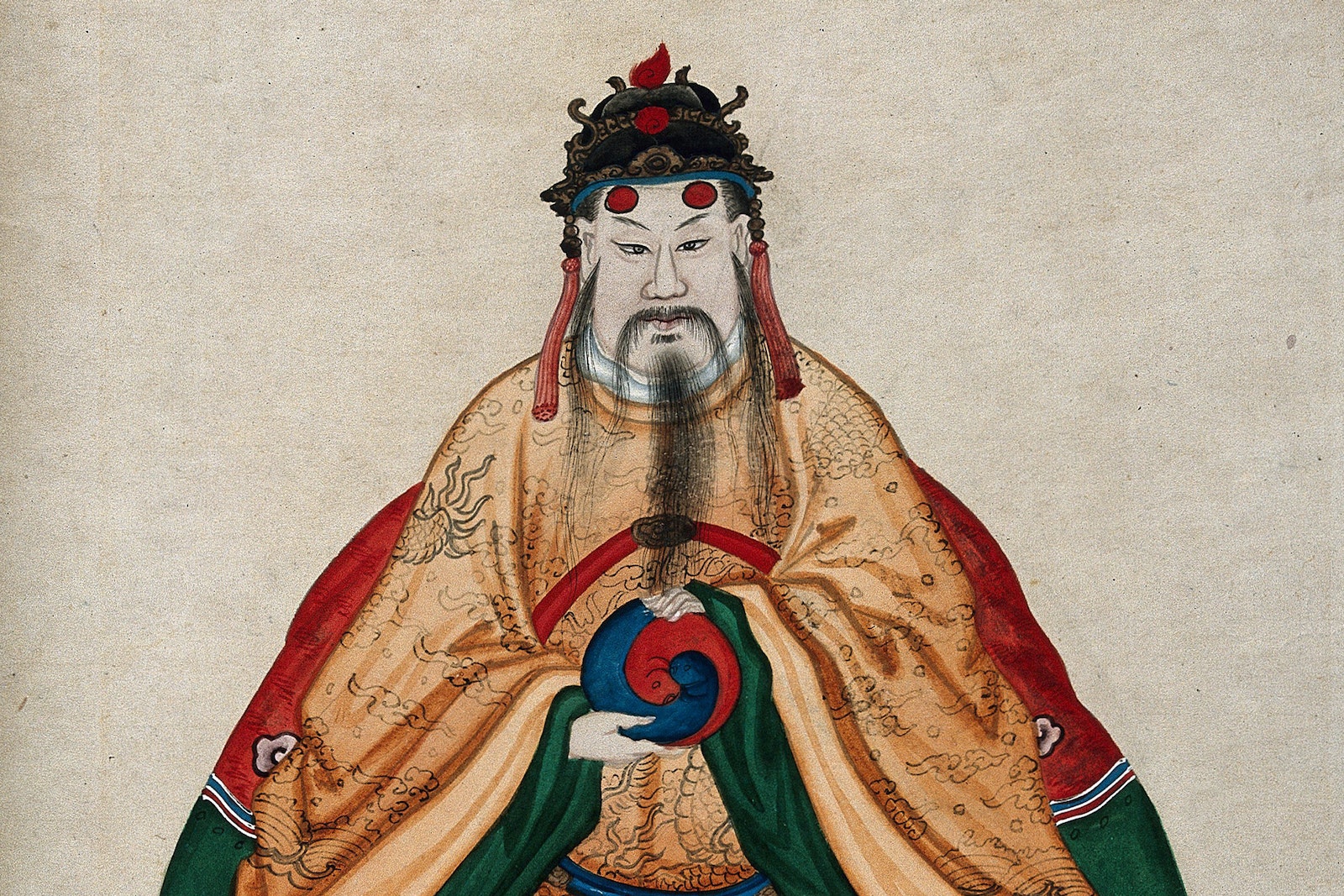 In Chinese mythology, Fuxi is seen as mankind’s first male ancestor, a cultural hero, and one of the most benevolent gods in Ancient China. Fuxi is credited with creating several innovations that benefited humanity like the invention of the writing system, fishing, and the domestication of animals.

Fuxi is often portrayed in art as having the head of a human and the body of a snake—like his sister, Nüwa. He’s also sometimes simply drawn as a wise, sage-like man dressed in animal skins or long yellow robes.

Fuxi's name, 伏羲, is made up of the Chinese character meaning to lie down, fú (伏), and the Ancient Chinese word for vapor, xī (羲). In other styles of romanization, like the Wade-Giles system, his name is written as Fu-Hsi. In ancient texts, Fuxi is also sometimes called Paoxi (庖犧). Páo (庖) is an old-fashioned way to say kitchen or cook, while xī (犧) is an archaic Chinese word for sacrificial animal. In the Wade-Giles system, Paoxi is written as Pao-Hsi.

Fuxi is married to his sister Nüwa. Their mother is the goddess, Huaxu, who suddenly became pregnant with twins after stepping in a footprint left by the thunder god, Leigong.

In one version of the creation myth, Fuxi created humanity with his sister, Nüwa through their marriage. Nüwa is considered to be the original mother goddess in Chinese mythology.

Fuxi is considered to be one of the most beloved deities in Chinese mythology because he brought civilization and all of its benefits to humanity. The ancient Chinese historian, Ban Gu, wrote the following account of Fuxi’s deeds:

In the beginning there was as yet no moral or social order. When [men were] hungry, they searched for food; when satisfied, they threw away the remnants. They devoured their food hide and hair, drank the blood, and clad themselves in skins and rushes. Then came Fuxi and looked upward and contemplated the images in the heavens, and looked downward and contemplated the occurrences on earth. He laid down the laws of humanity.

#The Invention of Fishing and Trapping

Fuxi and Nüwa genuinely cared about the people they created and considered them their children, often intervening in their lives whenever they encountered significant hardships.

After the sky was mended by Nüwa and humanity was saved, mankind's population boomed exponentially. In ancient times, the earth was a place that teemed with lush vegetation and was full of all sorts of animals. At the time humans knew no other way to feed themselves than by hunting. Fuxi noticed that when the hunts went well, the people were able to eat well for days. When they failed to catch anything, however, they were left to starve for indefinite periods of time. After seeing several of his children suffering from hunger, Fuxi was overcome with pity. He went to a nearby stream, plunged his hands in and caught several fish. He then showed humans how they could catch fish with their hands, too.

However, the Dragon King, Longwang (龍王), who ruled the oceans, rivers, and the weather, was furious that humans were eating his subjects. He worried that if they continued fishing, he would soon have no one to rule over. His prime minister, a wise tortoise, advised the Dragon King to tell Fuxi that humans could no longer fish in his rivers using their hands.

Fuxi was shocked at the Dragon King’s decree and spent several days wandering the countryside thinking about his problem. How would his children be able to eat if they couldn’t use their hands to catch fish? One day, as he was sitting underneath the shade of a big tree, Fuxi noticed a small spider weaving a web above him. It had already entrapped a few bugs in its sticky silk. Fuxi was suddenly struck with inspiration. He gathered up a bundle of wild reeds, wove them into a large net, ran down to the river banks, and threw his net in. After a few seconds, he hauled it in and was shocked at how many fish were jumping in his net. Delighted with his catch, he ran to show his children his new invention.

When the Dragon King learned what Fuxi had done, he was so angry that his eyes popped out straight out of his head. From that day on, the Dragon King’s eyes would always bulge slightly from his head, just like his fishy subjects.

His prime minister, seeing how angry he was, tried to climb onto the Dragon King’s shoulder to offer some calming words, but the king was so angry that he slapped the tortoise down into an ink bowl. The tortoise and all of his children’s shells were then forever stained black.

#The Bagua (八卦) or Eight Trigrams

Perhaps his greatest religious contribution to Chinese society is the creation of the bagua (八卦) or eight trigrams. The symbols are made up of three broken or unbroken lines and are meant to represent the eight fundamental principles of reality. The bagua is important in Chinese-Buddhism and the practice of feng shui. Fuxi is said to have been inspired to draw the eight trigrams after seeing the back of a turtle who emerged from a river.

#The Domestication of Livestock

In addition to creating fishing and the bagua, Fuxi is also credited with the domestication of livestock. His reasoning was that keeping animals around for milk, meat, and labor was a lot more practical than wasting time and energy hunting. Fuxi is also said to be responsible for the invention of currency, writing, smelting metals, preserving meat, and the practice of exchanging engagement gifts.

#The Creation of Mankind

Fuxi is also said to have played a role in mankind's creation. In one version of the myth, Fuxi and his sister, Nüwa, married and produced the human race through their union. In another, Fuxi helped Nüwa make humanity from clay and helped her patch up the sky after the battle between Zhurong (祝融) and Gonggong (龔工). However, his role in creating humanity and subsequently saving them from the great flood is considered to be a lot less significant than his sister's contribution. Since Ancient Chinese society was largely matriarchal, he's usually described as an "assistant" whenever he's mentioned alongside Nüwa.

A month-long festival is held from February 2 to March 3 of the lunar calendar to honor Fuxi at his temple in Tianshui City. His birthday, the 16th day of the lunar calendar, is especially important. People from neighboring provinces make the journey to light incense, pray, and pay their respects to Fuxi. People often call upon to Fuxi to improve their health, the state of their financial affairs, or to simply thank their original ancestor.

Fuxi has been featured as a character in the video games Dynasty Warriors and Age of Mythology. In Marvel's first Chinese-centric comic, Warriors of Three Sovereigns, the character Lin Lie wields a weapon called the "Fuxi sword" and is said to be the last descendant of Fuxi.