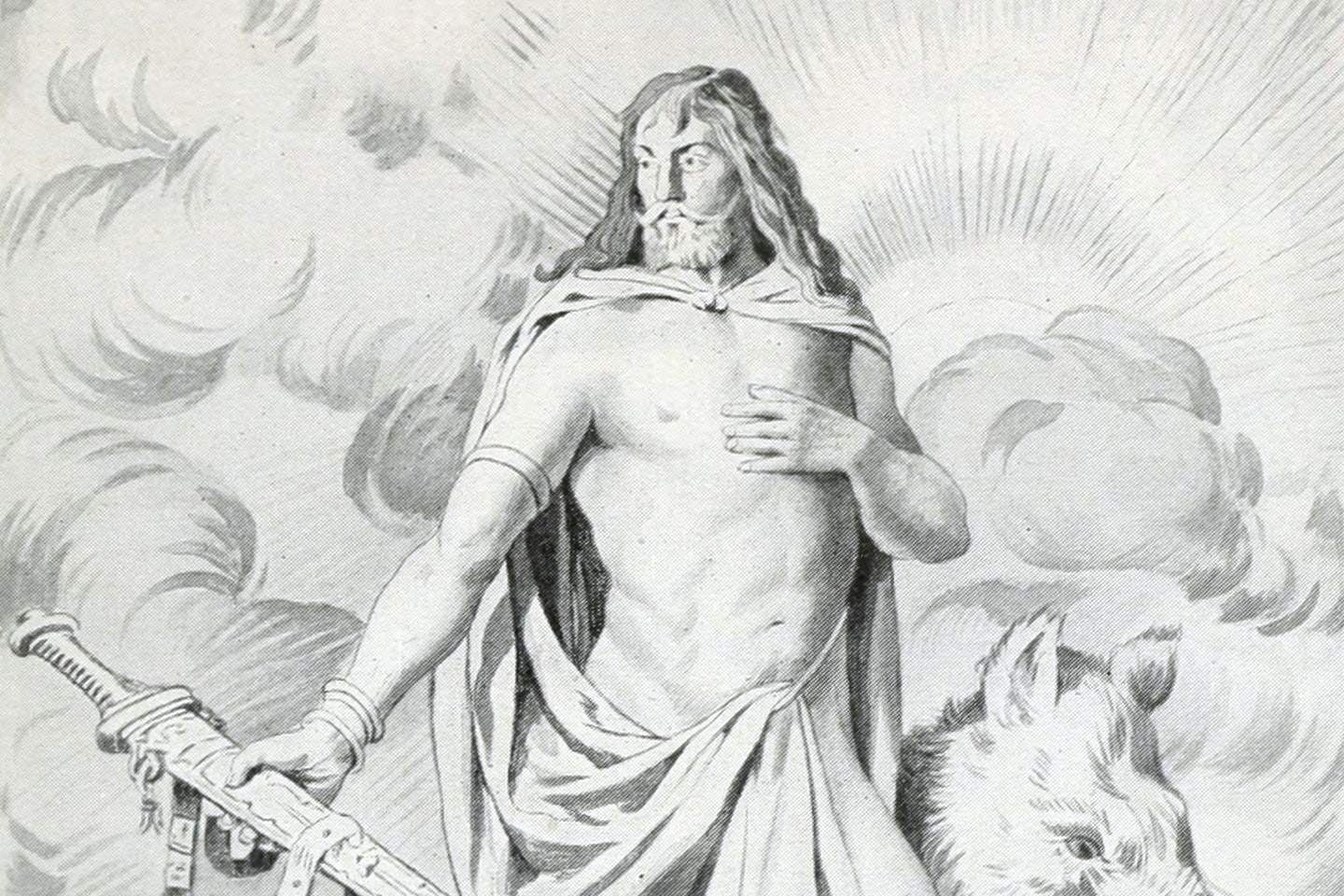 Freyr, of the Vanir tribe, was a Norse god of peace and prosperity. Among other things, he was associated with male virility, sunshine, and fair weather.1 Often depicted with an enormous phallus, Freyr was worshiped across Scandinavia (particularly in Sweden), where he was celebrated at weddings and harvest feasts. Famous for his accoutrements, which included a magical ship, a golden boar, and sword that fought on its own, Freyr was fated to die in mortal combat during Ragnarök.

Along with his twin sister Freya, Freyr was among the most prominent of Vanir deities. Brought to the Aesir as a hostage at the conclusion of Aesir-Vanir War, he earned a prominent position in the Norse pantheon thanks to his charm and goodwill. At the Norse temple in Uppsala, Sweden, Freyr occupied a leading role alongside Thor and Odin (note that this was not the same everywhere these gods were observed). Along with Baldur, he was the most beloved of all Norse gods.

Derived from the Proto-Germanic word *frawan, the name “Freyr” meant “lord” in the Norse language. This word was the masculine counterpart of “Freya,” meaning “lady,” just as Freyr was himself the counterpart of his twin sister.

A man of many magical possessions, Freyr commanded Skidbladnir, a ship forged in the furnaces of Svartalfheim by the dwarf craftsmen Brokkr and Sindri. Skidbladnir was as swift as any ship, and could be conveniently folded up and carried in Freyr’s pocket.

Freyr was also accompanied by another of Brokkr and Sindri’s creations—the mechanical boar Gullinbursti. The boar boasted a golden mane and bristles that glowed in the deepest gloom. According to Snorri Sturluson’s Skáldskaparmál of the Prose Edda, Gullinbursti “could run through air and water better than any horse, and it could never become so dark with night or gloom of the Murky Regions that there should not be sufficient light where be went, such was the glow from its mane and bristles.”1

Finally, Freyr wielded a sword that had the ability to fight on its own; the loss of this weapon would ultimately contribute to his demise during Ragnarök.

Freyr reigned over Alfheim, a realm of the light elves. Like Freyr, the light elves were known for their peace and goodness. Freyr was also attended by the messenger Skirnir and the servants Byggvir and Beyla, who were husband and wife.

Freyr was the son of Njord, a powerful Vanir who commanded the seas. While the name of Freyr’s mother remains unknown, it is believed that she was Njord’s sister. Freyr had only one sibling—his twin sister, the mighty goddess Freya.

As is true of all but the most prominent of Norse deities, the details of Freyr’s mythology remain scant. Sturluson’s Ynglinga Saga cast Freyr as a leading combatant in the Aesir-Vanir War. After the war ended, Freyr went to live among the Aesir as a hostage of sorts; he eventually earned their respect and became a trusted member of the court. Other sources, such as the 14th century Gesta Danorum, established Freyr as a particular important deity in Sweden.

At the center of Freyr’s surviving mythology was his marriage to the giantess Gerdr. As recounted in Sturluson’s Gylfaginning of the Prose Edda, Freyr visited Odin’s throne room and sat on Hlithskjolf, the high seat of the gods. The seat was special, for it offered its occupant a vantage unto all the realms of creation. From this perch, Freyr spied a woman walking slowly into a rich estate: “When she raised her hands and opened the door before her, brightness gleamed from her hands, both over sky and sea, and all the worlds were illumined of her.”2

Upon seeing such a vision, Freyr fell into a deep depression during which he refused food, drink, and all company. Concerned, Freyr’s father Njord sent a servant named Skirnir to see after his son’s troubles. When asked what had happened, Freyr replied “that he had seen a fair woman, and for her sake he was so full of grief that he would not live long if he were not to obtain her.”3 Freyr implored Skirnir to woo her on his behalf, and Skirnir agreed to do so. In return, he asked Freyr to turn over his sword that fought on its own. Freyr did so, and Skirnir set about the task, eventually returned with glad tidings—Gerdr had agreed to the marriage proposal.

The Gylfaginning would later demonstrate the full price of Freyr’s sacrifice. When Freyr tangled with the giant Beli, he was forced to slay his foe with the horn of a deer. During Ragnarök, Freyr was again forced to confront his enemy without his sword, and perished as a result.

Though alluded to in other sources of Norse mythology, Freyr’s fate was first described in detail in the Völuspá of the Poetic Edda. Told through the narration of a völva, the prophecy foretold his death at the hands of the giant Surtr (also, as here in the Bellows translation, Surt):

Surt fares from the south | with the scourge of branches,
The sun of the battle-gods | shone from his sword;
The crags are sundered, | the giant-women sink,
The dead throng Hel-way, | and heaven is cloven.
Now comes to Hlin | yet another hurt,
When Othin fares | to fight with the wolf,
And Beli’s fair slayer | seeks out Surt.4

While Freyr lacks a major presence in contemporary popular culture, he has nevertheless cultivated a legacy in the names of Nordic towns and farms. Sweden, Norway, Denmark, Belgium, and the Netherlands all have towns named after the Norse deity.