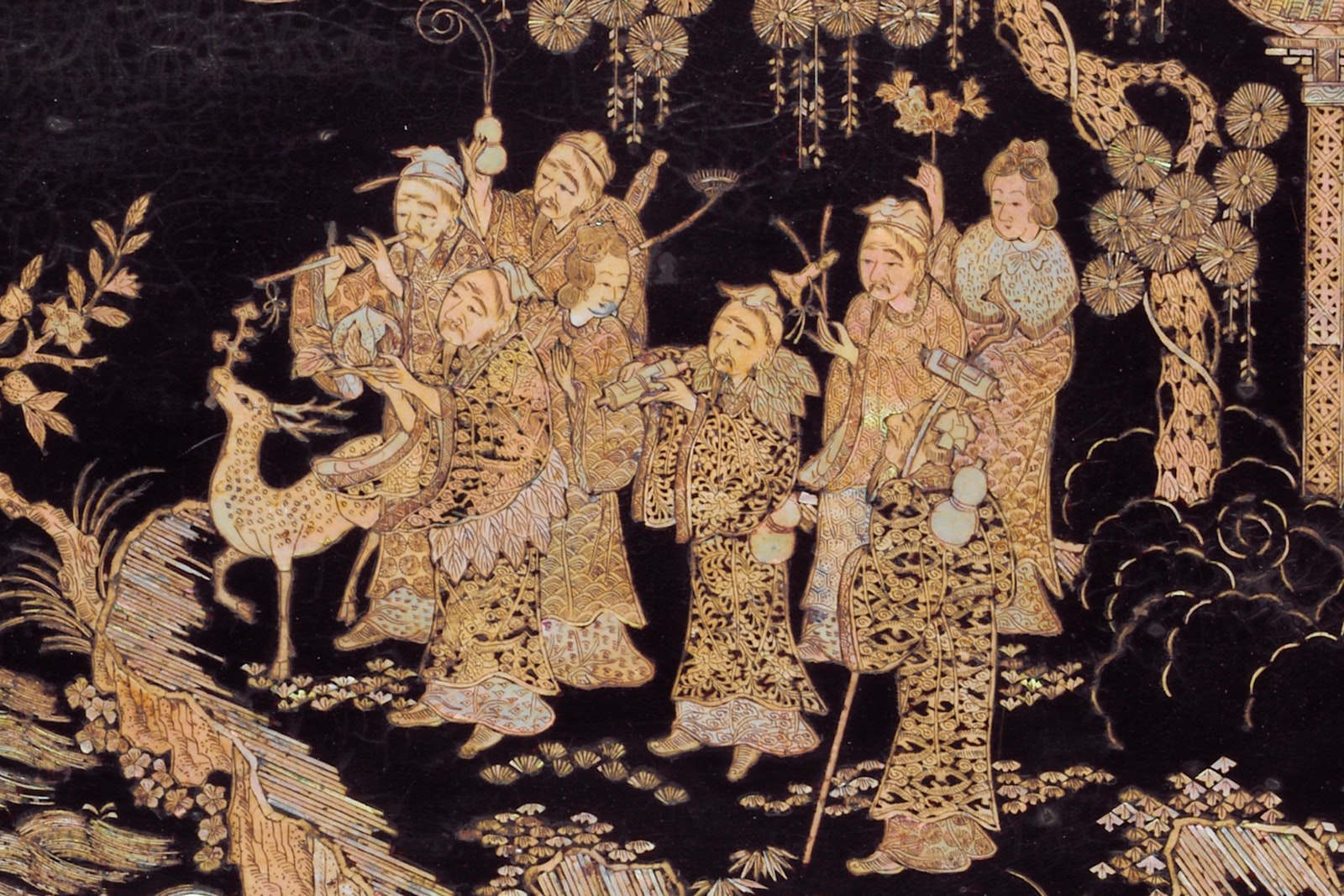 The Ba Xian (八仙), also called the Eight Immortals, are a group of legendary heroes of ancient times who fight for justice and vanquish evil, according to Chinese mythology. Popular during the Tang and Shang Dynasties, the Eight Immortals are said to live on a group of five islands in the Bohai Sea.

Although they have always been an important part of Chinese oral history, their stories were first recorded by the Ming Dynasty poet Wu Yuantai.

The Immortals are comprised of Cao Guojiu (曹國舅), Han Xiangzi (韓湘子), He Xiangu (何仙姑), Lan Caihe (藍采和), Li Tieguai (李鐵拐), Lü Dongbin (呂洞賓), Zhang Guolao (張果老), and Zhongli Quan (鍾離權). He Xiangu is the only woman of the group. Each of the Ba Xian have their own special object from which they draw their powers. This group is considered to be especially important figures in Taoism.

The Bā Xiān’s name is made up of the Chinese characters for “eight,” bā (八) and xiān (仙) which means “immortal” or “celestial being.” Their name is also sometimes translated as “the Eight Genies.”

The Ba Xian are popular subjects in art and have been depicted on everything from pottery to silk paintings. Even though they are occasionally represented in individual portraits, they’re most often drawn or painted as a full group. The men of the Ba Xian are usually accompanied by jade handmaidens. The best-known mural of the Eight Immortals can be found at the Eternal Joy Temple in Ruicheng, China. Each of the Ba Xian have defining characteristics or objects that distinguishes them from others.

A few of the Ba Xian are said to be related to powerful ancient Chinese officials and poets. Cao Guojie may have been a descendant of the Song dynasty general, Cao Bin, and younger brother of Empress Cao. He’s also has a mischievous younger brother named Cao Jingzhi (曹景植). Han Xiangzi is believed to be the grandnephew of the prominent Tang Dynasty politician and poet, Han Yu. And finally, He Xiangu was the daughter of a man from Guangdong, China named He Tai (何泰).

According to myth, the Ba Xian lived in the middle of the Bohai Sea on Penglai Mountain which was situated on a beautiful, paradise-like island. Only the Ba Xian were able to travel to the island since the water around it was “weak” and is unable to support the weight of ships. Although they were often depicted as a group in art, each of the Eight Immortals had their own lore and myths.

Cao Guojiu was once an official who served in the Imperial Court. His younger brother, Cao Jingzhi, was also a court official, but abused his position and was known for being a gambler and a corrupt official. Cao Guojie tried to make up for his brother’s grievances and used his own money to pay off his gambling debts, yet his younger brother was eventually formally charged with corruption of power. Cao Guojie was so embarrassed that he gave up his political career and retired to the countryside to study Taoism and eventually achieved immortality. He’s considered to be the patron “saint” of acting and theater.

One day, Han Xiangzi picked a blooming peony and showed his grand-uncle that he had developed the ability to change the color of the flowers. Realizing that he had been gifted with special abilities by Heaven, Han Xiangzi then decided to return to his home village where he met Lü Dongbin and Zhongli Quan who taught him about Taoism against his grand-uncle’s wishes. Han Xiangzi was considered to be musically gifted and carried around a magical flute.

Born with exactly with six hairs on her head, it was obvious that there was something special about He Xianggu since her birth. At age 14, a vision came to her in a dream that told her to gradually decrease her food intake and to begin eating powdered mica everyday so she could avoid death. She heeded the divine message and eventually ascended to Heaven. Her lotus was believed to have the ability to improve physical and mental health.

Lan Caihe was described as an intersex person, or a man who believed he was meant to be a woman. One day after getting very drunk, Lan left the mortal world by riding to heaven on the back of a crane.

Although he was one of the more-well known members of the Ba Xian, Li Tieguai had a short temper and was, therefore, one of the most disliked. Before he became an immortal, Li was a handsome man who took up Taoist studies under the guidance of Laozi, the founder of Taoism, who taught him how to leave his physical body and travel to Heaven. On one of these trips, Li Tieguai lost track of time and left his body for six days.

His wife, thinking that he was dead, cremated his body and buried the ashes. Li Tieguai was then forced to inhabit the body of a dying homeless man. Li Tieguai carried medicine in his gourd that could cure any illness and gave it to those who need it the most. He was seen as a champion of the needy and ill.

One of the most popular figures of the Ba Xian, Lü Dongbin was considered to be the leader of the Eight Immortals. He was once a beloved Tang Dynasty poet who was immortalized as a member of the Ba Xian after his death. Before he became an immortal, Lü Dongbin’s name was Lü Yán (呂巖), and underwent ten trials to prove to Zhongli Quan that he was worthy enough to become his disciple.

He was also associated with the culturally-significant story of “The Yellow Millet Dream.” In this legend, Lü Dongbin fell asleep at the stove while cooking a pot of millet. In his dream, he worked his way up to a lofty position in the Chinese government, married, got fired, and divorced over the course of 18 years. When he woke up, he was left feeling confused and empty. The dream was given to him by Zhongli Quan to help him realize the meaningless of material achievements in life. Lü Dongbin was a very romantic, sexual deity, but was prone to bouts of drunkenness.

Zhang Guolao was saidto have been a real-life occult alchemist who dabbled in necromancy. During his life, Zhang Guolao was something of an eccentric and was known to drink water from the petals of poisonous flowers, snatched birds out of the sky with his bare hands, and enjoyed traveling at least a thousand miles a day on the back of his trusty white mule. One day when he was visiting a temple, Zhang Guolao suddenly died and his body underwent rapid decomposition. But, just a few days later, he was seen alive and on a nearby mountain.

After many years of Taoist study, Zhang Guolao suddenly fell ill. Despite his wide knowledge of necromancy, he actually died this time and his body was found in the Zhongtiao Mountains. His disciples buried his body, but when they came back a few days later to pay their respects, they discovered his corpse had disappeared. It’s believed that after his final death, Zhang Guolao physically ascended to Heaven.

Considered to be one of the oldest of the Ba Xian, when Zhongli Quan was born, he emerged from his mother’s body in a shower of blinding lights with the ability to speak. He served as a prominent general of the Han Dynasty. His military exploits took him to Tibet where he learned Taoist teachings and devoted himself to meditation. During a meditation session, he materialized into a cloud of gold dust and ascended to heaven. Zhongli Quan carried a large fan that has the ability to revive the dead and materialize gold and silver out of thin air.

Even in modern times, the Ba Xian are popular subjects in art, literature, TV, and film. Although they’re not worshiped like other figures in Chinese mythology, the Eight Immortals are popular folk icons. The Jackie Chan movie, Drunken Master, is based off the myth of the Ba Xian and the group even appear in the animated series, Jackie Chan Adventures. The Eight Immortals also make an appearance in the X-Men universe to protect China from the evil mutant, Xorn. In the Marvel Comic book series, The Immortal Iron Fist, there are eight extra-dimensional kung-fu masters called the “Eight Immortal Weapons” (based off of the Ba Xian) that appear to protect the Earth in times of need.