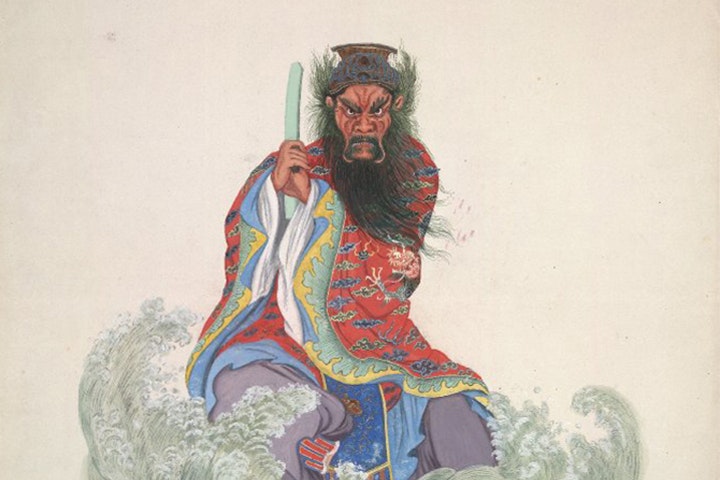 In Chinese mythology, Longwang (龍王) lords over the seas and is known as the “Dragon King.” He is a fearsome guardian deity who controls all dragons, sea creatures, the oceans, and the weather. Although he has a temper, Longwang is seen as a symbol of good fortune and the mythological embodiment of the concept of yang. He is most popular among Chinese coastal communities.

Longwang’s name is comprised of the Chinese characters for “dragon,” lóng (龍), and “king,” wáng (王). He is sometimes referred to as Sìhǎi Lóngwáng (四海龍王), meaning the “Dragon King of the Four Seas” or simply as Lóngshén (龍神), or “Dragon God.”

Longwang has two forms: his zoomorphic dragon form and his fierce, warrior lord, human persona. As the latter, Longwang dresses in elaborate royal robes and has blazing red skin, signifying his ferocity. In his animal form, Longwang’s scale color varies based on the artist, but he is typically drawn in the Chinese-dragon style with a serpentine body, sharp horns, a hair-like beard, and large claws. In ancient texts, Longwang is described as having the “head of a horse and the tail of a snake, with wings on its sides.”

Longwang has four brothers who presides over the Northern, Eastern, Southern, and Western seas. Áo Guǎng (敖廣) rules the Eastern Sea; Áo Qīn (敖欽) controls the South Sea; Áo Rùn (敖閏) governs the West Sea; and Ao Shun (敖順) lords over the North Sea. According to legends, Longwang has thousands of children, including the young girl, Sagara, who achieves buddhahood in The Lotus Sutra. He is still considered to be the symbolic father of all the early Chinese emperors.

Longwang was known for his fierce and aggressive personality and served as a foil to the more benevolent-minded sea goddess, Mazu (媽祖). Longwang answered to no one except the Jade Emperor (玉皇) himself. He lived in a beautiful sea palace with his brothers and regularly feasted on a diet of precious gems and pearls. The brothers communicated telepathically and could understand one another perfectly without speaking a single word.

After unknowingly gifting the Buddha a gem while he was disguised as a beggar, Longwang’s daughter, Sagara, was taken under the Buddha’s wing and taught the dharma. Sagara spent a few years spreading the word of Buddha as his disciple. She then made it her goal to bring the teaching of the Buddha to her father. Despite her many efforts, Longwang refused to adopt the new teachings, so Buddha himself made a trip down to Longwang’s ocean palace and ultimately taught him the dharma personally. Once he finally accepted the Buddha’s teachings, Longwang was granted godhood and adopted the concepts of the dharma into all of his undersea affairs.

#The Ministry of Waters

The Four Dragons and their brother, Longwang, were a part of a brotherhood of gods that presided over the oceans and rivers of the Earth. The Four Dragon Kings partnered with a group of four freshwater dragons who controlled the rivers, springs, and lakes. Together, they ruled over all weather and water on the planet—with Longwang at the helm.

Longwang is still most popular in Chinese coastal communities and his name is invoked in times of drought. It’s not uncommon to see temples dedicated to him along beach-side roads. Longwang’s birthday falls on the thirteenth day of the sixth moon of the Lunar Year and is celebrated with sacrifices and parades. The popular dragon boats are modeled after his likeness and are meant to represent his fiery nature. Longwang plays an important role in ancient Chinese literature like the Fēngshén Yǎnyì (封神演義) or The Investiture of the Gods, The Lotus Sutra, and Journey to the West.