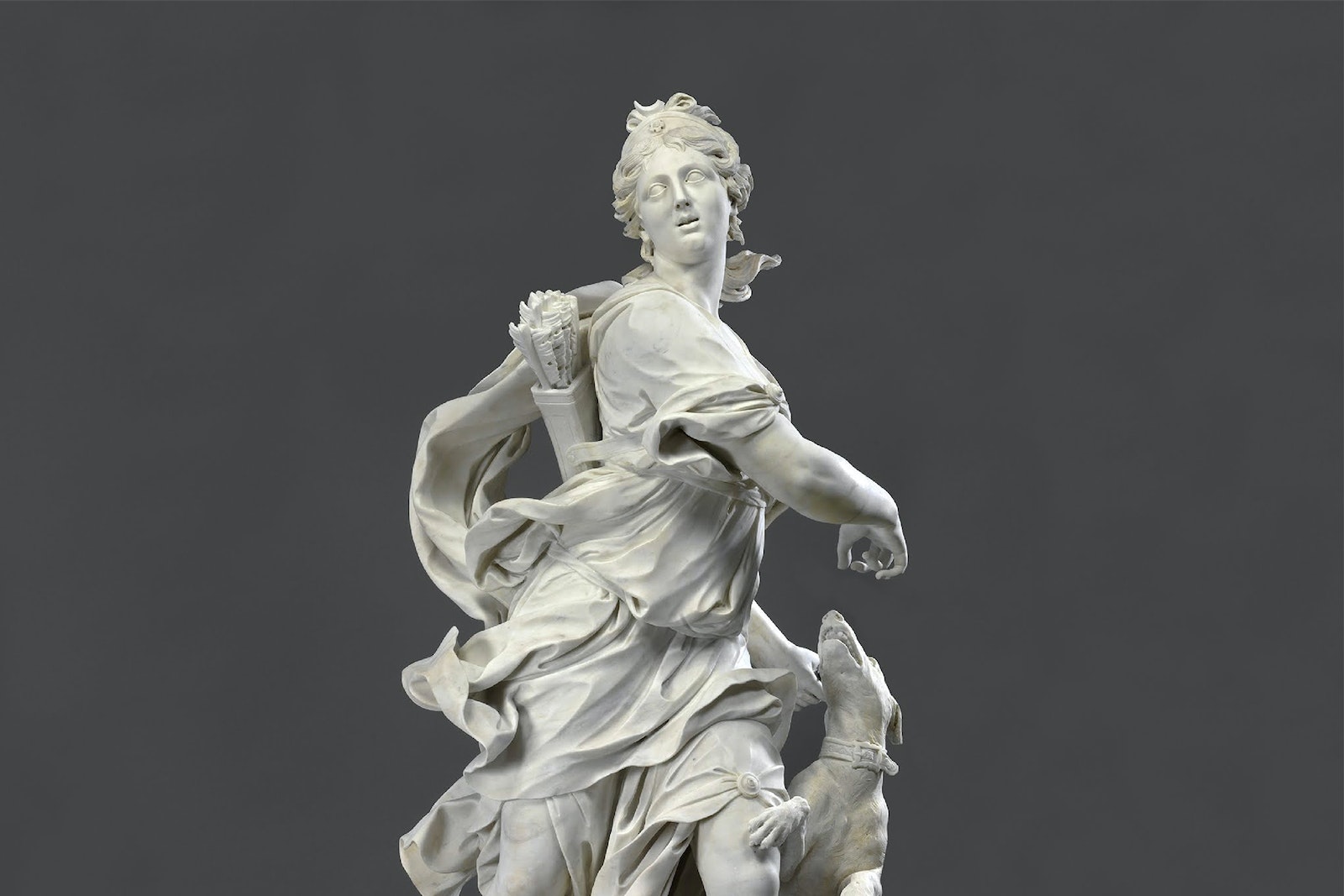 Diana was the Roman goddess of the hunt, unspoiled nature and the animals that inhabited it. Shunning the company of mortals and gods, Diana preferred the solitude of the forests and kept the company of nymphs and woodland creatures. A master of the bow, Diana was the greatest of all hunters. A maiden for all her days, she preserved her virginity despite the advances of potential lovers and suitors. Diana was also associated with the underworld and liminal zones—the boundaries separating the living from the dead and the wild from the civilized. Though she was a Roman goddess, much of Diana’s mythology and personality originated elsewhere. Diana was heavily based on Artemis, the Greek goddess of hunting and nature.

Originally worshipped by the pre-Roman people of Italy, Diana eventually took on a more Hellenized form. She was incorporated into the Roman pantheon sometime during the sixth century BCE. In Roman religion, Diana was known as Diana Triformis, or a goddess of three aspects: the hunt, the moon, and the underworld. She was also a member of a divine triumvirate alongside Egeris, the water nymph, and Virbius, the woodland god. Adored by males and females alike, Diana was seen as a patron of hunters and protector of virgins.

The name “Diana” (known in Old Latina Jana, and in Late Latin as Diana) was rooted in the Proto Indo-European dyeu-, meaning “to shine” or “to give off light.” Derivatives of the same root included the Greek word theos, the Latin word deus, the Persian word daiva, and the Sanskrit word deva, which all translated as “god.” Other derivatives were the Latin word dies, meaning “day,” and diurnal, meaning "daylight." Diana’s elementary association with divinity and daylight suggested her long history as an Italian goddess, dating back to at least the first millennium BCE, if not farther.

Diana was known by a number of epithets over the centuries. For her tripartite personality, she was known as both Diana Triformis and Diana Trivia. She was also called Diana Caelus, or “Heavenly Diana,” a common epithet amongst the members of the Roman pantheon. Finally, she was Diana Nemorensis, or “Diana of the Wood.” This particular incarnation of the deity represented the Italic version of Diana, the figure Hellenized by the Romans and influenced by Artemis.

Wielding a bow and golden arrows, Diana roamed the wilderness seeking adventure and hunting game. She usually wore a chiton, a short tunic typically worn by males, because it allowed her to range freely throughout the woods. Diana also wore a cloak, boots, and a belt with a jeweled clasp. In some traditions, she was said to wear purple raiment.

Thought she often preferred solitude, Diana would occasionally seek the companionship of forest and water nymphs, such as her partner Egeris.

Diana was the daughter of Jupiter, who was king of the gods, and Leto (or Latona, in the Roman sources), an ancient Titan. Her twin brother was Apollo, a deity associated with wisdom, rationality, and the order of law. Diana had a huge number of half brothers and sisters; these included Mars, the god of war, Vulcan, the god of the forge, and Juventus, a god of youth and adolescence.

Diana’s mythic corpus was borrowed largely from stories of Artemis told by the Greeks. Unlike other Roman deities, who largely disappeared after the rise of Christianity, Diana persisted in the folk culture of medieval and early modern Europe.

#The Making of Diana

Diana was conceived from the coupling of Jupiter and Leto. The pair had fallen in love and married, but as often happened with Jupiter, he soon fell out of love and found another. His new wife was his sister, Juno, the goddess of family, marriage, and children. Juno was a jealous partner who harbored grudges against her husband’s lovers and their children. When she discovered Leto’s pregnancy, she resolved to prevent the birth as best she could, even going so far as to summon a monstrous sea creature called Python to hunt her down.

Leto was forced to flee from island to island, seeking refuge and a community that would protect her. Apollo advised his mother from within the womb, telling her to seek the small and mysterious island of Delos. Shortly after settling on the island, Leto found herself in the throes of labor. Realized that Leto was about to deliver her babies, Juno inflicted one final cruelty: she imprisoned Lucina, the goddess of childbirth and midwifery, forcing Leto to give birth alone.

For days, Leto suffered the agonies of childbirth. Some nymphs heard her suffering, and came to her assistance, allowing her to finally give birth to the children. Leto delivered Diana first. As soon as she emerged from the womb, the precocious Diana took on the role of midwife and assisted Leto in delivering her brother. Apollo came into the world wrapped in white and clutching a bronze sword. The twins were natural archers, and fiercely protective of their mother. Together, Apollo and Diana hunted the terrible creature known as Python that had so pursued their mother. Eventually, they managed to lure the creature to Delphi—and its doom. They peppered the beast with arrows until it was no more. Ultimately, the twins were bound for different paths—Apollo for the bustle of civic life, and Diana for the solitude of the forest.

One of the most popular (and complete) myths involving Diana was told by the Roman poet Ovid in his first century masterwork the Metamorphoses. The story centered on the fate of young Actaeon, a talented hunter who led a pack of hounds into the woods in pursuit of stags. The hunt had gone well and the day had been hot, so Actaeon brought the hounds to a cool spring in a clearing of the dense wood. Unaware of the intruders in her midst, Diana bathed in the cool spring waters:

Down in a vale with pine and cypress clad,
Refresh’d with gentle winds, and brown with shade,
The chaste Diana’s private haunt, there stood
Full in the centre of the darksome wood
A spacious grotto, all around o’er-grown
With hoary moss, and arch’d with pumice-stone.1

When Actaeon stumbled onto the scene, he happened to spy Diana’s nude form in the waters. Angry, surprised, and embarrassed all at once, Diana reached for her bow before thinking better of it and splashing Actaeon with water from the pool:

Surpriz’d, at first she would have snatch’d her bow,
But sees the circling waters round her flow;
These in the hollow of her hand she took,
And dash’d ’em in his face, while thus she spoke:
‘Tell, if thou can’st, the wond’rous sight disclos’d,
A Goddess naked to thy view expos’d.’2

The splash was no innocent or flirtatious gesture. On the contrary, the water was enchanted to transform Actaeon into a stag. The metamorphosis happened in a flash. Though Actaeon lost his human functions and sprouted hair and horns, he still retained his identity. Tragically, Actaeon’s hounds caught his new scent and attacked him. Actaeon fled as quickly as he could, but the hounds were too quick for him; it was not long before they brought their master down.

#Diana in Roman Religion and Beyond

In Roman religion, Diana was worshiped as a triple goddess: goddess of the hunt, goddess of the moon, and goddess of the underworld. She was heavily associated with liminal zones, or crossroads, and was thought to reside in the sacred grove next to Lake Nemi, located a few miles outside of Rome. The site was a center of worship where the pious offered devotions to Diana Nemorensis, or “Diana of the woods of Nemi.” Diana worship was also observed at her massive temple on the Aventine Hill, which was allegedly built in the sixth century BC by the legendary King Tullus Hostilius. The temple stood near the pomerium of Rome. Note that the pomeria were sacred (and liminal) boundaries, where the city (urbs) of Rome ended and the territory (ager) of Rome began.

Diana was celebrated during the festival of Nemoralia, another reference to her sacred grove in Nemi. The festival was originally held in Nemi, but soon spread to other parts of Roman territories as the empire grew. The festival spanned three days and nights, and featured torch-bearing worshipers offering devotions to Diana in the form of tokens, which were left in sacred wild places—in bodies and water, groves, and woods.

Unlike many other deities in the Roman pantheon, Diana was adapted by Christians and incorporated syncretistically into the folk beliefs of peasant communities. The Italian historian Carlo Ginzburg described these worshippers as belonging to the “Society of Diana,” and suggested that they were labelled as witches in early modern Europe.

Diana worship continues to this day in both modern Wicca and Dianic Wicca. In these female-centric traditions, she is regarded as a nature goddess and revered as a source of wisdom, fertility, and regeneration.

The goddess has survived, too, in the form of the Artemis or Diana archetype—a young girl, often withdrawn from life, who bravely transgresses moral and physical boundaries. Drawing from a pool of inner resiliency, the girl fights fiercely for what is right. Katniss Everdeen, the heroine of Suzanne Collins’ Hunger Games novels, is one recent example of this archetype in action.