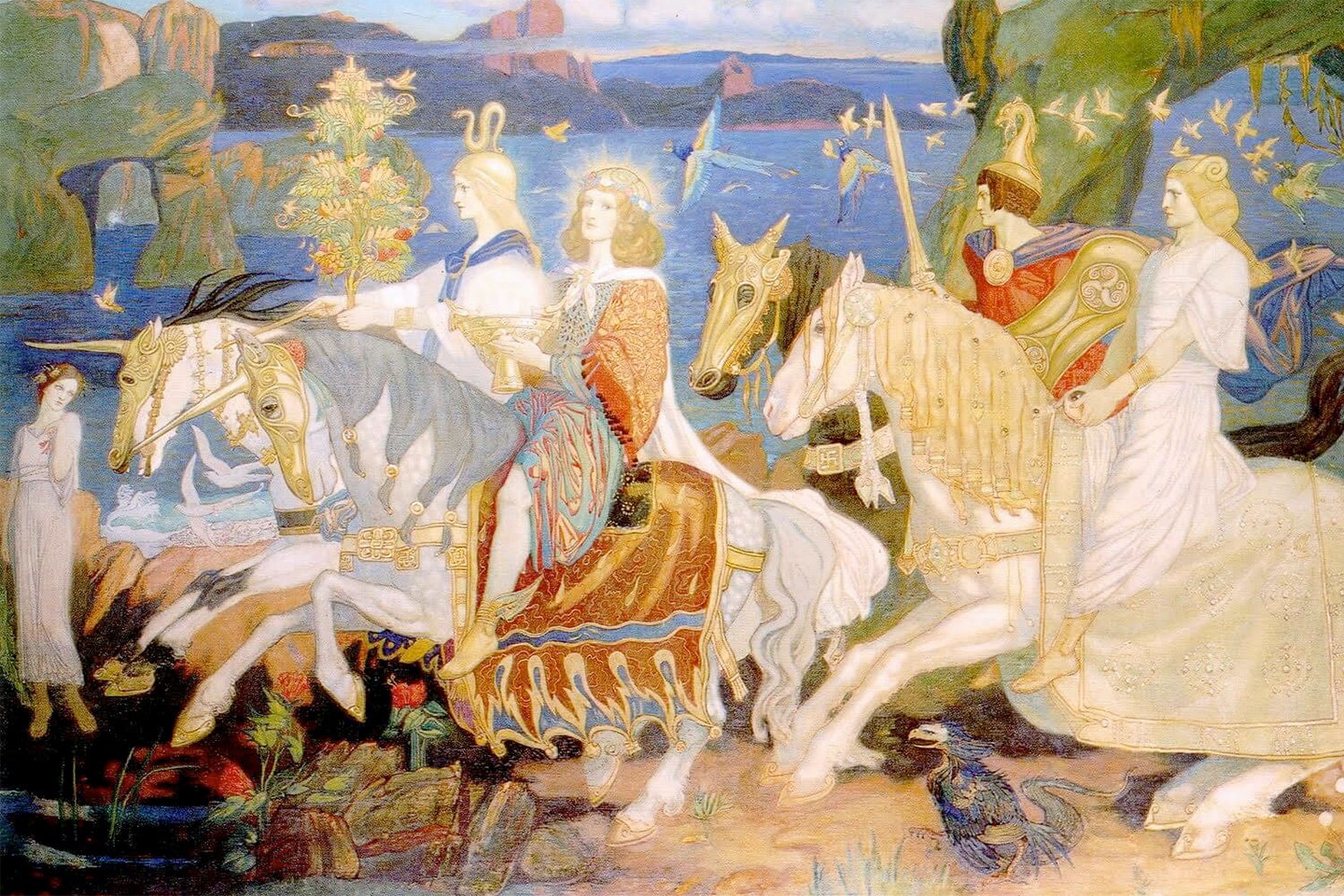 The Dagda was chief of the Tuatha dé Danann, the foremost of the Irish ancestral gods. Highly skilled and wise beyond measure, he was not only the god of life and death, but of seasons, agriculture, fertility, magic, and druidry as well. He wielded three sacred treasures: a cauldron of plenty, a club of life and death, and a harp that controlled men and seasons alike.

His children were plentiful, as were his lovers. His dwelling place was Brú na Bóinne.

The Dagda (Gaelic: An Dagda) was a title, meaning “the good or great god,” that reflected his mastery over many skills rather than the fortitude of his character. This Gaelic name was first derived from the Proto-Indo-European Dhagho-deiwos, or “shining divinity." As the language evolved into Proto-Celtic, the root morphed into Dago-deiwos. It is from the word Dagos that the Dagda’s name receives its two meanings: “shining” in relation to daytime, or “good” as in skilled.

Beyond the Dagda, his many titles included Eochaid Ollathair (Horseman or All-Father), Fer Benn (the Horned Man), Ruad Rofhessa (Lord of Great Knowledge), Dáire (the Fertile One), and Cerrce (Striker), among others.

From Murias was brought the Dagda’s cauldron. No company ever went away from it unsatisfied.
Cath Maige Tuired, trans. Elizabeth A. Gray

As the “great god,” the Dagda possessed immense skill that gave him dominion over a wide range of fields. He was not only the god of life and death, but of fertility and agriculture as well. The Dagda possessed many items that granted him further abilities. He could set the seasons to order with a strum of his harp, slay or resurrect a man with his club, or provide a generous feast with his cauldron. The Dagda was also a druid, and as such had mastery over all things magical and mystical.

The Dagda was described as a giant of a man, oafish in both demeanor and attire. His beard was long and unruly, and he wore a woolen cloak about his head. His clothing never fit right, often exposing his stomach and buttocks. Nevertheless, these faults did little to distract from his good looks.

Some scholars have theorized that his gruff appearance came from the Christians who recorded Irish myths and traditions; these early historians may have wished to make the Dagda appear comedic and foolish in contrast to their own deity. Even in these portrayals, however, the Dagda was still described as wise, witty, and wily on a consistent basis. Such versions also allowed him to remain a druid schooled in magic, art, and military strategy.

The Dagda often carried three sacred relics with him that defined several of his many talents:

In additions to these items, the Dagda owned two pigs—one always growing, the other always roasting—and an orchard that bore perennial sweet fruit.

The Dagda’s primary dwelling was at Brú na Bóinne, a series of Neolithic mounds on the banks of the River Boyne in County Meath. These ancient mounds were constructed around 3200 BCE, and as such are older than famous landmarks such as Stonehenge and the Great Pyramids. A mound called Newgrange aligned with the rising sun during winter solstice, representing the Dagda’s significance as lord of seasons and his mastery over day and night.

As chief of the Tuatha dé Danann, the Dagda fathered many children, chief among them being Aengus, Brigid, and Midir. His lovers were plentiful, but the most notable were his spouse, the fearful Morrigan, and the river goddess Boann.

The Dagda’s parentage varied from tale to tale. In some, his parents were Elatha and Ethniu (in some tales, the latter was the daughter of King Balor); in others, his father was Badurn. His brothers were often listed as Nuada, king of the gods, and Oghma, a great champion. The Dagda and his brothers may have represented a god in three persons, as they often shared similar attributes and carried titles such as chief and king at the same time. In many myths, the brothers coexisted in a triumvirate with Nuada serving as king, the Dagda as chief/advisor, and Oghma as champion.

The Lebor Gabála Érenn laid out the coming of the Tuatha dé Danann, the fifth group of settlers to arrive in mythical Ireland. This group hailed from four cities north of the Emerald Isle, where they had learned the arts and sciences of their time, including magic. At this time, the Dagda was their chief. Though he did not hold the title of king, he was consulted and respected by many as if he was one.

The Dagda fell for Boann, goddess of the River Boyne and wife of Elcmar, a judge of the Tuatha dé Danann. In order to court her, the Dagda sent Elcmar away to High King Bres. With her husband out of the way, Boann soon fell pregnant with the Dagda’s child. To prevent Elcmar from seeking retribution against the child, the Dagda held the sun in place for nine months, allowing Boann to carry and give birth to the child in a single day. The Dagda then gave the child to his son Midir to raise, and the boy became Aengus, god of love and poetry.

In time, Aengus grew to manhood, and the Dagda helped him trick Elcmar out of his rightful home at Brú na Bóinne. Using a carefully worded ploy befitting the gods of wisdom and poetry, they asked Elcmar to allow them to dwell there for “a day and a night.” This Old Irish phrase had two meanings: a literal day and a night, and all days and nights. In agreeing to their request, Elcmar had unwittingly given his home to his enemies for eternity. Soon after, the Dagda and Boann assisted Aengus in his quest to find the girl haunting his dreams.

Some time later, while Aengus was away, the Dagda distributed his land among his many children. Upon his return, Aengus discovered that his father had saved nothing for him. Using the same careful wording through which they had gained their home, Aengus tricked the Dagda into passing Brú na Bóinne on to him.

#The Second Battle of Moytura

Upon arriving in Ireland, the Tuatha dé Danann consolidated power by eliminating or conquering the land’s earlier settlers. The most powerful of these groups was the Fomorians, a monstrous race ruled by the cruel king Balor. Knowing conflict with the Fomorians was inevitable, the Dagda made careful plans to trick them out of key resources, including their sheep. On Samhain, he went to his wife, the Morrigan, goddess of battle and of death, and found her bathing. After they made love, she prophesied the coming battle: they would be victorious over the Formorions—at a price.

At long last, both sides met at Moytura, in County Sligo, where they fought for control of Ireland. During the fierce battle, both Balor and the Dagda’s brother Nuada were laid low. The Dagda himself was also mortally wounded by Cethlenn, wife of Balor. During the battle, the Dagda’s magic harp was stolen, though it was ultimately recovered later. After the battle, the Dagda returned to Brú na Bóinne, where he succumbed to his injuries and was laid to rest in the mounds. At his time of death, he had already ruled for seventy or eighty years, depending on the source.

Like many of the Tuatha dé Danann, he could still be consulted by those visiting the fairy mounds, as well as those who drifted into the perilous Otherworld.

While not as prominent as Brigid or Lugh in Celtic mythology, the Dagda was not without his counterparts. Wise gods wielding powerful clubs and cauldrons of plenty were found throughout both France and Great Britain. Like the Dagda, the Gaullish Sucellus carried a hammer alongside a cup or barrel and ruled over agriculture. Dorset’s Cerne Abbas Giant, a nameless giant wielding a club with an erection, may also have represented one of the Dagda’s counterparts.

The Dagda was also compared to the Germanic Odin and the Roman Dis Pater, as they bore certain similarities to him.

The Dagda has appeared in works spanning the entirety of pop culture.